Trump shredded the rulebook and any sense of decorum. 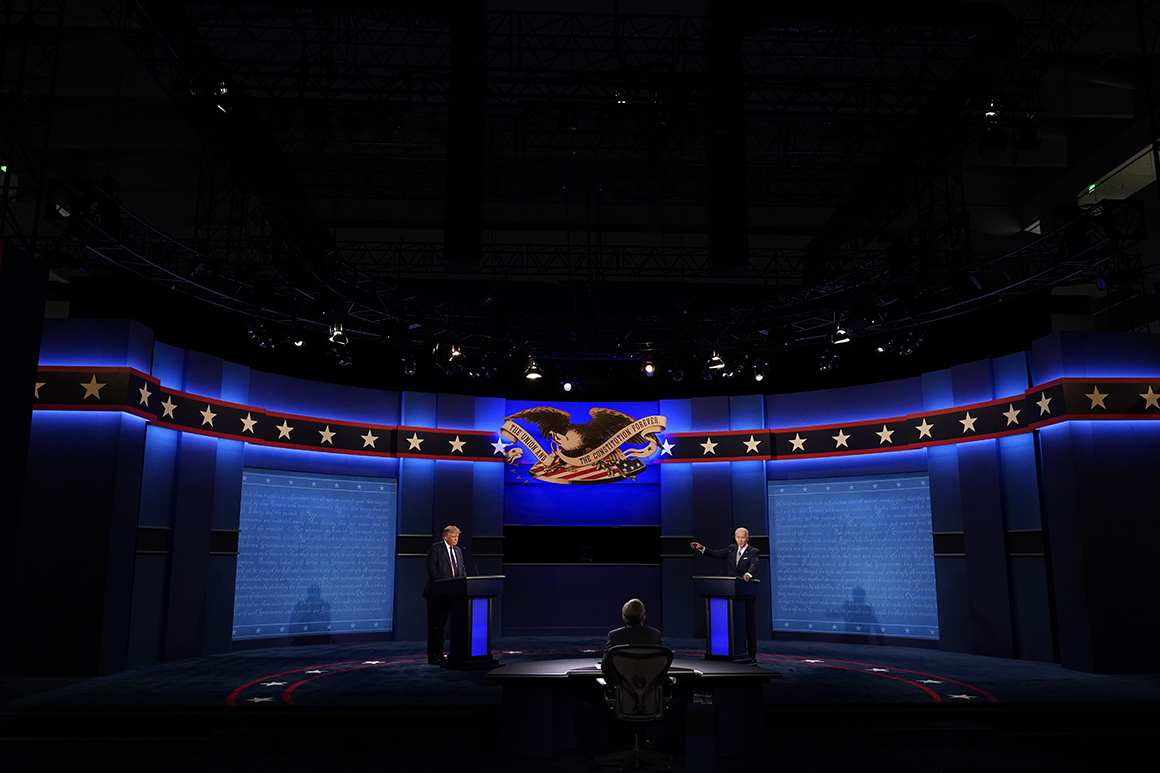 At frequent intervals on Tuesday night, the natural human reaction—lower the sound, wince and look away—took over, and the first presidential debate of the 2020 general election became nearly unwatchable.

Those who did persist in watching were rewarded, in a perverse way: They witnessed history in the making. The proceeding was an epic spectacle, a new low in presidential politics, a new high watermark in national shame.

The stain will be visible for many years to come. It will serve as a reminder of the night the dam broke, and currents of contempt that have been building in public life for many years flooded the stage with tens of millions of Americans viewing President Donald Trump, Democratic nominee Joe Biden, and an overwhelmed moderator on live television.

General election debates—which have been a recurring feature of elections since 1960 and an institutional fixture since 1976—had been until Tuesday one of the few dimensions of the nation’s public life to preserve a certain aura of solemnity. That changed in the opening moments of the Cleveland debate.

The 90-plus minutes that followed were an almost perfect distillation of the politics of insult, indignation, interruption, and irrelevancy that are commonplace on talk radio, on cable news, on Twitter.

There is no mystery why this happened. Trump plainly arrived to shred the official debate rules, and shed any pretense of decorum. At numerous points, his honking interruptions blared without interruption. So did his putdowns, including mocking Biden’s performance in college 56 years ago—“You graduated either the lowest or almost the lowest in your class,” before adding, “There’s nothing smart about you, Joe.” He also brought up Hunter Biden’s drug problems and inaccurately said he received a dishonorable discharge from the Navy.

Trump’s barrage left Biden with a choice. He could draw a contrast by deferring to the rules and trying to appear patient and polite. He did that some of the time. Or he could try to embrace the spirit of the evening in what often sounded like a saloon argument, at the moment when the bartender is trying decide whether things are about to turn physical and he should call the cops.

“Will you shut up, man?” Biden challenged Trump, before lamenting, “This is so unpresidential.” Biden’s most vivid noun of the evening was clown. “Folks, do you have any idea what this clown’s doing?” he asked the audience. Later, as moderator Chris Wallace of Fox News tried with scant success to curb Trump’s speaking, Biden said, “It’s hard to get a word in with this clown.”

As the debate ended, Wallace observed with a rueful half-smile, “It’s been an interesting hour and a half.”

No need to be priggish about things. In some ways it can be entertaining to see politicians drop all pretense and start hurling their own waste at each other like primates at the zoo. But the intensity and unrelenting nature of the rudeness quickly ceased to be interesting and became simply depressing. In part this is because amid the barrage there were only a few passages of sustained coherence, in which a genuine and consequential disagreement between the candidates was actually illuminated.

Sure, it is easy to make fun of civics-class pieties about how the election ultimately belongs to the voters, and how America as the oldest democracy serves as an example to the world. But aren’t those maxims supposed to be at least kind of true?

It is hard to imagine how the evening could have been more disrespectful to voters, or a more embarrassing glimpse into the state of American political culture at moment when the country’s reputation in the world is already under severe challenge. Cumulatively this made the debate simply uncomfortable, like accidentally opening the office supply closet and seeing a naked colleague—just avert your gaze and walk away.

“That was a hot mess, inside a dumpster fire, inside a train wreck,” CNN’s Jake Tapper said on air, shortly after the candidates left the stage. “It wasn’t even a debate—it was a disgrace.”

Come now, the debate must have had some redeeming qualities? There were some, arguably, if one squints through the haze.

Biden and Trump offered genuinely different worldviews of how to manage the coronavirus pandemic. Trump argued that he is better at managing competing imperatives of public health and economic recovery, while Democrats are too quick to urge shutdowns at the expense of jobs and people’s emotional well-being, without making rational distinctions between older and sicker people who are at highest risk, and younger people who are not.

Biden said the economy can’t recover until businesses get more financial help to reopen safely, and said Trump is exerting so much political pressure on the public health agencies that people can’t trust the government’s own pronouncements. He said the economic effects are exacerbating inequalities, with the rich generally doing fine even during the pandemic and many service workers already at the economic margins facing years of distress.

For the most part, however, even policy discussions descended into guttural sentence fragments that didn’t add up to anything coherent. When Trump taunted that Democrats were in the grip of the left—“Your party wants to go socialist medicine”—Biden noted that he prevailed over candidates like Senator Bernie Sanders, who wanted to end private health insurance, and that he has his own energy plan that is different than Alexandria Ocasio-Cortez’s “Green New Deal.” But then Trump simply switched his taunt: “You just lost the left! You just lost the left!”

In one section of the debate Trump argued that Biden is so weak on crime that, “It’s crazy. He doesn't want to say law and order. Had can't. He'll lose the radical left supporters and once he does that it's over with.” But in another section he said Biden will underperform with African-Americans because of his advocacy of the 1994 crime bill and for complaining about criminal “super-predators.”

Consistency wasn’t the point. Pulling Biden, Wallace, the sponsoring Commission on Presidential Debates, and everyone watching to the level of disruptive chaos where Trump has thrived in the past likely was the point.

Having reached that point, it’s not clear where to go in three remaining debates—a debate between Vice President Mike Pence and Democrat Kamala Harris next week, and two more Trump-Biden encounters later in October. It is hard to imagine the next debates being more debased and debasing than this one. It’s also hard to see what dynamics exist in contemporary American politics to coax them to a higher level.