The government’s evidence that Ethan Nordean ordered violence at the Capitol is “weak,” the judge says. 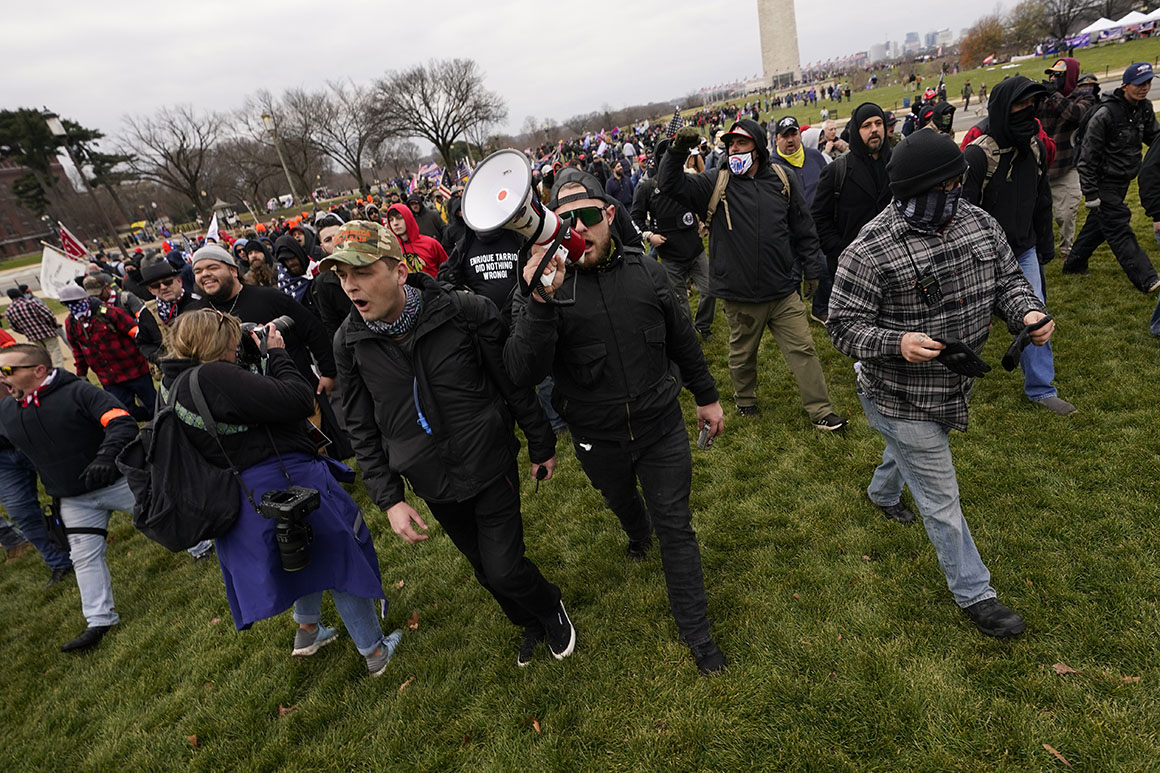 A federal judge in Washington has ordered the release of an alleged Proud Boys leader after declaring that the government had presented only “weak” evidence tying him to specific acts of violence and property damage during the Capitol riot.

Chief U.S. District Court Judge Beryl Howell also noted that prosecutors had retreated from some of their claims about Ethan Nordean, 30, including that he’d directed Proud Boys members to split into different squads in order to attack the Capitol from varying entrances.

“That’s a far cry from what I heard today. The government has backtracked,” Howell said during a two-and-a-half hour hearing Wednesday.

“There’s no allegation that the defendant caused injury to any person. ... He never personally caused damage to any particular property,” the judge said. “He was a leader of a march down to the Capitol. Once they got there, it is not clear what leadership role this defendant took at all to people inside the Capitol. ... The death of evidence about his direction is significant here.”

Howell called the issue of whether Nordean should be detained a “close case,” and she said she was disturbed by his rhetoric, especially his lack of remorse following the Jan. 6 violence.

“These are ominous statements,” said the judge. “He indisputably participated in this assault on the Capitol in which some people lost their lives, including a police officer.”

Howell ordered that Nordean be released to home detention with GPS monitoring in the Seattle area, where he lives. He’ll be permitted to return to Washington, D.C., only for court hearings and, with permission, to meet his lawyers.

Howell said there was no doubt, based on videos, that Nordean gathered with other members of the Proud Boys outside the Capitol, cheered them on with a bullhorn as they marched, and that he entered the Capitol illegally. “He wasn’t just caught up in a mob. He pre-planned,” she said.

However, prosecutors have argued that Nordean’s actions, like speaking to another Proud Boy shortly before he broke a Capitol window, demonstrated that he was directing members of the group to commit crimes.

“This was an intended act,” Assistant U.S. Attorney Jason McCullough said, adding that Nordean’s repeated invocation of rhetoric about “1776” was not merely chatter.

“This was not just an affection for three-corner hats and saltwater taffy. It was an interest in bringing about violent action,” the prosecutor declared.

However, Howell again questioned the strength of the government’s case. “Evidence the defendant directed people to break windows to get inside the Capitol is weak, to say the least,” she said.

The judge said the government might eventually be able to prove Nordean ordered violence, perhaps with testimony from others charged in the riot who choose to cooperate, but at the moment the government had little beyond the theory and his history of inflammatory talk and social media posts, which she called “offensive in the extreme.”

The decision was a blow to prosecutors in one of the highest-profile cases to emerge from the Jan. 6 insurrection. Nordean, per the government, was a senior member of the Proud Boys’ hierarchy — a member of its “council of elders,” per McCullough — and someone prosecutors said was a significant driver of the events that led to the violent takeover of the Capitol.

“Ethan Nordean would, by his presence on Jan. 6, command a certain degree of authority,” McCullough said.

The prosecutor repeatedly pointed to Nordean’s associations with others arrested during the riot, like Dominic Pezzola — one of the first to breach the building by shattering a window with a police riot shield — and William Chrestman, who is charged with threatening to assault police officers.

But when pressed by Howell, prosecutors presented no evidence that Nordean specifically directed those violent actions. They also declined to rebut Nordean’s claim that his cell phone was dead for much of Jan. 6 and downplayed the significance of the claim that Nordean saw his Proud Boys role elevated after the arrest of the group’s leader, Enrique Tarrio.

Nordean, McCullough emphasized, was “nominated” to receive ”war powers” in Tarrio’s absence, but was not necessarily granted them.

Nordean’s defense also challenged a series of factual claims in the government’s filing opposing release, including suggestions he was preparing to flee and that he used sophisticated radio gear to communicate with other Proud Boys during the assault.

The prosecution suggested that during the riot Nordean used a radio he bought from Amazon, but the defense submitted records showing that radio wasn’t delivered to him until the day after the storming of the Capitol.

Prosecutors also had difficulty proving that Nordean presented a flight risk based on the discovery of a passport belonging to his wife’s ex-boyfriend. Though the government says the passport was discovered on a bedroom dresser, Nordean’s attorney rebutted that claim, noting his wife regularly kept it in a jewelry box on the couple’s nightstand and that the two men don’t look anything alike.

“The government has made repeated factual claims about Ethan’s actions and then backs away from them without any support,” Nordean’s attorney Nicholas Smith said. “It’s just not there.”

Smith said it was troubling that the government would seek criminal charges based in large part on Nordean’s role leading a march and suggested the approach amounted to guilt by association.

“I challenge the government to come up with a single precedent with such a sweeping theory of aiding and abetting liability,” the defense lawyer said. “Marching with a group of people would implicate every single person in the crowd for a felony offense, but the government is not charging everyone in the crowd. ... Vague claims about taking back the government and that sort of thing is not an aiding-and-abetting offense.”

McCullough disclosed at the outset of Wednesday’s hearing that a grand jury indicted Nordean earlier in the day on charges similar to those in a criminal complaint used to arrest him last month. They include obstruction of a Congressional proceeding, aiding and abetting depredation of government property, and lesser charges.

Now that Nordean has been indicted, his case will be assigned to a judge at random for further proceedings. Howell said the government is free to make its case to that judge that Nordean is so dangerous that he should be kept in jail as he awaits trial.

“My word may not be the last word on this,” she said.