The unrest on American streets is complicating life for those representing the country abroad, current and former officials say.

If the United States were a foreign country, American diplomats would follow a familiar playbook.

In public, they’d express “concern” about the unrest in the country– maybe even “deep” concern. They’d call on “all parties” to engage in “dialogue” to resolve disputes. They’d insist the government allow for “peaceful” protests and urge “restraint” by security forces. They’d denounce police attacks on journalists. They might even offer to mediate between the feuding parties.

In classified cables sent back home, they’d question the stability of the government. They’d look for signs of fractures among the ruling elites, and ponder whether the head of state would be willing to accept defeat in the upcoming election. Some would gather information about potential human rights violators. They’d elevate security at their embassy, mull issuing a travel warning and dust off contingency plans for evacuating themselves and other U.S. citizens.

But America is not a foreign country. It is home. And for U.S. diplomats, that means life at the moment is very strange.

Widespread protests in the United States, sparked by the death of George Floyd, a black man in police custody, have laid bare America’s racial and economic fissures and its extraordinary political polarization. The unfolding scenes of chaos and violence, current and former diplomats say, are making it much harder for America’s representatives abroad to do their jobs.

“Our diplomats are accustomed to expressing concern about other countries’ human rights violations. Today they’re being asked by foreign governments to explain our own,” said Molly Montgomery, a former Foreign Service officer whose postings included Afghanistan and Bosnia-Herzegovina. “For many diplomats who joined the Foreign Service to promote American values like democracy, the rule of law, and human rights abroad, this is a moment of great sadness and deep soul-searching.”

The sight of U.S. police and other security forces tear gassing and beating up protesters are playing on television screens across the planet, offering irresistible fodder for foreign adversaries who’ve long accused the U.S. of hypocrisy. Never mind human rights records that are orders of magnitude worse than anything yet seen on America's streets -- some of these countries are now outright mocking U.S. officials.

On Saturday, when State Department spokeswoman Morgan Ortagus tweeted out criticism of China’s heavy-handed efforts to end a pro-democracy movement in Hong Kong, Hua Chunying, a spokesperson for China’s Foreign Ministry, shot back with three words: “I can’t breathe.” That was the phrase Floyd said as a Minneapolis police officer held him down by pressing on his neck.


This week is the 31st anniversary of the Chinese communist government’s massacre of pro-democracy protesters in Tiananmen Square. State Department human rights officials have urged senior diplomats to post videos of themselves holding candles in honor of the dead, whose memory Chinese leaders have tried to wipe away from their official history. State Department officials, according to an email obtained by POLITICO, are asking fellow diplomats, NGO activists and others to share the videos on social media with the hashtag #TiananmenVigil.

READ:  Another Oath Keeper with links to Roger Stone charged in Capitol riot

But already, U.S. comments on Tiananmen, such as a tweet from Secretary of State Mike Pompeo, are being met with ridicule. Respondents, some of them Americans, are posting video clips of, among other things, peaceful protesters outside the White House being violently dispersed Monday so that Trump could get his picture taken at a church. The announcement that Pompeo was due to meet with Tiananmen Square survivors on Tuesday also was met with eyerolls.

Asked for comment, a spokesperson for the State Department said there was “just no comparison between the challenges we are facing here at home and those placed on the people of China and Hong Kong by the Hong Kong and People’s Republic of China authorities.

“U.S. diplomats around the world are working hard to represent the United States during this time by communicating our values in ways that are culturally appropriate wherever they are,” the spokesperson added. “We are proud of the work they are doing and we are here to support them in their efforts.”

But some current and former U.S. diplomats, several of whom spoke on condition of anonymity, said that from the beginning of Trump’s presidency, they’ve had to work harder to justify American policies.

Trump has articulated an “America First” approach to the world that has meant, in essence, emphasizing America’s economic interests, browbeating allies as well as adversaries on issues including security pacts, and expressing a strong disdain for multilateral institutions.

The Trump team also is more likely than past administrations, critics point out, to use the issue of human rights in a selective manner. U.S. presidents have often played up human rights issues when dealing with adversaries, while raising them quietly, if at all, with allies. But under the Trump administration, that longstanding discrepancy has become a yawning gap: It blasts Iran for jailing women’s rights activists, for instance, but says nearly nothing when Saudi Arabia does the same thing.

The perception of hypocrisy has undercut even those limited efforts, and the dystopic American scenes beamed into foreign TV sets and smartphone screens are only deepening the problem, U.S. diplomats say. “I fear the next time we try to argue to a foreign government for fair treatment of protesters,” one of them said.

Daniel Russel, a former senior Obama administration official who dealt with Asia, said that American diplomats traditionally have been able to acknowledge U.S. struggles when dealing with foreign audiences. That dash of humility, however, was coupled with a sense of U.S. credibility – that America could be relied upon to help the oppressed in other countries as they fought for democracy, human rights and other ideals.

Under Trump, a president who has repeatedly praised authoritarian leaders around the world, that credibility has been damaged, many current and former U.S. diplomats argue. Trump has urged officials to shoot looters and “dominate” unruly protesters, while threatening to send in the U.S. military if he feels they’re not doing enough to quell unrest sparked by Floyd’s death. In another country, unleashing the military on domestic protesters is considered a tripwire that would have U.S. diplomats scrambling to game out whether civil unrest could lead to civil war or a mass atrocity.

“The willingness of people in other countries to stand with you rests in large part on whether they believe that you stand for something,” Russel said. “And if America’s moral standing is degraded, then its influence in countries like China will be degraded.”

Some of the blowback amounts to online trolling from governments with next to zero credibility on human rights. Iranian Foreign Minister Javad Zarif, whose Islamist government rigs elections, bans Twitter and violently suppresses popular protests, recently tweeted out a U.S. press statement on Iran marked up in red to instead condemn America for racism. “Some don’t think #BlackLivesMatter,” the Iranian diplomat wrote pointedly. Pompeo snapped back at him, “You hang homosexuals, stone women and exterminate Jews.”

But even relatively friendly countries or government bodies have opined on the American protests and the underlying cause: police brutality toward people of color. Big and small demonstrations in honor of Floyd have been held in countries from the United Kingdom to New Zealand.

African Union officials were among those who have demanded justice. “This is one too many. We may be black, but we are people too,” AU official Kwesi Quartey said. “Africa demands a full investigation into this killing.”

After a lengthy and awkward pause in response to a journalist’s question, Canada’s Prime Minister Justin Trudeau said his country is watching events in the U.S. in “horror and consternation” while also noting that racism is an endemic problem in Canadian society.

Even United Nations Secretary General Antonio Guterres has weighed in, warning, via a spokesman, against excessive use of force by American police. “Grievances must be heard, but they must be expressed in peaceful ways and authorities must show restraint in responding to demonstrators,” the spokesman said.

Amid all this posturing, some U.S. envoys overseas have taken the unusual step of commenting on American domestic affairs.

The U.S. ambassador to Zimbabwe, Brian Nichols, carefully laid out his anger over Floyd’s death while linking it to lingering fury in his host country over Zimbabwean abductions and related abuse of labor leaders, opposition activists and others.

“As an African American, for as long as I can remember I have known that my rights and my body were not fully my own,” Nichols wrote. “I have also always known that America, conceived in liberty, has always aspired to be better – a shining city on a hill – and that is why I have dedicated my life to her service.”

Nichols’ statement was spurred in part by Zimbabwe’s anger over puzzling comments by White House national security adviser Robert O’Brien. O’Brien had declared, without evidence, that Zimbabwe was among U.S. adversaries that sought to capitalize on the U.S. protests to damage American democracy.

When the Australian government complained that U.S. police officers had assaulted Australian journalists outside the White House, the U.S. ambassador in Canberra, Arthur B. Culvahouse Jr., issued a statement that, in the eyes of some critics, didn’t really say much.

“We take mistreatment of journalists seriously, as do all who take democracy seriously,” Culvahouse said. “We remain steadfast in our commitment to protecting journalists and guaranteeing equal justice under law for all.” 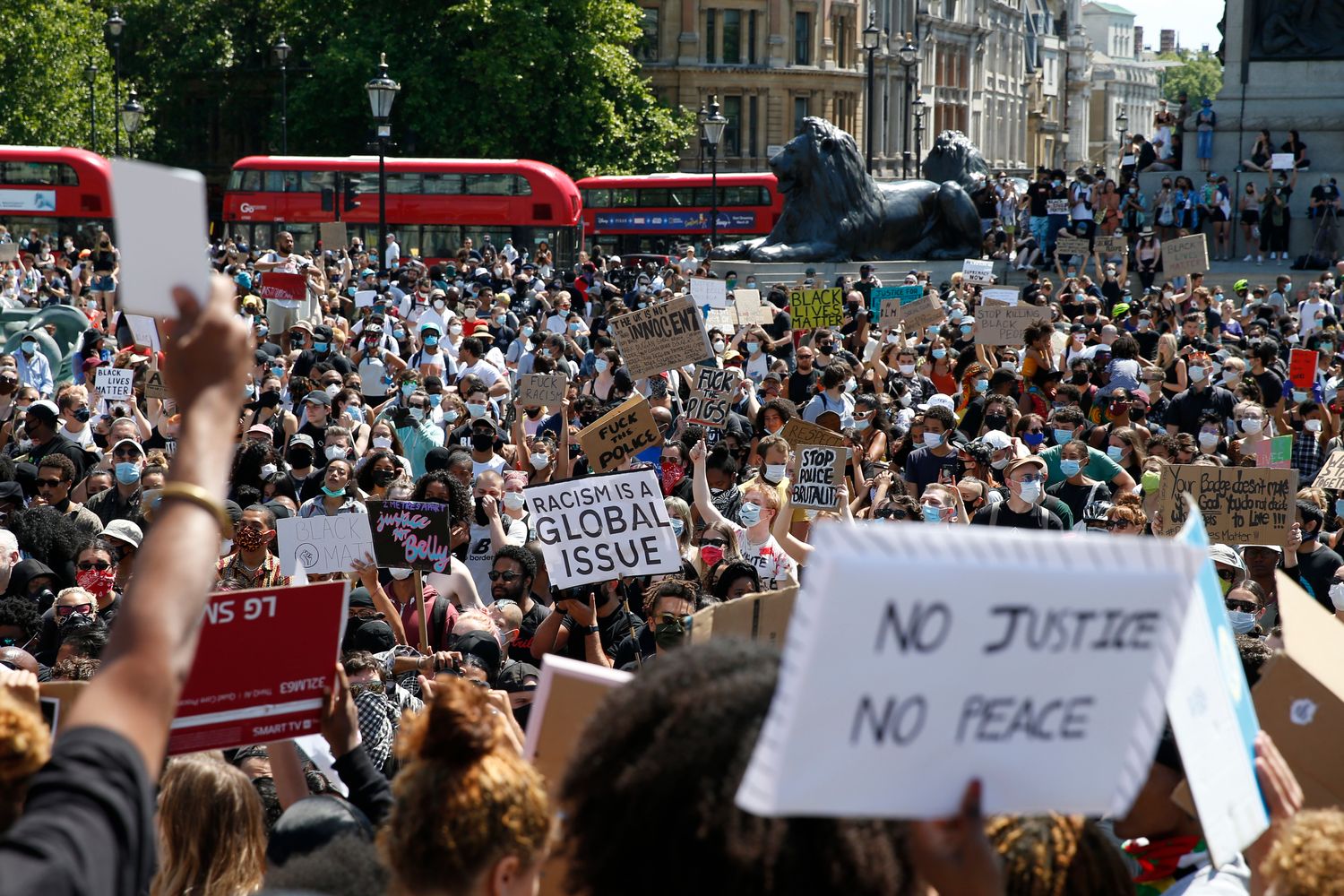 To many, the comments rang particularly hollow given that dozens of journalists have been attacked by police across the U.S. in recent days and Trump himself has long decried reporters as the “enemy of the people.”

Foreign diplomats based in the United States say they remain confident, for now at least, that American institutions are strong enough to withstand the pressures. “I don’t think the Republic is going to collapse,” an Asian ambassador told POLITICO, speaking on condition of anonymity because of diplomatic sensitivities.

Many foreign officials have served in countries far less stable and the U.S. remains a bulwark, with multiple layers of elected government and a robust legal system. But looking long-term, the foreign diplomats said they worry that deepening political polarization in the United States will mire it in domestic crises and distract it from international engagement.

Many foreign diplomats are focused intently on November’s presidential election. Some said they could not be certain that Trump will be willing to leave the White House if he loses; the president already is raising questions about the validity of voting by mail options that many states are sure to use due to the coronavirus pandemic.

“When I was in school – elementary, middle, high – we learned about the democracy in the United States,” one foreign diplomat told POLITICO. “This country is very big and powerful, and it won’t be demolished. But the social divisions – it’s just deeper than the previous times.”