Exxon Mobil is being challenged on climate by an upstart investment group. 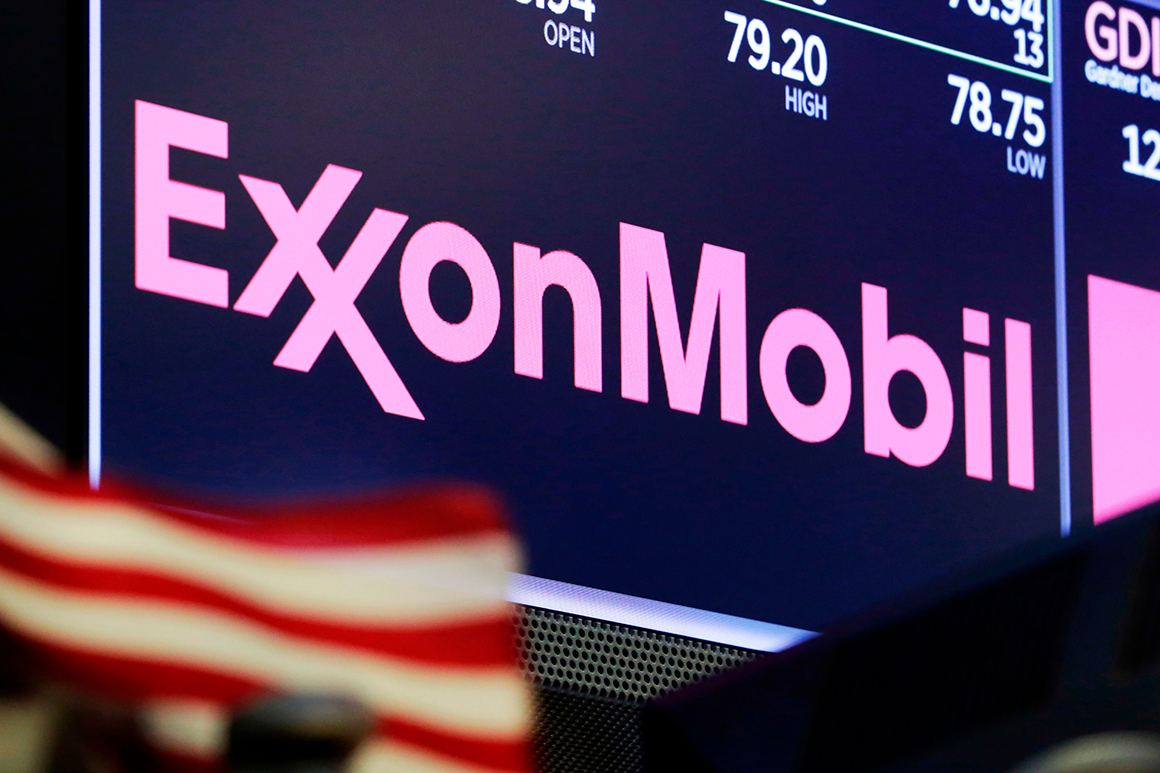 Exxon Mobil Corp., once a global superpower that could bend governments to its will, is locked in a battle against an upstart investor that wants to shake up the oil giant’s management.

The investor, Engine No. 1, has a stake valued at about $50 million, making it a niche player at the $253 billion company. But it has rallied a critical mass of institutional support to do what decades of environmental and shareholder activism never could: put Exxon Mobil on defense.

“There’s never been a campaign like the one at Exxon,” said Andrew Logan, senior director of oil and gas at the sustainable finance group Ceres. “You don’t get endless shots at reforming the Exxon board.”

Exxon Mobil shareholders on Wednesday will vote on whether to install Engine No. 1’s four dissident candidates on the 12-member company board.

The vote, regardless of outcome, could be a defining moment in stakeholder capitalism. Nearly three dozen climate- and sustainability-related shareholder initiatives are on the table at companies this year, with Exxon Mobil taking center stage.

Engine No. 1, which calls itself purpose-built to create long-term value, was announced Dec. 1 and launched its first campaign — against Exxon Mobil — days later. The fight with Exxon, the investor group says, isn’t about climate change — it’s about risks to the oil giant's business.

For decades, investor activism on climate was heavily ideological. Do-good shareholders and activists could bring science and data to the table, but as long as sales were up and profits strong year over year, it was difficult to make a case that oil and gas companies were bad business.

Those debates have now become economic as climate change roils balance sheets and consumers start voting with their pocketbooks. While the debate among policymakers in Washington remains mired in old-school ideologies, modern stakeholder capitalism comes armed with questions about financial results and returns on investment, especially as governments work to eliminate the use of fossil fuels.

READ:  McCarthy locking up support despite fears of GOP losses

“This debate should not be ideological,” Engine No. 1 founder Chris James said in an interview. “When companies think about their impacts, whether they are on communities or the environment, it brings a lot of common sense back to capitalism.”

In the U.S., President Joe Biden is pushing changes intended to drive capital to clean industries, and the Securities and Exchange Commission and other regulators are weighing rules that could prompt companies to abandon investments that contribute to climate change, proposals that have encountered opposition from Republicans.

Engine No. 1 has drawn support from big shareholders, including California and New York state, the Church of England, Legal & General Investment Management, and Federated Hermes, which have said they’ll back the dissident nominees.

And Institutional Shareholder Services and Glass Lewis & Co. this month both made recommendations heavily in Engine No. 1’s favor. The proxy advisory firms carry weight with large institutional shareholders — including mutual funds and exchange-traded funds — that invest in a broad cross-section of the stock market, typically on behalf of retirement savers.

The vote will also be watched for how certain shareholders cast their ballots. Vanguard, BlackRock and State Street, three of the world’s largest asset managers, are Exxon Mobil’s biggest shareholders. Those companies haven’t indicated how they’ll vote, but all have drawn complaints from other investors and environmentalists such as the Sierra Club, who say they have failed to deliver on their own pledges to put a premium on environmental, social and governance, or ESG, metrics.

“I am tracking the voting records of BlackRock and Vanguard, and expect full transparency and sufficient explanations regarding the reasoning and justification for the votes BlackRock and Vanguard cast,” Wisconsin State Treasurer Sarah Godlewski said in a written statement. “It is critical for the financial resiliency of our funds that asset managers hold corporate boards accountable and stop at nothing less than a guaranteed commitment to address systemic climate risk.”

Engine No. 1 has momentum, but it still faces an uphill fight. Nearly half of Exxon Mobil’s shares are held by mom-and-pop investors, a group that tends to vote with management if they vote at all. By comparison, the 20 biggest shareholders combined, including the state of California and Legal & General, hold only 35 percent of the vote.

Exxon Mobil has said it will spend $35 million to counter Engine No. 1’s campaign, which the investor group said cost it nearly $30 million to mount.

Unlike prior attempts to take on Exxon Mobil and other big oil companies, Engine No. 1 didn’t engage on the social merits of oil or drilling. It went to the energy giant with a stack of data about the company’s financial performance and decision making.

Exxon Mobil’s focus on oil production has led to “undisciplined” spending and the company’s “refusal to accept that fossil fuel demand may decline in decades to come has led to a failure to take even initial steps towards evolution and to obfuscating rather than addressing long-term business risk,” Engine No. 1 said in a presentation to investors this month. The company’s debt is at its highest level in history.

“For Exxon Mobil to avoid the fate of other once-iconic American companies, it must better position itself for long-term, sustainable value creation,” Engine No. 1 wrote.

Exxon Mobil’s plan for carbon capture, a nascent technology for taking carbon from the air and storing it underground, is an example of Engine No. 1’s complaints. The energy company has committed to spend $3 billion on low-carbon efforts, including carbon capture, through 2025, but that’s only a fraction of its $16 billion budget for capital expenditures. Exxon’s “unproductive” capital expenditures have destroyed some $175 billion in corporate value, the investor group said.

Exxon says it will increase investment in carbon capture and other low-carbon ventures when projects are ready to be commercially deployed. Such projects are still in the early phases of development and not commercially viable without tax breaks and regulatory changes in the U.S. and elsewhere.

The company has set goals to reduce greenhouse gas emissions in line with the Paris Climate Agreement to hold global warming to 1.5 degrees Celsius.

“Success in developing these technologies will be critical to both advancing society’s ambitions for a lower-carbon future and in delivering long-term shareholder value,” the company wrote.

The board has named six new directors since longtime CEO Rex Tillerson left the company in 2017 to join the Trump administration, and it plans to add two more within the year.

“The dissident nominees lack experience, expertise and knowledge required to lead a company of Exxon Mobil’s size and importance through the opportunities and challenges of the energy transition,” Exxon Mobil spokesperson Casey Norton said. “Our board has played an important role in overseeing our strategy. Our board and management listen and respond to shareholder feedback.”