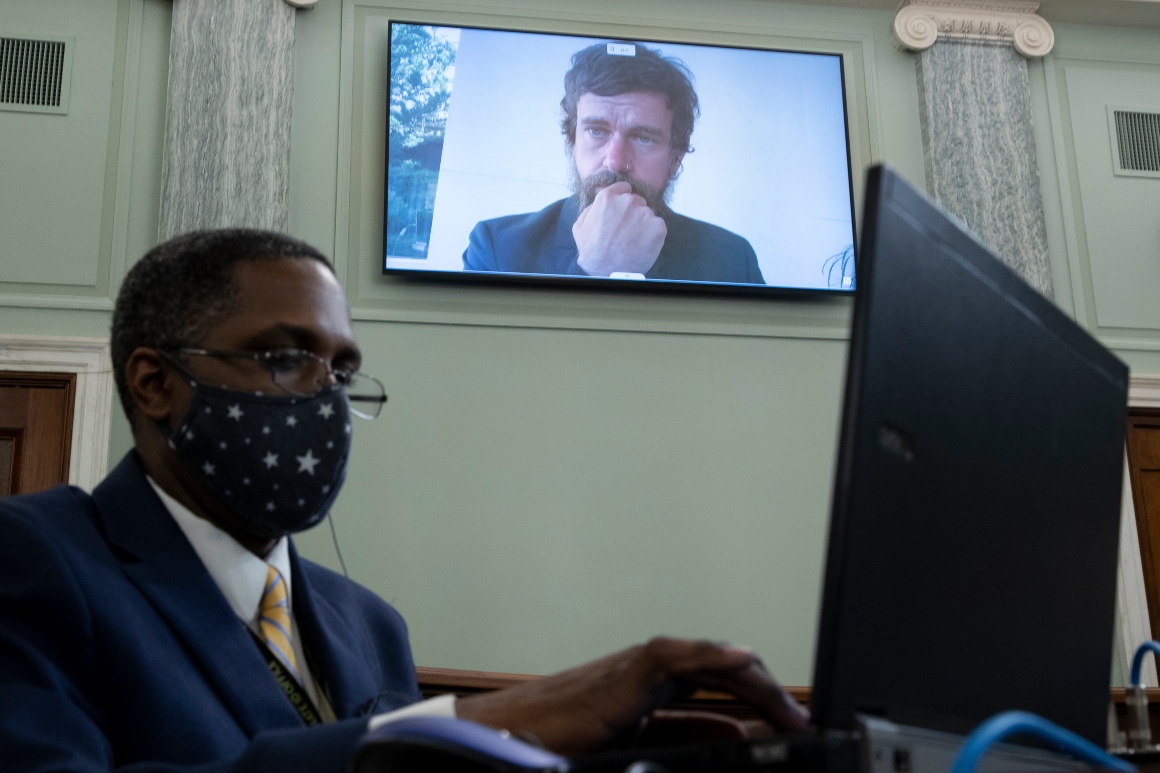 Republican senators hammered the CEOs of Twitter, Facebook and Google over allegations of anti-conservative bias at a Wednesday hearing while Democrats demanded the companies to do more to police content and accused GOP leaders of hauling in the tech CEOs in a bid to influence the election.

The session showed the depth of both parties' frustrations with Silicon Valley, but also how hard it may be for Congress to come together in rewriting the laws that give the internet companies such power to moderate user posts as they see fit.

Partisan sparring extended even into debates about whether Senate Commerce Committee should have held a hearing at all just six days out from Election Day. Democrats rebuked what they called a thinly-veiled attempt to intimidate the tech moguls into giving Republicans preferential treatment on social media platforms so essential to messaging around the November election.

The session comes as lawmakers across the political spectrum, including Trump and Democratic presidential nominee Joe Biden, ratchet up calls to revamp or revoke entirely a fiercely guarded 1996 law known as Section 230, which immunizes online companies from an array of lawsuits over what user posts they allow, take down or otherwise act on. Few lawmakers, however, dug into the details of legislation, instead focusing on their full range of critiques against the companies.

Here are our top takeaways from the hearing:

Republican lawmakers appeared to relish the opportunity to publicly hammer the CEOs on their policies, which have faced mounting criticism from Trump and his GOP allies as the November elections near. And they seized on Twitter and Facebook's recent decision to limit the circulation of disputed New York Post articles alleging direct ties between Biden and his son's business interest to accuse the companies of partisanship.

Sen. Ted Cruz (R-Texas), an outspoken tech critic who in recent days has launched a media blitz criticizing tech companies, railed against Dorsey over Twitter's decision to initially block users from linking out to the Post's reporting.

"Who the hell elected you and put you in charge of what the media are allowed to report and what the American people are allowed to hear?" Cruz said during one of the hearing's most pointed exchanges.

Sen. Mike Lee (R-Utah) suggested tech companies are engaging in deceptive and unfair business practices by purportedly handling right-leaning content differently — a sign that Republicans are prepared to pull from a wide array of legal tactics to challenge the companies.

READ:  Rep. McCaul: Biden is 'going to own' Afghanistan fallout

Another prominent GOP tech critic, Sen. Marsha Blackburn of Tennessee, appeared to seize on the hearing to promote her new book by placing it in view of the camera as she pressed the tech moguls on allegations of bias. Blackburn, a Trump ally on tech policy, grilled the Google's CEO on whether the company still employed a staffer who "had very unkind things to say about me."

The theatrics started long before the session itself. In a rare move, the Senate Commerce Committee issued a video previewing the hearing, featuring instances where Republicans had allegedly been "CENSORED" by the three companies and promising to "hold big tech accountable."

Cruz also telegraphed his plans to lay into the tech chiefs ahead of the hearing, releasing a movie trailer-like video vowing to "get answers" from the "oligarchs" in Silicon Valley who he accused of being "drunk with power." A separate promo released by Cruz's office billed the session as a showdown between Cruz, a "FREE SPEECH CHAMPION," and Dorsey, a "CENSORSHIP CZAR."

Soon after the hearing, Trump's campaign accounts on Twitter began reposting clips of GOP lawmakers grilling the CEOs in a sign of synergy between his election team and his Republican allies on Capitol Hill.

Democratic lawmakers walloped Republican leaders for holding the hearing days out from the election, accusing them of trying to get the companies to back off from enforcing their rules on posts by Trump and his allies during a critical period.

It marked a distinctly contentious hearing for the Senate Commerce Committee, which this Congress has otherwise engaged in bipartisan negotiations on an array of tech policy issues, including on data privacy. But that spirit of collaboration was nowhere to be found on Wednesday.

"This is baloney, folks," said Sen. Jon Tester of Montana as the hearing neared its finish. "Get off the political garbage and let's have the Commerce [Committee] do its job."

Sen. Amy Klobuchar of Minnesota, meanwhile, tore into Republicans for politicizing concerns about election security instead of taking up legislation on the issue.

“I want to note first that this hearing comes six days before Election Day and, I believe, we're politicizing and the Republican majority is politicizing what should actually not be a partisan topic,” she said.

Other Democrats opted instead to redirect their questioning toward other issues, such as how Silicon Valley is affecting local news and how the CEOs plan to combat extremist content, offering glimpses of what priorities Democrats might take up on tech if they retake the Senate.

There's widespread agreement in Washington that the tech industry's legal protections need to be revisited or pared back — but you might not have been able to tell from Wednesday's hearing.

Lawmakers on Capitol Hill have introduced and even advanced bipartisan proposals to revamp Section 230 in recent months, but those bills got little-to-no attention at the session Wednesday, which was instead dominated by committee infighting.

And even Democratic proponents of Section 230 reform balked at the Republicans' focus for the hearing.

"I have been an advocate of reform of Section 230 for literally 15 years ... so I really welcome the bipartisan consensus that we're seeing now that there needs to be constructive review," said Sen. Richard Blumenthal (D-Conn.), co-sponsor of a bipartisan Section 230 aimed at curtailing child abuse online.

"But frankly I am appalled that my Republican colleagues are holding this hearing literally days before an election," Blumenthal said, accusing GOP lawmakers of seeking to "browbeat" the platforms and bend their policies to their liking.

Sen. Brian Schatz (D-Hawaii), co-sponsor of a separate bipartisan bill to revamp Section 230, declined to ask the witnesses any questions in protest.

"I have plenty of questions for the witnesses, on Section 230, on antitrust, on privacy, on antisemitism, on their relationship to journalism," he said. "But we have to call this hearing what it is. It’s a sham."

The tech industry has long resisted changes to Section 230, widely credited with helping to create the modern internet. But while all three of the CEOs testifying Wednesday rejected calls to scrap the legal shield altogether and defended its importance, both Zuckerberg and Dorsey voiced openness to tweaking it.

In a pair of notable endorsements, Zuckerberg urged Congress to "update the law to make sure it’s working as intended." And Dorsey proposed “three solutions” to address concerns raised by lawmakers about how tech companies moderate user content, including possible “expansions to Section 230."


His proposed frameworks included requiring companies to disclose more information about how they make decisions on content, allow users to appeal those rulings and let them select which algorithms dictate what content users view on online platforms.

But neither Dorsey nor Zuckerberg spelled out whether they would support making the protections afforded under Section 230 contingent on those requirements. And they hedged their calls for legislation by warning that any changes to the law could have vast consequences for smaller firms that may not have sufficient resources to comply with new regulations.

Their endorsements are likely to be tested as lawmakers continue to press for more sweeping changes than industry leaders have been willing to embrace to date.

Twitter's CEO was in the hot seat most of all, for once

Zuckerberg has testified on Capitol Hill more than any other prominent Silicon Valley CEO in recent years, and his company has arguably faced the brunt of Washington’s backlash against the tech industry amid scrutiny of its privacy practices, content policies and competitive dominance.

But on Wednesday it was Twitter's Dorsey who appeared to take the most heat, due in large part to the more forceful actions the company took to limit the distribution of the disputed New York Post articles on Joe and Hunter Biden.

Dorsey faced a slew of pointed questions from panel Republicans. Chair Roger Wicker (R-Miss.) pressed the tech mogul on whether the platform holds Trump to a higher standard than other global leaders, such as Iranian Ayatollah Ali Khamenei. Sen. Cory Gardner (R-Colo.) grilled the CEO on the company’s policies against Holocaust denial material. Sen. Ron Johnson (R-Wisc.) pushed the tech mogul to say whether he had knowledge of whether Russia is behind the materials provided to the New York Post. (No, he does not, said Dorsey.)

But it was Dorsey and Cruz’s back and forth on why the publication continues to be locked out on Twitter that encapsulated how Republicans approached the company at the session. Dorsey said the Post could regain access to its account by deleting its original tweets with links to the report, and that it’d be able to repost them now under a revised policy.

Cruz wasn’t satisfied by response and accused Dorsey of trying to "tell the American people what reporting they can hear.”

Dorsey is poised to face similar heat just weeks from now at a separate Senate Judiciary hearing slated for after the election that is more explicitly focused on allegations of anti-conservative bias.