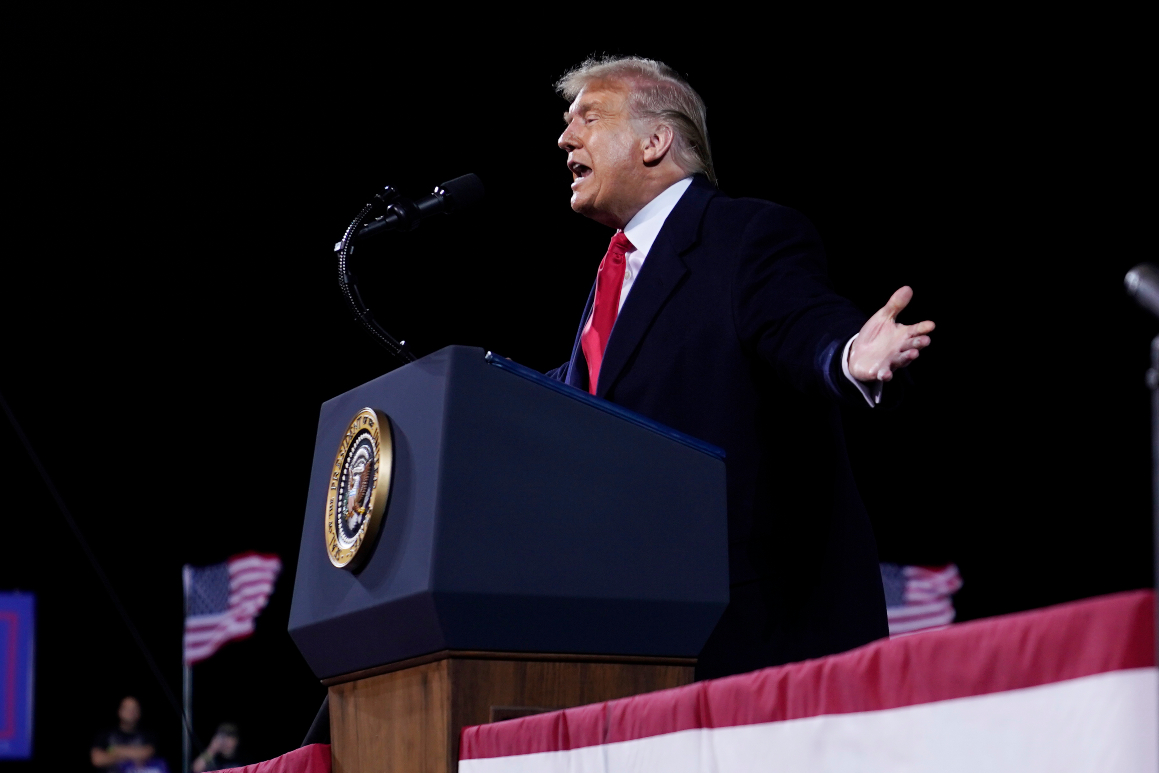 President Donald Trump on Monday cast doubt on the late Supreme Court Justice Ruth Bader Ginsburg’s dying wish that her vacancy on the court be filled by the winner of November's presidential election, accusing Democratic leaders without evidence of fabricating the statement Ginsburg’s granddaughter provided to POLITICO.

Clara Spera, Ginsburg's granddaughter and a fellow at the American Civil Liberties Union, told POLITICO that shortly before her death Friday evening, the justice declared that “my most fervent wish is that I will not be replaced until a new president is installed.” But Trump suggested on Monday that the former associate justice's wish may have been the creation of Congressional Democrats, an allegation for which he offered no justification or proof.

“I don't know that she said that, or was that written out by Adam Schiff, and Schumer and Pelosi,” Trump said in an interview on “Fox & Friends,” referring to the chair of the House Intelligence Committee, the Senate minority leader and the House speaker.

“I would be more inclined to the second, ok you know that came out of the wind, it sounds so beautiful. But that sounds like a Schumer deal or maybe a Pelosi or shifty Schiff,” he said, adding later: “I mean, maybe she did and maybe she didn't.”

Spokespeople for Pelosi and Schumer did not immediately return emails seeking comment on the president's accusation.

Ginsburg’s dying wish has become a rallying cry for liberals, who have pledged to block Trump’s nominee. Democrats, though, are in the minority in the Senate and have very little in terms of options available to them that could unilaterally block Trump's nominee from being confirmed.

The 87-year-old’s death, stemming from complications with pancreatic cancer, has upended this fall’s election, with Trump and Senate Republicans vowing to fill Ginsburg’s vacancy on the court in the month and a half before voters head to the polls to either give Trump a second term in office or unseat him, and to maintain Republican control of the Senate or hand it to Democrats.

The president said Monday he plans to name his pick for the open seat on Friday or Saturday, and that he would like his nominee to receive a vote on the Senate floor by Election Day.

Former Vice President Joe Biden, Trump’s Democratic rival, has said that the next justice should be chosen by the winner of November’s election, citing Republicans’ refusal to hold confirmation hearings in 2016 when former President Barack Obama nominated Merrick Garland to fill the seat vacated by the late Justice Antonin Scalia.

Schiff called the president’s accusation “low,” “even for you.”

“No, I didn’t write Ruth Bader Ginsburg’s dying wish to a nation she served so well, and spent her whole life making a more perfect union,” the California Demorat wrote in a tweet. “But I am going to fight like hell to make it come true. No confirmation before inauguration.”