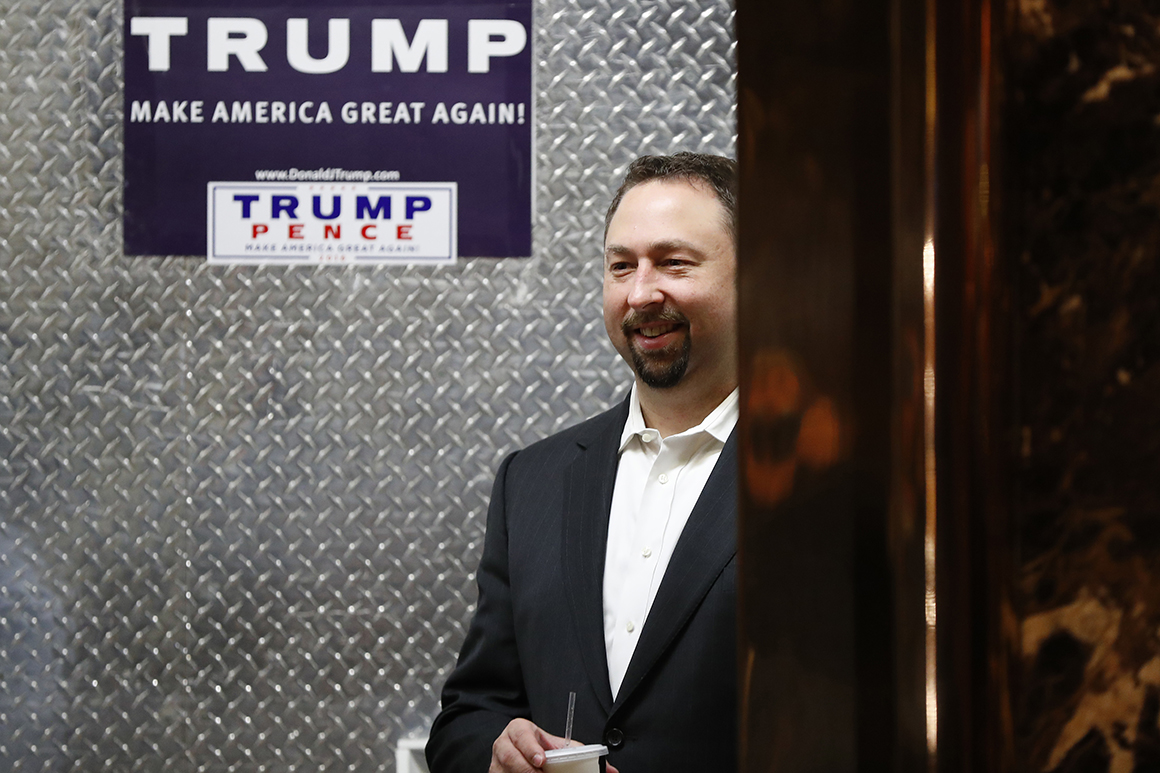 President Donald Trump’s reelection team is tapping Jason Miller to serve as a senior adviser, bringing a controversial figure back into the fold as the campaign barrels towards a treacherous final stretch.

Miller, who served as a top adviser on Trump’s 2016 bid, will focus on overall strategy and help to coordinate between the campaign and White House. Two people familiar with the hire said Miller would provide additional support to campaign manager Brad Parscale. While Miller served as chief spokesman four years ago, he will not be running communications, a role filled by Tim Murtaugh.

After the 2016 election, Miller was named White House communications director. But weeks before Trump’s inauguration he backed out after reports emerged that he had an extramarital affair and impregnated another campaign official, A.J. Delgado. In the ensuing months, Miller was engaged in a protracted custody battle with her. He later stepped down from his position as a commentator on CNN and has an ongoing lawsuit against an online media outlet over what he has called a defamatory report about his personal life.

Yet Miller has remained close with Trump, who has kept up with loyalists he credits with helping to guide his 2016 campaign. Bill Stepien, a top adviser on Trump’s first presidential bid, was recently elevated to deputy campaign manager. Kellyanne Conway, who was Trump’s campaign manager, has been White House counselor his entire first term. Corey Lewandowski and David Bossie, two other top officials, recently met with Trump to express concern about his reelection prospects. Justin Clark, another longtime adviser, is helping to spearhead the GOP legal fight over voting rules.

For all his personal problems, Miller is well regarded as a political operative. His decision to forego the White House job was regarded as a serious blow within the administration. The White House’s press operation was deeply chaotic during its opening days and beset by leaks and departures.

“Every day I strive to become a better husband, a better father and a better person, and I am humbled by the opportunity for a second chance to serve President Trump,” Miller said in a statement.

The hire comes as an array of public polling has shown Trump lagging behind Joe Biden in key battlegrounds. Republicans have also grown concerned about his standing in traditionally red states like Arizona and Georgia. Miller’s entry into the campaign comes weeks after Stepien was named Parscale’s No. 2.

But those familiar with the hire say it was always the plan to expand the upper ranks of the campaign as the election drew closer.

Miller has a long history in conservative politics and has advised many insurgent candidates who took on entrenched incumbents, including former Kentucky Gov. Matt Bevin and former Kansas Senate candidate Milton Wolf. Before joining Trump’s 2016 campaign, he was a top adviser on Texas Sen. Ted Cruz’s primary effort.

Miller was formerly a partner at the prominent Republican consulting firm Jamestown Associates. The firm produced commercials for Trump in 2016 and is also playing a role in his reelection campaign.

His relationship with the president dates back nearly a decade. While Trump was mulling a 2012 bid, he was in discussions with Miller about running his campaign. Miller also worked as a senior staffer on the 2008 presidential campaign of Trump personal attorney and former New York City Mayor Rudy Giuliani.

He has remained an outspoken Trump loyalist and been a co-host on a podcast with former White House chief strategist Steve Bannon. In June 2019, Miller left his job at a corporate advisory firm after he called New York Rep. Jerrold Nadler “fat and nasty” on Twitter. Miller was criticizing Nadler for his treatment of Trump adviser Hope Hicks during her appearance before the House Judiciary Committee.