The Invisible Man isn't the only expert in making himself imperceptible with optics science. Species of ultra-black fish also have that tactic down pat, according to a study published Thursday in the journal Current Biology.

To fend off predators, fish wield common camouflage strategies such as transparency and mirrored surfaces. These methods are successful in shallower waters, through which sunlight easily penetrates.

However, at more than 200 metres deep into the ocean – in the lower mesopelagic and bathypelagic zones – there is little sunlight. So in these areas, evolutionary adaptations such as transparency and mirrored surfaces aren't as useful at keeping away assailants looking for dinner. That's because fish that use these defence strategies reflect at least 0.4 per cent of bioluminescence from other deep-sea animals – which describes the production and emission of light by a living organism. 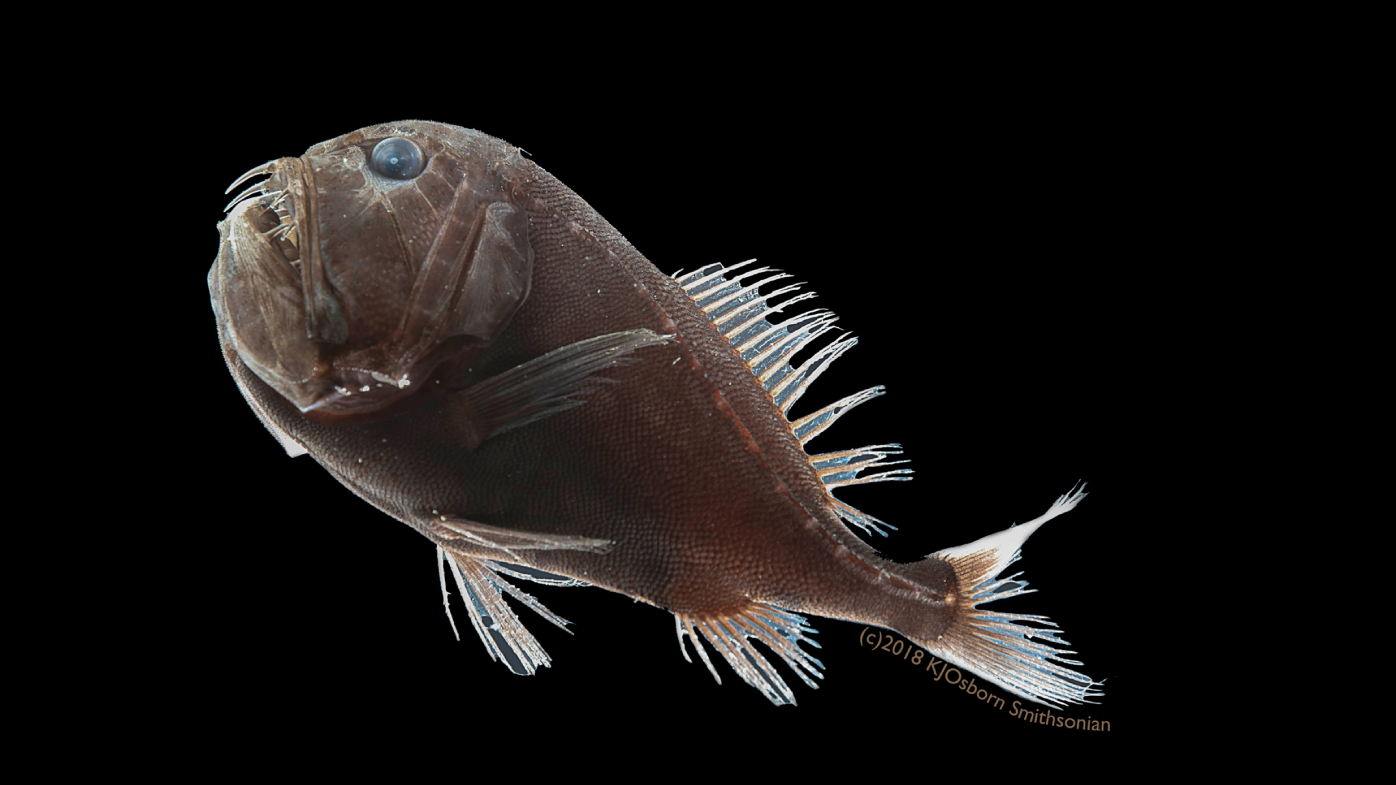 Pigmentation is another method for being incognito in the sea; it allows animals to absorb light from bioluminescent sources and thus become visually undetectable instead of reflecting that light off of themselves.

Karen Osborn, a research zoologist with the Smithsonian's National Museum of Natural History, thought to take a closer look at fish skin when she tried to photograph black fish she and her colleagues caught in Tucker trawl nets in the Gulf of Mexico and in Monterey Bay, California. Tucker trawl nets allow scientists to catch fish from mid-water levels, where ultra-black fish can be found. Regardless of the quality and arrangement of her camera and lighting, Osborn couldn't capture any detail in the shots.

"It didn't matter how you set up the camera or lighting," Osborn said in a press release. "They just sucked up all the light."

Knowing the ineffectiveness of common camouflage tactics, the researchers hypothesised that pressure to limit reflected light might have led to the evolution of pigmented body surfaces with near-zero reflectance in ultra-black fish. Reflectance is the measure of the proportion of light striking a surface and reflecting off of that surface.

Using different tests, modelling and comparisons to other cold-blooded animals, the scientists found that black fish absorbed more than 99.5 per cent of the light that hit their skin – in other words, they had a reflectance of less than 0.5 per cent.

To test the ultra-black coloration of the fishes, researchers collected 18 species from the waters of the Gulf of Mexico and Monterey Bay, California, during two research cruises.

They measured the fishes' reflectance using a back-reflectance probe, which is composed of three parts, said Alexander Davis, a coauthor of the study and doctoral student in biology at Duke University in North Carolina: a light source, a detector that counts the number of photons (light particles) coming back and a fibre optics cable. The fibre optics cable collects the light shone on the subjects and sends it back to the detector, which lets the scientist know how much light is being reflected.

At a wavelength approximate to that of both sunlight and bioluminescence in the deep sea, 16 of the 18 collected species exhibited reflectances less than 0.5 per cent.

Oneirodes, a genus of fish known as anglerfish, had the lowest reflectance measured.

Ultra-black fishes' coloration is even darker than some man-made materials, such as black paper and freshly paved asphalt, Davis said – which reflect around 0.04 per cent to 10 per cent or more of light.

The underlying structure that made ultra-black colouration possible was tightly packed melanosomes right under the fishes' skin. Melanosomes are pigment particles that provide animal tissues with colour and help their skin to absorb light instead of reflecting it.

This process parallels what we know about how melanin works in human skin, in that "melanin in human skin absorbs light, mostly to protect cells from UV damage among other things," Davis said.

Ultra-black fish can be both predators and prey, so the researchers thought the fish might have faced pressure to evolve dark coloration to avoid other predators.

READ MORE: Giant ancient dolphin was the apex predator of the sea, feasted on killer whales

"When things are so dark like they are in the deep sea, if you reflect even a handful of photons, something can detect you," Davis said. "And here, these animals are covering their whole [bodies] in this ultra-black skin to basically suck up all the light and match the pitch blackness of the deep sea."

The researchers also found that by reducing their reflectance, ultra-black fish can reduce their chances of being seen by predators six times more than fish with 2 per cent reflectance.

The researchers suggested that ultra-black fish biology could advance the development of less expensive, flexible and more durable ultra-black materials for optical technology including cameras and telescopes, and for camouflage.

"One of the main uses of ultra-black materials is to coat the inside of optical equipment to prevent stray light from bouncing around within it," Davis said. "As long as you can create a random array of these nanoparticles that are highly absorbing and the right size and shape, then you should be able to coat anything with it. So there's no need to create some detailed structure to make it work."