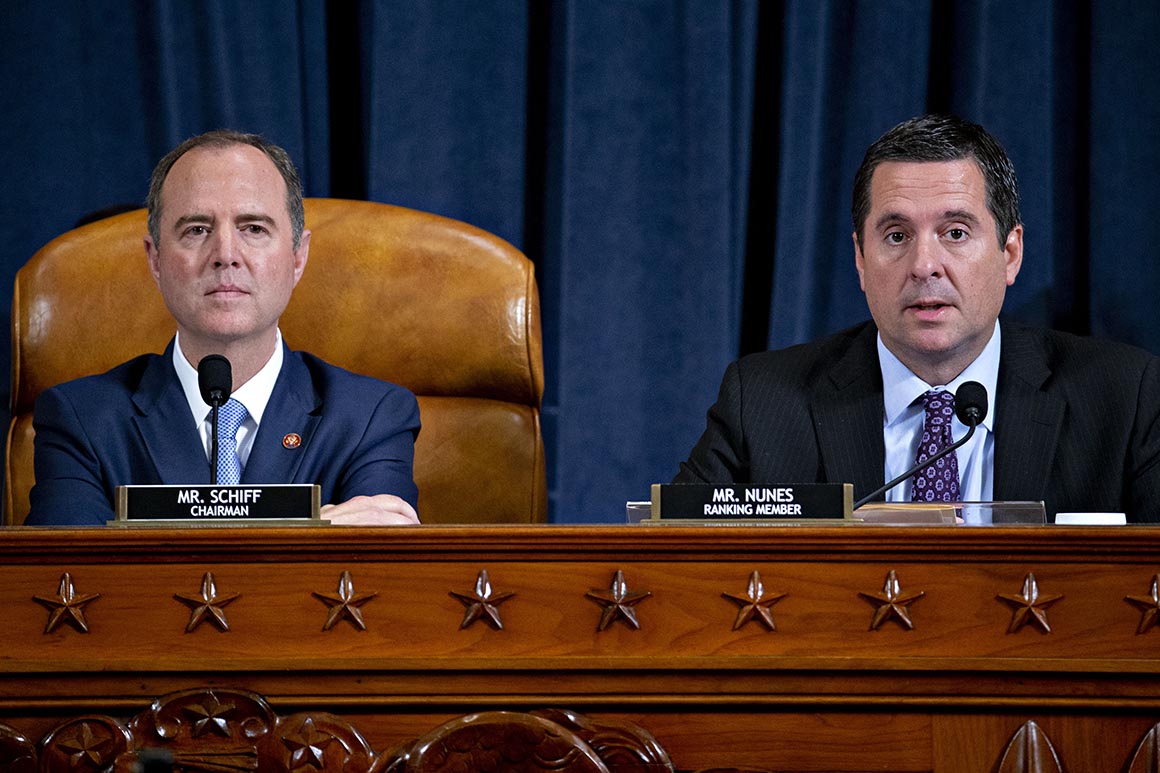 Either way, GOP members of the House Intelligence Committee have skipped all but one of the panel's proceedings, public and private, since before Congress went into its coronavirus-lockdown in early March. And that impasse shows no signs of ending, even as the panel takes up issues like China, Covid-19 and the annual intelligence policy bill.

Democrats see it as yet another manifestation of the toxic partisan split dividing the panel during Donald Trump's presidency, in contrast to the still-bipartisan spirit that prevails on the Senate Intelligence Committee.

“It seems almost counterproductive on their part,” House Intelligence Chair Adam Schiff (D-Calif.) told POLITICO when asked about the Republican no-shows. “It seems rather childish but I hope that they will reconsider.”

The committee, with 13 Democratic and eight Republican members, has held at least seven bipartisan hearings and roundtables, both open- and closed-door, since the pandemic shut down much of Washington in March and April. The sessions, all unclassified, included a virtual hearing in mid-June where representatives of Facebook, Twitter and Google answered questions about foreign efforts to subvert the 2020 presidential election.

The lone session to have a GOP presence was an April 28 roundtable attended by then-Rep. John Ratcliffe of Texas, a week before the Senate hearing on his nomination to be Trump’s director of national intelligence.

Committee member Rep. Eric Swalwell (D-Calif.) noted that Republicans have expressed concerns about alleged political bias by those same big tech platforms. “How do you explain to your constituents that you have representatives from those three companies and you just chose not to show up?” he asked.

Republicans rejected the idea that they’re formally snubbing the committee’s work. The real problem, they say, is that Democrats insist on discussing sensitive information in virtual online sessions instead of meeting in person.

“These things get hacked. Why are we putting ourselves at that risk?” asked Rep. Brad Wenstrup (R-Ohio), a member of the committee. “You border on classified information and maybe sometimes even spill into it. It’s just not the way to conduct business. And there is no reason for it."

"Maybe it’s inconvenient for Adam Schiff to come back here from California," Wenstrup added. "It’s just not appropriate within the intelligence community and it’s not fitting of protocol.”

Rep. Chris Stewart (R-Utah) said: “I really don’t believe it’s a boycott. It’s not an organized effort at all. I would just say that we have concerns about the format.”

“We’re here. Why aren’t we doing it like we used to?” asked Stewart, who also serves on the House Appropriations Committee, which is slated to hold live markups where members can join remotely. “I think we can meet together and do it safely.”

Democrats say the Republicans haven’t provided a good explanation about why they’ve withdrawn or indicated what could get them back to the table. But Rep. Jim Himes (D-Conn.) attributed the Republicans' absences to factors like Schiff’s leading role in the president's impeachment — and, before that, the years of acrimony caused by the panel’s GOP-led Russia investigation.

“They have their grievances, right?” Himes said. “The whole thing is absurd but they haven’t even really negotiated.”

Even before the pandemic shutdowns, Republicans on House Intelligence had boycotted a February hearing in Himes' subcommittee on emerging technology and national security, accusing Democrats of staging "publicity events" rather than looking into issues like alleged FBI abuses in domestic surveillance. That hearing occurred weeks after the end of Trump's impeachment trial.

The intelligence committee normally meets in a secure room in the Capitol — one that a specialized CIA cleaning crew had to scrub in March after Daniel Goldman, the panel's former impeachment counsel, tested positive for the coronavirus.

The panel has also convened a series of closed but unclassified roundtable discussions with past government officials focused on aspects of the coronavirus — such as Chinese disinformation around the pandemic, biothreats and the intelligence community’s handling of Covid-19. Attendees included former Director of National Intelligence John Negroponte, former acting CIA Director Michael Morell and former Secretary of State Madeleine Albright.

The roundtables, including some that have been strictly Democrats-only by design, are conducted via Microsoft Teams, which features end-to-end encryption to prevent eavesdropping.

A senior committee official dismissed Republicans' cybersecurity objections as "non-concerns," saying the committee's staff had "consulted our security and the House security” about the risks of a breach. "There was actually less risk of that happening during a Microsoft Teams or WebEx session than there was logging into your House email or Gmail account from your home computer," the official said.

The impasse threatens to derail a series of products the panel is looking to issue in the coming weeks and months.

The committee plans to meet in person, or at least partially, to mark up its annual intelligence authorization bill by the end of July. But because of pandemic-era social distancing requirements, the panel will perform what’s called a “strawman,” where majority members are located in one secure room, the minority in another, with the budget directors and lawyers in another who then walk members through the entire bill by telephone.

The committee is also finishing up its so-called "deep dive" on China, investigating the various national security threats posed by Beijing's use of technology for surveillance, influence and political control domestically and internationally. The panel has been going back and forth with the intelligence community over the draft of its full report, and going through a classification review of the executive summary, which Schiff will make public when the review is finished, according to the senior committee official.

In addition, the Democrat-controlled panel is reviewing the Covid-19 pandemic and the intelligence community’s role in it. In particular, it's examining how the clandestine apparatus is postured to collect, analyze and disseminate intel on global health issues, including cross-border pandemics and epidemics.

Of the various policy efforts, lawmakers on both sides of the aisle believe that the intelligence bill has the best chance to bridge the latest divide.

“The IAA has historically been bipartisan," Swalwell said. "We have to signal to the Congress that we are aligned, as Republicans and Democrats, and that’s what helps us pass that” by wide, bipartisan majorities."

Wenstrup noted that the bill passed in previous years even during the height of the Russia investigation.

“The committee’s been able to work through things before,” he told POLITICO.

Wenstrup and Stewart insisted that if the panel began to convene in person, the GOP would show up.

“If it was in person I believe we would be there,” Stewart said.