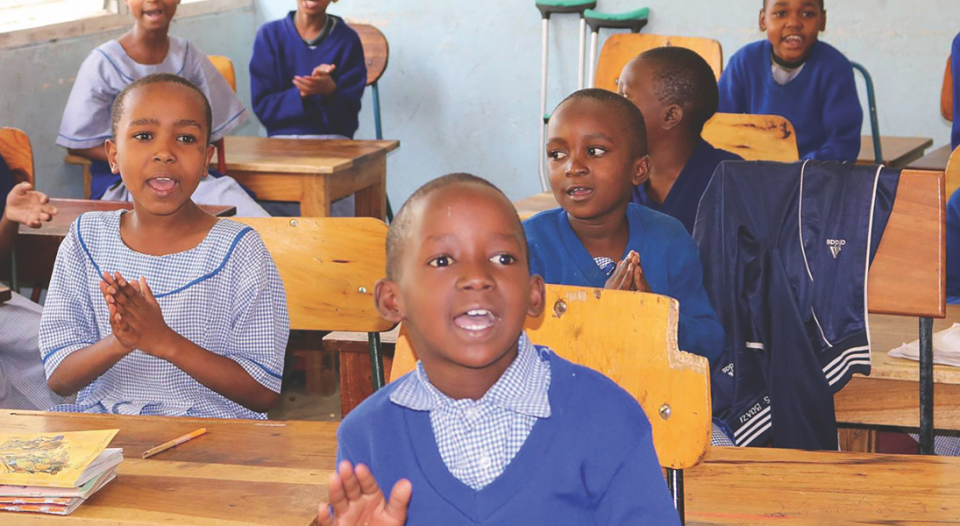 In Matthew 17:20, Jesus says, “Truly I tell you, if you have faith the size of a mustard seed, you will say to this mountain, ‘Move from here to there,’ and it will move; and nothing will be impossible for you.” Don and Joann Tolmie were guided by their faith to make possible the seemingly impossible. In […]

The post “Live beyond yourself” appeared first on Living Lutheran.

In Matthew 17:20, Jesus says, “Truly I tell you, if you have faith the size of a mustard seed, you will say to this mountain, ‘Move from here to there,’ and it will move; and nothing will be impossible for you.”

Don and Joann Tolmie were guided by their faith to make possible the seemingly impossible. In Tanzania, East Africa, in the shadow of Mount Kilimanjaro, the Tolmies helped plant a seed that would become Faraja Primary School, fulfilling a need to serve children with physical disabilities. The story of Faraja and how the Tolmies turned it into a reality is told in a new book, Miracles by the Mountain, by Mike Conklin and Mitch Engel.

Don (who died in 2000) and Joann grew up in Rock Island, Ill., met in high school and together attended Augustana College in Rock Island. Each was raised by parents who modeled generosity and compassion, but as a couple they had no idea that their life journey would lead them to Africa.

In 1999 their pastor, Dwayne Westermann of Christ Lutheran Church in Roanoke, Va., invited Don, then 71, and Joann, then 69, to join him on his third visit to the Northern Diocese of the Evangelical Lutheran Church in Tanzania (ELCT).

At that time, Erasto N. Kweka was bishop of the Northern Diocese. One of the top priorities for his leadership team was to provide education to young people with disabilities in a country where they lack the same academic opportunities as other students. The Tanzanian government guaranteed education to these children, but schools weren’t physically equipped for them.

Kweka had even commissioned blueprints for the school, sure in his faith that it would come to fruition.

When the Tolmies met with Kweka during their first visit to East Africa, they expressed a serious concern for the many children they saw living with physical challenges. Those challenges were especially close to Joann’s heart: “My mother was a teacher for physically disabled children in Illinois, so I knew the difficulties these children face.”

The Tolmies believed that the children deserved an education in a safe environment. “Many physically handicapped children were not receiving any education because there was no residential primary school for them to attend,” Joann said.

Their concern prompted Kweka to share the blueprints with them and ask if they could help start the school. “Don suggested that we build the school in memory of my mother,” Joann recalled, “to honor her work with physically disabled children.”

Because the Tolmies had always tried to instill a spirit of service and generosity in their children and grandchildren, they knew that taking on the school project should be a family decision.

“We committed to our parents many years ago that we would continue the mission of Faraja Primary School,” remembered John Tolmie, the second of the couple’s three sons. “During our family discussions with my parents and our children, our dad would talk with the eight grandchildren that they need to prepare to continue on once Dave, Paul and I are not able to continue an active role with the school.

“My parents had a generational approach to ensuring Faraja Primary School could continue as long as there was a need.”

With that commitment and through the financial support of family and friends, the Tolmies funded the construction and operation of Faraja (which means “comfort” or “consolation” in Swahili). The school officially opened in 2001, near the town of Sanya Juu in northern Tanzania, and was dedicated in honor of Mabel Swanson, Joann’s mother, with her name displayed above the entrance.

At the opening, the 15 students who constituted the first class lined up to greet Don, Joann and John. “They came wearing their uniforms and were rather timid,” Joann recalled. “It melted my heart to see them. Not only did we have a school, but we had students too. We were off and running.”

Over the next 20 years, Don and Joann and other family members made numerous trips to Tanzania, which became a second home to the retired couple.

They saw the school, which many students traveled as long as five hours to attend, become the cornerstone of a developing residential community, providing opportunities for educational, medical and spiritual growth.

Faraja currently enrolls 100 students. Today those students consistently record the highest passing rate for the Tanzania Standard Seven Examination, which assesses their readiness to move on from primary school.

Kristin Westermann, program director for the Faraja Fund Foundation, met the Tolmies when they joined her father’s congregation in the 1990s. She recalled, “When I heard they were going to build a school for physically disabled children in Tanzania, I thought, ‘Of course they are.’ As a small child, I learned a lot of lessons about generosity and service by watching Don and Joann help to resettle refugees in Roanoke, Virginia.

“As an adult, I continued to learn by watching them use their retirement years to help children on the other side of the world.”

For all involved in the school, John said the ministry is a calling and a true partnership with the Northern Diocese. “We have had challenges in the past and would expect them in the future. Our strength comes from the commitment of the board, strategic partners, donors and friends, and a true love and passion for the school. The majority of people who hear about Faraja want to learn more and often become involved by sponsoring a student, supporting medical care, contributing to the operations of the school, and ongoing prayers for the students and staff.

“Life will always throw us challenges, but it’s how you engage with others to solve them that has been the key to success at Faraja Primary School.”

Westermann, a member of Holy Trinity Lutheran Church in Raleigh, N.C., said her involvement with the Faraja Fund Foundation was inspired by her father and the Tolmies. Before his death in 2000, Dwayne Westermann started a scholarship program that evolved into the nonprofit Godparents for Tanzania. He recruited his daughter to help run the initiative, which she’s been directing since 2004.

“Life will always throw us challenges, but it’s how you engage with others to solve them that has been the key to success at Faraja Primary School.”

To date, the organization has provided scholarships for 200 students to attend secondary school, vocational training and college. Westermann said many of the graduates are now doctors, teachers or other leaders in their community.

“The most wonderful lesson I’ve learned from my dad and from Don and Joann is that you should never underestimate the ripple effect,” she said. “Your efforts to help one person or one small group of people may grow and multiply beyond your wildest dreams.”

The ministry of Joann and the legacy of Don and Dwayne—who died only nine days apart—continues in the lives of the students who have moved on to secondary schools, colleges and jobs, overcoming life’s challenges to become self-sustaining. Their successes are truly miracles by the mountain.

“The success of the school is based on the foundation that our parents lived every day,” John said. “One of compassion, love, friendship, loyalty and inherent desire to help others, especially children with disabilities. In addition, they would tell everyone about the story of Faraja with such passion that others would want to travel to visit the school, often traveling with our parents.”

“Every person supports a cause,” Joann said. “It may not be our cause, but that’s OK. See what’s going on in your church and in your community and get involved with something that touches your heart. Think about it, pray about it and then just do it. Live beyond yourself.”

Don and Joann’s legacy of compassion and generosity lives on in their grandchildren. As children, this third generation was encouraged to live beyond themselves and follow their hearts to become involved in projects that help others.

In 2004, then 14-year-old Caroline Tolmie accompanied her father, Paul, on his first visit to Tanzania and Faraja. Inspired and transformed by the experience, she came home to North Carolina looking for a way to tell the story of Faraja and raise funds for the school. She started “Errands for Africa,” earning money by running errands for people during the Christmas holidays. Caroline raised several thousand dollars and used the funds to help create the first computer lab at the school.

The Tolmie grandchildren also formed an initiative called the Faraja Youth Group. Membership has spread to include children from families that have helped support Faraja to other interested young people from across the country who have learned about the school. The group’s initial focus in 2018 was to upgrade the 14-year-old computer lab. A two-year fundraising campaign raised almost $17,000 to purchase much-needed upgrades to equipment, including laptop computers and custom tables and chairs for the special needs students.

The Youth Group also raised money to create a career camp for older Faraja students. The camp prepares students for career options and the educational choices during their final year of school. The Faraja Youth Group’s goals include sending at least one board member to Tanzania and Faraja to witness firsthand the miracles by the mountain.

Don and Joann’s life journey of service has no doubt inspired this next generation to follow their own hearts, to plant seeds that can change lives, and have faith that nothing is impossible.

The post “Live beyond yourself” appeared first on Living Lutheran.