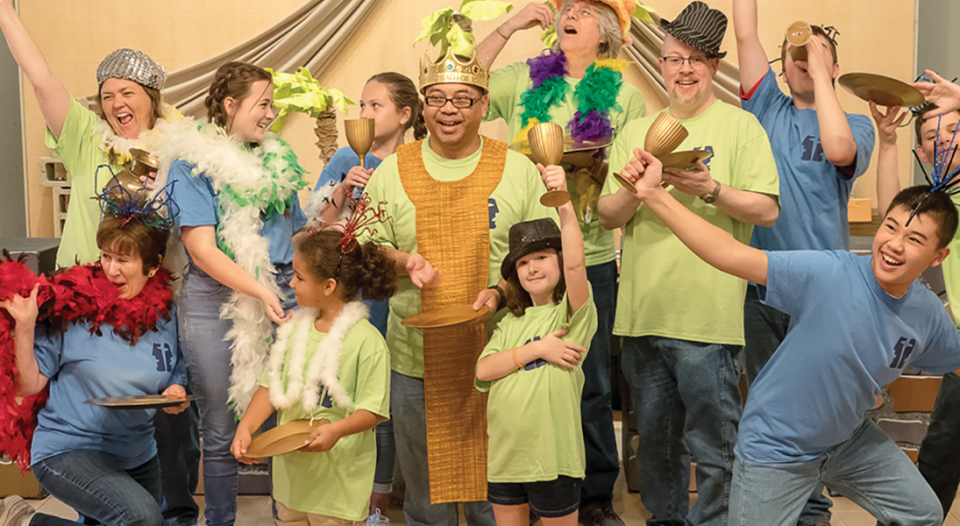 Where are the young people? How will we pass on the faith to future generations? What can we do to bring youth to church? These questions can be heard in many congregations as they ponder the challenge to attract younger people to worship. As congregations age and dwindle, it’s natural to wonder how they might […]

The post Generations of faith appeared first on Living Lutheran.

Where are the young people? How will we pass on the faith to future generations? What can we do to bring youth to church?

These questions can be heard in many congregations as they ponder the challenge to attract younger people to worship. As congregations age and dwindle, it’s natural to wonder how they might engage youth.

The answers may lie in intergenerational ministry. Those deeply involved in the field say that connecting generations is a good way to engage congregations, because all generations are part of the body of Christ.

“If we’re going to truly be the body of Christ, we need to have all generations in ministry,” said Linda Staats, a leader and educator in the field of intergenerational ministry. “God is present in every generation. When we don’t have each generation participating, we’re missing perspectives and values. It all comes down to being the body of Christ. I’ve never experienced as much Holy Spirit as when the generations are together.”

Staats, a baby boomer who grew up surrounded by her grandparents and great-grandparents, directs HomeGrown Faith, an online community and resource center supporting intergenerational ministry. She has worked with youth and educational ministries, served as assistant to the bishop in the Rocky Mountain and Grand Canyon synods, and coordinated the Generosity Project, an ELCA cross-generational, household-focused program to connect generations and create faith practices of generosity.

Staats defines intergenerational ministry as the intentional gathering of and interaction between all generations, with emphasis on the word “intentional.”

“Faith isn’t a hand-me-down,” she said. “We say God is present in every single generation, and we’re here to witness, embellish and support that. Every generation needs to make faith their own.”

In her work with congregations, Staats often gathers people from all generations in a circle to facilitate faith conversations. She also encourages pastors to ask questions at the beginning of worship about what generations are present. Who’s the oldest? Who’s the youngest?

Staats points out that, in the past, congregations segregated members by age. “Since the 1950s, the model for ministry was measured by your age. We have Sunday school rooms for 2-year-olds, 5-year-olds, youth group, etc. This model isn’t the body of Christ, and it’s only recently being challenged.”

Segregating the generations, she says, causes some of the tension felt by congregations today. “The older members are aghast at young people going to communion in torn jeans that they probably bought for $100 a pair,” she added.

Many congregations are now embracing intergenerational ministry by rethinking such programs as Sunday school, Bible study and devotion time. Connecting the generations can be a matter of reexamining congregational traditions. Staats advises congregations to replace their customary Youth Sunday with an Intergenerational Sunday. Sometimes simple activities or changes can make a difference, such as asking a cross-generational group to hand out bulletins at worship or putting rocking chairs in the back of the sanctuary so grandparents can rock their grandbabies.

When congregations bring people together to nurture lifelong faith, they find that each generation has something to offer. “Children pick up the importance of worship and rituals from adults,” Staats said, “and adults pick up the awe from kids.”

“My least favorite saying is, ‘Children are the future of the church,’” said Matt Byrd, pastor of Christ the King Lutheran Church in West Chester, Ohio. “They’re the church now. They can serve here and now with adults, who can share wisdom and insight and be welcoming and inclusive to children.”

Christ the King has focused on intergenerational ministry through its summer drama camp. Held instead of vacation Bible school (VBS), the camp unites multiple generations to produce a musical that’s performed in the sanctuary.

The congregation had already launched the camp in response to declining VBS enrollment when Byrd was called to Christ the King five years ago. “It was intentional,” he said. “The congregation was aging and evangelism through procreation wasn’t happening. So we considered how could we teach people about the arts, have kids and adults work together, and be together in worship space.

“One of the things about us is that we do a good job at discerning our gifts and how they can be used for ministry in the world. We have lots of creative and artistic people, and we still wanted to do outreach, so we came up with drama camp.”

The pandemic prevented the congregation from hosting the camp for the past two years, but prior to that it gathered about 25 adults, teens and children every summer to present a musical based on a Bible story.

Byrd said the camp uses his skills as both a youth minister and a college theater major. “It’s amazing the way God works and how the Holy Spirit calls us to use our gifts,” he said.

Past productions have covered the stories of Esther, David and Goliath, and Jonah and the whale. Drama camp regulars are now considering writing their own script based on a New Testament story.

“The beauty of theater is that anyone, at any age, can participate,” Byrd said. “We want everyone to have fun and joy in what they’re doing. The joy of being together and working toward a goal is where everyone wins. That sense of grace and joy as we celebrate as a community is phenomenal.”

The basis for the camp is 1 Corinthians 12:20-30, which discusses diversity and unity—and echoes Staats’ comments that all generations are needed in ministry to complete the body of Christ.

“Adults and kids working together is really important,” Byrd said. “The philosophy is that faith stays with kids if they have adults who can connect with them, specifically adults who aren’t their parents. Intergenerational ministry is a way to reinforce and teach stories of faith.

Kimberly Wilson, pastor of Our Savior Lutheran Church in Glen Head, N.Y., started a program for members called Blessing Buddies, which pairs children with adults who can serve as mentors and friends. After seeing a lot of children and grandparents separated by distance, as well as older members becoming less mobile and active, Wilson thought Blessing Buddies would be a way to integrate the generations.

“It’s making connections,” she said. “It’s everyone’s call to reach out to others, as Jesus said in the Great Commission. This is one way we can be intentional about doing it.”

Blessing Buddies, she explained, allows members to live out their baptismal vocation: “The church is meant to be a community where we raise our children in the faith, especially in a secular world.”

The adult buddies, who receive training before being paired with younger members, are often gratified by the companionship and the ability to share their faith, Wilson said, adding, “It’s about loving somebody.”

The program helps young people grow in their faith, Wilson said, and some of them have gone on to become active in campus ministries. One young woman was inspired to study vocal music by her Blessing Buddy, a voice enthusiast. Wilson said the young woman now sings and helps out at church during summers at home.

Blessing Buddies are encouraged to call one another or exchange a card or email once a month. Before the pandemic halted in-person events, the participants would meet at the church several times a year for activities such as arts and crafts. The buddies at Our Savior have partnered with the local Lutheran high school to pack meals for people in need, and Wilson encourages them to incorporate a service project into Blessing Buddies activities.

Lutheran outdoor ministries support intergenerational programs, with several offering camps for grandparents and grandkids. Jon Halvorson, executive director of Metigoshe Ministries in Bottineau, N.D., identified Grandparents Camp as one of its most popular programs: “It’s our first camp to fill up.” The camp has offered this three-day experience for 15 years.

The families share the typical camp experiences: lake activities, ropes courses, team-building, crafts, games, Bible study, devotions and campfires. This time together is important, Halvorson said, because families are scattered across the country and some grandparents and grandchildren can’t see each other regularly.

“It’s an important time for families to grow together in their relationship with one another, and to create space for family and faith conversations,” he said. “A quarter of our grandparents remember coming to camp themselves. We create a space to share stories and memories.”

Halvorson thinks that Grandparents Camp breaks down walls in an age when online technology sorts people into homogeneous communities. “We don’t spend time talking to people outside our own groups,” he said. “It’s nice for youth and adults to talk to each other.”

David Jarvis, executive director of Rainbow Trail Lutheran Camp in Hillside, Colo., agreed. He has seen interest in family camps grow over his 31 years at Rainbow Trail. The camp even offers a “camp grandparent” program in which adults 55 and older attend camp to serve as grandparent figures for a week.

“Camp plays out in so many ways,” he said. “It’s comforting for homesick kids who need the older generation; grandparents can do things that other people can’t.” The adults decide where they can do the most good during the day, Jarvis said, whether that means participating in an arts-and-crafts activity or just talking with kids.

“It’s cool to watch the relationships grow,” he said. “It’s a win-win when kids get to experience the other generations. Everyone has something to offer; that’s the real kick to make it all work. Just because you’re older and retired doesn’t mean you don’t have a lot to offer to the younger generations.”

All this underscores Staats’ primary message to congregations: “If you want to feel the power of the Holy Spirit, it’s when all generations are gathered. It’s very natural. If we’re going to have whole, healing, grace-filled, sustainable communities, it’s about gathering all the generations into the life and witness.”

The post Generations of faith appeared first on Living Lutheran.