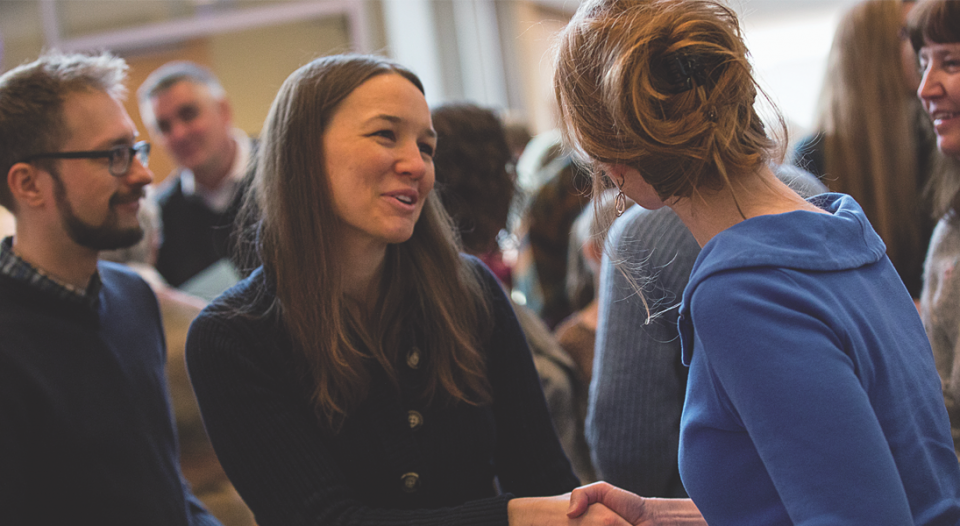 In many congregations, it looks like a simple, everyday greeting. People turn to one another and share a handshake, nod or hug while offering a few words about peace. To some, such gestures feel inappropriately casual, as if we’re taking a break from worship. To others, navigating what we hope is the end of the […]

The post A powerful ritual appeared first on Living Lutheran.

In many congregations, it looks like a simple, everyday greeting. People turn to one another and share a handshake, nod or hug while offering a few words about peace. To some, such gestures feel inappropriately casual, as if we’re taking a break from worship. To others, navigating what we hope is the end of the COVID-19 pandemic, they may seem risky and require adaptation.

Nevertheless, for several early Christians, sharing the peace was one of the most profound—even radical—worship practices. What is hidden in this simple-looking ritual? How can we understand what we’re doing when we share the peace today? What difference does it make for our daily lives?

Originally, sharing peace in worship was considered scandalous because in wider culture it was exchanged only between close family members in the privacy of a home. Early Christians understood the peace as a radical expansion of family ethics. John Chrysostom wrote that sharing the peace is the church’s “fuel of love” and happens “so that we may love each other as siblings [love] siblings, as children [love] parents, as parents [love] children.” Imagine a world today in which we sought the well-being of everyone as if they were beloved members of our family.

The promised future is here

You’ve heard the slogan in movements for peace and justice: “We are the ones we’ve been waiting for.” Early Christians must have felt the same way when they looked around in worship and saw members of their diverse assemblies sharing peace with one another.

In one of the earliest non-biblical accounts of Christian worship, philosopher Justin Martyr wrote that the ancient prophecy from Isaiah—“They shall beat their swords into plowshares, and their spears into pruning hooks” (2:4)—was now being fulfilled in the common life of Christians. Justin wrote, “We who formerly used to murder one another … now refrain from making war upon our enemies,” living in peace and no longer fearing death.

Are we, too, the ones Isaiah was waiting for, beating modern swords into plowshares? What does peace look like for you? Maybe it means preventing domestic or family violence, resisting state-sponsored violence, dismantling racism, working for restorative justice or confessing, repenting and forgiving sins.

Peace can feel fragile and vulnerable to violence. But in both Luke and John, the most emphatic greeting of peace is offered by the risen Christ after the powers of violence and death have unleashed their fury on him. The peace Jesus shares is the peace of resurrection, a sign that peace will have the last word over violence. During the Easter season some congregations make the connection clear through the call and response:

Alleluia! Christ is risen!
Christ is risen indeed, alleluia!
The peace of the risen Christ be with you always.
And also with you.

In the early church, the typical way to share the peace was through a kiss on the mouth. Unsurprisingly, the early church spent a lot of energy trying to keep this ritual from being misinterpreted or becoming abusive. Over time practices grew more diverse. Especially in the wake of the #MeToo movement and during the COVID-19 pandemic, we’re more aware of how we can harm one another through touch.

Today we can share the peace in ways that honor others’ physical boundaries and respect the integrity and health of all bodies. We can honor the space between our bodies with a simple bow, exchange simple signs of consent before we touch, and find ways to empower everyone—especially the most structurally vulnerable—to set boundaries on how and whether they will be touched. In all these expressions, our bodies give and receive the peace of Christ.

Among other religious greetings of peace

The Christian exchange of peace can help us appreciate the peace rituals of others. Especially on Fridays and Saturdays, Jewish people exchange sabbath greetings, including shabbat shalom (“peaceful sabbath”). You might notice Jewish people in your neighborhood walking to synagogue on the sabbath and wish them shabbat shalom.

A ritual exchange of peace is the most common everyday greeting between Muslims. This is normally spoken in Arabic, the language of the Quran: As-salamu alaikum (“Peace be with you”) is answered with Wa alaikum assalaam (“And peace be upon you too”). Sometimes the greeting is shortened to a simple salaam (“peace”). In Arab countries and among religiously mixed groups, the greeting is often exchanged by non-Muslims too.

Renewing the earth—and our courage

Early Christians connected this passage in John with the opening chapter of Genesis, when God breathes into creatures shaped from earth to give them the breath of life, and—even earlier, in the very first verses—when a wind from God sweeps over the waters, calling forth creation from the watery depths.

In addition, early Christians saw that Jesus’ gift of peace is like having the breath of life breathed back into us when terror has taken our breath away, like a re-creation of the good and fertile earth. Today, as the impacts of carbon-driven climate change become more deadly and terrifying, we may, like the first disciples, draw deeply on the peace of Christ that restores us for the work of healing and defending the earth.

For many of us it has looked quite simple: a little handshake, bow or hug, and peace, paz, salaam or shalom. But in it we can see a world of peace being born.

The post A powerful ritual appeared first on Living Lutheran.