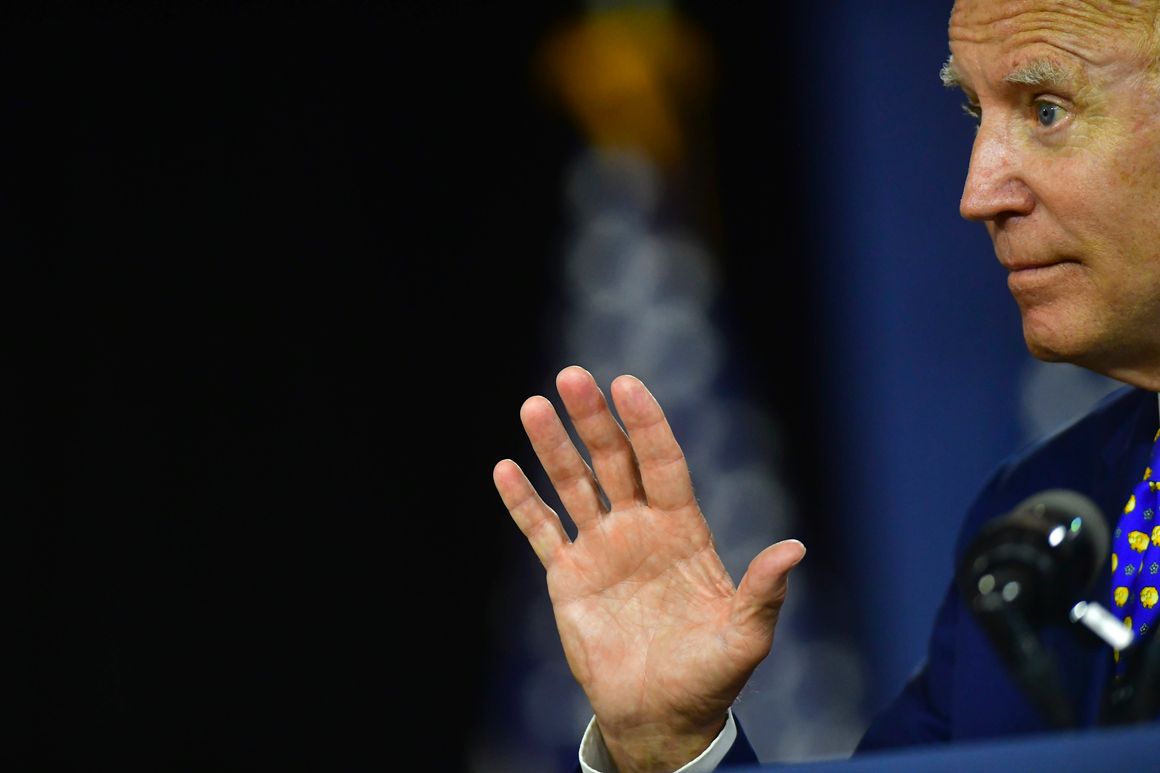 One thing is perfectly clear about President Donald Trump’s intensifying calls to postpone the November elections: He doesn’t have the constitutional authority to make it happen.

One thing is less clear, but just as important: Why would Trump even suggest putting off the vote? Unless he plans to occupy the White House illegally, a postponed election wouldn’t keep him in office. In fact, it could well usher in an unelected President Joe Biden.

That sounds strange, but it’s where the rules would take us if there were no election—if those rules were followed, which is a significant “if.” Here’s how it would work.

In the absence of an election by January, Trump’s time as president will end on January 20, 2021. Article II of the Constitution provides that a president is elected to serve a four-year term, and Trump’s four years will be up on that date. Without a new electoral mandate, he’s out.

Who, then, steps into the Oval Office if no election has been held? Not Vice President Mike Pence; his term also expires on January 20. So the presidency and vice-presidency would both be vacant.

Now things get weird. By statute, the person next in line for the presidency is the speaker of the House. But in a world with no election, the speakership would be just as vacant as the vice presidency. Just as Trump’s term will end on January 20, the current term of every member of the House of Representatives will end on January 3. The House of Representatives would have no members and couldn’t elect a speaker.

Who’s next? The answer, by statute, is the president pro tempore of the Senate. That office would not be vacant. Only 35 Senate seats are up for election in November; the other 65 Senators are now serving terms that extend beyond 2021. So even without an election, there would still be a Senate, though it would have only 65 members.

The next critical question, of course, is who that president pro tempore would be. By Senate practice stretching back to the 19th century, the most senior member of the majority party is selected as president pro tem. Today, it’s Iowa’s Chuck Grassley. If there is no election this fall, however, Grassley would no longer be in the majority party. Of the 65 Senators whose terms continue past 2021, and who would therefore compose the Senate after January 3 in the absence of a new election, 35 are Democrats.

By the usual rules—most senior member of the majority party—the president pro tem, and thus the president of the United States, would be Vermont’s Pat Leahy.

But the pro tem process isn’t a law. It’s just a tradition. And in a world this bizarre, where there’s no election, no president and no House, there’s no reason to assume the Senate Democrats would follow tradition. Legally, they can pick whomever they like. And if what they are really picking is the president of the United States, rather than a ceremonial officer, they might want to exercise some actual choice. They could elect President Amy Klobuchar or President Elizabeth Warren.

But would they? Neither the Constitution nor any statute restricts the choice of president pro tem to a current member of the Senate. (Similarly, the House of Representatives can decide to elect a speaker who is not a member of the House.) So the Senate Democrats could choose anyone at all with the constitutional qualifications to be president—that is, any natural-born U.S. citizen over the age of 35 other than Barack Obama, George W. Bush or Bill Clinton. If they were in a mood to right historic wrongs, they could choose Hillary Clinton. Or for that matter, Al Gore.

The most logical choice, though, would be Joe Biden. He is, after all, the person whom the Democratic Party will have named as its choice for president. He will have campaigned for the office, and he’ll have a transition team ready to go. He also happens to have good relationships with many of the 35 people making the choice.

So in the end, if no election is held this fall, and the process unfolds legally, the logical result isn’t that Trump stays in office. It’s that on January 3, Joe Biden becomes president pro tem of the Senate, and 17 days later, in the absence of a better claimant, Chief Justice John Roberts swears him in as president of the United States.


To be clear: None of this is going to happen. The House of Representatives under Nancy Pelosi is not going to approve a bill to postpone the election, and the Republican-controlled Senate wouldn’t want to do it either. Maybe Trump hasn’t fully thought through who would legally be entitled to the presidency next January if no election intervenes, but it’s a good bet that Senator Mitch McConnell has, or at least that he would, long before any bill to postpone the election came to a vote.

All this means, though, is that there will be no legally valid decision to postpone this November’s election. So why is Trump calling for a postponement? One possibility—and it cannot be ignored—is that he is laying the ground for a unilateral announcement of a postponed election. It wouldn’t be legally valid, but his experience as president so far has been that Congress rarely stops him from doing what he wants. And if Trump can bully the country into postponing the election, he may figure that when push comes to shove he will fill the void himself, by demagoguery or force.

Perhaps the most realistic explanation, though, is that Trump expects the election to occur on schedule and he is laying groundwork for impugning the integrity of its result. He knows Congress won’t postpone the election, and even he might think it’s too risky to try doing it unilaterally. But by constantly proclaiming that an election held on schedule cannot be trustworthy, he primes millions of people to be ready to refuse to accept the result of that election, if it goes against him.

That’s incredibly dangerous. It’s also a natural outgrowth of everything Trump has done so far, stretching back to his refusal as a candidate in 2016 to say that he would respect the outcome if he lost. So it is crucially important—as important as anything in American politics has ever been—that as many people as possible, in office and on the street, be prepared to stand up to him. And that they act between now and November in ways calculated to prevent us from getting to the point where law no longer matters.