Hall of Fame quarterback Joe Montana and his wife confronted a home intruder who attempted to kidnap their nine-month-old grandchild over the weekend, law enforcement officials confirmed on Sunday.

US President Donald Trump paid no federal income taxes in 10 of the past 15 years, according to a report in The New York Times.

Kids may say the darndest things, but parents tweet about them in the funniest ways. So each week, we round up the most hilarious quips from parents on Twitter to spread the joy.

My oldest wanted a juice box, so I told him to go pick one out. He came back with a bottle of apple cider vinegar, thinking it was apple juice.

So my question is how horrible of a parent am I that I just went along with it?

I love that when I’m telling my kids to stop fighting, I say “I’m not in the mood,” like if they tried me on a different day I might be cool with their bullshit.

“Wow. I’ve never seen someone get so much yogurt on their neck.”

Follow me for more suggestions on compliments to give your 2 year old.

My daughter says she’s not mad at me but she did just hug her dad and tell him, “I love you more than anyone” without breaking eye contact with me.

— my four year old today, regarding why he didn’t want to eat some fruit cobbler

I just wanna be naked and eat chocolate

Inspirational words from my 2 yr old in these difficult times

6-year-old: What if I accidentally used magic and my teddy bear became a real bear and attacked me?

Me: I don’t think that’s a real concern.

8yo: Your the best teacher I’ve ever had, Mom.

Me: *eyes well with tears* You’re.

Welcome to parenthood. Your refrigerator is now a graveyard of your kids’ half-finished drinks.

Me: We have bananas, apples, peaches, grapes and strawberries

My daughter is officially pulling this shit! I didn’t do this til I was 13. She’s downstairs with my mom. Told her to not use the dumpling doll for a head next time pic.twitter.com/DvXekXCLpr

My home decor can best be described as “kids live here”

Me *thinking of the gallon of sangria I’m about to make*: Gotta get in your daily servings!

Took my son to the eye doctor & was asked how much screen time I allow.

Child: I need help.
Me: Ok.
Child: There are 100 bees in a hive. 88% of the bees fly out. How many bees are still in the hive?
Me: Are they murder hornets?
Child: I dunno. Why?
Me: Well we might already be dead so it really doesn’t matter.
Child: [writing]
Me:
Wife: Why do this.

Art teacher: draw a picture of your proudest moment and make it as detailed as possible so we can learn about each other

I’m hiding from my kids in the closet so I can peacefully eat some cookies. I can hear them all walking around like a bunch of DEA agents. I’m trying my best to destroy all the evidence before they bust me.

Playdates were invented to force parents into cleaning their home

On our walk this morning I mentioned that my legs were sore.

Me: Daddy is strong…and I’m not THAT heavy!

Please keep my 4yo in your thoughts

There’s nothing wrong with her, she just inherited her father’s sneeze

Dwayne “The Rock” Johnson cooked up his first-ever presidential endorsement with one for Democratic presidential nominee Joe Biden and his running mate, Senator Kamala Harris of California.

The self-described “registered independent with centrist ideologies” has voted for both parties in the past, but the “Fast and Furious” franchise star remained silent on his political beliefs for much of his career.

But ahead of this “critical presidential election,” Johnson made it clear: He’s backing Biden and Harris come November.

Johnson sat down with the duo in a virtual conversation via his YouTube channel Sunday. “It’s DJ,” Biden said at the start of the video with Harris, who added that she’s a “huge fan” of Johnson’s films and cited his “Fast and Furious” films and “Jumanji” as her personal favourites.

As a political independent & centrist, I’ve voted for both parties in the past. In this critical presidential election, I’m endorsing @JoeBiden & @KamalaHarris.

We must ALL VOTE: https://t.co/rZi1mxh8DCpic.twitter.com/auLbc8xDBv

The former WWE wrestler went on to praise the presidential hopeful’s experience and political career, commending Biden for leading with “great compassion and heart and drive, but also soul.”

Johnson then dubbed Harris a “certified badass” for her work as California’s attorney general, with a special mention of her approach during Senate hearings.

Asked by Johnson about how the two plan to “earn the respect of all the American people,” Biden offered a direct response about restoring accountability to the White House.

Harris also drilled down on reestablishing trust with voters.

Harris added: “That has to be part of the core of what we do as we go forward because, to your point, we’re facing as a country so many challenges, and people are grieving.

“I mean, people are grieving the loss of life, the loss of jobs, the loss of certainty, the loss of normalcy. And to heal and get through this, we’re gonna have to be honest about what healing will require,” she said.

The sentiment hit home with Johnson, who revealed earlier this month that he and his family were recovering from COVID-19 after testing positive weeks ago.

“When you’re honest with a scenario and people who you care about, … it leads right into making progress but through a humanity,” he said.

Johnson previously expressed interest in a political career, calling his potential candidacy for president a “real possibility” back in 2017. He has since buddied up to former Democratic candidate and unabashed “Ballers” fan Senator Elizabeth Warren of Massachusetts, with the two frequently showing each other love on social media.

Never miss a thing. Sign up to HuffPost Australia’s weekly newsletter for the latest news, exclusives and guides to achieving the good life.Demi Lovato’s quarantine engagement to Max Ehrich has gone the way of most things in the y…

The mother of two of the Thunder River Rapids ride victims says today’s sentencing of Dream World parent group Ardent Leisure won’t change “the nightmare she has been living” over the past four years.

US President Donald Trump on Sunday again baselessly suggested that his presidential opponent, Joe Biden, is doing drugs and tweeted that he “will be strongly demanding” that the former vice president take a drug test “prior to, or after” their first debate against one another on Tuesday.

“His Debate performances have been record setting UNEVEN, to put it mildly. Only drugs could have caused this discrepancy???” he tweeted. He said that he would agree to take a drug test, too.

Trump didn’t specify which drug Biden should be tested for or to whom he is making his demand. But his allegation mirrored one he made in an interview with Fox News last month.

This appears to be Trump’s latest attempt to weaponise mental health and to sow public doubt about his opponent without any supporting evidence.

I will be strongly demanding a Drug Test of Sleepy Joe Biden prior to, or after, the Debate on Tuesday night. Naturally, I will agree to take one also. His Debate performances have been record setting UNEVEN, to put it mildly. Only drugs could have caused this discrepancy???

Biden has dismissed Trump’s accusations and called him “a fool,” adding that he looks forward to their debate. He declined to comment Sunday when asked about Trump’s latest accusation and test request.

Trump’s comments come despite public concerns about his own physical and mental fitness and speculation about recent drug use within his own family.

Trump does not smoke or drink alcohol, and his physician has reported that he is in good health. But his health has come under public scrutiny because of what appears to be an unhealthy lifestyle. He also made a mysterious visit to the hospital last fall.

Trump has a well-documented penchant for fast food and is classified as obese, leads a sedentary lifestyle and even reportedly said that the human body has a “finite” amount of energy resources that exercise depletes.

Trump made an unannounced visit to Walter Reed National Military Medical Center last November that raised doubts about his mental and physical health. He insisted that the visit was for a routine physical. 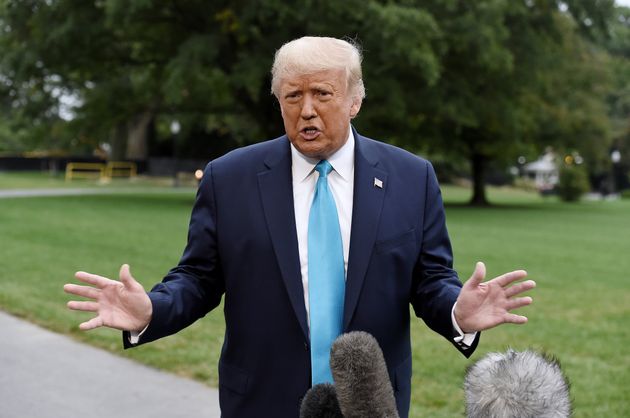 Earlier this month, Trump’s physician released a statement at the president’s request that denied that Trump had been evaluated for a “stroke,” “ministroke” or any heart emergency after new speculation emerged about his health.

Over the summer — in response to accusations in Michael Wolff’s tell-all book, “Fire and Fury: Inside the Trump White House,” that Trump was unfit for office — Trump argued that he was mentally fit by pointing to his passing score on a cognitive test. But the test was one used to assess dementia or other cognitive decline and not IQ or intelligence. After Trump boasted that he aced the test and that doctors lauded his performance as “amazing,” critics ridiculed him, pointing out that the test was meant to be easy.

Biden, a fellow septuagenarian, is roughly three years older than Trump, who is the oldest person to assume the presidency. A physical released by Biden’s doctor last week showed that, despite his age, Biden is in good health and nowhere near slowing down. Doctors credit his good health to Biden’s exercising at least five days a week and not smoking or drinking alcohol. 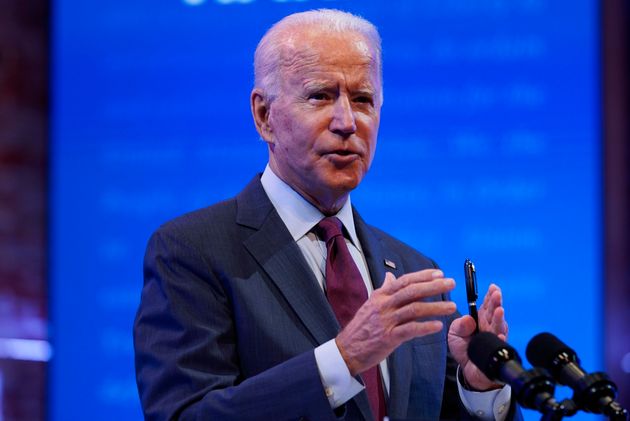 With just weeks to go before the Nov. 3 election, questions have come up about whether Trump’s attempts to delegitimize Biden and cast him as unfit for office may actually hurt the president.

Trump has repeatedly argued that Biden is incompetent and will be unable to argue or respond in the upcoming debates. A Trump campaign ad shows a series of edited clips that appear to show Biden stumble with his words in interviews and at campaign events. “Geriatric mental health is no laughing matter,” the ad said.

But Biden delivered a live speech at the Democratic National Convention last month without issues, leading critics to falsely accuse him of having pretaped the speech. Those critics argued, despite evidence to the contrary, that Biden is incapable of reading anything from a teleprompter for more than 20 minutes without messing up.

“In trying to message that Biden may be unfit for office, the campaign also may have lowered expectations on his debate performance,” Brett O’Donnell, a Republican strategist who has coached candidates ahead of debates, told The New York Times. O’Donnell said the strategy may be an unintentional gift to the Biden campaign.

Residents of eight cities in the US have been alerted that a brain-eating amoeba was found in a southeast Texas water supply, leading one of the towns to issue a disaster declaration.

But the major roadblock to getting the economy back on track was the reopening of internal borders, says the deputy prime minister.

A US man visiting a state park has made the discovery of a lifetime, but for him, it was years in the making.

Icy winds will continue across several states and territories this week as the Top End experiences its wettest September month in decades.

Melburnians have woken to a bit more freedom this morning, as the city’s tight curfew was lifted overnight.