There’s no bad blood between Taylor Swift and her ex-boyfriend, Joe Jonas!The 30-year-old singer opened up about the creation of her most recent album Folklore in her new Disney+ concert film, Folklore: The Long Pond Studio Sessions.In the special, Swi…

Jennifer Lopez has unveiled more than just the cover art for her new single ‘In The Morning’ — she posed completed nude for the photoshoot, too.The 51-year-old shared the image with her 133 million Instagram followers just three hours ago and already i…

The legends of Aussie music

Lori Loughlin and Mossimo Giannulli have both coughed up the fines for their roles in the college admissions scandal.According to documents obtained by Us Weekly, the pair have paid their fines “in full.” The Fuller House alum, 56, handed over the US$1…

Jamie Dornan is reflecting on his time filming the Fifty Shades franchise.Dornan, 38, who played Christian Grey in the blockbuster films, described an incident where he received some disturbing fan mail.Dornan told Variety he was sent, “a collage of ph…

The wrath of God may be powerful — but the wrath of Yelp reviewers might come a close second.

A plumbing company in North Carolina found its rating sinking faster than Noah’s neighbors on Wednesday after a video began circulating purporting to show an employee being fired for refusing to pray.

The clip, shared on Reddit, appears to show the owner of Aurora Pro Services in Greensboro telling his employees in the parking lot that they have to participate in company mandated prayer.

“You’re getting paid to be here. This is our first core purpose. So if you don’t want to participate, that’s okay. Leave your stuff here, you don’t have to work here. It’s not an option.”

When one employee objects, he is cast out.

“Well you can’t work here,” he tells him. “So what are you going to do? Listen, you can go get an attorney, leave your stuff here — we’re done.”

Within hours, the internet did its thing and began leaving reviews on the company’s Yelp page — and they weren’t exactly high praise.

“Why am I leaving Aurora Pro Services a bad review? Jesus told me to. It is my first, core purpose. After engaging in voluntary prayer, the Lord has shown me the light. Aurora Pro Services is an unjust and unfair company that enforces their beliefs on others and treats their employees poorly,” one wrote.

“Wouldn’t provide service unless I joined them in prayer. So I agreed but they got super scared when I lit a pentagram on fire and began chanting. Just left without a word,” another recalled.

“Denied me service because Jesus isn’t my homeboy,” a third claimed.

“I need someone to fix my roof. Guy said only thoughts and prayers will fix the problem,” a fourth added.

Many pointed out that according to US employment law, sacking someone over their religious beliefs (or lack thereof) is illegal, and predicted the company was destined for a big lawsuit.

“Personally, I’m a follower of the Catholic Church. Haha jk religion is for children. This guy needs to be sued to the end of the world and back. Forcing your religion on others is illegal as all hell you idiot,” one more barbed.

“I could call the owner a bunch of things, but broke is probably the best descriptor of what he will be once he has to pay for the settlement for discrimination and wrongful termination,” opined another.

“I almost feel bad for them. They did this to themselves. God hates people who interpret his words for hatred. Jesus said turn the other cheek. Neither said fire people who don’t wanna pray. Y’all are stupid. Hope they owner has enough money to pay his former employee,” said a third.

One reviewer quoted a Bible passage, from the Gospel according to Peter:

“So I exhort the elders among you, as a fellow elder and a witness of the sufferings of Christ, as well as a partaker in the glory that is going to be revealed: shepherd the flock of God that is among you, exercising oversight, not under compulsion, but willingly, as God would have you; not for shameful gain, but eagerly; not domineering over those in your charge, but being examples to the flock.”

The plague of bad reviews was so torrential, it (correctly) triggered Yelp’s new suspicious activity feature that prevents people from reviewing based solely on media reports.

According to the company profile on Yelp, Manager Oscar David “is serving God by creating a culture that so far is changing the lives of the men and woman of the organization.”

“Every morning our company starts their day with the reading of the Holy Gospel, a prayer, we listen to our CORE Values and in unity pray for someone who needs healing.”

Indeed on its Facebook page, Oscar films himself every day preaching the Gospel — and in Wednesday’s he correctly predicted the extra attention the viral firing video was about to bring:

“A very good morning to you — and to all of these extra viewers that we are about to have,” he began, before reading an apt passage from Luke’s Gospel… about religious persecution.

Warning that some of those who profess their faith in Jesus will be put to death, he quotes: “You will be hated by all because of my name, but not a hair on your head will be destroyed”.

TooFab has reached out to Aurora Pro Services for comment.

2020 has been a trying year for all of us, but one thing most entrepreneurs have learned how to do was pivot to meet their clients/customers’ needs. COVID-19 has revamped the way many businesses serve their customers in a way that’s safe and efficient. Roommates, we know how important it is to get your hair […]

The post Black Woman Creates The Only Drive-Thru Beauty Supply Store In Statesboro, GA appeared first on The Shade Room.

This celeb gets his “stamp of approval.”

Wild ride! Artem Chigvintsev detailed his rocky year and personal struggles ahead of winning Dancing With the Stars with partner Kaitlyn Bristowe earlier this week. “What a ride, what a Journey,” Chigvintsev, 38, wrote in a heartfelt Instagram post on Wednesday, November 25. “Firstly I want to start with a huge thank you 🙏🏻 to […]

Coping with change. Jax Taylor opened up about how he has been there for wife Brittany Cartwright as her body transforms due to her pregnancy. “What I think is extremely important and what I’m going through now with Brittany is just reassuring Brittany how beautiful she is,” the Vanderpump Rules star, 41, explained during the […] 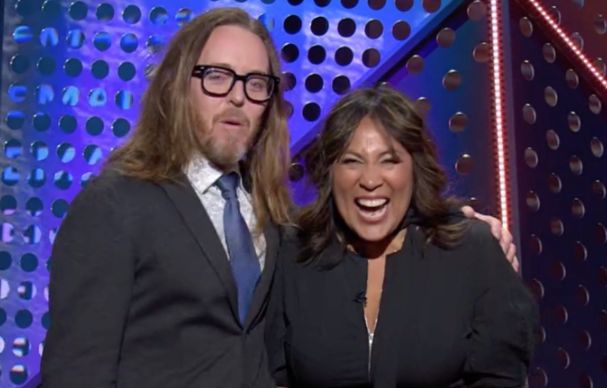 The ARIAs Awards copped criticism in 2019 for cutting powerful acceptance speeches and snubbing diverse artists from the TV broadcast – a contrast to the 2020 show indeed.

Australia’s annual music awards on Wednesday did not hold back or censor the ceremony – even letting two F-bombs go to air when Tim Minchin and Kate Ceberano presented the Best Female award.

While discussing the devastating impacts COVID-19 left on the shuttered live music industry, the two presenters urged the Australian public to support local musicians by going to gigs when tours start again.

A stunned Kate replied, “That’s right! Buy a fucking ticket” followed by a lot of giggles and a hug from Tim.

The Melbourne-based artist, who was born in Zambia and raised in Botswana, called out systemic racism in the music industry during her ARIA performance filmed in Botswana.

She called for greater diversity amongst music industry leaders and took aim at the ARIAs for cutting her acceptance speech from the live broadcast last year.

“This industry, for people like me. Diversity, equity in your ARIA boards,” she rapped. “To my people I say… we are our own. Freedom.”

The artist then referenced Australia’s troubling history and treatment of First Nations people, before mentioning last year’s incident where her award was announced during an ad break.

“In a country that pretends to not see Black, to not see its origins and its past, not only do Black visionaries make you see, but made it clone who created human history,” she said.

“And when we win awards they toss us in ad breaks. Is that history lost? Can’t remember what you forgot. Is it free?”

Last year Sampa became the first woman of colour to win the Best Hip Hop Release category for ‘Final Form’. However, her powerful acceptance speech about diversity and inclusivity was cut from the show.

This year’s event had no red carpet and no audience with Delta Goodrem hosting live from Sydney’s Star Casino and awards presented from the stage to artists via Zoom.

Some performances were pre-recorded including Sia from the US and Sam Smith from London’s Abbey Road Studios.

Big winners included Tame Impala who won Album of the Year for ‘The Slow Rush’ and Archie Roach who was inducted into the ARIA Hall of Fame.

The showstopper moment of the evening was the tribute to the late Helen Reddy; a special rendition of ‘I Am Woman’ sung by a lineup of Australia’s top female talent including Amy Shark, Tones and I, Kate Ceberano, Christine Anu and Marcia Hines.

See the performance below:

I Am Woman. A tribute to Helen Reddy. 🙌 #ARIAspic.twitter.com/OfVaVRfbCa

Alicia Vrajlal contributed to this report.

If there was every a year to buy an air purifier it’s 2020, and Amazon has some great deals for Black Friday happening now — details