Leonardo DiCaprio typically keeps his romances out of the public eye … and on some luxury yacht charting through the Caribbean.But the Oscars aren’t just any awards show, and DiCaprio’s girlfriend, actor and model Camila Morrone, apparent…

Eminem surprised the audience with an appearance and performance of “Lose Yourself” at the 92nd Academy Awards.

On Sunday, eighteen years after the song came out, the rapper had a decent chunk of Hollywood singing along with him as he performed his hit from the 2002 film “8 Mile.”

Eminem performing ‘lose yourself’ at the #Oscars the Celebs in the audience trying to rap along got me laughing 😂😂😂pic.twitter.com/CQ70a28XmU

#Eminem performing ‘Lose Yourself,’ which won Best Original Song at the 75th Academy Awards, at the #Oscars tonight. 🎤 pic.twitter.com/UioaaXdjWD

The performance came on the heels of a montage to iconic songs in film history, including “Lose Yourself,” which won the Oscar for Best Original Song in 2003.

While Eminem earned a standing ovation and cheers from the crowd, many in the audience appeared puzzled over why the 47-year-old was gracing the stage. Notably, Idina Menzel offered this incredible reaction:

tfw u lose urself in the music pic.twitter.com/aMUv4Ibgc7

The performance was also met with quizzical remarks on Twitter:

Wait…. Eminem had a surprise performance on the Oscars? pic.twitter.com/IfSTwtAEME

The cuts to the audience during this Eminem performance. #Oscarspic.twitter.com/iy6gnNhmHQ

Eminem on stage at Oscars singing from 8 mile.

Can someone please explain to me why Eminem is performing at the Grammys…I mean…#Oscars
lmao pic.twitter.com/yx9hcTGlZx

the reactions to that Eminem performance were so good #Oscarspic.twitter.com/981WiI8mix

Eminem, born Marshall Mathers, offered an explanation for why he appeared at the awards show in a tweet after the performance.

Since he had not been present to accept the Oscar he won in 2003, he suggested that this was his second “shot.”

“Look, if you had another shot, another opportunity…,” reads the tweet, quoting opening words to “Lose Yourself.”

Look, if you had another shot, another opportunity… Thanks for having me @TheAcademy. Sorry it took me 18 years to get here. pic.twitter.com/CmSw2hmcZo

Eminem’s performance also comes on the heels of his latest album release, “Music To Be Murdered By,” which dropped last month.

Kristen Wiig turned up at the 2020 Academy Awards Sunday in an ensemble that was one of the night’s most divisive looks.

The “Bridesmaids” star appeared at the ceremony in a red gown accentuated with side ruffles, pairing it with black opera gloves. The narrow, form-fitting shape of the dress had Twitter users comparing the look to everything from a lobster to the red carpet itself. 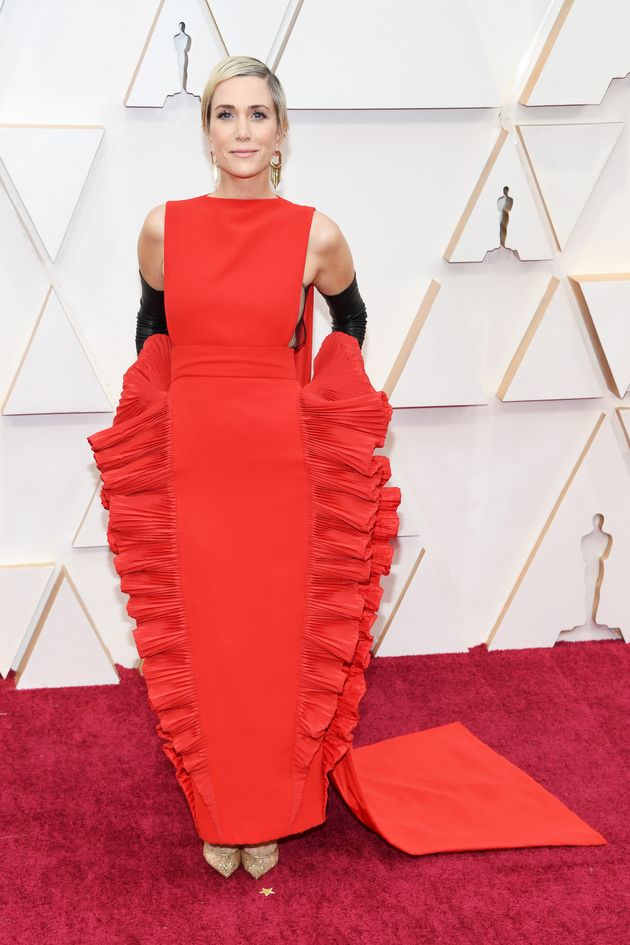 Many people compared Wiig’s dress to the one Emily Blunt wore at the 2019 Screen Actors Guild Awards, which bore pink ruffles, and likened it to, well, a vagina.

The most popular interpretation, however, was that the dress was shaped like a plate of lasagna.

I love these dresses! Kristen Wiig looks like a piece of lasagna! 😃 #Oscars

I can’t with Kristen Wiig and this dress. Serving lasagna realness?? pic.twitter.com/0Q4P8BjLhp

Kristen Wiig’s Oscar dress will henceforth will be known as the Lasagna Dress. pic.twitter.com/EwqQwL78XO

Kristen Wiig is dressed like she’s about to do a Ruveal pic.twitter.com/c6OqnKWTmN

Wiig presented the award for Achievement in Costume Design on Sunday alongside “Bridesmaids” co-star and fellow comedian Maya Rudolph. Wiig returns to the big screen alongside Gal Gadot in “Wonder Woman 1984,” due out in June.

“Hair Love” director and writer Matthew A. Cherry addressed the importance of normalising Black hair during his acceptance speech on stage at the 92nd Academy Awards.The short animated film, which tells the story of a Black father who wears…

That’s how you open a show.

In a performance that included everything from placing a hat on Tom Hanks’ head to putting Leonardo DiCaprio on the spot to sing, Janelle Monáe celebrated queer artists, Black History Month and called out the Academy for the Oscars being, well, so white, in the opening of the 92nd Academy Awards.

Janelle Monáe came and did what she had to do. #oscarspic.twitter.com/AocAH1U0sJ

Monáe started the musical extravaganza with a Mr. Rogers-inspired opening and was later joined on stage by Billy Porter and dancers representing nominated films. However, the moments that stood out the most were the singer’s pointed statements made throughout.

“It’s time to come alive because the Oscars is so white,” sang Monáe during one moment, referencing the hashtag and social movement started in 2015 by BroadwayBlack.com managing editor April Reign.

Janelle Monae on stage at the Oscars, surrounded by people dressed as characters from snubbed films: “It’s time to come alive because the Oscars is so white!” pic.twitter.com/bZMrffBcl9

“Tonight we celebrate all the amazing talent in this room,” Monáe said in another moment. “We celebrate all the women who directed phenomenal films. And I’m so proud to stand here as a black queer artist telling stories. Happy Black History Month.”

The 2020 Oscars is so white you need to wear sunglasses when looking at the nominees. As HuffPost’s Marina Fang pointed out, “Out of the 20 acting nominees, only one actor of color, ‘Harriet’ star Cynthia Erivo, was included.”

Additionally, no women were nominated for Best Director, again.

None of that is shocking, considering the Academy’s history. However, no one was expecting Monáe, or anyone really, to call that out in the show’s opening.

In 2019, the Oscars went hostless after Kevin Hart’s old homophobic tweets were surfaced online, but the Academy had an easy fallback plan. That year, the Freddie Mercury/Queen biopic “Bohemian Rhapsody” was nominated for Best Picture, paving the way for Adam Lambert and the surviving members of Queen to open the ceremony.

This year was different. Like the Best Original Song nominee from “Frozen 2,” the opening of the hostless 92nd Academy Awards was going “into the unknown.” But with Monáe leading the way, there’s nowhere else we’d rather be.

WASHINGTON (AP) — A man carrying a knife was arrested outside the White House after he told a U.S. Secret Service officer that he was there to kill the president, police said.Roger Hedgpeth, 25, was arrested Saturday afternoon on a charge of maki…

Teenagers are sleep-deprived. Along with their dealing with their changing bodies, hormones wreaking havoc on their emotions and impulses, and facing down the pressure of school (including early start times), university admissions, and career paths, th…

A visibly emotional Brad Pitt won his first-ever acting Oscar on Sunday night, dedicating his award to the six children he shares with ex-wife Angelina Jolie.

The actor picked up the award for his performance in “Once Upon a Time in Hollywood” in the Best Supporting Actor category, besting screen veterans Tom Hanks (“A Beautiful Day in the Neighborhood”), Al Pacino (“The Irishman”), Joe Pesci (“The Irishman”) and Anthony Hopkins (“The Two Popes”).

After hugging co-star Leonardo DiCaprio, Pitt took to the stage to deliver an understated and moving speech about his decadeslong journey through the entertainment industry.

“I’m not one to look back, but this has made me do so … all the wonderful people I’ve met along the way, to stand here now ― ‘Once Upon A Time In Hollywood,’ ain’t that the truth,” he said.

“This is for my kids, who color everything I do,” he said. “I adore you. Thank you.”

Pitt and Jolie, who divorced in 2016 after two years of marriage, were locked in an acrimonious custody battle long after their relationship ended. The two reached a final agreement over the custody of their children in November 2018 after years of bitter negotiations in and out of the public eye.

Pitt has become something of an awards show darling this year, dominating the competition at the Screen Actors Guild Awards, the Golden Globes, the British Academy Film Awards and essentially every other ceremony for his turn as over-the-hill stuntman Cliff Booth in the Quentin Tarantino-directed feature.

And, of course, his legitimately funny acceptance speeches, in which he’s joked about everything from his difficult marriages to his co-star “LDC,” have raised expectations for his time on the Oscars stage.

He did make some cracks during his Oscar speech, referencing President Donald Trump’s impeachment trial and the blocking of John Bolton’s testimony.

“They told me I only have 45 seconds up here, which is 45 seconds more than the Senate gave John Bolton this week,” Pitt said. 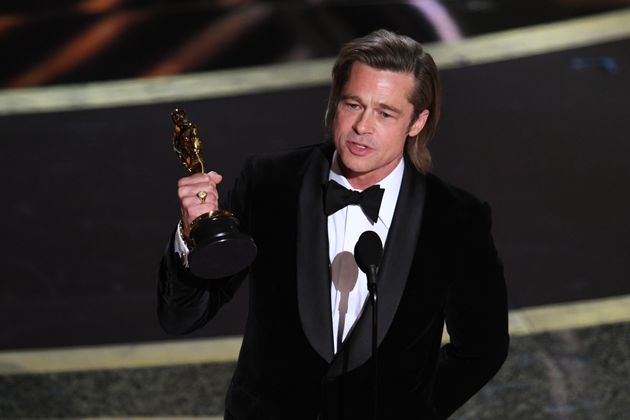 He also paid tribute to director Tarantino, adding that “the film industry would be a much drier place without you.”

For Pitt, it’s been on a long and winding road to his first acting Oscar win. The 56-year-old previously won an Academy Award in 2014 for producing “12 Years a Slave.” He’s been nominated for six previous trophies at the awards show, scoring his first nod in 1996 for Best Actor in a Supporting Role as Jeffrey Goines in the drama “12 Monkeys.”

The Academy overlooked Pitt’s performances for more than a decade after his first nomination until 2009′s “The Curious Case of Benjamin Button,” but he lost to Sean Penn for Best Performance by an Actor in a Leading Role. In 2012, he received dual nominations for starring in and producing the baseball drama “Moneyball” before finally taking home a trophy for the Steve McQueen-directed drama two years later. Pitt’s sixth Oscar nomination came from producing “The Big Short,” which was nominated in 2016 for Best Picture but ultimately lost out to “Spotlight.”

A gang of armed youths have terrorised employees and customers during a violent supermarket hold-up in Melbourne’s south-east.