The Australian Greens welcome the recent announcement by the Chief Prosecutor of the International Criminal Court that she believes the court has jurisdiction in the West Bank, including East Jerusalem and Gaza, so that it can investigate war crimes allegedly committed in Palestine since 2009. “Australia appears to have found itself on the wrong side … Continue reading “Greens welcome ICC Chief Prosecutor’s announcement on Palestine”

Australian Greens Education spokesperson Senator Mehreen Faruqi has labelled the government’s latest change to JobKeeper eligibility rules farcical and sinister as it bends over backwards to deny wage subsidy support to Australian universities. In the latest twist, Sydney Uni has been denied access to the scheme despite having believed to have qualified due to a significant drop … Continue reading “Government Bending Over Backwards To Deny Higher Ed Support”

Minister for Police and Emergency Services David Elliott and NSW RFS Commissioner Rog Rogers today honoured four brave individual members and five units as part of the annual St Florian’s Day awards for exceptional service and bravery. Usually held on the fourth of May each year, the award ceremony coincides with the Feast Day of … Continue reading “FIREFIGHTERS HONOURED ON ST FLORIAN’S DAY”

The NSW Government has purchased almost $1 billion of personal protective equipment (PPE) to help contain the spread of COVID-19 and protect frontline emergency workers, medical staff and the public. The stockpile – containing hundreds of millions of pieces of protective equipment – is being held in a number of secure facilities in secret locations … Continue reading “ALMOST $1 BILLION OF PPE SECURED FOR COVID-19 BATTLE”

More than 3,000 new homes, a new primary school and town plaza in Sydney’s North West have been given the green light today, with the NSW Government approving the concept plans for Ivanhoe Estate. Planning and Public Spaces Minister Rob Stokes said the approval paved the way for construction to begin on the project, which … Continue reading “GREEN LIGHT FOR THOUSANDS OF NEW HOMES THANKS TO FAST-TRACKED APPROVAL”

The NSW property market will roll out the welcome mat from next weekend with agents and vendors able to hold traditional property inspections and on-site auctions after a six-week limited shutdown due to COVID-19. Treasurer Dominic Perrottet and Minister for Health Brad Hazzard said the relaxing of restrictions was a sign of the ongoing success … Continue reading “NSW READY TO REOPEN FRONT DOOR ON PROPERTY INSPECTIONS AND ON-SITE AUCTIONS”

A unanimous Parliamentary report on the National Redress Scheme for survivors of child sexual abuse has recommended significant changes including advance payments for vulnerable survivors. Deputy Chair of the Joint Select Committee on Implementation of the National Redress Committee Sharon Claydon said that the Morrison Government, having failed to deliver on so many key aspects … Continue reading “GOVERNMENT MUST ACT ON UNANIMOUS REDRESS REPORT”

Federal Member for Newcastle Sharon Claydon has encouraged Novocastrians to download the Federal Government’s COVIDSafe app to help stem the spread of the virus and meet the criteria for restrictions to be eased. Ms Claydon made the plea after the Government made the rollback of restrictions contingent on widespread uptake of the app. “Too many people … Continue reading “MP URGES NOVOCASTRIANS TO DOWNLOAD COVIDSAFE APP”

For many Muslims around the world observing Ramadan, big lively gatherings for meal times and large dinner table spreads aren’t happening because of the COVID-19 pandemic.

While virtual suhoors and iftars make it possible to share social connections, the meals themselves are often being eaten by smaller groups or enjoyed solo.

Ordering halal takeout may be a good fall-back plan for some meals (and small business support is more important than ever), but not every dish.

Toronto-based registered dietician Sana Motlelkar told HuffPost Canada that for this Ramadan, mindful eating will need to be especially important, as it’s easy to overeat when alone. Instead of focusing on feeding as many mouths as possible, it may be better to focus on making quality recipes during Ramadan — after all, there’s more time for long, slow-cooking recipes now — and slowing down your meal times too.

“If you’re not really savouring that meal when you open your fast, it’s so easy to overeat and you’re not going to enjoy it,” she said. “Slow down, savour it, and enjoy every bite.”

What people break fast with plays a big role in how their bodies will sustain themselves this month. Motlekar said she tells her clients to keep a mental checklist when they conduct their weekly or bi-weekly grocery shopping.

Ramadan meal-planning during a pandemic

Suhoor, the first meal of the day before sunrise, should include protein, fats, and complex carbs, Motelkar said. The three components release slow, steady energy throughout the day. Fibre and protein can make you feel fuller too.

Preventing dehydration with hydration-rich foods and drinks is also important, which is why she cautioned against too much coffee or tea during suhoor, as caffeine is a diuretic.

“If you eat foods with a high potassium content, that helps with hydration,” she noted. 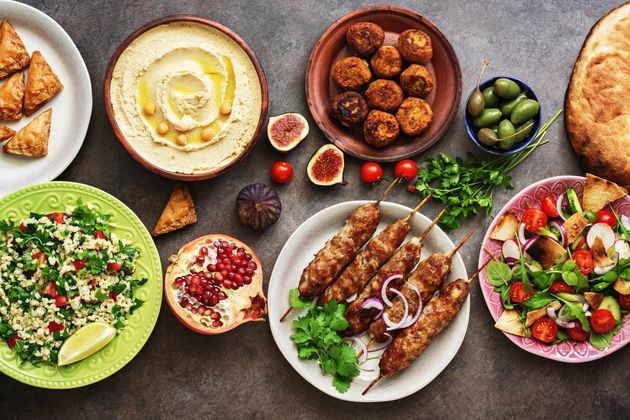 For iftar, the meal after sunset to break the fast, she recommended high-quality proteins, healthy grains, and soups to replenish the body from the day’s fasting.

For both these meals, she encouraged paying attention to portion sizes. Someone who had a healthy active lifestyle before the pandemic and is now more sedentary won’t need to load up for energy as much as they used to.

We asked Motlekar to share what pandemic pantry staples are her favourites for iftar and suhoor:

Empty shelves in the meat section can be disheartening for omnivores. If you’re finding it hard to buy proteins like chicken, fish, or beef from your supermarket, Motlekar said frozen options can provide the same nutritional content.

Previous down-sides to frozen meat, such as the many hours they take to thaw, won’t be a problem now; being home means it’s easier to accommodate longer preparation times.

But that doesn’t mean you should throw any item into your shopping cart. When buying frozen, look out for freezer burn, especially on white fish. 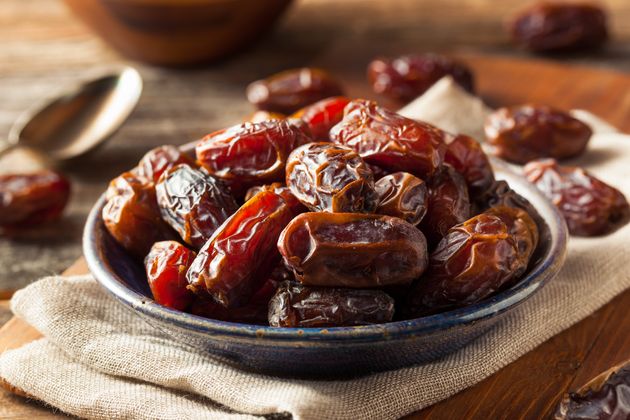 Many Muslims open fasts with the dried fruit already in many households, which Motelkar applauded.

“It has a lot of potassium and quick energy [because of its sugar content],” she said. “Dates with a little water or milk can help with managing your electrolytes.”

Fresh fruits are usually still available in supermarkets, as are dairy products and nuts.

“The yogurt [and nuts], that’s a really good source of slow-digesting protein. Paired with bananas, which are quite rich in potassium, they really help with managing thirst and hydration.”

Homemade granola might also be a great addition; many recipes call for ingredients that may already be in your kitchen, like oats and maple syrup.

Can’t help drinking your cup of joe? Pairing it with chia seeds made in an overnight pudding can replenish lost hydration. “It’s a great option with lots of soluble fibre and hydrates you really well.”

Have you joined in on quarantine baking? If you’ve got a ton of leftover carbs, you’ll be pleased to know that bread will serve you well for meal time.

Just make sure your bread is made with a quality flour: Breads made with 100 per cent whole wheat flour are packed with high-fibre content, vitamins, and minerals.

However, if you’ve run out of yeast, there are plenty of unleavened pastry alternatives, like no-yeast naan, that can serve as vehicles for your main meals.

Watch: Our pandemic baking binges are causing a yeast shortage. Story continues below.

Sourdough starters are good alternatives to yeast, or otherwise you may find luck grocery-shopping for pre-made mixes. 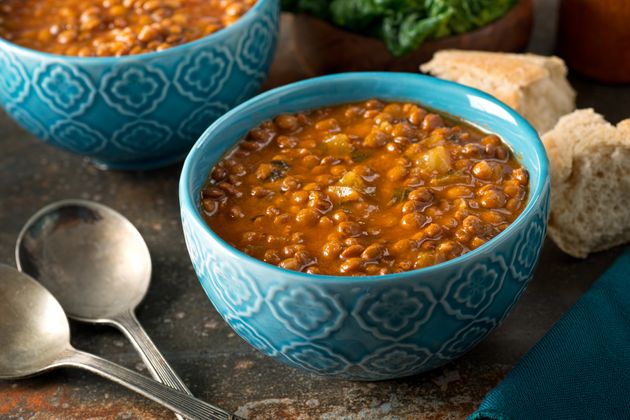 Lentils are popular in many Muslim cultures, Motelkar noted. The canned or dried goods are also affordable non-perishables that are worth stocking up on, versatile in soups, stews, and curries; should they be out-of-stock, fava beans are also a good option for savoury chowing. 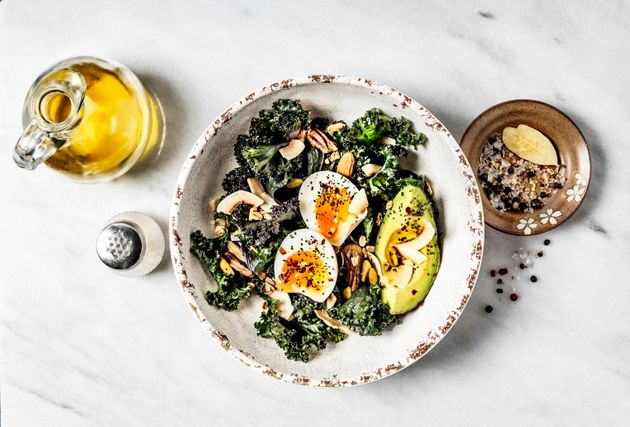 Both solid sources of nutrients, eggs are cheap sources of protein that can be incorporated in almost any dish, while avocado provides potassium and have high amounts of fibre.

A Spanish news anchor has raised eyebrows after a semi-nude woman was spotted in the background during a home broadcast… particularly as the mystery figure in question was not his girlfriend.

Alfonso Merlos was presenting a news segment from his home, when viewers spotted a half naked woman walking past.

And it wasn’t just the partial nudity that got people talking because the woman pictured was not actually his girlfriend, former Big Brother Spain contestant Marta López, but a fellow journalist Alexia Rivas. 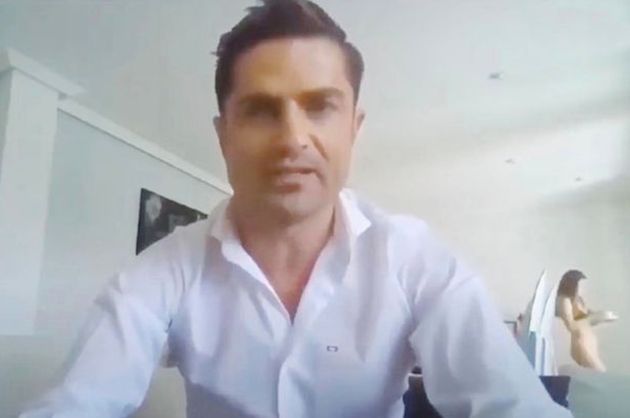 While Alfonso kept his head down on the matter for a few days, he later broke his silence during an appearance on The Ana Rose Show.

Apologising to Marta, he also insisted that they had split up at the time of the broadcast in question, stating: “If you think that my attitude has not been correct or that there are things that I have not done well, I have no problem asking for forgiveness, although my goal was not to harm someone else.”

Meanwhile, Alexia has insisted she knew nothing of Alfonso’s past relationship, claiming to Socialité: “He told me he was single. We have been [seeing each other] three weeks.”

What’s more, though, is the fact that Spain enforced strict lockdown rules last month, forbidding anyone from going outside for anything other than absolute essentials, meaning he and Alexia had potentially broken social distancing laws.

However, this isn’t the only from-home broadcast that’s caused a stir in the last few days.

On Monday, US broadcaster Will Reeve was caught without his trousers on during a live appearance on Good Morning America.