The future Mrs. Hangman? Glen Powell and Gigi Paris were a picture-perfect couple for years before stealing the show at Top Gun: Maverick‘s various premieres. “I’ve played a lot of womanizers and clueless assholes, so I’m hoping there’s not a whole lot of common DNA between the characters I’ve played and me,” Powell told Glamour […]

Erika Jayne is trying something new: outfit repeating. On the latest episode of the Real Housewives of Beverly Hills, which aired on Wednesday, May 25, the singer, 50, opened up about having to spend less money on her luxurious wardrobe amid her legal troubles with estranged husband Tom Girardi. While deciding what to pack for […]

Us Weekly has affiliate partnerships so we may receive compensation for some links to products and services. A lot has changed in the last two years. Kourtney Kardashian and Travis Barker fell in love and tied the knot. This Is Us ended after six emotional seasons. And sweatpants became the new slacks. Now that many […]

Euphoria actor Dominic Fike is facing severe backlash after making a series of controversial statements about how he has “visions” in which “hot” Amber Heard is “beating” him up. “Yo, so I’m just gonna come straight out and say it,” the musician, 26, said between songs while performing at Northwestern University on Saturday, May 21, […]

Most people would run in the opposite direction of a bear… but not little Juniper Martin.

Her mom Samantha discovered this to her horror this week when she caught her toddler chasing AFTER a bear that had appeared in their back yard.

The unintentionally hilarious and downright adorable video was shared to TikTok… and has already racked up 3.2million views.

The brief clip shows Juniper waddling out the back door of her Redmond, Washington home, as her mom nonchalantly tells her “Juniper, come back inside”… as she has no idea there’s a small black bear perched on her garden wall, just feet from her daughter.

The youngster, however, spots it — and squeals with delight. “That’s a bear!” she exclaims… before tearing down the garden after the animal.

The bear, startled by the bundle of cuteness barreling towards it, takes flight along the wall.

It’s only then does her mom realize what the little girl’s new little friend is, with an “oh shit!” — sprinting out into the garden, scooping her up in her arms, and hastily retreating back into the house.

“There’s a bear outside,” the mom tells someone inside the house, “and she ran right at it!”

“It started running across the fence and she chased it,” Martin told Fox13 of the close call.

“I just panicked. I didn’t really have a lot of thoughts in the moment so much as get the child and get back inside.”

She said the cub had been eating seeds from a bird feeder in the garden, which was now destroyed.

“It was just a little baby bear, but my biggest concern wasn’t necessarily the baby bear so much as I didn’t know where the mom was and didn’t know how she’d feel about two humans running towards her baby,” Martin added.

The mom said Juniper loves reading, and had recently been enjoying an animal identification book… and her favorite animal from it was, of course, a bear.

“I think she was just excited to see something from her book,” she said.

“I did tell her the bear was dangerous and we’ve been watching National Geographic.”

Wildlife experts advise removing food sources such as bird feeders from gardens during the spring, when bears are emerging from hibernation — and hungry.

“Stranger Things” has finally returned to our TV screens for its highly anticipated fourth season. After a three-year hiatus, we can’t wait to catch up with the cast – Millie Bobby Brown, Finn Wolfhard, Gaten Matarazzo, Noah Schnapp, and Caleb McLaughl… 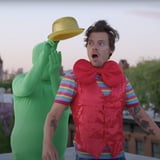 Harry Styles and James Corden just made music-video magic. With three hours to spare and $300 in their pocket, they shot a homemade video for “Daylight” from Styles’s new “Harry’s House” album. It was an ambitious project, but Styles assured the audience that he was not the one responsible for conceptualizing the challenge. “I can’t stress this enough, this was all James’s idea,” he jokingly told the cameras.

The most important detail of any great music video is the location, which Corden and Styles were clearly missing. As they wandered the streets of Brooklyn, NY, they asked to film in strangers’ apartments, meeting a few surprising rejections until a group of four young women finally allowed them to take over their space. The girls began to raid their rooms in search of suitable props and called up friends to be extras in the video. It’s hard to believe that “We’re filming a music video with Harry Styles” would ever be a hard sell, and the place was soon packed with people, glow sticks, hand-cut confetti, and whatever else Corden could scrounge up.

“I want this to be, just like, sexy as f*ck,” Corden told Styles as he made him sit in the apartment’s bathtub. Styles was a great sport the entire day, but he did have his doubts at times. “Should we just scrap it? Is it too late to just do a ‘Carpool Karaoke’?” he asked from the comfort of the girls’ bathroom. Corden had much more enthusiasm. “This is rock and roll, guys! This is rock. And. Roll,” he proudly said.

Thankfully, those three hours of hard work paid off. The final result is a euphoric mashup of everything you would imagine a 20-something’s life in New York City to be. Watch their music video for “Daylight” below to see how well Corden’s directorial debut turned out.

Holding out hope in Hawkins. Stranger Things characters Joyce Byers (Winona Ryder) and Jim Hopper (David Harbour) aren’t actually dating, but fans have long pleaded with writers to put them together. The duo’s onscreen chemistry has added an element of romance to the sci-fi show over the years, even as they have to fight off […]

Healthy coparenting! While reflecting on her life as a mom, Hilary Duff opened up about her approach to discussing ex-husband Mike Comrie with their 10-year-old son, Luca. “We talk about [him] often,” the actress, 34, told Grazia for the cover story, which was published Friday, May 27. “I like to tell him about how I […]

It’s official: Yara Shahidi is now a Harvard University graduate! The 22-year-old actor started her college journey in 2017 and earned her degree in Cambridge, MA, on May 26 after submitting a 136-page thesis paper. “It’s surreal to have finally hit t…

Long-lasting love on set! Michael Fassbender and Alicia Vikander are the perfect example of a costar couple still going strong. The pair met while filming The Light Between Oceans in 2014. While promoting the movie in 2016, they made it clear that their personal life didn’t affect their performances. “It wasn’t the first time in […]