A Queensland milk producer has vented its fury after the state government overlooked it and gave a major contract to foreign-owned companies.

Just over a week ago, 13-year-old Ryan Pourjam’s father, Mansour Pourjam, died in a plane crash after Iran’s military “unintentionally” shot down a Ukrainian jetliner, killing all 176 civilian passengers aboard.

Incredible new satellite imagery has captured the moment a huge plume of ash into the air from Taal volcano in the Philippines.

The ASX200 hit a fresh high of 7088.1 – the highest in history – as a momentous trade deal between the Us and China continues to deliver wealth.

An emergency evacuation order has been issued for parts of Victoria’s northeast with an out-of-control bushfire threatening the region.

Devastating images have captured the moment a singed koala appears to mourn the death of its companion after a wildfire decimated their Kangaroo Island habitat.

The island, off the coast of South Australia, is a biodiverse haven for wildlife. It’s sometimes described as the Galapagos of Australia. Fires destroyed as much as half of the rich habitat there when they tore through two weeks ago, leaving scores of dead animals in their wake.

In the image, taken Wednesday, the injured koala sits with its face buried in its chest near a deceased smaller koala. 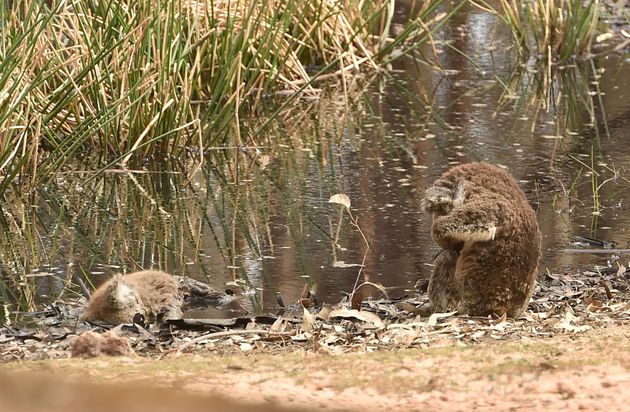 It has been estimated that more than half of the island’s 50,000 koalas ― the only chlamydia-free population in the country ― may have died in the blazes. Hundreds of thousands of other animals have perished, and endangered and critically endangered species native to the island, such as the glossy black cockatoo and Kangaroo Island dunnart, face real threats of extinction in their range. 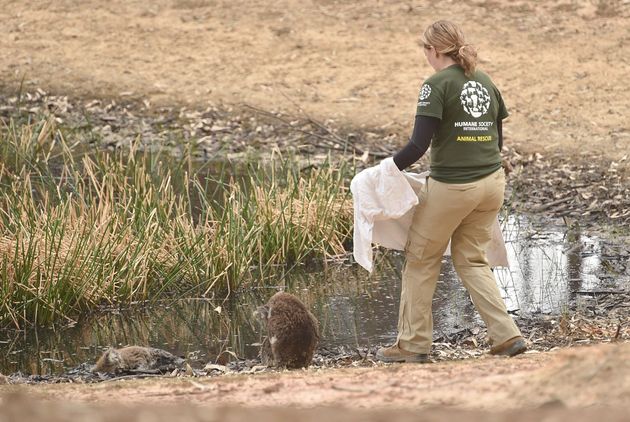 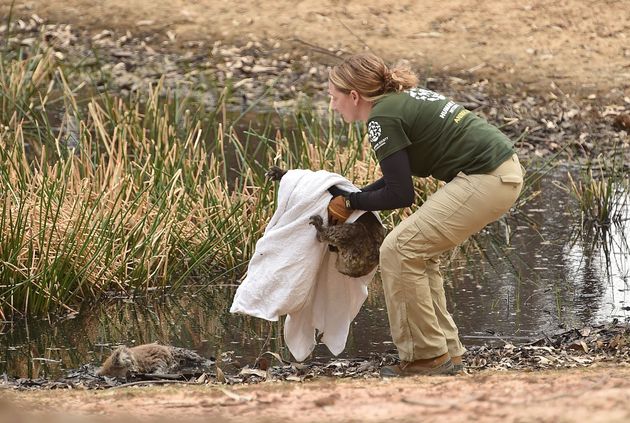 The rescuer pictured, global disaster response expert Kelly Donithan, told One Green Planet that these were some of the toughest scenes she’d witnessed as an animal rescuer, saying there were “bodies of charred animals as far as the eye can see.”

“But as we set out each day on search and rescue, we’re still finding animals alive, injured, dazed or traumatized, and it’s such a relief to be able to give them immediate lifesaving assistance.

“We’ve seen kangaroos with devastating burn injuries and dehydrated koalas gasping for water. Amidst all this death, every time we find an animal alive it feels like a miracle.” 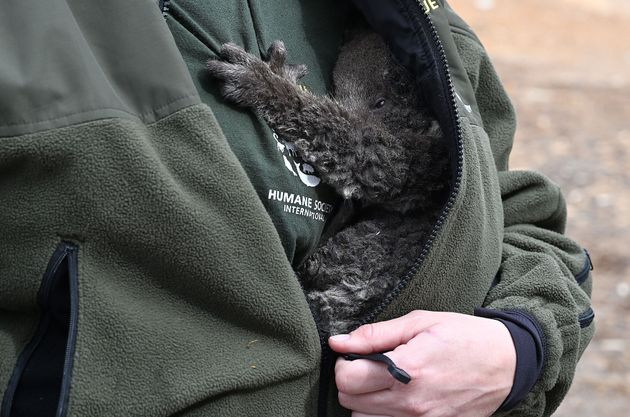 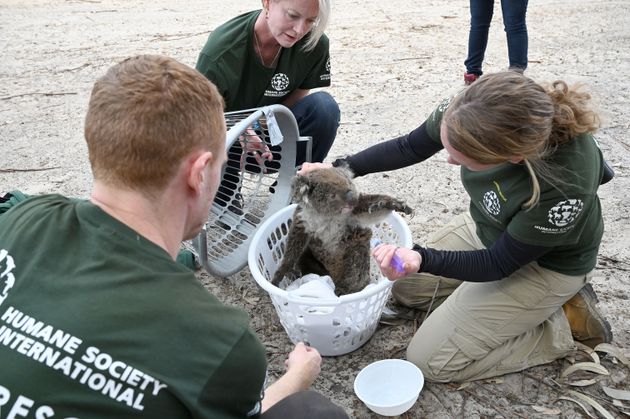 Australia’s federal government has pledged $50 million to a wildlife recovery fund, with $25 million going toward wildlife rescues, hospitals and conservation groups, and the other half set aside for an emergency intervention fund advised by a panel of experts.

This week, rain and cooler weather brought a reprieve for firefighters battling other blazes still burning across Australia, especially in the hardest-hit state of New South Wales. However, the NSW Rural Fire Service said, it wasn’t the end of the crisis.

“Although this rain won’t extinguish all fires, it will certainly go a long way towards containment,” it tweeted.

Nationwide, 29 people have died and more than 2,000 homes have been lost this fire season.

Australia’s catastrophic bushfires have has not only burnt over 10 million hectares of land, but they have also deepened the trauma Aboriginal people feel over the British colonisation of the country in 1788.

Yorta Yorta First Nations man Neil Morris said Indigenous Australians’ connection with the land is central to their spiritual and cultural identity, and seeing the fires destroy nature in front of their eyes is a reminder that that land was stolen from them 232 years ago.

“We are in a time where people are feeling lost in this country,” he told HuffPost Australia. “And it’s not everyone and it’s not the majority, but there are a lot of people who are feeling lost, and a large part of that is to do with the unjust ways that Australia was developed and has continued to be upheld.” 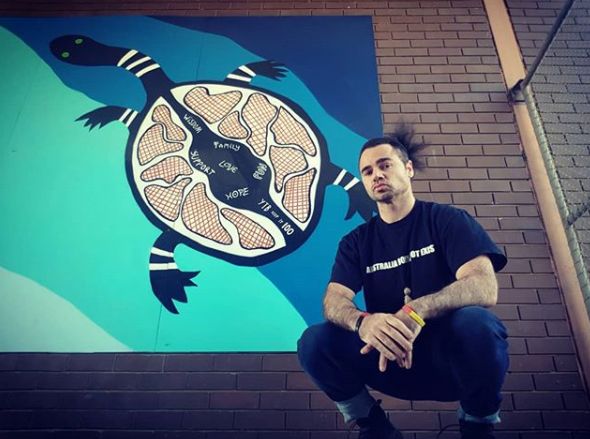 When the British colonised Australia, Indigenous people were victims of violence, forcibly removed from homes, separated from family and placed in missions and reserves. As a result, many were unable to continue cultural traditions and protect the land, a spiritual duty. The displacement continues to traumatise Aboriginal people, and today’s bushfires reinforce that.

“I don’t want to reduce anyone’s experience,” Morris said of Australians who have lost their homes or lives in the bushfires that began in September.

“What I do want to express is the fact that all Indigenous communities are living in trauma on a day-to-day basis at the hands of living in a colonialised society. Our people are already in a deep state of trauma. In many communities, we are in a state of recovery, and that’s a big process, obviously, with the severe disadvantage that our people have been at.” 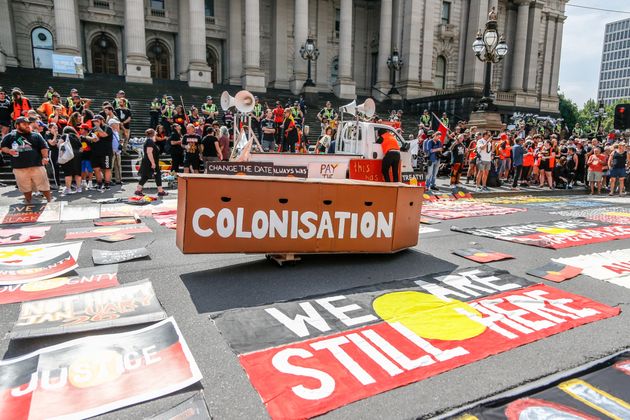 Indigenous fire practitioner Oliver Costello agreed. He said seeing “all our plants and animals decimated” as a result of the bushfires has been beyond devastating.

“They’re our ancestors; they’re our kin,” he explained. “Our cultural knowledge systems mean we’re a part of the land. We’ve been burnt. Our skin is the skin of the earth. We’re in trauma.”

Many Indigenous communities have fled their homes and been evacuated to refuge centres this bushfire season, and Morris said the displacement of communities and burnt land means “you cannot carry out your obligations as First Nations peoples”.

“We are a very spiritual people, and that’s something that’s important to the conversation,” he said.

“When you consider the fact that our custodianship is a real key element… taking that from us is very painful.” 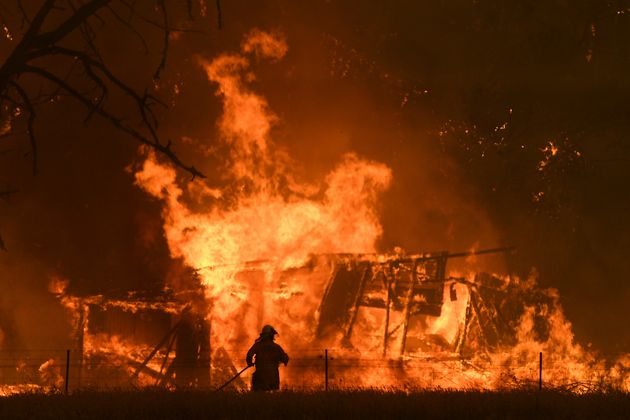 Aboriginal people losing their homes in the bushfires is also loss of land that belongs to its traditional custodians, he explained.

“When I found out that an Indigenous family had lost their home, which had been their home for multiple generations, for me that really hit home, because it wasn’t just someone who bought a house in a nice, pretty part of the world,” he said. “It’s custodians living on their country for a very long period of time, going back to however long people had been on that part of country.”

The money raised will be used to cover critical costs for Indigenous communities, including temporary relocation (hotel expenses, fuel, rent, medical needs), refurbishment of damaged property, resettling expenses, and replacement of vital items such as clothing and toiletries.

A US woman has been sentenced to 40 years in prison after pleading guilty to the murder of her former high school teacher.

Two people are in hospital under police guard following an explosion at a suspected clandestine drug lab in Adelaide’s south-west. 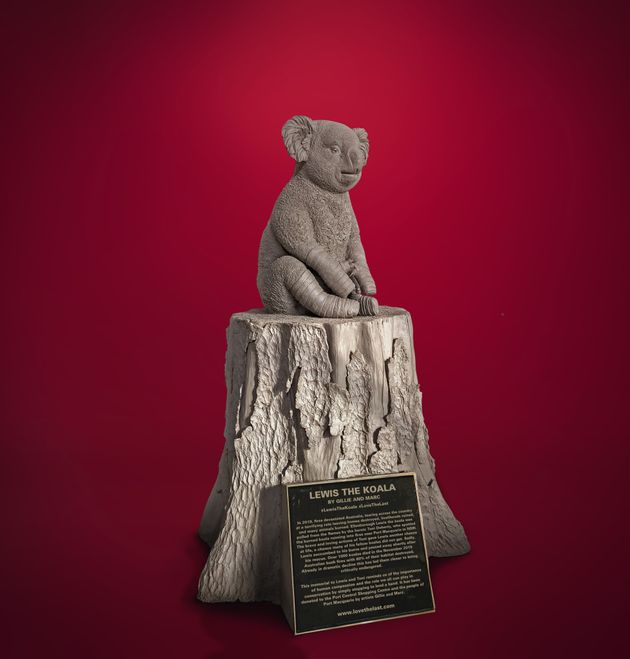 Artists Gillie and Marc Schattner have expressed their “shock and disbelief” after Australia’s Parliament rejected their donation of a bronze sculpture memorial of Lewis the Koala.

Lewis was the terribly scorched koala that went viral after Toni Doherty, a grandmother in New South Wales, was filmed entering a bushfire in and around the town of Ellenborough to save him with the shirt off her own back.  Lewis died from his burns, one of an estimated 1 billion or more animals in the worst bushfire crisis in Australian history.

The artists, who are married, said the sculpture was meant to be a gift to the government in order to “showcase what happened during this devastating time in Australia.”

Gillie and Marc explained on their official Facebook page that their gesture was rejected with a “cold email” saying, “We decline as it does not meet our policy.”

After public backlash and overwhelming support online, Gillie and Marc said they have reached out to several ministers in Canberra to negotiate a solution, and they are hoping for a positive outcome.

“We are now waiting for a response but in our hearts we know public opinion is on the side of Lewis and Parliament House must recognise this,” Gillie and Marc wrote on Facebook.

Parliament House told HuffPost, while greatly appreciating the gesture from the artists, the Department of Parliamentary Services (DPS) did initially decline the offer and explained the appropriate processes for accepting artwork into APH.

“DPS would be very pleased to consider an application from Mr and Ms Schattner for the work to be exhibited within Parliament House in line with the conditions of the Parliament’s Temporary Exhibition Policy,” DPS said on Friday.

“However, once the immediate bushfire emergency is over, DPS will work with the Parliament to consider an appropriate way to ensure fairness for all artists wishing to display artwork in APH which recognises the bushfire tragedy.’ 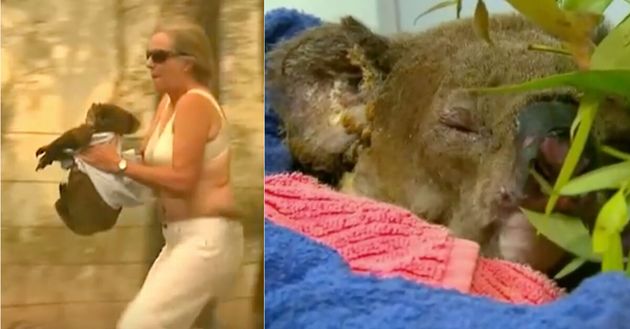 “We didn’t for a second think that it would be an issue, we thought that they’d be honoured to have it there,” Gillie told HuffPost Australia. “We are devastated given everything Australia has been through.”

The renowned sculpture artists made four memorials that cost tens of thousands of dollars, and three have found locations ― one will go to Port Macquarie Koala Hospital (the facility that cared for Lewis), one to London and one to New York City.

“We wanted to find four incredible locations to showcase what happened during this devastating time in Australia,” the pair said.

Gillie and Marc asked the public in a Facebook post where they thought would be the best locations for the statues. 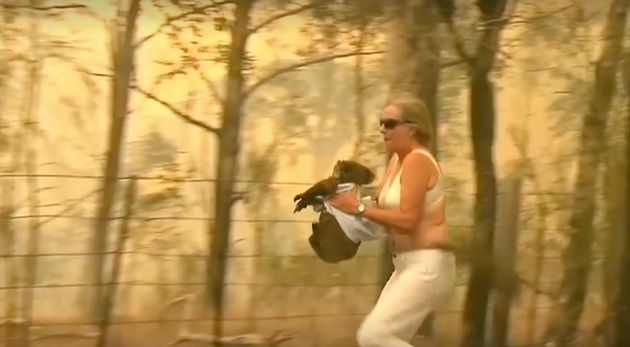 “More than 70% of the suggestions was Canberra, outside Parliament House,” Gillie said. “All we wanted was for somewhere people could see it and pay their respects.”

She added, “People of Australia want a memory of what happened. And for the government to acknowledge that this is something incredibly tragic that’s affected the core of our country.”

Gillie and Marc started work on the sculptures after hearing about Lewis’ ordeal and treatment but said they became more passionate when they heard Lewis had passed away from his injuries in November.

This report has been updated to include an official statement from the Department of Parliamentary Services (DPS).

Volunteer firie Samuel McPaul, who died in a freak “fire tornado” on the NSW-Victoria border, has been remembered as a kind and hard-working family man.

A number of homes have been flooded after a water main burst on a south-east Melbourne street.