Sitting behind an easel, Malcolm Sturrock paints careful brushstrokes on a canvas while peering at a photograph of Federal Treasurer Josh Frydenberg.

It's a calm and unlikely scene amid the coronavirus maelstrom enveloping Melbourne's aged care homes. So far around 900 staff and residents have been infected during the state's second wave of the global pandemic.

Malcolm is at Estia House in Heidelberg West, where at last count 67 cases of COVID-19 have been recorded. The 75-year-old is one of them, though thankfully, his family and friends say his case is mild. 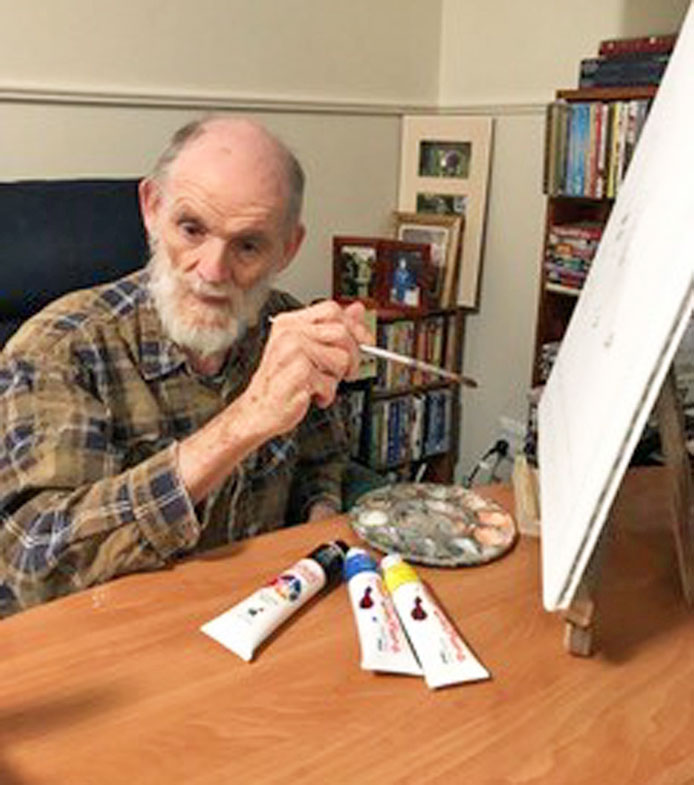 What the virus has meant, however, is Malcolm has been confined to his room for the past fortnight.

"It's really been terrible for Malcolm who is normally so active. He hasn't been able to leave his room and has become quite anxious and depressed," Camillo De Luca, a Melbourne artist and gallery owner, said of his friend.

Casting about for ways to help keep Malcolm occupied, Mr De Luca hit upon the idea of sending him a blank canvas.

The plan is for them to enter the prestigious Archibald Prize this year.

"We are going to try to win the Archibald. I contacted the treasurer, Josh Frydenberg and he was very obliging and very happy to be a virtual sitter for Malcolm. That was wonderful of him," Mr De Luca said.

In 2016, the artist was named a finalist in the Archibald Prize for his own portrait of Mr Frydenberg.

"I dropped off a canvas to Malcolm and some photos and now he has something to think about and do while he's so isolated there," Mr De Luca said.

He hasn't been able to visit with Malcolm since March, but the pair speak on the phone or Zoom most days, trading jokes and making up silly songs to keep themselves occupied.

It's a well-worn pattern in an unusual friendship that has lasted more than a decade.

The pair met in 2009 when Mr De Luca was volunteering at Arts Project Australia, a gallery studio which supports artists with intellectual disabilities.

Malcolm, who was born with an intellectual disability, is a keen painter and attended the studio three days a week, right up until lockdown in March.

"There is a saying there at Arts Project Australia that if you hang around long enough then you will find your soul mate and that's what happened to us," Mr De Luca said.

"I became a very close friend with Malcolm – we just sort of hit it off.

"He's got this incredible strength and imagination. He is a very positive person but he is also very funny and clever.

"Sometimes with a couple of words he will just say something that is so incredibly smart, he'll just nail it." 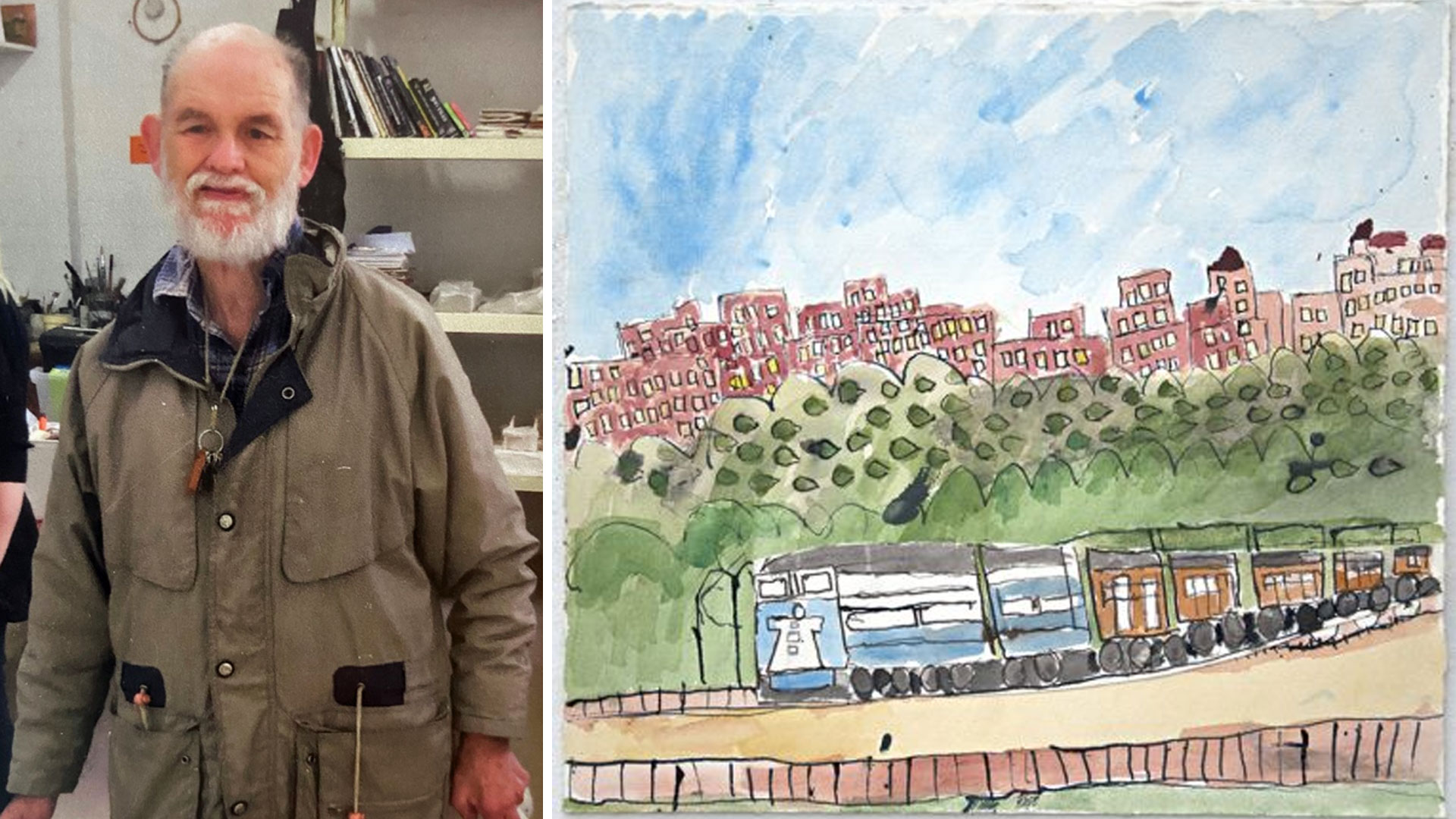 A popular figure in the local community, Malcolm used to attend the local Men's Shed weekly. He also volunteered every Sunday for the last 30 years at the Diamond Valley Miniature Railway.

Right up until the pandemic struck, Mr De Luca and his partner Grace were able to continue a decade-long tradition of having Malcolm over to their house for dinner once a week.

"I could still get him out of there once a week. We would have a meal and sing to Elvis, Johnny Cash and Beatles songs with the radio on full blast," Mr De Luca said.

"He always cries when I play Dean Martin's 'That's Amore or 'I Am Australian' by The Seekers – every time – and I tease him."

Mr De Luca said he had gained just as much from the friendship as Malcolm had.

"My grandparents were in Italy and I sort of missed out on having an older person in my life," he said.

"And also, I think he's helped me just slow down and put things in perspective.

"Making money and working, and all these day-to-day things, can be consuming and then you realise that sometimes you've just got to stop and have a joke, he's helped me do that." 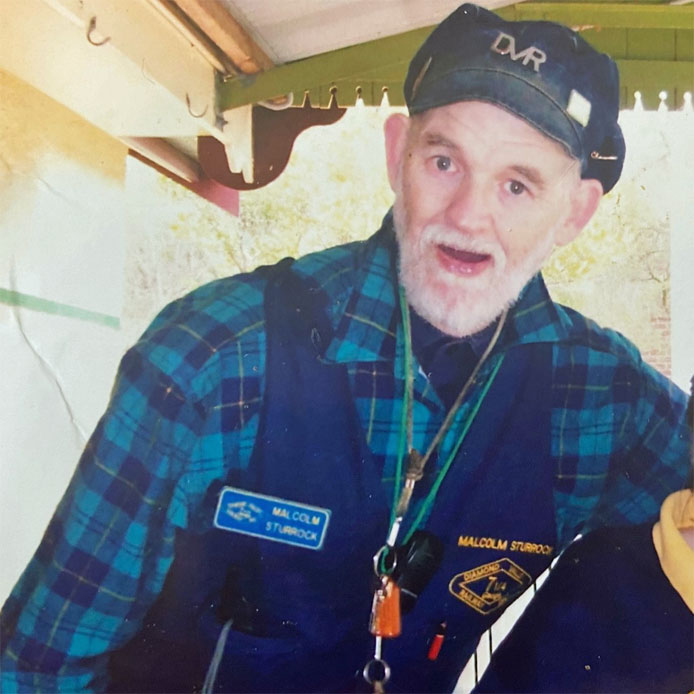 Malcolm's niece Jessica Sturrock said her uncle and Mr De Luca had "an incredible friendship" that "lifted people up" when they witnessed it.

"Malcolm has battled more things in life that is humanly possible by most standards ... Camillo has been there for him, always," she said.

Mr De Luca said he hoped Malcolm's story would help put a spotlight on what the elderly in nursing homes were going through during lockdown.

"The people who work in these homes are wonderful people, it's nothing to do with them, but this has turned into a bit of a nightmare for so many because they can't see their loved ones, they can't exercise and the staff they know are all being moved out," he said.

"I know the intention is to protect them but the outcome in some ways has been the opposite. There needs to be a smarter way to do this."

Speaking to 9news.com.au from his room in isolation, Malcolm said he was missing his friends and family "like heck". But, for now, he has an Archibald Prize deadline to meet.