He’s been depicted as a saint, a superhero, a king and more. What do these portrayals say about how we think about gender and ethnicity, and is there any danger in all this?Ashley Bloomfield, the ever-polite director general of health, has become the recognisable face of our national Covid-19 response. Helped by the 1pm updates […]

He’s been depicted as a saint, a superhero, a king and more. What do these portrayals say about how we think about gender and ethnicity, and is there any danger in all this?

Ashley Bloomfield, the ever-polite director general of health, has become the recognisable face of our national Covid-19 response. Helped by the 1pm updates that he’s fronted almost daily during outbreaks alongside Jacinda Ardern, he’s been cast into the strange and unprecedented position of being a public servant with a cult-like following across the country.

Aotearoa was obsessed, which inspired the pair, who both have backgrounds in socio-linguistics, to look at how Ashley Bloomfield was being shaped in the public imagination through these commercial and artistic products. Through their research, the two academics identified six key ways that Bloomfield was being portrayed: superhero, love interest and sex symbol, national treasure, saviour, saint, and authority figure.

Dawson says the urge to purchase Bloomfield products speaks to “a desire for solidarity”. Buying a $35 hand towel with Ashley’s beaming face surrounded by embroidered love hearts, for example, was a way of signalling one’s belonging to, and solidarity with, the team of five million.

While people likely bought or made these products simply because of their affection for Bloomfield, the products themselves also reinforce other more complex ideas, particularly around norms of gender and ethnicity. More specifically, the pair’s recently published analysis found that “when New Zealanders fear for their lives, they don’t just turn to a specific type of person (a middle-aged, middle-class, Pākehā man), they also turn to a familiar set of dominant discourses (of gender, sexuality, nation, class and ethnicity)”. When it comes to our understanding of real life, there’s a power in symbols, explains Dawson. “It’s part of how we construct our social life,” she says. By looking deeper at the symbolism within these representations of Ashley Bloomfield, there’s a whole lot more meaning to be found.

One observation of note is that Bloomfield has been repeatedly portrayed as an individual hero, even if it’s often been tongue-in-cheek, which is significant because the very idea of a hero has been gendered over time. “We are still working within a structure that values strength and brute force and the idea of an ‘exceptional individual’ rather than vulnerability and the collective,” says Shelley.

Popular culture, from old superhero films to the Marvel heroes of today, has essentially given us a common understanding around our desire for someone to save us. The idea of a hero reinforces certain forms of masculinity.

“Covid-19, in this case, is the villain,” says Dawson. “And there was this very big use of the metaphor of war throughout the Covid-19 reporting in different countries.” She says the idea of a hero makes sense when it feeds into the fight against a “dastardly villain” like Covid-19.

These ideas of competition, of winning and of power, have all been gendered as masculine traits due to centuries of patriarchal dominance, she says. “Whether we know this consciously or not, it’s still being perpetuated, in often hidden ways.”

During times of crisis, people tend to look to one person as a saviour. Throughout history, that person has tended to be a man. And although Bloomfield himself seemed to actively recoil from these portrayals of himself as a hero, the fact that it happened anyway “speaks to the fact that people love a hero, because the frame of a hero has been so ingrained over time”, says Dawson.

Dawson notes that beyond gender, ethnicity was a crucial part of these representations too. It’s impossible to look at gender alone, it’s always attached to race and ethnicity, social class, able-bodiedness and so on. “It’s when you look at those connections, you can see the privilege that’s been compounded or emphasised in the products.”

It’s highlighted in the portrayal of Bloomfield as an Americanised superhero, European-styled saint or, perhaps most uncomfortably, a colonial hero with a crown.

For non-Pākehā in New Zealand, these are features that will more likely be noticed and seem questionable. Particularly the idea of a king saving us. “It’s very awkward, I would say, for the New Zealand context,” Dawson says. 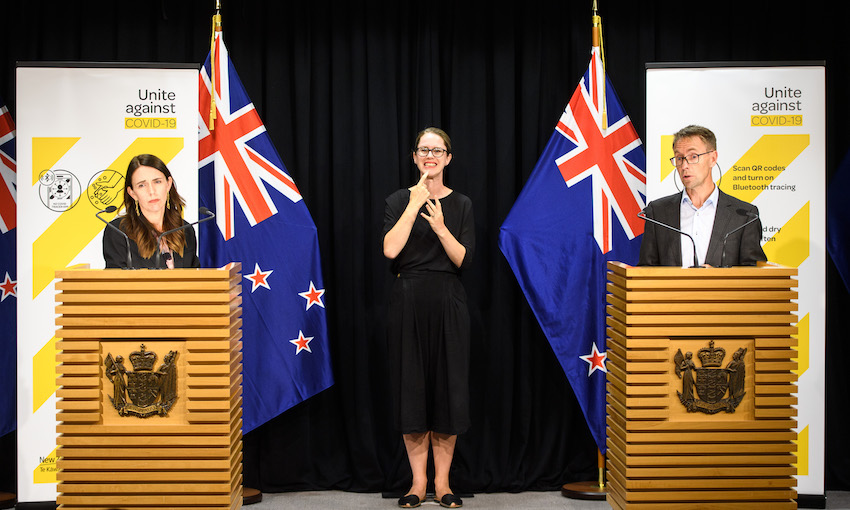 Since the beginning of the pandemic there has been a notable lack of diversity in the government’s front-facing response team, something that has been repeatedly criticised.

While we had a female “hero” in Jacinda Ardern, reinforcing the fact that women can be heroes too, there were certainly no ongoing Māori heroes put forward by the official response, or even within the media. Many Māori have been left wondering, where is our Moko Toa? Where’s our Māui?

“We can destabilise the idea of a hero in and of itself,” Dawon says, “but at the same time that idea of a hero is not going anywhere very quickly.” That means, in the meantime, there needs to be more representation of different kinds of heroes. It’s important as we expand the meaning of the hero into “new and more inclusive terrain”.

“That idea of representation and seeing yourself mirrored has been shown time and time again to be super important for a sense of wellbeing and belonging,” she says.

The lack of Māori representation has surely been symbolic of the exclusion of Māori within our Covid-19 response, and has potentially added to communication failures that have compounded the crisis for Māori, who are now overrepresented in case numbers and underrepresented in vaccine numbers.

There are of course problems with casting one person, especially a public servant, as an individual hero, especially in a complex global pandemic. And that’s become clear within this latest outbreak, with the much trickier delta variant, says Dawson.

“When you build somebody up to such an extent, especially in the New Zealand ‘tall poppy’ context, there’s a danger that they are going to be knocked off the pedestal, which is probably happening in certain areas at the moment.” There are no more love songs, the fan art has dwindled, and there are certainly no new pairs of Bloomfield earrings for sale this time around.

READ:  The Right to Resist
Shares
Share This
Finance Advice 2021