Last year Wellington-born writer Alice Miller released More Miracle Than Bird, a novel about Yeats’ wife Georgie Hyde-Lees. ‘Vivid and convincing,’ wrote Vincent O’Sullivan for Landfall. ‘A work that held me by the bravura of its ambition.’She writes from Berlin. As New Zealand jolts back into lockdown, I’ve been thinking about the places we live in, […]

Last year Wellington-born writer Alice Miller released More Miracle Than Bird, a novel about Yeats’ wife Georgie Hyde-Lees. ‘Vivid and convincing,’ wrote Vincent O’Sullivan for Landfall. ‘A work that held me by the bravura of its ambition.’

She writes from Berlin.

As New Zealand jolts back into lockdown, I’ve been thinking about the places we live in, pass through, and get stuck in. Lately, when I wake up in the night in my apartment in Berlin, I coax myself back to sleep by walking around small stony familiar bays, around the uneven curve of Māhina Bay with that same boat dragged up on the stones watching me with its enormous painted eye; along the shallow lip of Sunshine Bay past where a goat used to be tied up in a field; and along into Days Bay where late one night I had to stop my car to let a stooped little blue penguin wander in front of my headlights before it disappeared down into the rocks. Nearly 20,000 kilometres away from Te-Whanganui-a-Tara, these places seem closer than ever.

Here in Berlin I amble around the supermarket in the new way we walk now: leaving people an exaggerated amount of room, glancing anxiously at eyes above silver and white masks, and uselessly holding my breath as someone brushes past me as they laugh into their phone, breath splashing recklessly out into the air.

Back outside, walking is a kind of lure, the rhythm soothing me into another state. Imaginary walking draws me into sleep; real walking helps me to get used to the virus as a cohabitant in our neighbourhood, or to learn the outlines of a new place, that luxury space of being halfway between lost and found. It also helped me to imagine what it was like to be an entirely different person, Georgie Hyde-Lees, a woman who was born at the end of the 19th century, believed in ghosts, and eventually married the Irish poet WB Yeats. She became the main character of my first novel. (Side note: This book was not written miraculously á la Shakespeare-penning-King-Lear-in-quarantine, but was finished well before our own special version of the pestilence). 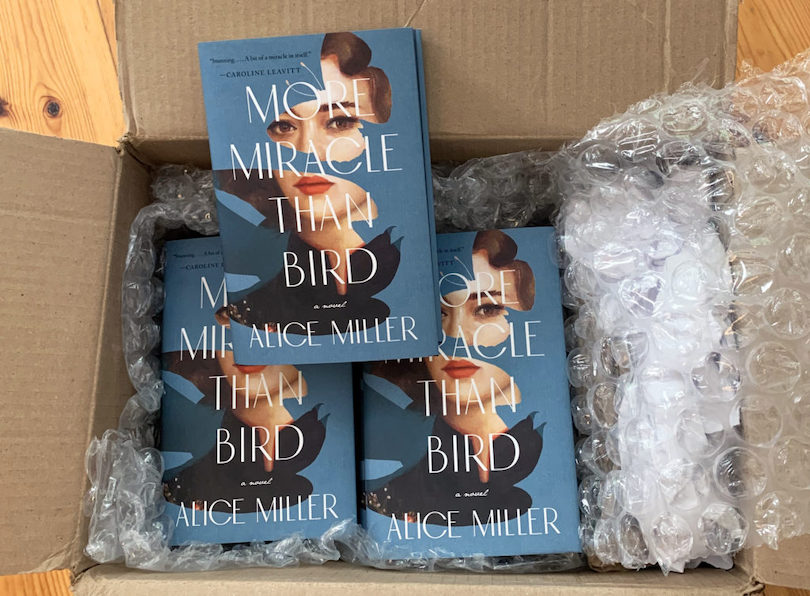 In London during World War I, this woman, Georgie, walked at night through the blackouts, across straw that was laid out to mute the clatter of horses’ hooves, knowing a German zeppelin might drop a bomb at any moment. Now that we have a global catastrophe of our own, I think of her, as we relearn our new context and ourselves within it, as fear and normal life nestle in closer to us than before.

When the zeppelin raids over London began, they were not – as we might imagine now – entirely a thing of horror. Many people were fascinated, thrilled to catch sight of one of these bulbous ships of the sky. Yeats reported in a letter that he caught a cold staying up past 2am trying to catch sight of one. The horror came a bit later, mixed with weariness; a letter from 1917 says, “I liked my first raid but dislike them extremely now.”

In our own catastrophe, people continue to be excited and kind and anxious and funny and sweet and reckless as they were before. As we fall in and out of lockdowns, the pandemic has made many of us far more aware of mortality, fragility, of the general lack of answers – all helped by a rapidly worsening climate crisis. No longer cushioned by our usual structures – stable routines, offices, jobs, schools – more of us are realising how our uncertainty used to seep into those structures and largely disappear; now, uncertainty leaks out everywhere.

I find walking helps. Imagined landscapes, remembered landscapes, the real ones surrounding us. Catastrophes make it harder for us to believe in progress – in our central myth that most things tend towards improvement – but walking is its own kind of modest progress, that needn’t ask for anything more. As autumn arrived in Berlin, and I had to rush to avoid the heavy chestnuts shooting down from the trees, the homesickness began, an actual thirst for the rough ocean out past Owhiro Bay, a constriction of the throat which confuses me – as if I’m wanting to take gulps of the sea. It’s not a bad feeling, but a kind of doubleness, allowing me to walk through Berlin while thinking of Wellington’s South Coast, merging together a blurred version of two different worlds.

The tiniest matters become high luxury. At first, just glimpsing an urban crow silently examining its reflection in a shop window, or the new graffiti in our local community garden (FMNST PWR). Then, after nine months, we were allowed to go out to dinner outside at a restaurant. Suddenly, we were allowed to meet with more than one person at once. The other night we were able to – dear God! – go to an exhibition opening, with real people, and prosecco, and actual art. The next day we had a picnic in one of Berlin’s scruffy parks, while our friends’ kids adorably pretended to kill each other with sticks. Who could have imagined such a diverse range of experiences! And still, this feels temporary, as if this exotic lifestyle can’t last. One of the reasons I was drawn to Georgie Hyde-Lees is that she struck me as very brave in a crisis. She was also unusual in that she was determined to speak to the dead; she believed it was possible and she was going to bloody well work out how. I liked her certainty. While believing in ghosts might sound ludicrous to us, I found it only as improbable as a religious person’s certainty in the rightness of their particular religion, or Richard Dawkins’ certainty that there can’t possibly be a God. There are many kinds of certainty I can’t grasp, but I envy anyone who is at peace on the question of the dead, as I am not. That lack of peace seems part of the reason I’ve taken to walking in my mind at night from all the way down by the Pencarrow lighthouse, past the gorse and sheep on the rough dirt road, which seems to take forever to reach its end.

Speaking to the dead is what the historical novelist does; she is a medium, transmitting the message from the dead to the reader. To try and channel that voice, it helps to walk the ways that person walked. Back when we could travel, I spent a long time walking and wondering what it could possibly be like to be this young woman in wartime London; after her, I wandered from the makeshift hospital she worked in Berkeley Square Gardens in Mayfair, along the edge of Hyde Park, and over to Bloomsbury where Yeats’ small flat was at Woburn Buildings.

Another lovely part of this walking research is that unlike the whole process of writing, which is an exceedingly solitary activity, you can do it with company. So I conned my friend Jeff, who happened to be visiting London, to walk for more than an hour until we reached a large, unexciting looking house in North Kensington, which we stood outside on the pavement, while I explained that in 1916 it was the headquarters of the magical Order of the Golden Dawn, where Georgie had met up with Yeats and they had performed secret sacred rituals involving Tarot cards and daggers and bells and coffins. 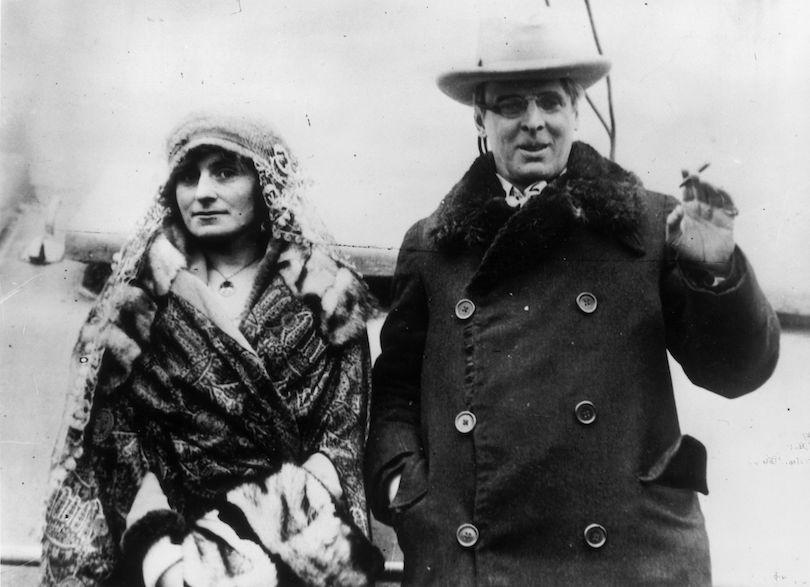 When my sister and her partner came to the UK, thwarted by their usual plan to lure me on a daring, multi-day kayaking trip with infinite mosquitoes because they had brought their three-month-old baby, I convinced them to come on a long drive to West Sussex and the South Downs, where we stopped outside the house Georgie spent her summers. We also visited the pub and nearby Stone Cottage where Ezra Pound and WB Yeats spent their winters writing poems, while Ezra’s wife Dorothy Pound worked on her painting. Three winters spent writing poems and painting might sound idyllic, until you wonder what it was really like to spend a season with Ezra Pound, who Gertrude Stein described as: “a village explainer. Excellent if you were a village, but if you were not, not.”

Finally, I travelled around Ireland where Georgie spent the later years of her life, wandering through Dublin and Galway, and on to Sligo and the grave of Georgie and Yeats (which holds her bones, but due to a mishap of the war, probably not his), stumbling upon unlikely gems such as a Sligo sign urging you to pick up litter “for Yeats’ sake” and the Yeats United FC, the poet’s very own football team, which I was disappointed to discover is actually made up of an enormous number of small children, and not, as I imagined, 11 rickety literature professors, kicking and furiously yelling, Tread softly! You tread on my dreams!

Anyway. All those far-flung journeys are on pause for the moment. For now, the ability to walk small circles around different real and imagined neighbourhoods is a privilege. The other day my husband and I walked to the old street corner in Berlin where my family ran an account book store before the second world war. My family were Jewish, and although my Gentile grandfather briefly took over the shop, the business was liquidated in 1932. It was located one block away from Bebelplatz, where the Nazis would burn around 20,000 books only a year later. My grandmother, who was 17 in 1933, had already fled Germany. Eventually, she would end up in Palmerston North.

The French writer Michel de Certeau said that to walk is to lack a place. How extraordinary to be able to remember all these places we’ve grown up in or visited or dreamed of, and to read novels or biographies or letters that locate us not only in utterly different locales, but into real, grasping minds belonging to other people. The determination to walk, like the determination to wrench forth the voices of the dead, gives us more stories. And more stories, no matter how dark they are, somehow, give us hope.

More Miracle Than Bird, by Alice Miller (Tin House Books), is available as an ebook now for $37.40. As soon as we’re out of level four you can also buy a hardback from Unity Books Auckland and Wellington.

READ:  ‘Could get totally out of control’: DHB modelling paints worrying picture for South Auckland