Claiming a world first, homegrown skincare brand Emma Lewisham is making the beauty industry more sustainable, one luxurious face wash refill at a time.Emma Lewisham was “gobsmacked” when famed environmentalist Dr Jane Goodall agreed to endorse her fledgling namesake luxury beauty brand.“I have looked up to Jane for years since I was a teenager. She’s […]

“I have looked up to Jane for years since I was a teenager. She’s been an icon, so formative, so I essentially wrote to her thinking nothing of it,” Lewisham says. “Just writing what we had been doing and working on and believed the future of beauty needed to be, and she responded.”

Claiming to be the world’s first carbon positive beauty brand, Emma Lewisham has manufactured skincare products that remove more carbon dioxide than they emit and established a programme called the ‘Beauty Circle’ for customers to return their empties for sterilised, insertable “pods” refilled with fresh product.

Goodall, considered the world’s foremost expert on chimpanzees and a UN messenger of peace, believes apathy is the greatest threat to our future and hopes the beauty industry can follow Emma Lewisham’s lead, saying, “I believe they are paving the way for the future.”

The scientist’s mark of approval comes as Lewisham’s skincare brand on Wednesday shares its blueprints with competitors large and small to accelerate the beauty industry’s shift toward a cleaner, more circular operating model. 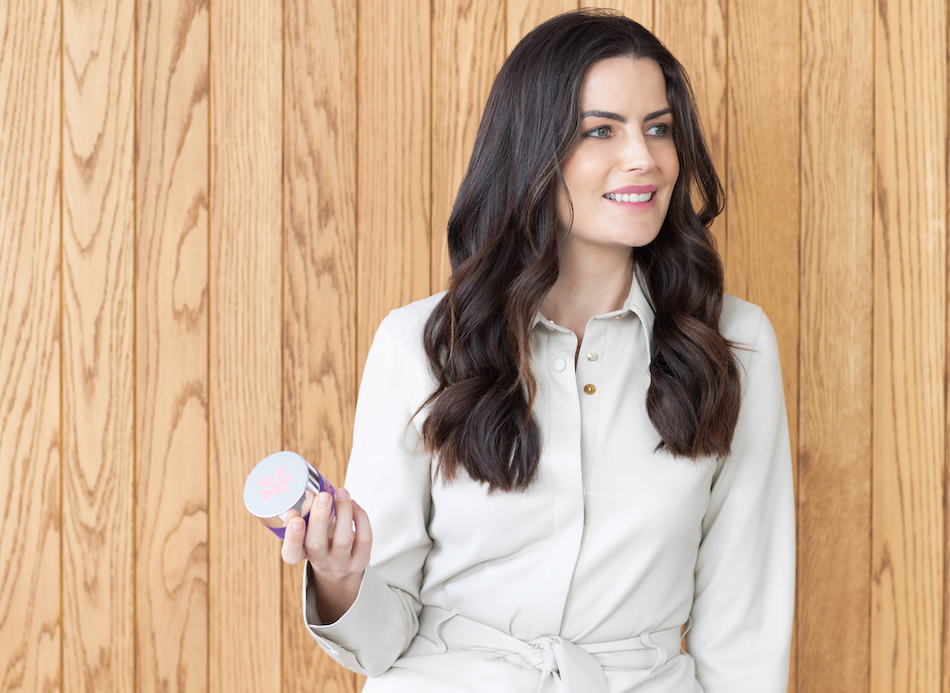 What is a circular economy?

Think of it as an alternative to the more linear “take, make, waste” model. Resources are kept in use for as long as possible, their maximum value is extracted across their various lifetimes, and waste is recovered or regenerated – and so the loop continues.

Lewisham acknowledges a circular business model is audacious, but says she’s benefited from the ability to build sustainability into the business from the start. “We’ve been able to set up a business which is right for the 21st century, and should operate as businesses in the 21st century should, from the get-go,” she says. “It’s enabled us to be a lot more nimble and we don’t have all the baggage associated with these really historic businesses.”

A glance at some of the world’s biggest cosmetic giants reveals deadlines on their sustainability goals are looming. L’Oréal, the French conglomerate behind well-known skincare brands Garnier, Kiehl’s and L’Oréal Paris, is aiming for all plastic packaging to be refillable, reusable, recyclable or compostable by 2025. American mega company Proctor and Gamble, home to Olay and SK-II, among others, aims to achieve 100% recyclable or reusable packaging worldwide by 2030. Estée Lauder, which owns a stable of brands including La Mer, Clinique and MAC, says it plans to make 75%-100% of its packaging recyclable, refillable, reusable, recycled or recoverable by 2025.

But Emma Lewisham is ahead of the pack. The company has achieved circularity already, having worked for over a year with independent carbon and environmental management agency Toitū Envirocare to certify its products as “climate positive”.

The company measured emissions across its entire supply chain and came up with a plan to reduce them by 74%. The brand’s ‘Beauty Circle’ – the system by which its containers are refilled with “pods” of new product – is a key part of that plan. As well as reducing the number of outer containers used, Beauty Circle encourages customers to return the inner pods free of charge for recycling in partnership with global waste management social enterprise TerraCycle.

Meanwhile, a warehouse is being set up in Sydney to handle Australian orders that would otherwise have come via air freight from New Zealand. The brand offset its remaining emissions to reach net zero, then offsets an additional 25% to achieve climate positive certification.

Given its refillable packaging had to be designed and manufactured from scratch, it cost close to US$40,000 in upfront investment just to create the product moulds, Lewisham says. Offering customers free shipping to return used pods is another expense, along with the usual ongoing costs of operating a business.

Asked how the costs of a circular business stack up against the traditional take, make, waste model, Lewisham says the brand has proved a business can operate sustainably and still be commercially viable. In July, the company – whose products retail for between $77 and $148 – said its year-on-year growth for 2020/21 was 20 times revenue in New Zealand and 95 times revenue in Australia. Double-digit growth has been forecast for the coming 2021/22 year.

Sustainability consultancy Go Well Consulting has been working with Emma Lewisham for almost a year, though director Nick Morrison says the skincare brand had already made inroads before his team jumped on board to help with strategy.

He says it is too early to tell how cost-competitive circularity is compared with the more traditional business model. “We won’t really know truly how successful [Emma Lewisham’s Beauty Circle system] is for another probably two years, maybe until we’ve had enough of these products and the packaging go out and seen how much has actually come back and then seen how many times a single pod goes around,” Morrison says. “Is it only going to get sterilised once then reused one more time or is it going to be reused 100 more times? These are the kind of things we just don’t really know yet because no one’s really doing it and that has a massive difference on the cost-comparison there.”

Circular businesses have their own unique rewards, though, including a different kind of customer loyalty. Morrison points to circular business models such as renting products as a service – for instance, worn-out carpet in need of replacing is returned to manufacturers, who retain the materials by recycling the product and giving them second lives. “The relationship with customers is entirely different, right? Rather than just buy a carpet and then disappear, it’s an ongoing relationship,” he says.

The environmental cost and the price of carbon are other factors businesses must take into account, Morrison says. “When you start putting all that together, the business case in terms of the cost really does stack up. But the hard part is the capital cost often required at the start, which can be pretty prohibitive to smaller businesses that want to do things differently.”

He says Go Well Consulting lays down a “pretty simple and pretty obvious” truth for businesses wanting to create jobs, turn a profit and regenerate the planet: circularity is their north star. Lewisham, he says, has taken that maxim and run with it. “We just desperately need more businesses like that to shake things up because it’s just been so much talk for so long.

“You just see so much just tinkering around the edges with a lot of the bigger businesses,” he says, “whereas [with Emma Lewisham] here’s a group of people that have come in and they’re just really shaking it up and doing things differently and really pushing for a better way.” Emma Lewisham’s products are certified as carbon positive – a world-first for any beauty brand, the company claims. (Photo: Supplied)

What are the rewards?

Auckland could be $8.8 billion better off in 2030 if its economy becomes circular, according to a 2018 study led by the Sustainable Business Network (SBN). But New Zealand businesses are making sluggish progress, meaning the sizeable economic and environmental benefits are being lost.

The organisation’s latest “state of the nation” report, Going Full Circle, has highlighted some signs of improvement but the pace of change does not match the urgency of the climate crisis. James Griffin, SBN’s projects and advisory general manager and the report’s lead author, says businesses’ thinking on circularity is “not very advanced”.

“There’s a lack of understanding of the transformational nature that the circular economy offers because it’s looking at, effectively, a different, whole economic system to the one that has been in play for the last 70 years.”

Some tasks are well within their reach but transformational change requires upfront capital. Griffin says it is trickier to implement a long-term view by making changes now to thrive in the future when a company’s core business is entrenched in the current take, make, waste model.

Griffin cites Swedish-founded furniture giant Ikea, which aims to be wholly circular by 2030 and is encouraging customers to give their wares a second life through repair, reuse, passing on or recycling. But if businesses do not have huge resources at their fingertips, he says “focus and determination and bravery” will be necessary instead. But he warns businesses not to think too narrowly about waste. Rather than focusing solely on recycling, they should question why their waste even exists or how else it can be repurposed and reused.

“There are multiple different ways to engage with the circular economy and some are more relevant than others, and it depends on the category and sector,” Griffin says. “But we’ve got to move beyond basic waste diversion and recycling to higher value opportunities.”

Transparency may help to combat the slowness of change, according to Morrison. Perfection will not be achieved overnight but sharing work widely, answering questions honestly, being open to accountability – that has got to be the way to do it.

“This is hard, this is really hard. It’s so obvious in terms of going from linear to circular and regenerating and all that stuff,” he says. “It’s pretty hard to argue with that but how we actually do that is so hard and how we shift and how we bring people along on the journey is really, really challenging.”

In her statement of support of Emma Lewisham, Dr Jane Goodall says she believes a new benchmark is being set for how all industries should be operating: “circular, waste-free and carbon positive”. Lewisham says her environmental idol’s endorsement is the ultimate accolade – especially since Goodall is not someone who would champion another’s work unless she thought it was robust.

“We’re very proud. I think it really validated the work that we’re doing as a company, as being the pinnacle of what all beauty brands should be doing.”