A new biography of the prime minister was written by two authors trying hard to tell the story of a country without visiting it. The errors are troubling, and so is some of the sourcing, writes Toby Manhire. Support our mission to analyse and uncover the new New Zealand. Click here to learn more about how you […]

A new biography of the prime minister was written by two authors trying hard to tell the story of a country without visiting it. The errors are troubling, and so is some of the sourcing, writes Toby Manhire.

Support our mission to analyse and uncover the new New Zealand. Click here to learn more about how you can support our work from as little as $1.

There are worse problems to have than a queue of people wanting to write books about your success. But Jacinda Ardern has consistently rebuffed invitations to participate with would-be biographers who come knocking. The reasons are clear enough: to give an interview for such a project risks the inference of “authorised”. And there’s danger, especially in humility-exalting New Zealand, of coming across as self-aggrandising, of going along with lionisation while you’re still at work. It’s just, as Ardern herself has said, all a bit “awkward”.

So yesterday the prime minister was keen to make clear that some of the publicity for a new biography, Jacinda Ardern: Leading with Empathy, wasn’t quite right. Any suggestion that she had given “exclusive interviews” for the book was off the mark. She had spoken to co-author Supriya Vani in 2019 on the basis that she would appear along with a list of others for a book about women and leadership. Had she been misled? “Clearly I was,” Ardern told reporters.

The timing was especially tense, given the controversy around a proposed film about the response to the March 15 mosque attacks. The stated intention to put Ardern, as played by an Australian actor, at the centre of the film was not just awkward, but an insult to the New Zealand Muslim community. No wonder Ardern was so keen to disassociate herself from the project, which is now surely doomed even before it gets hawked along the Croisette.

Which brings us to another Ardern “problem” that many world leaders would kill to have. The international media can’t get enough of her. It would be absurd for her to rebuff the attention wholesale: to do so would not be in the interests of the country for which she is leader, figurehead and ambassador-in-chief. But it has its drawbacks: whether in frustrating local journalists who struggle to get face time, or in feeding ammunition to adversaries eager to claim that she’s interested primarily in global celebrity.

The appeal of most coverage abroad is the same as its principal shortcoming. They want Ardern in glorious Cinemascope, not quotidian, granular detail. The audiences of The Today Show don’t especially want to hear about the minutiae of mental health provision or Treasury advice on interest deductibility for property investments.

And so to Jacinda Ardern: Leading with Empathy. Co-written by Supriya Vani and Carl A Harte, the book does not do away with details. But it’s certainly not going to let them get in the way of the primary task: adulation. The single mention of KiwiBuild is a passing reference to its “slow start”, on the way to noting that “the building of state houses increased, exceeding targets”. The position is made clear in the opening pages. “Ardern’s empathy and commitment to her principles … are consistent – in her DNA, if you will.” “Her message, innate charisma and humanity are a tonic for those who have lost faith in politics.”  “Journalists more used to jousting with politicians keenly follow her words, marvelling at her warmth in public interactions and commitment to principles.” 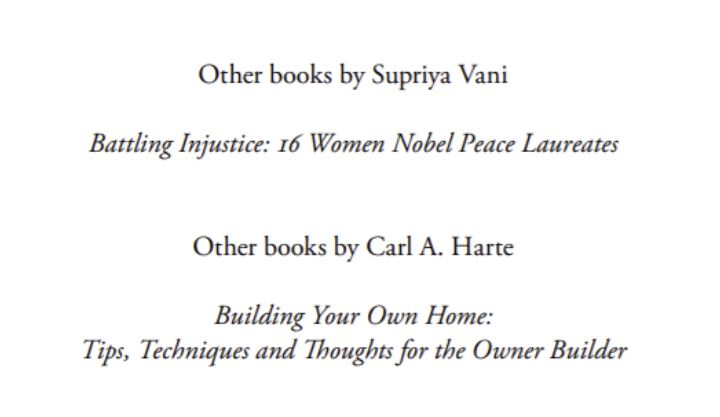 A page from the book.

More seriously, throughout the book, New Zealand’s centre-right party is described as “the Nationals”. “Her nerves almost collapsed when it seemed that the Nationals had edged out Labour.” “English and the Nationals wouldn’t give in so easily.” “For the Nationals, it was a disaster.” And so on. This is presumably down to a confusion with the Liberals’ coalition partners in Australia, who go by the name the Nationals. It’s a mistake you’d expect from no one who has the most basic familiarity with New Zealand politics.

There are lengthy and enthusiastic pages on the future prime minister’s courtship. Among them is this account of of the Metro Restaurant of the Year Awards in 2012: “The smiles were between Ardern and another handsome man, his features suggesting his typically Kiwi, mixed European and Māori heritage: broadcast personality Clarke Gayford, who was the host of the evening.” In case you did a double-take there, later in the book we’re told: “On her father’s side of the family, Neve has Māori ancestors.” Is that true? I don’t know. But it does seem a strange way to break the news if it is. There’s no reference given for this fascinating information. The likeliest source, as far as I can tell, is a site called Ethnicelebs.com.

There’s no source given, either, for another passage that caught my eye. In a chapter headed “Victory Day for Winston”, we learn that the vote tally in the 2017 election left New Zealand First kingmakers. Here’s the passage:

“None of this was a surprise to New Zealanders, least of all those in politics. They’d all heard the joke, that MMP is a system in which voters get to choose their favourite candidate and party, and then Winston Peters decides who wins.”

The reason it caught my eye is because the joke that they’d all apparently heard is, well, my joke. In a piece for Barker’s magazine and The Spinoff, published in 2018, I wrote:

“As the joke goes, MMP is best explained as a system in which voters choose their preferred candidate and party, and then Winston Peters decides who wins.”

I’d gone with “as the joke goes”, I confess, because I was repurposing a line from a Herald column in the leadup to the 2017 election. It’s no trophy-winning joke. It’s highly likely other versions of it exist. But I don’t think it’s quite right to say, sadly, that everyone has heard it. And if you compare those emboldened passages above, and consider there’s no attribution whatsoever, and that a page earlier there’s another quote from that 2018 piece, again unsourced, the most generous way to describe it is shabby.

The interview with Ardern was conducted in 2019, and it’s likely the manuscript was nearly ready to go when the pandemic tipped all our tables. The chapters on the Covid response feel bolted on. One, in particular. It goes deep on Winston Churchill. Very deep. The word “Churchill”, in fact, appears in the book half as many times (38) as does the word “Covid” (76).

READ:  Bernard Hickey: A clash of the titans is coming over the future of money

Following a summary of What Churchill Did in the War, which runs across three pages, the authors tell us: “Jacinda Ardern could hardly have found a better role model for leading New Zealand through the Covid-19 crisis than the man who led Britain through its Darkest Hour. The Western world as we know it would probably not exist without Winston Churchill, widely recognised as the greatest crisis leader in history. In the decades since Prime Minister Winston Churchill left office, many historians, scholars and management experts have studied this great leader – his strengths, his methods, his effectiveness. So, too, it seems, did a young New Zealand woman on her OE, just a decade before she would lead her country.”

That “so it seems” is working extremely hard. It’s premised entirely on an interview with a former school teacher of Ardern’s, in which he describes catching up with her when was working in Whitehall in London. She’d given him a tour and pointed out an office where Churchill once worked. The chapter is headed “Cometh the Hour, Cometh the Woman”.

Covid-19 also scuppered any hopes the authors had of actually visiting New Zealand.  “We had planned on conducting numerous viva voce interviews in New Zealand, but of course Covid-19 put paid to this,” they write in the acknowledgements at the end of the book (Jacinda Ardern is thanked “first and foremost”). “Happily, messaging and Voice over IP (VoIP) and email, along with digital and print sources saved the day.”

Whether it’s the power of VoIP, fertile imagination or heavy reliance on the sensory perceptions of others, the descriptions of New Zealand are rich with feelings and observational detail. Murupara, where Ardern spent her early years, is “a place that feels as if it is drifting, somehow behind in time”. The town, “one can see, was once a thriving settlement”.

The drive from Greymouth to Christchurch is described with cherish. “The motorcade headed inland on State Highway 73.” Motorcade is not the word many would use to describe Ardern’s 2017 campaign van and accompanying DPS car, but let that not delay us. “It’s a route best taken at leisure, across quintessential New Zealand terrain. The road meanders through valleys, beside lush riverside fields and between mountains. The countryside is exquisite here, rugged, verdant for the several metres of rain that falls each year. Across narrow one-lane bridges, the route takes you onto open, sweeping roads that carve their path along the valley floor, beside river plains with gravel and rocks strewn across their breadth … The early spring sunshine warmed the chill from the air.” You could almost be there.

The book is not without merit. There might be little new here, but, the Covid skim aside, it covers the territory well, corralling a range of chiefly secondary sources. Paddles the cat gets a chapter. There are some good sentences. I liked especially: “Cheese is an Ardern passion.” Most of the important relationships are covered, sometimes movingly. There is an energy and drama in the telling of Ardern’s first day leading the Labour Party. This is not a book aimed at New Zealanders. International audiences will probably enjoy it, if they can’t get hold of Madeleine Chapman’s book.

READ:  Our favourite moments from Succession (so far)

And I don’t take issue, either, with the overarching thesis. Ardern is an unusually empathetic leader. She has shown an extraordinary ability to deploy compassion and steel in dealing with crisis. It’s really no wonder there’s that queue of people wanting to write about her.

It’s just the whole exercise is so utterly uncritical, fawning, cloying. At every other page, my shoulder blades clenched together. The repeated references to “Aunty Jacinda”, as if that’s something people say. The weird elisions. Not just Churchill, but also: “Through Ardern, New Zealand has shown a kind of moral leadership that it once did in granting women suffrage.” Or: “Prime Minister Jacinda Ardern may well be remembered in much the same way as her hero, the great Ernest Shackleton from the Heroic Age of Antarctic exploration.”

To be fair, Supriya Vani is not pretending to write anything but a laudatory, adoring book. In a post published on “Writer’s Digest” last week, she offers her advice on “How to Write a Biography of a World Leader”. The very first step is this: “Before writing the biography, make sure you can resonate with the qualities of the leader to ensure you’re writing a positive biography.” No doubt, she’s done that. “Awkward” doesn’t begin to cover it.