The solution for getting vaccine rates up won’t be government-distributed vouchers, nor is it in staring helplessly at the tracker every day shortly after 1pm, writes Anna Rawhiti-Connell. My favourite online pastime at the moment is checking the various trackers that chart the progress of Aotearoa’s Covid-19 vaccine roll-out. A few minutes after the 1pm update, […]

The solution for getting vaccine rates up won’t be government-distributed vouchers, nor is it in staring helplessly at the tracker every day shortly after 1pm, writes Anna Rawhiti-Connell.

My favourite online pastime at the moment is checking the various trackers that chart the progress of Aotearoa’s Covid-19 vaccine roll-out. A few minutes after the 1pm update, a mighty roar can be heard from my office-cum-cave. “UPDATE THE TRACKER” I yell, startling a dog who is already anxious enough to warrant repeated Google searches for “music to calm dog”. The best playlist we’ve found so far? ‘Relaxing Music for Pregnant Cats’.

During lockdown, my partial form appears out of the pile of clothes next to my bed each morning. I am part loose sweatshirt and part the least strangulating underwear I own. As the freedom we want becomes increasingly tied to vaccination rates, my full form is only assembled after I’ve imbibed the sweet, sweet nectar of the trackers, staring at them for a few minutes, willing them to move with my eyes.

Like a lot of like-minded people I watch the 1pms and the 4pms hoping to see a shining silver bullet held up, presented to the people as Simba was to the Serengeti. The answer that will both let me see my friends and family, and quell my anxiety about the crackle in the air.

The other morning, while at our local cafe, 200 metres from our suburban home, my husband heard the crackle first-hand, yelled at him from a car for wearing a mask. He is fine. We are fine. But my plan to get through lockdown by remaining civil and empathetic is beginning to feel like bringing a rubber knife to a gunfight. His response? An analogy about the same waka, the same destination, but frustration at fights over the paddles.

After a question about vaccine misinformation on the prime minister’s Facebook page at Monday’s press conference, I ignored all basic advice about not losing your mind during a pandemic, and went and had a look at the post in question. I required a very hot bath, a very cold drink and ‘Relaxing Music for Pregnant Cats’ immediately afterwards. 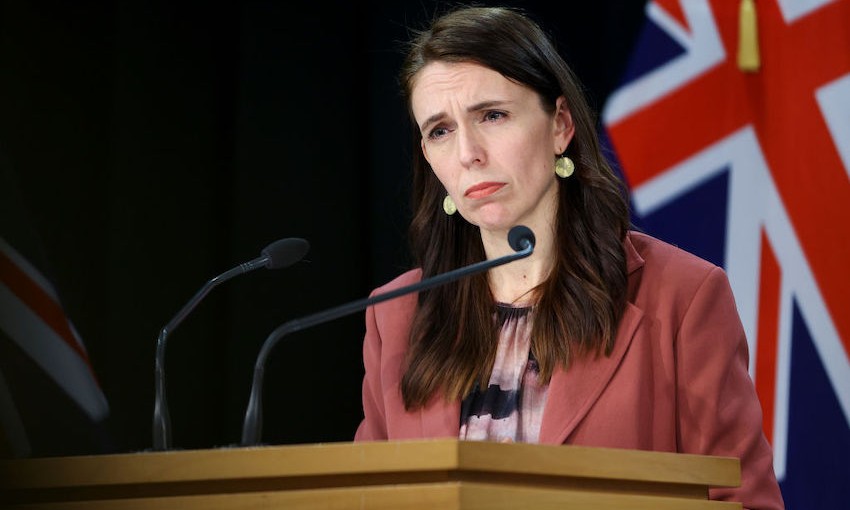 What’s equally wild and disheartening about the comments is that most people are after the same thing. Freedom. Certainty. Less fear. A cognitive framework from which to reconcile the unbearable amount of ambiguity our brains are drowning in.

Ambiguity is a tough thing to reckon with. Most people are deeply uncomfortable with it. In response to it, we seek out a story to stick to and a cast of characters, heroes and villains, who we can trust or blame. The dominant discourse is that vaccinations are a large part of our way out. This is evidence based and one I am entirely comfortable with.

Aided by the large interventionist safety blanket provided over the last 18 months (very grateful!), my deep desire for a silver bullet and unprecedented visibility, the cast in my head has been “the government”.

I’ve rolled around in the marketplace of ideas and willed that the hundreds of suggestions made about how to get people vaccinated be picked up and effected immediately by “the government”. I have no idea how they might work or whether they would work but I crave big, fast solutions enacted by those with their hands on the biggest levers.

I think it’s a shared appetite among many people at the moment even if we disagree with what’s being suggested. Five point plans for vaccinating a whole population! How to agile sprint our way to reopening the border! Six things the government should be doing right now!

It’s why a suggestion from John Key that we don’t let some very specific types of kids get their crunk on at Rhythm and Vines unless they’re vaccinated, gobbled up copious amounts of airtime this week. It’s why people have been pressuring the government to set a single, blanket vaccine target for the whole country, despite that meaning an averaging out of higher rates of vaccination for some parts of the population and a lower rate for others. It’s why we’re all still watching the world’s worst TV show every day, hoping some carrot or stick will be the one simple solution we’ve been waiting for. Wading into those Facebook comments did require a deep sweat session in the bath, but it also made me realise that while I maintain I am right about my story, there are fractures and divisions so messy and so complicated that the way out of this may not be via large scale adoption of mandates or measures dreamed up by one person.

The population is not a single homogenous blob that can be solutionised into getting vaccinated by one person with their very specific view of what the population looks like. It’s highly unlikely an entire ministry can sort it either without a decentralised approach that trusts those who know their communities, and resources to take the punts that can only be delivered  by matching the right knowledge and approach with the right people.

This is why I find John Key’s comments earlier in the week disingenuous. He was in government long enough to know how it works and what its limitations are. He was there long enough to know that when he says the government should incentivise vaccinations for young people with vouchers, a team of officials has to work through how that might work.

Vouchers. Think about it. By snail mail, at vaccination locations, or digitally delivered? Is this something we think is fair to ask the neighbourhood pharmacy to be in charge of? What if they forget and people complain? Food vouchers? Fast food vouchers that negate public health guidelines? Healthy food vouchers? Will people get vaxxed for an apple or four? Apple vouchers? A multinational corporation that doesn’t pay tax? Petrol vouchers? Aren’t we meant to be driving cars less?

The thing with big levers is that they’re clunky and are often designed to drive one very big machine. What we probably need to get comfortable with is the idea that one big machine needs to power a whole lot of smaller ones, specifically designed for their intended users. Incentives at a mass, government-initiated level might not work, but voucher incentives delivered by businesses or small communities who know their staff and their people could.

Unfortunately for me and my anxious manifesting energy, that means less visibility and surety around what’s being done. It means more ambiguity as we wait for people to beat the street and move people, possibly one by one, from hesitant to vaccinated. It probably means more sweating in more literal and metaphorical baths. This is a movement. Movements are seldom tidy. They are never directed from the top down, they are the product of small fires everywhere.

While the mokoroa grub is small, it cuts through the white pine.