With the much-hailed train service between Auckland and Hamilton now running for more than a month, Alex Braae was sent down country to ride the rails. It takes about an hour to get from my office to Papakura station, from where Te Huia departs. Even with the Morningside station just down the road, and efficient changeovers […]

With the much-hailed train service between Auckland and Hamilton now running for more than a month, Alex Braae was sent down country to ride the rails.

It takes about an hour to get from my office to Papakura station, from where Te Huia departs. Even with the Morningside station just down the road, and efficient changeovers between the Western and Southern lines, that’s a long time to spend on trains in order to get on a train.

Te Huia has been the beneficiary of massive hype, both from supporters and detractors. On the first day of operation, TVNZ’s John Campbell levitated with excitement through the carriages. Within about a week, his rival on Newstalk ZB Mike Hosking had branded it a failure. There have been anecdotal reports of all sorts of patronage levels, from empty ghost trains to packed out weekend services.

The Spinoff forgot to get tickets for the inaugural service. So instead, we decided to wait a while, and then send someone out to review Te Huia on the typical service on a typical day. I wanted to go and visit my brother in Hamilton, and was heading down country anyway, so got the job. The trip was the second and final service on a Thursday night – Te Huia trains go north twice every weekday in the morning, and then south twice in the evening.

Perhaps everyone had just caught that first service, because the second one certainly didn’t have a lot of people on it. The first carriage I sat in was about a quarter full, with no competition whatsoever for a table. I’d half expected some casual chatting could be done across said table, but the only other person in that particular section was sitting across the aisle, and immediately opened his laptop to dive into a spreadsheet. Fair enough.

Later on I did a walkthrough to see if I had picked the only empty carriage. But it turned out the opposite was true – in the carriage right up the front of the train, there was a grand total of two people. They didn’t look all that interested in sharing in the magic of trains with me either. 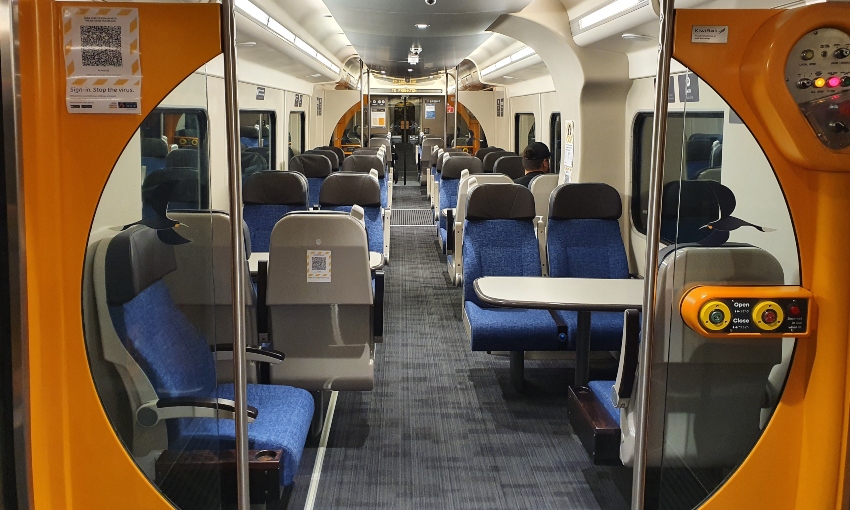 When Te Huia was first announced, there was a bit of bafflement at some of the numbers being thrown around, like the capacity to move approximately 500 people a day. Surely that wouldn’t even make a dent in the Southern motorway’s congestion problem? When I showed them the photo of the near-empty carriage, a colleague somewhat optimistically pointed out that each person did still represent a car taken off the road. Perhaps both points are right.

The point of the walkthrough was to find the dining car. Now, if you’ve never been on a train with a dining car before, start lowering your expectations. For some, the term will conjure up images of evening dresses and gently rattling chandeliers, and perhaps being allowed to smoke, but only if it’s a cigar or a pipe. I thought I was being a bit more realistic by imagining something more like the Northern Explorer dining car, which from memory had some nice Wishbone-type heat and eat meals. 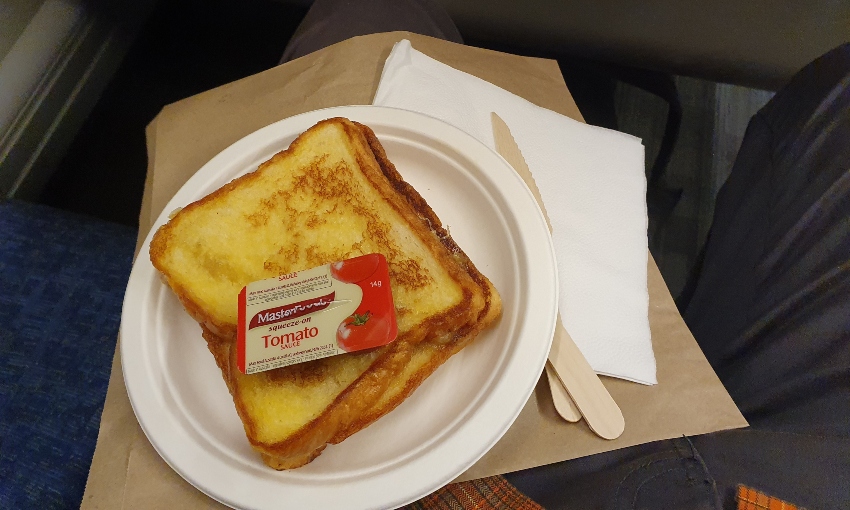 On Te Huia, it was more like a cabinet, a fridge and a microwave. The actual dinner I ended up having was a tasty but limp cheese toastie, with onions because I decided to treat myself. There were beers too, not a great selection, but something to take the edge off at least. The Eftpos machine refused to work because we had rolled out of cell service range, but the lovely woman behind the counter let me come back and pay for it when we got to Huntly sir, Huntly.

Part of the predicament Te Huia is now in as a service is the expectations of train advocates. I’m certainly one of them – having taken my fair share of buses all over the country, a fully functional intercity train network would be much preferable. It would be wonderful to think Te Huia is the first step  on the journey towards a goal like mass public transit between the “Golden Triangle” cities of Auckland, Hamilton and Tauranga.

But when you have to go so far to start the journey, and then it drops you off a good half-hour walk from Hamilton’s city centre (which for about nine months of the year will be after dark) it doesn’t feel like that. It feels like a scrap of food that gets thrown to placate yapping dogs like myself, who want to see something much more ambitious and comprehensive. And if patronage numbers stay low, then it’ll become increasingly difficult to justify not only this service, but any sort of utopian public transport network.

So what was good about it? I couldn’t have eaten a warm cheese toastie while driving to Hamilton – especially with the limpness of the bread, it would’ve gone everywhere. I couldn’t have knocked off a few hours of work while stuck in traffic. I couldn’t have stared blankly out the window at the dusk settling over burgeoning commuter suburbs if I’d been at the wheel of a motor vehicle.

Te Huia is a train. It is nothing more, and nothing less. It leaves the station at the time it says it will, and then arrives at the end of the line on schedule. The wifi works, there’s coffee, and the seats are comfortable enough.

And maybe that’s fine, if you accept that’s all it is. But as the train glided past cars grinding slowly down the motorway past Pukekohe, it was hard to avoid feeling like Te Huia is a missed opportunity to think bigger.