A picture paints a thousand words, which is why politicians love holding up pieces of paper and other miscellany to make a point.Jacinda Ardern loves a visual aid in times of lockdown, frequently busting them out during the 1pm press conferences to communicate complex issues in a single glance. A good visual aid does all […]

A picture paints a thousand words, which is why politicians love holding up pieces of paper and other miscellany to make a point.

Jacinda Ardern loves a visual aid in times of lockdown, frequently busting them out during the 1pm press conferences to communicate complex issues in a single glance. A good visual aid does all the heavy lifting for a politician: it informs us, it enhances their message and it sticks in our memory. A bad visual aid also sticks in our memory, for the wrong reasons. Either way, these politicians have the world in their hands, and we are merely pawns in their visual aid game of life. Ardern isn’t the only politician who understands the power of holding something up for the world to see, as long as the world is standing two metres away or has binoculars handy. We’ve pressed our faces to the screen to find the most memorable examples of New Zealand Politicians Holding Things™, for better or worse, and ranked them accordingly.

Have we included every example of a politician holding something? Of course not, we’re not hand stalkers, but print off this ranking on A3 and hold it up during your stupid little lockdown walk anyway. He’s not a politician, but the director general of health’s face lit up like a sunbeam this week when he revealed his own snazzy visual aid. It was either a squiggly graph showing last year’s Covid-19 infection trends or a mountain drawn by an emotional junior staffer who’d drunk too many lockdown Fantas, but was it enough? No, Ashley Bloomfield, it was not. Get yourself a pack of neon highlighters and some glitter and come back to us. 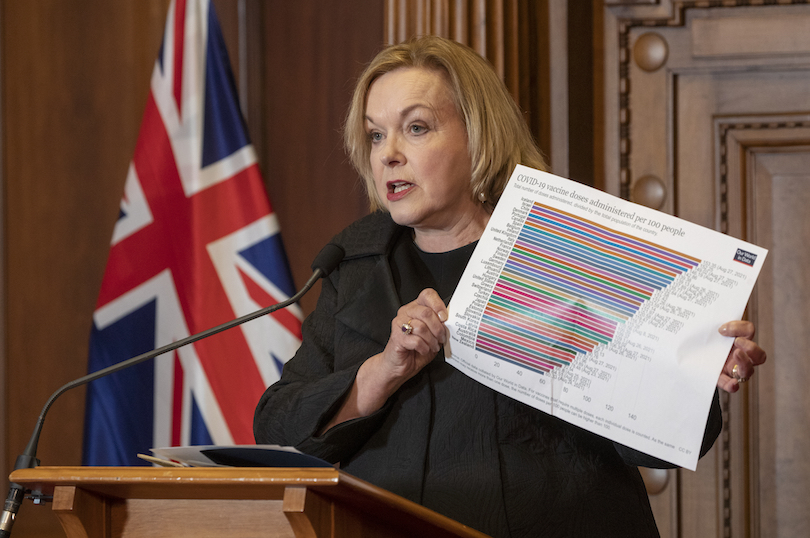 The prime minister isn’t the only one with hands and a printer, and this week Judith Collins climbed aboard the chart train with her own visual masterpiece plucked fresh from the National party photocopier of dreams. Her graph shows New Zealand in “dead last” on the OECD Covid-19 vaccination rates, but to this hangry writer stuck at home, it looks more like a confusing ranking of lolly snakes. Lime deserves better, Judith, but you gave it a good try. No A3 piece of paper is safe from the prime minister, who prefers to keep her visual aids folded and hidden on her podium of secrets until she’s ready to drop them like a weapon of mass communication. There’s nothing fancy about her props, no razzle dazzle with her visual aids, and the casual fold down the middle of the page gives the whole thing a primary school project vibe. The 1pm press conference is the nation’s school assembly though, so we’ll allow it. 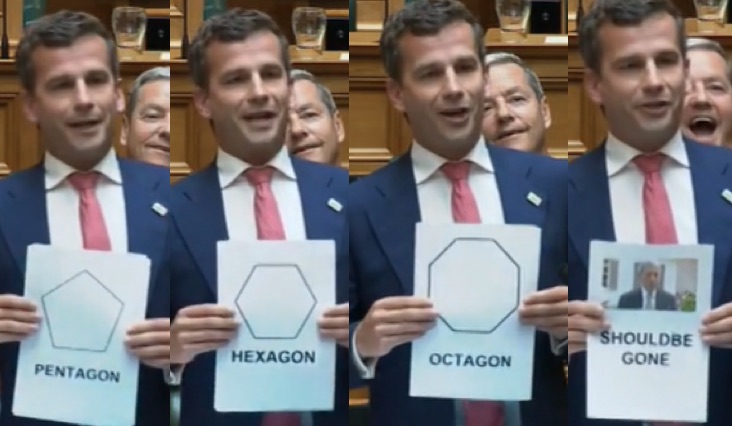 If Jacinda is the queen of the A3 paper visual aid, then David Seymour is the prince who is banished to another country and starts leaking the family secrets to his unofficial biographer. The Act leader’s passion for this educational 2020 visual aid is admirable, but sadly, he gets carried away with his takedown of then deputy prime minister Winston Peters. He’s in love with the shape of you, Shouldbe Gone, but there are too many small sheets of paper and the end result is an indistinguishable face and three people clapping. Not angry, just disappointed. Sick of talking to people? Get a sign. Winston Peters proved less is more with this timeless visual aid, a single word that succinctly answered media questions about a controversial financial donation in 2008. Sturdy and simple, this sign reflects the lack of wibble-wobble and shilly-shally in Winston’s mood. The answer is NO, New Zealand, even though the answer later very much appeared to be YES. Labour’s Grant Robertson got crafty back in 2013, whipping up a “Web Of Deceit” on some huckery old cardboard and showing it off like he’d just won an Honours Award at the local A&P Show. Prime minister and apparent part-time spider John Key was at the centre of Robertson’s web, while those caught in it included Kim Dotcom “and his giraffe” and what appears to be a budgie, an acorn and the alphabet. Politics! Always full of surprises. Cats are famous swing voters, but David Seymour threw caution to the wind in 2018 when he persuaded two felines to join him in a video appeal to TOP voters. These cats could strike out at any moment and Act hate strikes, but Seymour didn’t care. He persuaded enough animals to vote him back into parliament last year, so who’s laughing now? Still cats, I guess. 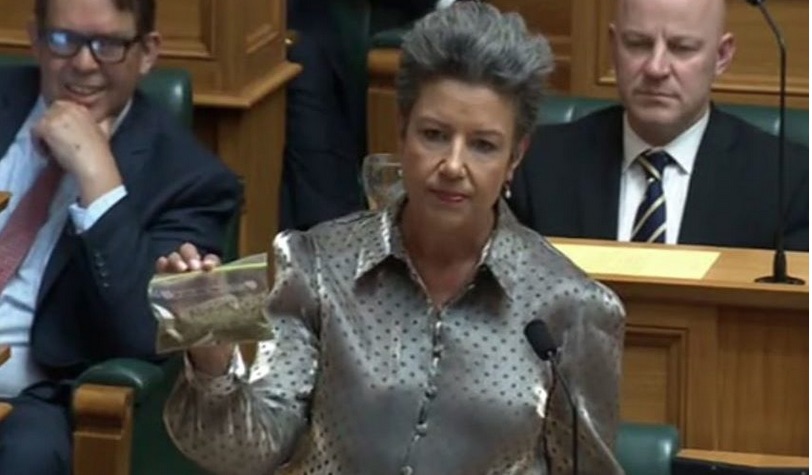 Look how mad National MP Paula Bennett was in 2019 when this dried oregano pretended to be marijuana. Bennett used this visual aid to highlight the dangerous amount of seasoning we could buy each day if the 2020 cannabis legalisation bill passed, and her wee baggie represented a painful future. Plastic bags everywhere, herbs and spices raining down upon us. If you didn’t trust oregano before, now you never will. Paper is for wimps and fish are destined for more than swimming, so bravo to then Labour leader David Shearer for using two dead snapper to protest commercial fishing rules in 2013. If your first thought on a politician bringing fish into our house of representatives is “why?”, or “this was definitely a biblical portent that his leadership was finished”, then please get in the sea and take your fish with you. This is how politics works, and all complaints should be scribbled on a folded piece of A3 paper and held up to the nearest mirror. A master move, a power play. Speaker of the house Trevor Mallard wins all the Politicians Holding Things awards for tending to Labour MP Tamati Coffey’s six week-old baby during a 2019 parliamentary debate. Mallard made it seem completely normal to bring your kid to work, thereby encouraging tomorrow’s future to enjoy all the dead fish and petty hexagons flying around the workplace. Congratulations to arms everywhere, your work here is done.