The Black Caps are in England, with their clash against India in the final of the World Test Championship only three weeks away. Which side has the edge? Michael Appleton breaks down the stats.The Black Caps have arrived in England for what some consider their most important tour in a generation. This starts with the […]

The Black Caps are in England, with their clash against India in the final of the World Test Championship only three weeks away. Which side has the edge? Michael Appleton breaks down the stats.

The Black Caps have arrived in England for what some consider their most important tour in a generation. This starts with the first of two tests against England at Lord’s from next Wednesday, June 2. Then, over five days in Southampton from June 18, they have the chance to become the inaugural world test champions. Will they take it?

My baseline assessment should be an obvious one: either side could win the World Test Championship (WTC) final. New Zealand v India is a genuine David and Goliath contest. India is the wealthiest, most populous and most powerful major cricketing nation in the world. New Zealand is the smallest.

Yet India and New Zealand both have strong, well-matched test sides which, in the right circumstances in the final, could prevail. The bookmakers agree, refusing to install either team as strong favourites. They have tended to give both sides a 40-50% chance of winning the final.

Anyone who claims confidently that one of the two teams will definitely win the final is not paying close enough attention to the evidence, which should give Indian and New Zealand fans reasons for both optimism and trepidation. But it is possible to sketch out factors which favour each side. Here are some reasons to be cautious, as well as reasons for optimism for each side.

Reasons to be cautious

For India: Sharma, Kohli, Pujara, Agarwal, Rahane, Pant, Jadeja, Ashwin, Shami and Bumrah. For New Zealand: Latham, Williamson, Taylor, Nicholls, Watling, De Grandhomme, Jamieson, Wagner, Southee and Boult. No other team has more than seven such players. When you have this many good and great players competing on the cricket field, you should be cautious about thinking you know who is going to win. Both sides have players whose performances in England have been mediocre. To pick on the batters: Rahane, Pujara, Pant, Latham and Nicholls all average under 35 in international matches in England (all formats). On the bright side, both Williamson (average: 58.5) and Sharma (average: 56.5) have shown they can churn out runs in England. The point is: we should be careful not to extrapolate form on the test grounds of Mount Maunganui and Chennai to Southampton.

We only beat each other when at home

Southampton’s weather and the pitch

The Cricket World Cup semi-final between New Zealand and India in Manchester in 2019 took place over two days due to English rain in early July. Many Indian fans believe this assisted us to win – as it made our fast bowlers more potent, dispatching the vaunted Indian top three for three runs between them. There’s a decent chance it will rain in Southampton for the WTC final, too: on average, there is rain in the city nine out of 30 days each June. Rain would probably favour New Zealand, by blunting the impact of India’s spinners. (There’s a sixth day available to make up for lost time if it rains; if the game is drawn, the WTC title is shared.)

The pitch is another unknown. One assumes the curator will have been instructed to prepare a pitch that will last, so the WTC final goes the distance. In general, Southampton is a more spin-friendly pitch relative to the average English pitch – but so far this county season it has tended to favour pace bowlers (and generated reasonably low scores). All of this – the rain and the pitch – creates significant uncertainty, which is a barrier to confidently predicting which side is favoured.

With all that said, what factors favour India and what favour New Zealand?

The case for India

If the WTC final is decided by which side can better exploit a tiring pitch in the third and fourth innings of the match via expert spin bowling, then India will almost certainly prevail. India’s WTC squad has over 650 spin test wickets in it; New Zealand’s has 93, of which 30 were taken by part-timer Williamson. Both Ashwin and Jadeja are world-class spinners, averaging under 25. That said, their records in England are more modest – so how much a factor they will be will depend very much on the pitch. 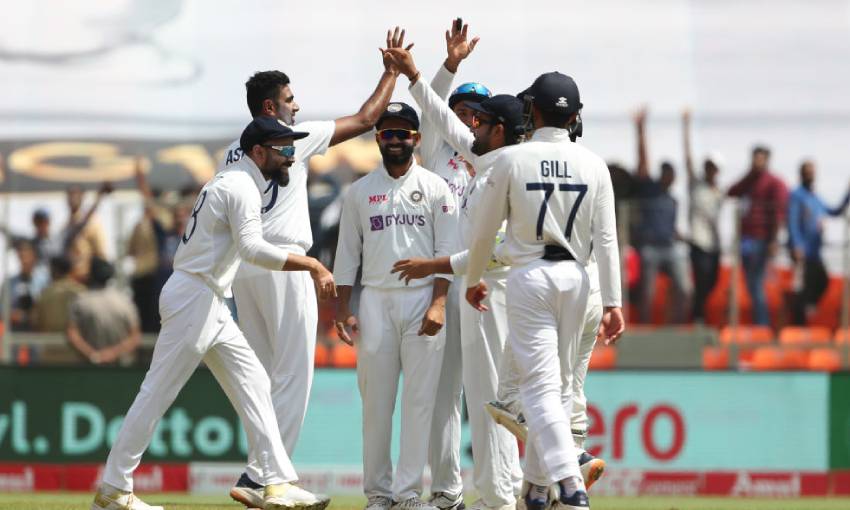 Ravichandran Ashwin of India celebrates with teammates after taking the wicket of Jonny Bairstow of England in a test match earlier this year. (Photo: Surjeet Yadav/Getty Images.)

READ:  NZ faces big decisions on opening up. What can we learn from Singapore?

India and New Zealand have undoubtedly the best test records at home in the last five years, winning 22-2 and 17-1 respectively. Away from home, India’s record is stronger. Both sides have consistently struggled to win in each other’s countries as well as in England and South Africa. But while India has recorded two (amazing) test series wins in Australia, we were thoroughly dismantled across the Tasman. India also made light weather of Sri Lanka, a team we only drew our series with. The recent experience of India’s side winning an astonishing series win over Australia – including the breathtaking chase in the deciding test in Brisbane – will give the team confidence that they can achieve anything outside of India.

India has much more experience at playing (and winning) high-stakes final matches – whether Cricket World Cup, Champions Trophy or World T20 – than New Zealand. They’ve made nine such finals, and won five. New Zealand has played in four finals, and won only one. Our one single win came in the Champions Trophy in Kenya in 2000, well before any of our current squad was playing professional cricket. Conversely, the 1983 and 2011 Cricket World Cup victories stand in the Indian collective memory as evidence that they can win the most important games. For New Zealanders, fresh in our mind is falling at the final hurdle at the last two CWCs, albeit by the barest of margins, against England in 2019.

The case for New Zealand

The final is in England

If the final had to be played on neutral ground, England would have been New Zealand’s first choice of venue – and India’s last. English conditions, both the weather and the pitches, are far closer to what New Zealand players experience at home than what Indian players do. During the past decade, when India has powered itself to the top of the test rankings, by far its worst hunting grounds have been England (won two, lost 11) and New Zealand (won zero, lost three). Conversely, England is a middling venue for New Zealand: we drew our last test series there (in 2015) and have had much more success there than Australia, South Africa or India. Our preparation is better

India, New Zealand and England are the top three ranked test sides in the world. In the fortnight before the final, the Black Caps will be playing two test matches in English conditions against an injury weakened but still strong England side. The Indian squad will be playing pick-up matches amongst themselves. This is a huge advantage for New Zealand. India last played a test match in early March in Ahmedabad. In the three and a half months between then and the WTC final, their players will have appeared only in limited overs cricket – and mostly T20 (including IPL) matches.

READ:  To pee or not to pee: A full timeline of the confusing level three bathroom rule

This matters because touring test sides (including India) tend to be slow starters. While you get used to the new conditions, you play below your best. None of New Zealand’s five test wins in England have come in the first test of a series. And in the opening test match of away series against Australia, New Zealand, South Africa and England since 2010, India have won 8% and lost 75% of the time. In the second and subsequent test matches, they’ve won 24% and lost 59% of the time. It’s easier to win as the series goes on. Importantly, the WTC final will be New Zealand’s third test match on this tour of England and India’s first.

New Zealand has had the wood on India

This history might not be so relevant if not for the fact that many of India’s players will definitely remember the Cricket World Cup semi-final against New Zealand in Manchester less than two years ago. Having topped the league table, a much fancied Indian side was undone by a remarkable Black Caps bowling performance. The thought that history could repeat itself will be there. If it does, it will be a continuation of recent New Zealand over-performance against India. Since 2014, India has won more games than it has lost against every opponent – except the Black Caps.

The World Test Championship final will be the Black Caps’ third chance in just over six years to win a world title. It’s probably their best chance of the three. Whereas in 2015 and 2019 they had to beat the in-form tournament hosts, in 2021 both sides are a long way from home. To become world champions, all they have to do is defeat one of the most dominant and fancied cricket sides India has ever produced. Thankfully, on the cricket grounds of England, they’ve had some recent experience of doing precisely that.

Follow The Spinoff’s cricket podcast The Offspin on Apple Podcasts, Spotify or your favourite podcast provider.