Welcome to The Spinoff’s live updates for August 21, day five of level four lockdown across Aotearoa. Catherine McGregor is on duty today; get in touch at catherine@thespinoff.co.nzOur coverage of Covid-19 depends on support from members. Click here to join.12.45pm: Hipkins and Bloomfield to appear at 1pmIt’s a day off from public appearances for the […]

Welcome to The Spinoff’s live updates for August 21, day five of level four lockdown across Aotearoa. Catherine McGregor is on duty today; get in touch at catherine@thespinoff.co.nz

Our coverage of Covid-19 depends on support from members. Click here to join.

12.45pm: Hipkins and Bloomfield to appear at 1pm

It’s a day off from public appearances for the prime minister, with minister Chris Hipkins fronting today’s 1pm press conference alongside director general of health Ashley Bloomfield. We’ll have all the key information, including new cases numbers, as soon as it comes to hand.

Some puzzling issues have arisen on the Ministry of Health’s locations of interest page, reports Harkanwal Singh, the creator of The Spinoff’s own map based on the ministry’s data.

While the core functionality has not been affected – all locations of interest are correct – the page is experiencing issues that those using the data to make their own tools will find frustrating.

Locations that were deleted yesterday are now showing up again on the page. In addition, every update on the page is showing as having been added on August 22, so “there is really no way of knowing which are added today,” Singh says.

The page had been broken down by regions which made it easier for people to separate data for Wellington and Auckland. That has been removed as well.

It is understood that the ministry is working on a fix.

Nine people are dying from Covid-19 daily in Fiji, RNZ reports, with the west of the country now surpassing the central division where the outbreak is centred.

In its latest update, the government said the country had a seven-day rolling average of nine Covid deaths per day. Health secretary James Fong said the country averaged 1462 new cases over the past week.

The death toll now stands at 433 – 431 of them from the latest outbreak that began in April.

10.50am: Ashley Bloomfield gets first shot

Meanwhile, in breaking vaccination news, it seems that not even the director general of health likes watching the needle go in. 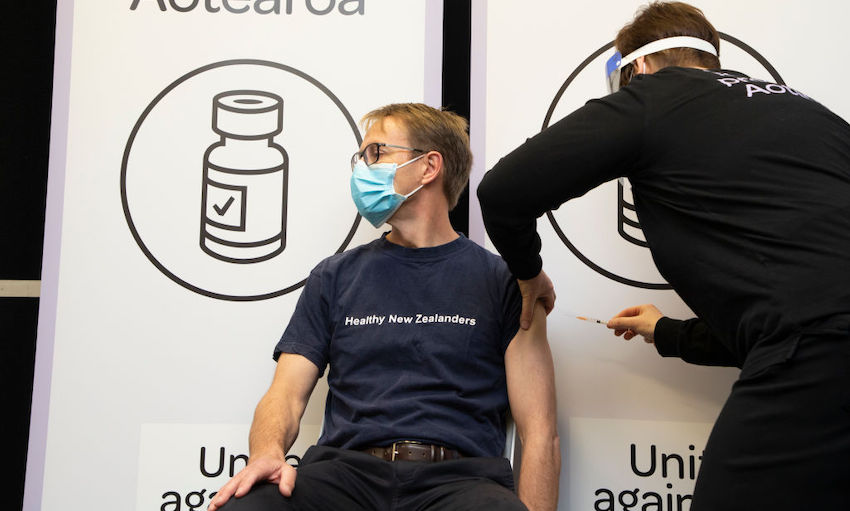 10.25am: No guarantee cases confined to Auckland and Wellington, says Baker

University of Otago epidemiologist Michael Baker says it’s too early to be confident the outbreak has been confined to Auckland and Wellington.

READ:  Haz Beats and the time Home Brew took a goat to the music awards

“I don’t think we can guarantee that,” he told RNZ this morning. “The other known contacts have been distributed all around the country so those people I imagine will be having the tests over the weekend and early next week so the results from those may not be available until Monday, Tuesday, Wednesday.”

Modelling that this outbreak could peak at between 50 and 120 cases was “still a pretty realistic range”, he said, given the fast move to level four lockdown.

“This is obviously a middle range estimate because it can be easily a lot more if one of those cases when they were infected went to a super spreading kind of event.”

He said mandating masks while inside essential business and services would help move the country out of lockdown faster. “This is not forever. This is just for this period when there is a risk of a circulating virus.”

10.00am: Major outbreak would put ICUs under ‘enormous pressure’ – Hipkins

The Covid response minister, Chris Hipkins, has defended hospitals’ preparedness for a mass outbreak of the delta variant. Pressed by Q&A’s Jack Tame on whether ICUs would have been overrun had the 58-year old Devonport man waited longer to be tested, Hipkins said that while a wide-scale outbreak would put the health system under “enormous pressure”, hospitals were in a much better position than they were at the start of the pandemic.

“We’ve got significantly more ICU capacity now than we did when we first started dealing with Covid-19 a year and a half ago and hospitals have contingency plans in place to convert general wards into facilities to cope with Covid-19 patients if we get to that point,” he said.

He later acknowledged that staffing capacity had not significantly increased. “ICU requires a very very high ratio of staff to patients… you can’t just magic up extra healthcare workers, staffing capacity will continue to be a constraint.”

He noted that DHBs have been upskilling staff to relieve pressure on ICU specialists in the event of a major outbreak.

READ:  “Between the Motion and the Act, Falls the Shadow.”

Asked by Tame whether the rise of delta meant New Zealand’s elimination strategy was in jeopardy, Hipkins said that “delta raises some big questions that we’re going to have to grapple with. Less than 24 hours between someone getting it and passing it on – that’s like nothing we’ve dealt with in the pandemic so far.

“It does change everything. It does mean that all of our existing protections are starting to look less adequate and less robust. So we are looking more closely at what more we can do there.

“But it does raise some pretty big questions about the long-term future of our plans.”

On vaccinations, Hipkins was adamant that no amount of money would have allowed New Zealand to receive its first Pfizer vaccine doses earlier than it did.

“The only way we could have increased the number of vaccines that we were administering earlier would have been to use other vaccines than Pfizer and we made the decision that Pfizer was the best of the options that we had available to us earlier in the year.”

As case numbers continue to rise in Auckland, he said people there should prepare for an extension to the lockdown.

The situation was less clear in Wellington, he said.

“We’ve still got a relatively low number of locations of interest there, at least one of our cases basically didn’t go anywhere in Wellington. Still a question mark there.”

9.20am: Free childcare for workers in essential services

As with last year’s nationwide lockdown, free childcare will again be made available to workers in alert level four businesses and services.

Workers in essential services with children aged up to 13 can access the free care. A list of 32 providers nationwide will be made available to parents from today.

The scheme is for workers in level four businesses and services, and other exempted services such as fire and emergency and border workers.

It is also only for those workers who do not have childcare in place – parents are expected to use their own private arrangements where possible.

Providers may offer options for childcare either in the child’s home, or in the carer’s home. “We’re aiming to provide as much flexibility as possible for those workers who need it,” said Covid response minister Chris Hipkins in a statement.

All 32 providers are licensed services that usually provide home-based early childhood education and each carer will be limited to caring for children from a total of one family only.

A student has tested positive at Western Springs College in Auckland’s inner west, parents were informed last night. The student is understood to have last been in class on Tuesday, August 17, but only until 10am.

Earlier on Saturday Pukekohe High School told parents that a member of staff had tested positive for the virus.

The combined rolls of the schools amounts to around 12,000 students.

8am: The day ahead

There’ll be a press conference from Ashley Bloomfield and Chris Hipkins today at 1pm with the latest case numbers and other developments. We’ll update all the essential details here.

The official case count stands at 51, but there’s every expectation that number will rise today and for some time to come. As Grant Robertson put it yesterday, “we just have to accept that things get worse before they get better”.

Last night Western Springs College announced a student had tested positive, bringing the number of Auckland secondary schools hit by Covid-19 to seven. We’ll have more details on the new case shortly, and on the cases at the other schools, and at Auckland University and AUT, as they come to hand.

The number of cases in Wellington is now six, but few details have emerged so far. We’re hoping that more information about those cases, all linked to the Auckland outbreak, is forthcoming today.

We’ll also check in with Victoria as it starts the first day of its new statewide lockdown, and with NSW, which posted a record case count of 825 yesterday.