Reweti Kohere listens in as restaurateurs and bar owners attempt to devise a strategy to save their industry, before it’s too late. It all sounded so warlike. The generals of a sector besieged by lockdowns, haemorrhaging money and afraid it won’t survive convened a virtual situation room to devise a battle plan before drawing swords […]

Reweti Kohere listens in as restaurateurs and bar owners attempt to devise a strategy to save their industry, before it’s too late.


It all sounded so warlike. The generals of a sector besieged by lockdowns, haemorrhaging money and afraid it won’t survive convened a virtual situation room to devise a battle plan before drawing swords – not butter knives, as one business owner pointed out. Tuesday’s hour-long Zoom video conference was a call to arms for more than 25 restaurateurs, bar owners and other hospitality operators. They were mostly men from Auckland.

They rallied behind a strategy aimed at capturing the government’s attention and winning over the public’s sympathy. Their plan? Withhold GST payments and refuse to reopen in a tougher alert level two environment, all in the hope of securing better, targeted financial support from the government to keep serving customers.

Auckland, the economic engine room of New Zealand, remains at level four, with the rest of the country operating in delta level two since midnight Wednesday. Under level two, more than 50 people are allowed to wine and dine inside venues, while up to 100 people are permitted outdoors. Bars and nightclubs can open provided they offer only seated service. Dance floors are closed. Cinemas, stadiums and other events and entertainment operators are similarly restricted.

Customers must keep a metre away from one another, wear face masks when they’re not eating or drinking, and remain seated unless entering or leaving venue, using the bathroom or paying for meals. Staff, however, must wear face coverings at all times and keep their distance. Signing in for record keeping is still required.

Level two is nothing more than level three dressed up in disguise, according to many in the group. And the financial help on offer must match, “because it’s not fair to call this level two ‘level two’ when, in effect, it’s level three”, said Ofir Yudilevich, the owner of Auckland whisky bar The Jefferson. “We don’t have any negotiating power with the banks and the landlords, and the public aren’t there to say ‘hey, we’re still at level three, there are still restrictions and therefore we’d like you to do the right thing’.”

Shaky Isles Coffee owner Sam Ansley said level two was the worst of all worlds. “It’s an environment where you don’t get government support, you don’t get supply support, bank support or landlord support and the staff have had a guts full of you as well.” Receiving the resurgence support payment each week, rather than a lump sum, to cover fixed costs would better help businesses, Ansley said. So too would extending the wage subsidy scheme beyond levels three and four.

READ:  ‘How do you spell hongi?’ 26 hours in Queenstown with ScoMo and Jacinda

Some business owners were conscious that level one wouldn’t be the same either. Mandy Lusk, co-owner of Fort St’s Vivace restaurant, said the latest lockdown would be neither the first nor the last under the delta levels. “We need to fight from the very beginning for that targeted alert level assistance at every level. It needs to be different to businesses that can work from home.”

The hospitality sector employed 170,000 people in pre-Covid times, and contributed $6 billion to New Zealand’s GDP. It also connects people, forging experiences, creating memories. In tough times, though, the sector has been a “whipping boy”, Ansley said. “But, you know, no woe is me.”

Leo Molloy, the owner of Auckland Viaduct bar Headquarters, described hospitality as a punching bag. “And the reason you’re a punching bag is because you roll over and take it, and you don’t need to.” It was Molloy, the bad boy of Auckland’s hospitality scene, who suggested withholding GST payments until level one was reached. He claimed businesses should have the right to opt in and out of levels two and three, and that existing support should better reflect commercial reality.

The group was hyper aware of the need to get the public on its side, to show how hard it was taking one for the team of five million. But boosting the bottom line couldn’t come across as their motivation, said Luke Dallow, owner of Ponsonby Rd restaurant and bar Midnight Gardener. “It’s not about profiteering as a group. It’s definitely not about profiteering. It’s more about securing what we’ve got and it’s all about surviving.” 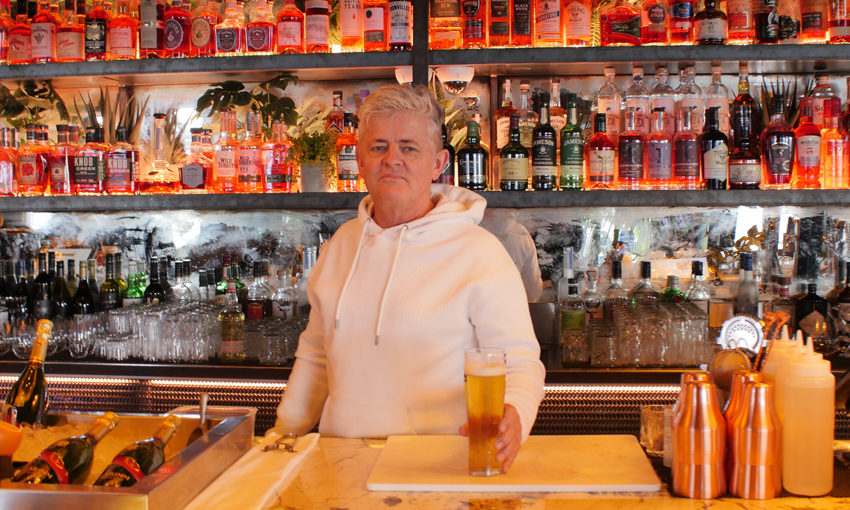 Lobby groups Hospitality New Zealand and Restaurant Association of New Zealand were quizzed about whether they’ve actually been effective. Dallow, who didn’t “want to be rude about this”, said they had had a year to make a difference for those on the frontline, “and we’re just not really seeing the government responding to industry associations, or doesn’t appear to be”. The Restaurant Association was looped into various upper-level discussions, and general manager Nicola Waldren said it was important members continued to pass through information so the association could speak with their voice, and that “it would look a lot worse if we weren’t feeding that through”.

READ:  What To Make Of National Making A Fool Of Itself Over Demands For “Tactile” Democracy – And Its Subsequent, Spurious Suspension Suggestion

Dallow said the lobby groups should stand up to the government “with a bloody sword, and not a butter knife”.

Hospitality New Zealand chief executive Julie White assured the group that while the government didn’t have the appetite in 2020 to offer specific support to the sector, the tide had turned. She said she had secured a meeting this Friday with finance minister Grant Robertson. The Jefferson’s Yudilevich said it was too late.

“While you’re saying to us that you’re in touch with them and you’re giving them all this information, they don’t give a fuck. They just don’t take it in and they’re allowing this to happen and so to go back to them now and to say ‘hey, look at what you’re doing’, [it] is too late,” he said. “I actually think that we’ve been too soft.”

Dallow agreed, saying the sector must fight back. “We are a bit like a dog on our back with our hands up going ‘oh, give me a little cuddle, give me a wage subsidy, give me this, give me that’. So, let’s get aggressive. Let’s get our teeth out.” White, who had HNZ’s public relations team on the call, said it was important everyone sang from the same songbook, otherwise discord would halt progress. “What the government loves [is] a fractured industry and that’s what we can’t go with. We actually have to be really strong and really united because they’ll just cherry-pick us off.”

At level four, members’ revenue fell 98%, and dropped between 40% and 60% at level three. Many businesses have been barred from earning any income for a quarter of the last 459 days, and then restricted to earning no more than half their income for a further 76 days. “It does not add up in the eyes of the industry,” said Restaurant Association chief executive Marisa Bidois. “The cold hard facts of the matter are that we will see a huge number of business closures putting thousands of people out of work if this industry is not offered something to help it get through these enforced closure periods.”

READ:  Why the same mid-market EV costs over 50% more in New Zealand

Minutes before Tuesday’s Zoom call ended, Parnell Business Association general manager Cheryl Adamson described the delta level two restrictions as “totally unworkable” for business owners. Last year was tough enough, she said, and far fewer outlets this time around would keep persevering. “If the rules announced for the rest of the country are what the Auckland hospitality sector has to look forward to in coming weeks, we’re going to see many more outlets shut up shop and become forced out of business.”

Mike Jennings, whose Front Row Hospitality group runs a number of Auckland bars including Mission Bay’s De Fontein and Grey Lynn’s Malt Public House, said many business owners would be losing sleep over the next impending monthly rent deadline and landlords have responded inconsistently. “It used to be a bit of a joke that level three was like level four. Now the joke is that any level above one is like level four,” Jennings said. “While they impose more restrictions, the government needs to look at targeted assistance for hospitality or else the beginning of October will arrive and many will start to default on leases.”

The reaction to reopening elsewhere in New Zealand has been a mix of resignation, gratitude and concern. Christchurch’s Madam Kwong restaurant co-owner Vivienne Wong said her business wouldn’t profit under level two but it had to reopen, otherwise staff might leave before things returned to normal. Wong said a skeleton crew, extended opening hours and continued takeaways would try to make up lost revenue. Wellington restaurateur Asher Boote, of Hillside Kitchen and Daisy’s, was grateful he could reopen and serve people, even if there were fewer customers, but still expected reduced revenue across the capital. Hamilton’s John Lawrenson, of hospitality business Lawrenson Group, whose businesses include a steakhouse and a nightclub, said level two was the worst of all worlds – comments that echoed Ansley’s. Lawrenson preferred level three as he could access the wage subsidy for his employees. Level two just left his businesses “hamstrung”.

Back in Auckland, those on the Zoom call summarised action points, agreed soundbites and wanted participating media to know the sector wanted New Zealand to make it out the other side safely and intact. Dallow then asked journalists to leave the call. The generals continued their discussions behind virtually closed doors.