A Christchurch TV crew confronted a logistical nightmare to create two hours of live television for children during New Zealand’s level four lockdown. How’d they make it happen?“Things are a little bit strange,” says What Now host Erin Wells. She’s sitting on a giant pink couch in her dressing gown with two party hats on […]

“Things are a little bit strange,” says What Now host Erin Wells. She’s sitting on a giant pink couch in her dressing gown with two party hats on her left, and soft toys and fluffy pillows stacked on her right. It’s the opening moments of a What Now episode like no other, beaming live from her lounge in a Christchurch flat. “You’re going to have to bear with us,” she tells an audience of thousands of Kiwi kids. “This camera that you’re seeing, there’s no one behind it.”

Five minutes earlier, at 7.55am, on Sunday, August 22, Adam Percival was at home too, staring at a monitor wondering if he’d bitten off more than he could chew. The former What Now host, who recently took over as producer, had made a brave call earlier that week. Despite the country entering a level four lockdown, he and the rest of the show’s 40-strong crew decided they wanted their live episodes to continue. 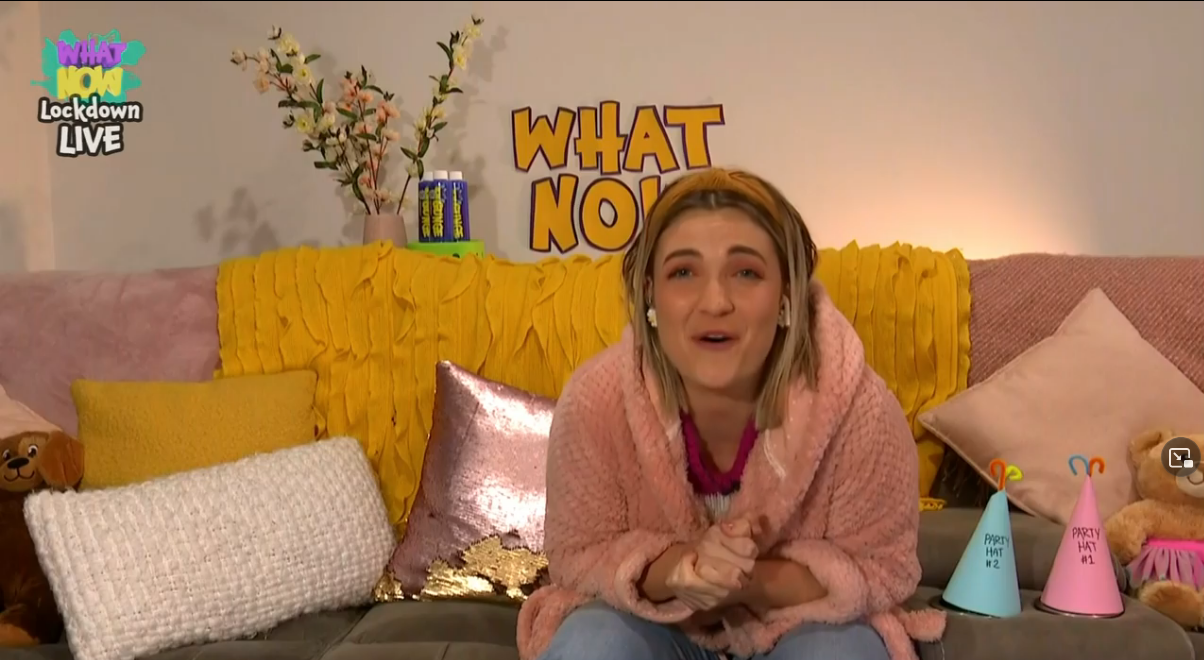 Erin Wells welcomes What Now viewers from her flat couch (Photo: What Now)

“The beauty of What Now is when it’s live, just so we can be there on a Sunday morning for the tamariki of New Zealand,” says Percival. The show, aimed at 8-10 year-olds, involves constant interaction with viewers, including web chats, games and competitions, so it has to be conducted live to make it all work. “It was an instant decision,” he says. “It was a bit of a no-brainer.”

The show’s crew could have pre-taped the episode, as they did during last year’s lockdowns. This time, they changed their mind. Percival says it would have cheated viewers out of a comfort they need right now. He grew up as a massive fan of What Now, and it’s played a major role in his life. “I remember that feeling that What Now gave me on a Sunday morning,” he says. “It was that friend… that voice and the people that would tell you, ‘Hey, everything’s OK.’”

On a normal Sunday morning, What Now’s staff cram themselves into a purpose-built studio in the Christchurch suburb of Addington. Airing every Sunday from 8am for two hours, the classic kids show retains the same kind of manic energy it had when it first started in 1981, turning hosts like Steve Parr and Jason Gunn, who owns Whitebait, the studio that makes What Now these days, into household names.

To pull it all together, staff collaborate in a small space. Hosts Erin Wells and Joseph Coughlan leap around the studio while crossing to Stella Maris, the show’s third co-host and “gunge runner” who interviews kids while visiting different parts of the country. Behind the scenes, it’s just as hectic. “It gets a little bit crazy at times,” says Percival. “We all work very closely together, sometimes on top of each other.” During level four, none of this is possible. Unlike news shows, What Now isn’t considered to be an essential service. To produce the show live means What Now’s entire team would be forced to work while isolated at home. They didn’t know if they could do it. They didn’t even know if it was possible. “The tech team was apprehensive,” admits Percival.

During a dummy run on the Friday after lockdown was announced, the feed “dropped out”. If that happened on Sunday, the broadcast would be cut and TVNZ would replace What Now with a generic movie re-run. In other words, a complete fail. “We were so close to calling it quits,” says Percival. “But I guess there was a bit of adrenaline with what we were doing. Part of us just wanted to see if it did work.”

So they got busy. From their own bubble, co-hosts Wells and Maris cut the words ‘What Now’ out of coloured card and taped it to their lounge wall. They set up a take-home camera and tripod, the prize wheel, and made party hats. At his parents’ house, Coughlan found some of his old toys, including a Star Wars X-Wing ship, a teddy bear, and a Batman pillow, and positioned them within his camera frame. Then he blew up a bunch of party balloons. “It was amazing how they still managed to make their houses look a little bit like it could be What Now,” says Percival. 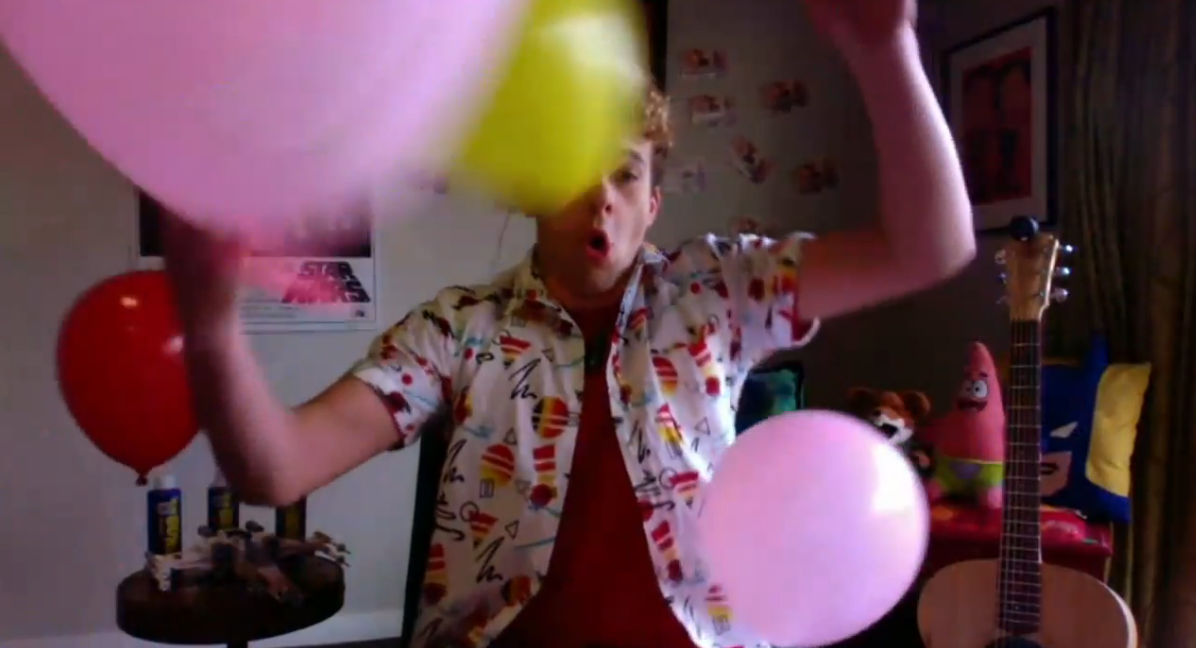 Things were equally DIY behind-the-scenes. The show would need to be cobbled together from eight separate locations. Sound operator Ash McKenzie set up a bank of screens, mixers and speakers, then pulled the curtains. Director’s assistant Shardey Harris balanced three laptops on her dresser, then grabbed all the stopwatches in the house to help time the show’s ad breaks. She found five, plus a blue calculator she nestled into a sock drawer. 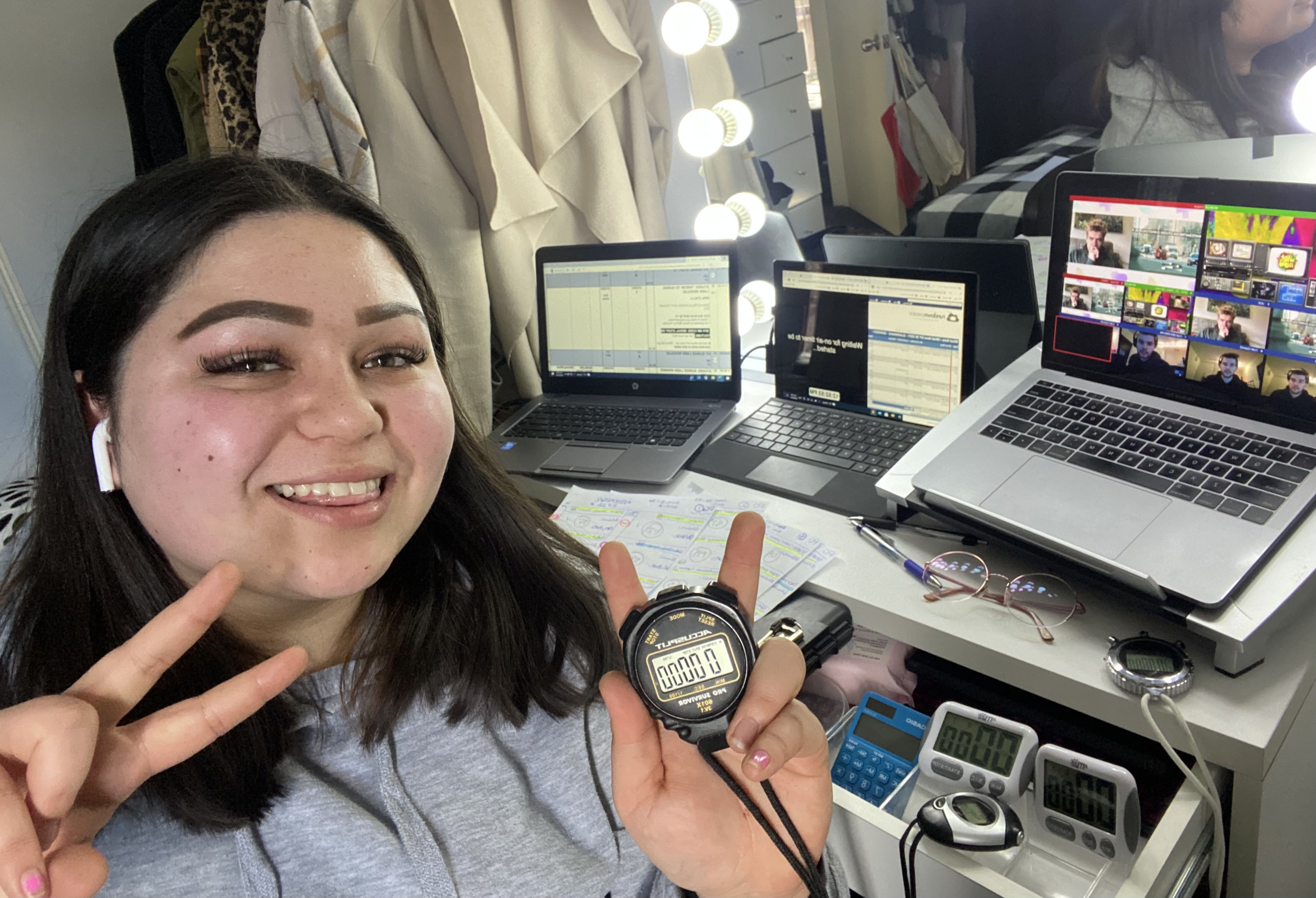 Shardey Harris in her bedroom office. (Photo: What Now)

Kerry DuPont, the show’s director, had the most extreme setup of all. For Zoom calls during last year’s lockdowns, his two children, aged two and four, would interrupt their dad with high-pitched squeals and door slams. That wouldn’t work under the white hot intensity of conducting two hours of live television. So he made the call to set up a temporary studio in his 2005 Toyota Allex, which was parked outside in his driveway. “It was a first,” he says.

DuPont fed an extension cord and network cable out of his kitchen window and into the car. He folded down the front passenger seat, balanced a computer monitor on top, and set up a four-plug power outlet on the central console. Then he perched himself in the back. DuPont planned to switch between a Macbook, a Stream Deck and the monitor to conduct the show, something that would later give him a neck ache.

READ:  Like We’ve Been Here Before: The “Friends” Reunion. Kerry DuPont in his home office, a 2005 Toyota Allex. (Photo: What Now)

But he hadn’t factored in the Christchurch chill, so he returned inside to layer up with two jackets and a beanie. As live time loomed, he could see his kids through the kitchen door, turning on the TV so they could watch What Now. Occasionally they’d run over to bang on the door and bellow, “Hi Dad!”, oblivious to the fact it was all hinging on DuPont, his car-based office with its precariously balanced screens and an intricate network of home-based staff members. An Instagram clip showed just how it was done – including McKenzie balancing a baby on his knee as he edited the sound.

Percival was stuck at home too. As he counted down to 8am, he crossed his fingers that the show would come together. “Sometimes you turn the TV on and you don’t realise the amount of work that goes into making a piece of content,” Percival says. This was different. Many late nights and lengthy Zoom calls had gone into making this particular episode come to life.

At 8am, What Now went live with a show unlike any other in its 40-year history. No one knew if it was going to work. “We just decided we’d go for it,” says Percival. Ash McKenzie works on the show’s sound. (Photo: What Now)

From her pink couch, Wells starts the show solo. After a few moments, she introduces Maris, her enthusiastic co-host who is usually out travelling around New Zealand, interacting with fans. This time, she was Wells’ “bubble buddy” and they were sitting side-by-side. They cross live to Coughlan, who throws his balloons up in the air and says: “It’s a party! No, it’s just me.”

Afterwards, an AirPod falls out of Maris’ ear and onto her lap. “We only had one set of AirPods,” she says. “I had to put the right AirPod in my left ear and it wasn’t having a bar of it.”

The pair had been working towards this moment for days. Under guidance from other staff members via Zoom, they took on multiple duties, learning how to operate a live camera, complete each other’s make-up, dress a set, handle lighting and style each other. “The camera was the funniest – that thing gets really heavy,” says Wells, who says her arms would start shaking over time. Maris agrees: “If you’re expecting a full blown professional show and you have two people who don’t usually do all that technical stuff, it’s a bit far-fetched.”

READ:  Who are the hidden celebs on The Masked Singer NZ? We decipher the clues Joseph Coughlan meets a What Now fan via Zoom. (Photo: What Now)

To everyone’s surprise, the show was going well, and it kept improving. There were no dropouts, no major clangers. Aside from a few early timing issues, the episode plays out surprisingly smoothly. The trio of hosts cross to each other with ease, delivering birthday shout outs, showing off blanket forts and spinning the prize wheel to give away toys and vouchers. At one point, Coughlan asks kids what they’re doing to pass the time during lockdown. “I’m annoying my siblings,” admits Leah, 9, from Napier.

“It was a weird sort of exciting challenge,” says Wells. “How do we make this work?” If there were mistakes, Maris says they made them part of the show. “It’s just something to laugh at,” she says. “I think those parts are funny. The best parts are when things go wrong. It’s always good to be thrown out of your comfort zone.” Wells: “If you make it part of the show, then there’s nothing wrong with it.” 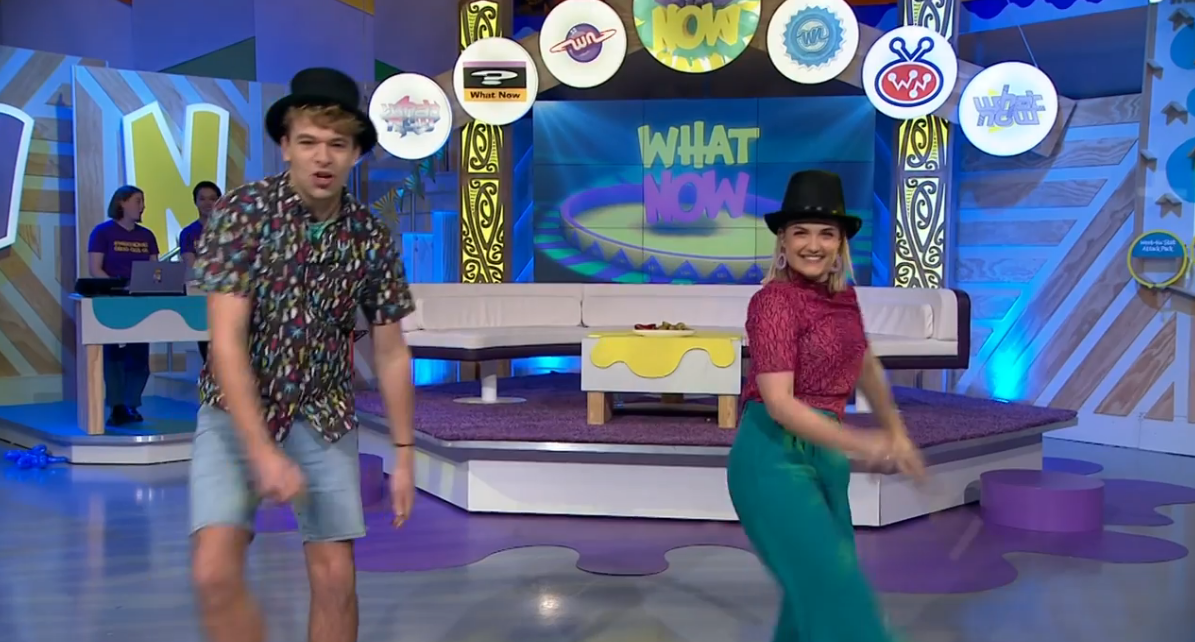 On a typical Sunday, What Now’s hosts broadcast from an Addington studio. During lockdown, that’s not possible. (Screengrab: What Now)

At 10am, when the show was over, major celebrations ensued. “Everyone was jumping up and down, just amazed that it all came off,” says Percival. No one suspected the chaos unfolding behind the scenes. “The crazy thing is if you watched What Now on Sunday morning you’d never have thought there was a big beast behind it all. It was a What Now classic – it was pretty insane.”

Helping viewers was the aim, yet Maris says the show impacted in another way, serving as a distraction for those working on it too. Putting the episode together helped What Now’s team forget about the delta-related dramas of the outside world. “Our lives get consumed by this show,” she says. “You don’t really know what (kids) are going through. When you have an element of normality, a chance to forget about it for two hours, that’s so powerful,” she says. “It can’t be underestimated how much you having a laugh can affect them.” Stella Maris spins What Now’s prize wheel in front of her flat kitchen. (Photo: What Now)

During lockdown, Percival believes that matters more than ever. “It gives you that escapism that you need at a time like this, especially when we don’t have the answers to the big questions that are happening in the world right now.” Seeing hosts stuck at home, just like viewers are, is a bonding experience. “It’s just trying to make sure our audience feels like, ‘Hey, we’re all in this together.'” DuPont agrees. “It was exhilarating (and) exhausting,” he says. “It was that feeling of, ‘We can’t believe we’ve just done that.’ You’re just like, ‘Wow, what’s next?’”

What’s next is that they’ll have to do it all again this coming Sunday. Whatever happens with Christchurch’s alert levels, the What Now team won’t have time to move back into its studio. So they’ll all be in their bedrooms, isolated at home – except for Dupont. “All going to plan I’ll be in the car again,” he says. “Beanie on, two jackets, sweatshirt, making it all happen.”

What Now airs on Sundays on TVNZ 2 at 8am, and can be streamed via TVNZ OnDemand.