This was no ordinary heavy rain event. Paul Gorman gets a rare insight into events in the MetService forecast room ahead of the torrential Canterbury rainstorms.Failure was not an option.Cantabrians were directly in the firing line of a deepening low-pressure system that was about to bring catastrophic flooding. MetService weather forecasters realised something extraordinary was […]

This was no ordinary heavy rain event. Paul Gorman gets a rare insight into events in the MetService forecast room ahead of the torrential Canterbury rainstorms.

Failure was not an option.

Cantabrians were directly in the firing line of a deepening low-pressure system that was about to bring catastrophic flooding. MetService weather forecasters realised something extraordinary was happening. And they knew they had to get this forecast spot on.

Adrenaline was pumping and the forecast room crackled with energy up at MetService’s Kelburn headquarters, above central Wellington. In the middle of it all were the severe-weather meteorologists, whose job it is to help save lives and livelihoods when the worst of weather is heading New Zealand’s way.

The pressure on their shoulders to make the right call on the situation was immense. This was no ordinary heavy rain event. Early on, it was clear lives depended on this forecast. It’s no exaggeration to say it was one of the most important predictions in MetService’s nearly 30-year history.

The decision to issue a rare, top-level, red severe-weather warning for torrential and flooding rain in Canterbury carried with it the reputation of MetService.

THIS WAS “LIFE-AND-DEATH WEATHER”. PHOTO: SUPPLIED

Despite huge advances in technology in recent decades, weather forecasting remains an inexact science. After all, how could anyone know with 100% certainty exactly what the weather is going do?

Weather forecasters juggle a vast amount of data – including observations from the surface to the top of the atmosphere, radar and satellite images, and a range of highly accurate computer models from around the world – to predict whether there will be showers at your place this afternoon.

Each computer model they look at will have differences, even if the broad picture of where the weather systems and fronts will be this time tomorrow or next week is about the same. Forecasters use their expertise to determine which nuances are significant and which may be red herrings.

When it comes to heavy rain and heavy snow, severe gales and severe thunderstorms, MetService is the agency authorised by the government to issue warnings.

In mid-2019, a two-tier warning system was introduced, with orange warnings for severe weather with the potential to affect people, animals and property, and a new red warning category, reserved for life-threatening events, when extreme disruption is likely and “immediate action” needs to be taken to protect life.

The red warning for heavy, persistent rain for parts of Canterbury from 29 to 31 May was just the second issued by MetService; the first was in February 2020 for heavy rain in Westland and Fiordland, when roads were washed out, trapping about 1000 people in Milford Sound, and rivers burst their banks, causing significant flooding in Southland.

At the end of May, as the rain poured down and the rivers rose across Mid- and South Canterbury, and communities were evacuated as a regional state of emergency was declared, the issuing of a red severe warning was fully justified. 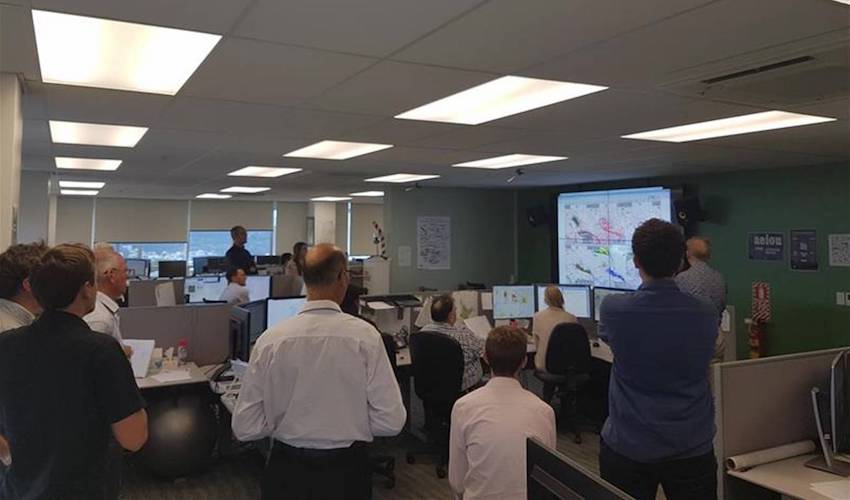 The Wellington forecast room where the crucial call was made. Photo: Supplied

MetService head of weather communications Lisa Murray was, ironically, attending the National Emergency Management Conference at Te Papa in Wellington on the morning of Thursday May 27. “I got a call from my team about 11am after the [computer] weather model discussion on Thursday morning, saying: ‘Lisa, you might want to come back up to the office. The models are starting to come together and it’s looking like it might be a very big event.’

“Lewis [Ferris] and Angus [Hines] know when they call me in it has to be a significant event. ‘We’re considering a red warning,’ they said. They didn’t need to say anything else.”

Ferris, a communications meteorologist, says by then there was enough consistency in the models to be worried about potential impacts for parts of the eastern South Island on Sunday. “While we didn’t know exactly where was going to be hit hardest, the dry soils and the atmospheric situation were prime ingredients for a busy weather weekend, so we needed to call in more media-trained meteorologists.”

MetService meteorologists have two morning map discussions, at 8.40am and 9.50am, to consider how the weather will pan out today and tomorrow. That Thursday morning, as heavy rain and flooding was looking increasingly likely in Canterbury from Saturday through to Monday, the forecast team issued a yellow severe-weather watch, highlighting that a significant event was on the way, and indicating that warnings would soon be issued.

On the morning of Friday May 28, about 30 hours out from the start of the heaviest rain, the atmosphere in the forecast room was electric.

Hines, a broadcast meteorologist, recalls when the pieces of the atmospheric puzzle clicked together. “By Friday, the certainty had grown in the forecast room that this was going to a really serious and damaging weather event. So Lisa gave the go ahead for our team’s crisis weather communication plan to be activated so that safety messages could be given early and clearly to the general public.”

Murray says while the global and MetService weather models were not “in exact alignment”, all now indicated heavy rain for a prolonged period in Canterbury. “It was the expert meteorologists in the forecasting centre who used their extensive experience of these types of large impactful events to elevate the event to a red warning. These are only issued in consultation with the relevant regional council hydrologist, in this instance at Environment Canterbury, and also NEMA (the National Emergency Management Agency) were consulted.” 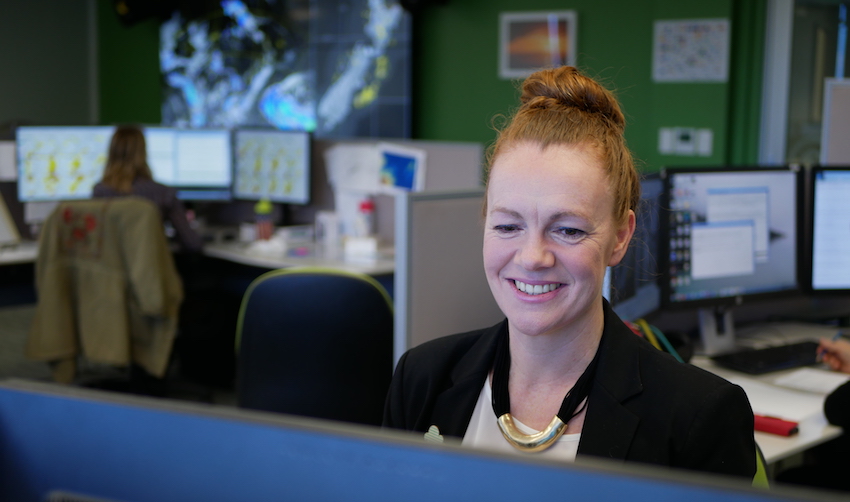 Once the red warning was issued, Murray led the communications team through the four-day event, with extra support also brought into the forecast room to assist with severe weather, marine, aviation and public forecasting. Video forecasts were updated through the weekend to get the message to the widest possible audience. “The energy changes with these really severe weather events,” Murray says. “It’s not just day-to-day weather, it’s life-and-death weather.

“In terms of the scale and breadth of the impacts for Kiwis, this is right up there with the severest weather events our team has seen.”

After the warning was released, Canterbury councils and regional civil defence staff were briefed on the severity of the situation, Murray says. “At that stage, South Canterbury was our main concern, where the first rain would start to fall.

“A red warning is not something to be done lightly. And putting out a red warning is saying we are expecting flooding, rivers to breach their banks and there could be a state of emergency.”

“Dangerous river conditions and flooding are expected. Slips and floodwaters are likely to disrupt travel, making some roads impassable and possibly isolating communities.” 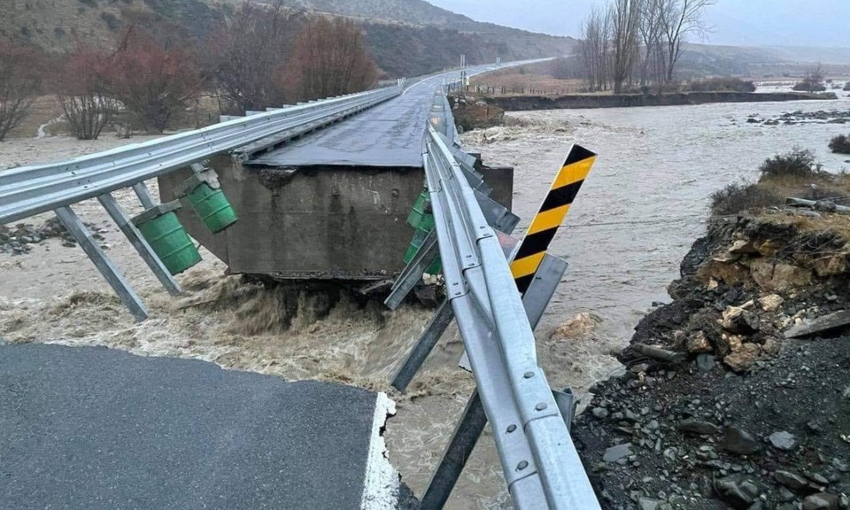 Flooding at Porters Pass as a result of the torrential rainfall in May. Photo: Radio NZ

Head forecaster Philip Duncan says he was able to trust the artificial intelligence behind IBM’s supercomputer “Watson”, which crunches all the reliable global rainfall modelling and also factors in how local terrain can affect incoming weather and how past similar weather events unfolded. “So when we started seeing incredible 48-hour rainfall totals of near 250mm in places like Mt Somers/Mt Hutt, we knew we could trust those figures. Had they been from any other single model source, we’d have been far more sceptical that it was truly understanding the local geography.

“The physical look of this large low painted a very clear picture to WeatherWatch, with an atmospheric river of sub-tropical moisture from near Fiji and Tonga converging with other airflows like a several-lane motorway and bottlenecking into one lane right over Canterbury, and made even worse by the blocking nature of the Southern Alps.”

It had all the hallmarks of being a slow-moving, heavy rain event with high flood-risk potential in one region only, he says. “Put those two factors together and we had strong confidence to specifically headline the word ‘flood’, which we don’t often do.”

Both the MetService’s red warning and WeatherWatch’s flood forecast hit the nail on the head in terms of where the heaviest rain would fall and the roughly 48-hour duration of the event.

By the time the rain-bearing clouds finally thinned over sodden Canterbury late on Monday 31 May, most places had recorded between 100mm and 200mm of rain. Several weather stations in the Canterbury High Country recorded more than 300mm, with one station receiving more than half a metre of rain during the event.

Murray says the red warning “went very much according to what was expected from such an event”.

“We back our science. You don’t put out a really big statement like this without some good science behind it.”

While weather forecasters always pride themselves on getting it right, some predictions matter much, much more than others. In a situation like this, a mistake would have been simply unthinkable.