What does it feel like, feel like, feel like underneath the mask? Sam Brooks got into the Pavlova costume from The Masked Singer to find out.I can’t say I’ve ever felt truly flirty, 30 or thriving. That is, until I became a pavlova. Not just any pavlova, but a pavlova that has been delivering deeply […]

I can’t say I’ve ever felt truly flirty, 30 or thriving. That is, until I became a pavlova. Not just any pavlova, but a pavlova that has been delivering deeply confusing performances of songs such as ‘Shake It Off’ and ‘Sex on Fire’ on The Masked Singer NZ, Three’s new mystery celebrity singing show.

From the jump, the Pavlova has been the character that’s intrigued me the most. She’s a baked good, the only inanimate object in the cast, but still gendered for some reason. She also has heavy-lidded eyelashes that remind me of a cabaret singer. Meringue Dietrich, if you will. When you look into her black sequin eyes, she stares, unflinching, back at you. What’s beneath the mask: strawberry seeds and whipped cream… or secrets?

So, when my colleague suggested I test drive one of the costumes from The Masked Singer, I knew immediately which to choose: I’d be getting into that pavlova. She’s got a secret, and she’s not telling.

The costume is made up of several sections. There’s the bottom, which serves as a sort of cake stand. There’s the body of the pav, which is a lightweight pink fabric, decorated with strawberries, hearts and kiwifruit slices. A detail that unnerves me are the red, elbow-length gloves – what is the pavlova grasping at? What does she want? Finally, there’s the pièce de résistance: the head, a large strawberry with those come-hither Bette Davis eyes.

Everything is covered in sequins. If we have a sequin shortage in this country, look no further than this one pavlova. The sequins say one thing to curious onlookers: I am not made to be eaten. I am made to be looked at.

My first step: To get inside The Pavlova. The next? To become her. 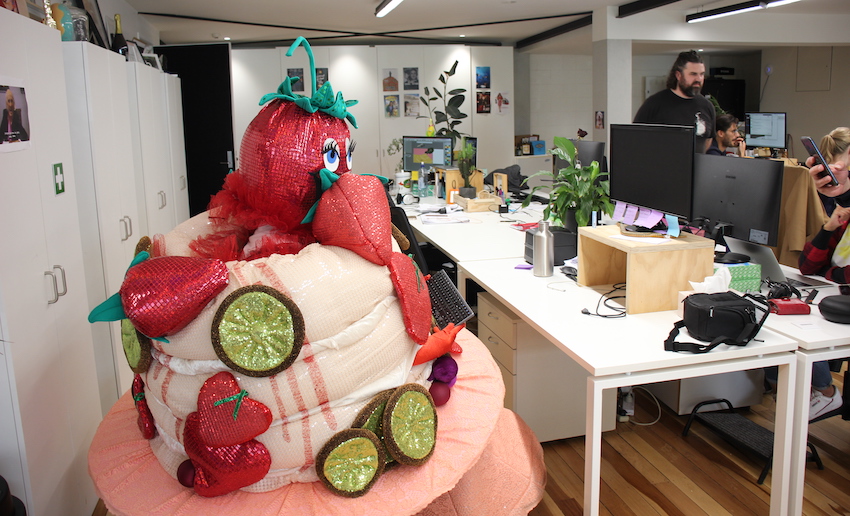 The Pavlova, hard at work.

One needs help to get inside the Pavlova. Thankfully, I had an office half-full of colleagues willing to help enable this bizarre desire of mine. The other half? Keen to watch, but not to help. Once you help a grown man get inside an oversized baked good, you can’t undo that. At some point, you should expect a threatening email, perhaps with the above photo attached, saying: “I know what you did last autumn, and I need to know: why?”

The hardest bit to put on is the body section. It’s kept in place with a harness within the Pav that you have to buckle yourself into. It’s heavier than say, a large coat, but perhaps less heavy than you expect a human-sized cake to be. Once you’re in it, you’re in it. And it’s more comfortable than it looks. Other than the arm-holes, which you have to squeeze your gloved limbs through, it’s actually rather pleasant. Like a prettier, less convenient weighted blanket.

You can’t put the head on without help. Your arms might be showing in this costume, but they’re now for fashion, not function. Thankfully, I had several people willing to put the head on me, and also take it off: it does get quite hot in there.

When the head is on, I find myself looking out the netting of the mouth. The mouth is the window to your sight, as far as the Pavlova is concerned. I feel compelled to joke “My eyes are down here, boys.” But they’re not. Pav’s eyes are now up there, and they are clearly baking up strawberry schemes. I think to myself, “It’s hard to be a pavlova.” As my colleagues take the head off and on, I reconsider that thought.

It’s hard to become a pavlova. 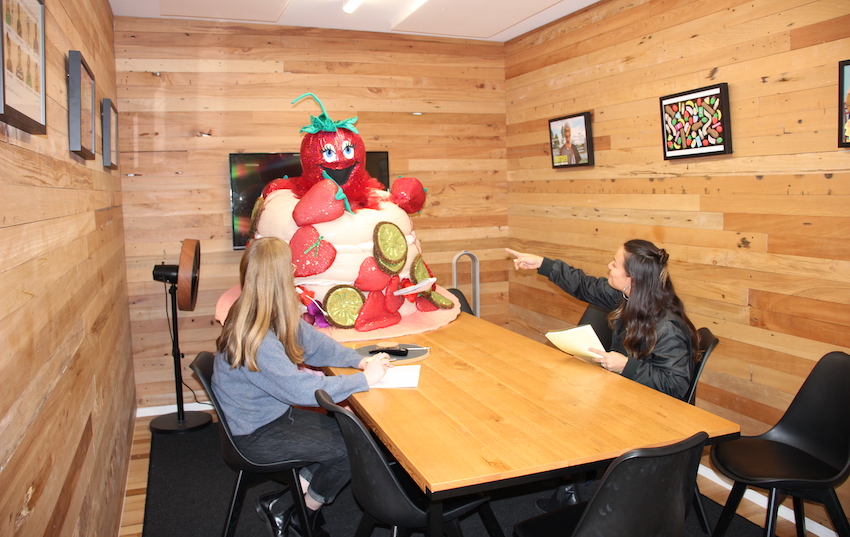 It’s not the easiest outfit to move around in. In fairness, that probably accurately reflects the experience of being a pavlova: it is delicate meringue after all. Within the pav you are immobile, cumbersome, stared at by people who might not eat you immediately, but could easily change their mind after a couple of wines with dinner. Nobody ever needs to eat a pavlova, but if it’s around and it’s edible… who knows.

There is a strange ignobility to being completely encased in a costume. I pivot and waddle around the office, seeing my coworkers look above my real eyes and into those black sequins. I know that they know it’s me underneath there. They saw me get into it. I announced it to the whole office. But I hope for one moment they forget it’s me. Right now I am not a journalist; I am a beloved baked good that is annoyingly difficult to get right, but thankfully easy to purchase from your local supermarket.

This reality comes crashing down when I find myself pensively looking outside the office window, because that’s where I’ve asked to be placed. In a moment of serendipity, I see a celebrity walk by. READ:  After midnight: waiting for hot chips at Tipene’s Takeaways Again, for journalism, zoom and ENHANCE! Why, it’s the Orange Roughy himself, Mike McRoberts, having a stroll past the window. I wave, as much as the pavlova lets me, which is not a lot. He doesn’t see me. My eyes are up here, boys.

As he walks away from my sequin gaze, I realise I could be anyone under here. I could be his fellow contestant, still in the competition, vying for the winner’s prize (I have no idea what the winner’s prize is). I could be fellow news anchor Samantha Hayes, for some reason visiting The Spinoff office. Or, I could simply be a man in a pavlova costume, living out a dream he has had for a little over a month. It doesn’t matter. He doesn’t look up at the window. But still I think: for one moment I could have beguiled and befuddled Mike McRoberts. That’s the power of the Pav.

I take the costume off shortly after. I finish up my day at work. I have a wine, have some chips, and go to a gig. Friends, acquaintances, and enemies recognise me. I go to bed, and I wake up the next morning, a man and not a baked good. I feel deflated, not unlike a day-old Pav. I realise that you are allowed to be someone else entirely when you’re in a full body costume. Even actors have their faces, their limbs, their voices. In the Pav you can be another being entirely, allowed to completely forget yourself. You could be anything, anything, anything, underneath the mask.

A day later, I realise that I actually have taken something of Pav into my life. I perch quietly at the Mexican Cafe, hand clasped around a frozen margarita. My friend chows down on a chimichanga. I am bringing nothing to the table, conversationally. Normally, this would worry me; now, it doesn’t. I simply am, sitting in my non-sequinned finery, looking out pensively over the world with my squishy human eyeballs. Like the pavlova, I don’t need to try to be anything I’m not. I am a staple of New Zealand culture and cuisine. I am to be baked, loved, and devoured.

Even so, one question haunts me: Am I a man who had dreamed he was a pavlova, or a pavlova dreaming she was a man?

READ:  Facebook’s slow-motion reckoning is about much more than one company