Worrying accounts of interactions with mental health services are reaching tens of thousands on TikTok, as young New Zealanders shine a light on a broken system.Warning: This piece includes reference to suicide.A small colony of ants crawls over a toothbrush into a grime-covered sink. Dark splotches resembling black mould grow in the corners of the […]

Worrying accounts of interactions with mental health services are reaching tens of thousands on TikTok, as young New Zealanders shine a light on a broken system.

A small colony of ants crawls over a toothbrush into a grime-covered sink. Dark splotches resembling black mould grow in the corners of the ceiling. Mysterious stains splatter across the linoleum floor.

“This is a video of an ant-infested bathroom in a public mental health unit in New Zealand,” writes a frustrated patient.

Shocki“Would you want yourself or your loved one to be admitted to somewhere like this?”

An anonymous user has gone viral on the social media platform TikTok through documenting their experience at a New Zealand mental health facility over the past month. The user, who goes by the pseudonym @fullmoon.nightshift, has garnered over 177,900 views across eight videos on the account.

The videos, showing everything from an unclean bathroom to an occupational therapy room covered in “disturbing artwork”, serve as a bleak reminder of the current state of New Zealand’s mental health system. The posts have been met with similar sentiments shared amongst commenters: “The biggest thing I learned in my mental health journey is that I cannot rely on the system to help me,” responded one viewer.

The anonymous creator confirmed in a comment that the facility was Hillmorton Hospital in Christchurch, which in July was called “one of New Zealand’s worst mental health hospitals”, with Stuff reporting that almost a third of staff resigned in 2021 amid what the nurses union said were serious staffing and safety issues. Screengrabs from videos shared by @fullmoon.nightshift on TikTok

Other videos on the account document the patient’s daily life in the ward, with one showcasing the hospital’s outdoor exercise area, which has been compared by viewers to a “prison yard”: tall wire fences wrap around a small patch of grass as a camera pans to show graffiti-covered walls and worn-in wooden benches. “I’m posting this for awareness of the conditions us MH patients are faced with… I’m forever thankful for the ward and staff providing MH care but these conditions need to change!”

This account is just one of a growing number across social media platforms being used to share experiences of rejection, frustration and heartbreak from people who feel failed by the New Zealand mental health system, both within the private and public sector.

But why are people resorting to sharing their grievances on social media rather than directly to the providers of the services?

It’s a trend that isn’t surprising.

“[Social media] feels like a much safer place in regards to mental health than the real world…,” Bianca Tosh told me. “Just because there’s access to so many people around the world that are suffering or are facing the same things as you, so it’s comforting being less alone.”

Aucklander Tosh, 19, went viral on the same platform a few months ago when she posted a video asking for others to share their experiences with the national 1737 service – one of the multiple mental health helplines available in New Zealand, but the only government-funded service. The helpline was launched in 2017, funded by the Ministry of Health, designed to “fill the gaps” for people who felt like they couldn’t contact specialised helplines available, such as The Lowdown or The Suicide Crisis Line.

“I’ve reached out to it and not had a good experience, and I’ve talked to other people,” Tosh explained. “I hadn’t really talked to anyone who had had a really good experience with the number, so that just sparked my interest.”

The original video posted by Tosh has received over 127,000 views and 1,000-plus comments, many from people saying they had a similar experience with the service.

And the responses were heavy.

“I got told to man up because I’m an Islander,” wrote one user.

“They put me on hold for 2 hours then told me to call back when im not crying,” wrote another.

The sheer volume of responses was alarming enough to sift through, let alone the heartbreaking stories accompanying them.

“With my video I did say I had a negative interaction but I never asked for negative responses only – it was just so shocking to see so many people react, and to have the vast majority of them be negative,” Tosh told me. 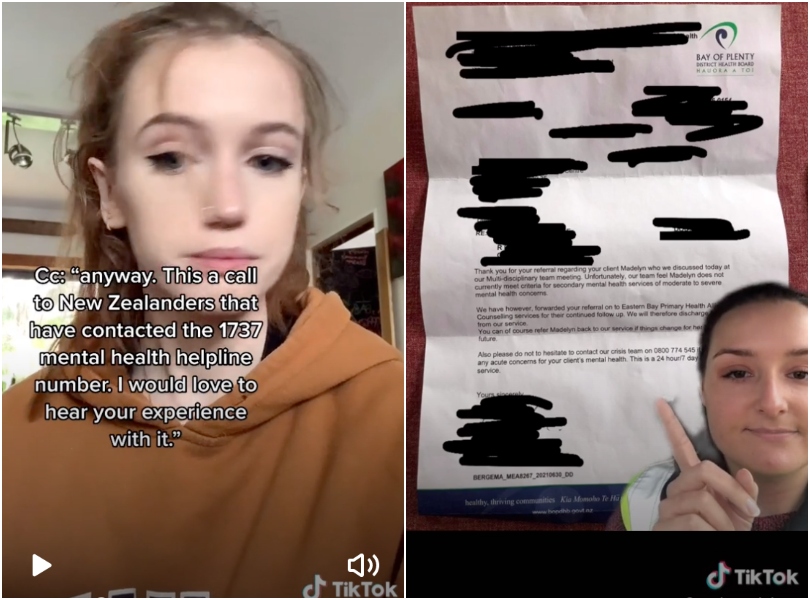 Like Tosh, Whitianga-based Grace Pene posted a video on TikTok expressing her frustration when her sister received a letter from the Bay of Plenty District Health Board. In the video, Pene explains how her sister, who struggles with depression and anxiety and has previously made attempts to take her own life, went to her GP to ask for help. The letter she received stated that her sister did not meet the criteria for enrolment in secondary mental health services.

“What the fuck does that even mean?” asks Pene in the minute-long clip. “You have someone right in front of you, asking for help, and she doesn’t meet the criteria.”

The video, originally posted to her account on June 12, has now more than 79.7k views and over 1,100 comments. While Pene put up the video initially out of frustration and to spread awareness, she didn’t expect it to garner such attention. “[My sister] feels like she’s just another cog in the machine that’s just going round and round and getting spat out at the end of it,” Pene said. The letter, she said, was the catalyst to starting her own local mental health support group in Whitianga after being dismayed by the lack of services available in her community.

Pene felt that sharing her story on social media was the only way she would be listened to. “In my experience, people are just sick and tired of getting turned away or turned down… If you put those videos out there, people can’t look away,” she explained.

“The more that people spread that awareness, I think, hopefully, the more the health system listens.”

It’s clear that social media has become more than a platform in terms of exposing the country’s mental health crisis – it’s being used as a tool to highlight the cracks of a mental health system that has failed its most vulnerable time and time again. But whether the government is listening remains unclear.

WHERE TO GET HELP

READ:  The Bulletin: What NZ needs to know about the delta cases

Free call or text 1737 any time for support from a trained counsellor.