At Ōrākei Marae, Māori cultural competency kaiako from Te Kaa are teaching rōpū from companies across Aotearoa how to positively identify with Māori culture.Read the te reo Māori version of this story here.On the famous whenua of Takaparawhau, the land is rich with stories of Aotearoa’s complicated history. Ōrākei Marae is just a short walk […]

At Ōrākei Marae, Māori cultural competency kaiako from Te Kaa are teaching rōpū from companies across Aotearoa how to positively identify with Māori culture.

Read the te reo Māori version of this story here.

On the famous whenua of Takaparawhau, the land is rich with stories of Aotearoa’s complicated history. Ōrākei Marae is just a short walk from the site of the Bastion Point occupation where, just over four decades ago, Māori fought for their land rights in a protest that lasted more than 500 days. On a sunny day in August, on the marae, a rōpū has gathered to learn just how important these stories are to their identity as New Zealanders, through a programme designed by a wahine who was born into that occupation.

The last of the winter cold has the manuhiri rugged up in the morning air, before the sun starts glistening off the Waitematā. By the time the pōwhiri starts, coats have been either draped over arms or taken back to the car.

At the entry to the marae ātea, a warrior raises his head and begins the wero. On the other side, Vodafone CEO Jason Paris (Ngāi Tahu) prepares to accept the taki at Ōrākei Marae, leading his group of Vodafone representatives through the process. For some, this experience is new and confronting. It’s the culmination of a five-day course called Te Kaa – Igniting your Māori Cultural Competency, held over the past five months and led by Maurea Consulting, an organisation founded by Precious Clark (Ngāti Whātua, Waikato, Te Uri o Hau, Ngāti Hē, Ngāti Pāoa and Pākehā). The programme is aimed at organisations and is designed to guide people towards positively identifying with Māori culture through learning about tikanga, reo and the rich history of Māori in New Zealand – and encourage them to consider Māori culture within business decision-making.

“Te Kaa is designed to give people access to the Māori world so that they can understand it enough to place it in their hearts, minds and puku. I find that when knowledge is placed in the puku it becomes a part of you and a part of your decision making,” Clark says.

It was while working and living overseas that Clark came to realise how underappreciated her culture was in Aotearoa.

“I went to London and my culture was globally hot, but I came back to New Zealand and it was locally not. I found that people around the world were really interested in it, and when you’re interested in something you’re less likely to destroy it, so coming back home I wanted to be a part of the shift that values Māori culture.”

When she returned to New Zealand Clark made it her mission to showcase the beauty of te ao Māori to the people already living here. She believes there’s a whole world to unlock if people are willing to learn about indigenous ways of life, and it’s a commitment more New Zealanders are making. Te reo Māori courses in secondary schools and universities have attracted record numbers of enrolments in recent years. It’s a testament to efforts to grow the numbers of te reo speakers by organisations like Te Rangaihi Reo Māori that are working towards a goal of one million reo Māori speakers by 2040.

Te Kaa has a similar goal: it wants 10,000 people to participate in its cultural competency course, and so far it has guided groups from some of New Zealand’s largest companies through the programme.

The course is broken down into five sections, each taking a day to cover and usually delivered at a company’s workplace before the final session at the Ōrākei Marae. The full day learning about Te Tiriti o Waitangi is one that often surprises the groups that take part.

“New Zealanders, whether they’re Māori, Pākehā, Asian, they’re looking for a place to belong here, and what they find is that the Treaty foresaw their arrival and actually provides them with that place,” says Clark.

The group from Vodafone New Zealand gathered here today comprises senior leaders from across the company, including Jason Paris, CEO, Thaigan Govender, head of mobile access network, and Emma Kelly (Ngāi Tahu and Ngāti Kahungunu), head of HR people experience. In his role Govender is responsible for building and maintaining mobile infrastructure such as cell towers for the Vodafone network. Because of this, his team has worked with iwi to consult on land use many times, but Te Kaa has emphasised the importance of this consultation. Govender grew up in an Indian family in apartheid South Africa and he says he’s come to understand the similarities between what he lived through and the experiences of Māori in Aotearoa. The stories told on the course by mana whenua like Clark, who was born during the occupation of Bastion Point, all explained the grim realities of colonisation in ways many of the rōpū hadn’t heard before.

“The leadership style of Māori and looking at the struggles that people have been through really resonated with me,” says Govender. “It got a lot deeper than I expected and from that point of view it drew a lot from me emotionally, because I was always anchored back to the aspect of struggle.”

The wānanga gave Kelly an opportunity to discover a lot about her place in te ao Māori, emphasising the reality that the challenges faced in Aotearoa are not shared equally. We can all play a part in addressing that, she says. Through Te Kaa, she became clearer on her role in helping create a workplace culture that’s not only accepting, but safer and prosperous for Māori employees.

“I’m in the people team, so the way I see our role is holding the space for people to go on their own learning journeys,” says Kelly. “It’s about creating the type of environment at Vodafone where we recognise the importance of that, and give people the space – not just the time out but the emotional and mental support – to be able to go on this journey in a way that’s really powerful.” 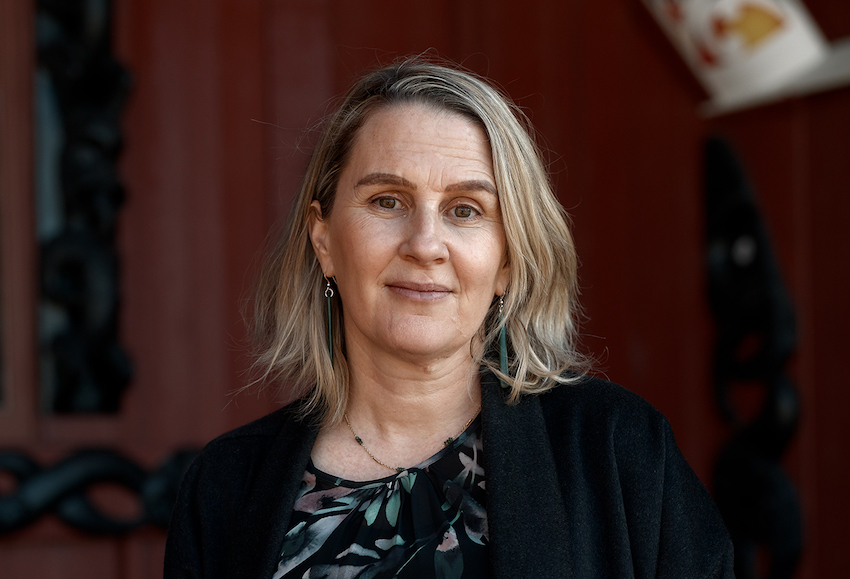 “If a company like Vodafone is making these massive transformational shifts to embrace te ao Māori in a genuine and authentic way, then it’s really exciting to see who else may flow with it.”

Change doesn’t happen overnight, but there’s been an evolution in race relations since the Bastion Point occupation, and that generational change, however incremental, is powerful. Shaw wants to see a version of Aotearoa where mātauranga Māori and te reo Māori are seen as strengths, and he wants that version to be the one his daughters grow up in.

“Their childhood experiences of te reo Māori and te ao Māori are different to ours – different to their grandma, their whānau, which was not a nice time. The sun is shining now and I’m hopeful that will be the ongoing experience.”

How each group implements what they’ve learnt at the wānanga into their workplace is one of the big challenges as they finish the course. Vodafone’s been making steps towards creating a business model that honours mātauranga Māori since releasing its policy about honouring the Treaty last year, but the work doesn’t stop there.

Inspired by Te Kaa, Govender has set himself the goal of providing more mentoring for Māori in the tech space.

“The values of whanaungatanga and manaakitanga have resonated with me the most and I would like to work with my whānau and work colleagues and friends to grow and become better at practically implementing some of those values,” he says.

“I will commit to creating a programme for Māori engineers and sacrifice my personal time for that.” This continues a tradition of mentoring and skills development in the Vodafone whare. Another recent initiative includes sending emerging Māori and Pasifika leaders on Kāwai, a leadership development course delivered by partners Indigenous Growth Ltd. An internship programme with Te Rūnanga o Ngāi Tahu has also been developed as part of a strategic partnership formed in 2020, with the dual aims of increasing digital connectivity within the iwi and boosting diversity in the technology sector.

For Clark, moves like this are all part of the forward momentum in Māori cultural competency and mātauranga Māori. But, she says, this movement is a pendulum, not a bell curve. As demonstrated by the recent protests by vocal minorities against Māori seats in councils, progress is often met with resistance.

“There has been a public groundswell where Māori culture is coming into vogue but just as easily that will be pushed back. It will be pushed back, so what we have to do is get enough people in behind the pendulum so that it doesn’t swing back so far.”

Te Kaa hopes its growing list of alumni will be that extra force behind the pendulum, swinging it as far forward as possible. Clark knows embracing te ao Māori will only make our businesses stronger.