The latest community outbreak of Covid-19 meant the last-minute cancellation of the annual Koroneihana at Turangawaewae Marae scheduled to take place over the weekend. Charlotte Muru-Lanning reports on what it meant for those at the heart of the event.Note: The Waikato-Tainui iwi uses double vowels rather than macrons.When the news of the first positive Covid […]

The latest community outbreak of Covid-19 meant the last-minute cancellation of the annual Koroneihana at Turangawaewae Marae scheduled to take place over the weekend. Charlotte Muru-Lanning reports on what it meant for those at the heart of the event.

Note: The Waikato-Tainui iwi uses double vowels rather than macrons.

When the news of the first positive Covid case came through on Tuesday afternoon, preparations for the annual Koroneihana at Turangawaewae Marae due to start the next day were already well underway.

Volunteers at the marae in Ngaaruawaahia had already set up numerous marquees and sound systems, kai had been prepped, 500 beds across the marae whare moe had been made and the first poowhiri of the week had begun; welcoming Ngāti Hauā and Maaori Wardens onto the paa.

The annual event has been an essential part of the Kiingitanga calendar for over one hundred years. Originally held at Waahi Paa, it’s since been shifted to Turangawaewae Marae as the marae became the base of the King movement. It marks the date that Kiingi Tuheitia Paki ascended the throne on 21 August 2006 following the death of his mother, Te Arikinui Dame Te Atairangikaahu.

Each year, Koroneihana attracts tens of thousands of people from across the country through the week and into the weekend. But this weekend, the famous red gates remained closed.

Archdeacon Ngira Simmonds (Ngāti Huri, Tainui, Ngāti Raukawa), Kiingitanga chief of staff, said Koroneihana provides “an opportunity for all of te iwi Maaori to gather to mourn the loss of loved ones, to talk about issues that are important and top of mind for our people at that time and consider how together we might respond”.

On Wednesday last week, both manuhiri (guests) and the Kiingitanga would have acknowledged Nga Kawe Mate o Tainui, paying tribute and remembering those from the tribe who had passed on since the last Koroneihana.

Kawe mate is a key part of the mourning process for those who are close to the Kiingitanga, so the cancellation has been difficult for many who planned to attend.

It’s the second year in a row that Koroneihana has been impacted by the pandemic. Last year the country was in level two during the planned event, which meant only 100 people could be on the marae at a time. As well, many tangi couldn’t go ahead due to restrictions throughout the year. Given 2020’s problems, many were looking to this year’s Koroneihana as a chance to properly acknowledge whaanau.

Simmonds said they had been preparing for at least double the normal numbers. “We were expecting a lot more on the premise since this would be kawe mate for essentially two years.”

“It’ll be hard for many of our people,” he said.

Kiingi Tuheitia’s decision to cancel the event last week was made before the prime minister had even announced the new lockdown. The Kiingitanga has toed a similarly cautious line throughout the pandemic, having cancelled last year’s regatta, coronation, poukai – going beyond the restrictions enforced by the government. “It’s not an easy thing for him,” Simmonds said, “but the well-being of the people is his entire priority at this point.

“The matrix of how to make a decision on things around this is incredibly simple. Is it good for the people?”


In place of the in-person event, this weekend saw an online kawe mate with photos emailed through from whaanau and a live stream broadcast from Kiingi Tuheitia. “Inevitably, it’s not as comforting and it’s not as appropriate as the real deal, so to speak, but it’s the best we can do in the circumstances,” said Simmonds.


The speech made by King Tuheitia as part of the live broadcast on Saturday morning emphasised unity among Māori in response to Covid-19. He encouraged Māori to stick to lockdown rules and get vaccinated.

The speech also emphasised the importance of unity among te iwi Māori in ensuring the Crown uphold Te Tiriti. 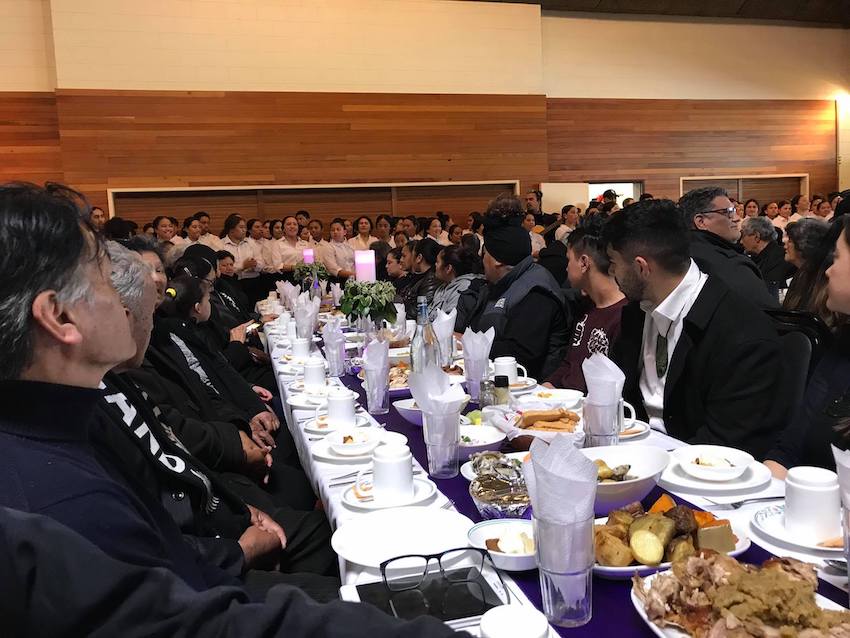 From the 2019 Koroneihana, the last before Covid-19. (Image: Marama Muru-Lanning)

Although food preparation for the event had begun earlier in the week, nothing would be wasted, said Turangawaewae ringawera Glenda Raumati.

“We’re lucky because we managed to freeze a lot of the perishables,” she said. Boxes of vegetables – rīwai, carrots, onion, pumpkin, lettuce and cauliflower all donated from Puuawaha – have been sent to Waahi paa where they will be distributed to whaanau in need.

Buildings on the marae have been repurposed as Covid-19 centres, and the vaccination centre at Nga Miro health centre across from the marae started up again last week. They’re also putting together distribution plans for kai boxes for tribal members.

Last week Raumati said she’d miss coming together as an iwi, the familiar faces and the stories, but is encouraging those that would have attended to still celebrate within their own bubble.

“Koroneihana is such an important part of the rhythm of life at Turangawaewae, to not have it two years in a row is unsettling,” she said. “There’s a sense of sadness.”

Turangawaewae kaimahi Harley Muru (Waikato-Tainui, Ngāti Maniapoto) was part of a team of 15 volunteers who had been tasked with setting up speakers and screens around the marae for the event.

He was already on his way home to Raglan on Tuesday afternoon when he heard that Koroneihana had been cancelled. So he turned around and went back to help pack the equipment back down.

“It took six hours to set up, and three hours to pull it down,” he said.

According to Muru, everyone is on board with the decision, even if it meant undoing hours of work and preparation. “It is what it is and we’ve got to do the best for our people.”

These responses to the pandemic reflect how adaptable iwi, hapuu and marae can be with traditions and practices, especially when it comes to keeping each other safe. “There’s tikanga, but this overrides tikanga because we’re trying to safeguard our people,” he said.

“We look after people through Koroneihana, and so we’ll look after them through Covid.”