Dismissing accounts of worker mistreatment and trashing a journalist isn’t the best way to support the struggling hospitality industry, writes Jihee Junn.Earlier this week, Albert Cho uploaded a post to his Instagram, just like he does any other day. And like the thousands of other entries on his account @eatlitfood, the post featured photos of […]

Earlier this week, Albert Cho uploaded a post to his Instagram, just like he does any other day. And like the thousands of other entries on his account @eatlitfood, the post featured photos of a delicious array of edible goods – pizza, pretzels and freshly baked doughnuts from a brand new Auckland eatery called Alpha, complete with the usual lengthy descriptive caption detailing its lush juicy salmon and warm fluffy bread.

But rather than stop there, the highly successful Auckland food influencer, who currently has more than 67,000 followers, made the point that Alpha’s owner had his full backing, before ending his caption with this: “On a final note, if you wanted my opinion on Jean Teng’s dull, unbalanced, extremely contradictory, out of touch, absolute waste of time, time which I will definitely fucking collect, trash-worthy article for Metro, there we go.” Alpha, for those who don’t know, is the latest venture from Auckland’s Pasture, a small fine-dining restaurant that serves an elaborate multi-course menu to just six guests at a time, who each pay more than $300. Pasture is one of the most celebrated restaurants in New Zealand, attracting praise both here and overseas, with Metro naming it restaurant of the year in 2019 while its owner, Ed Verner, was awarded the title of best chef.

A few weeks ago, however, the same magazine that once bestowed Pasture these laurels exposed a series of alleged flaws. A feature written by Metro’s food editor Jean Teng and former Pasture employee Kirsty Fong told the story of people who claimed they’d been significantly underpaid at Pasture for the hours they worked. It detailed gruelling 14-16 hour shifts, with one fine-dining intern recounting being paid as little as $307 for working 60 hours a week. A particularly striking quote: “It’s a sad truth that you could earn more working at McDonald’s than working at the best restaurant in New Zealand.”

Verner told Metro that only one employee had approached him with concerns their pay “did not equate to minimum wage”, and he “immediately increased his pay, reduced his hours and provided him a parking spot … After this, we hired a third-party accounting firm to ensure no repeat issues could occur.” He told the magazine “no workplace is immune to having some number of team members leave with a negative view” and that “it is always my desire to be fair and live up to my obligations as an employer as the employees are what makes up Pasture”.

Cho took that response and turned it up to 11, skating over the accounts of alleged mistreatment laid out in the article in carefully reported detail. After receiving some heat in the comments, Cho elaborated that he believed “a food writer’s job is to keep the dining culture alive” and as restaurants have been hit so hard by Covid-19 lockdowns, the past shouldn’t be brought up at a time when owners are at their most “emotionally fragile and vulnerable”. Cho insisted that the pay was “still above minimum wage, more than I was earning as a full time journalist and many of my friends who are lawyers and accountants”. 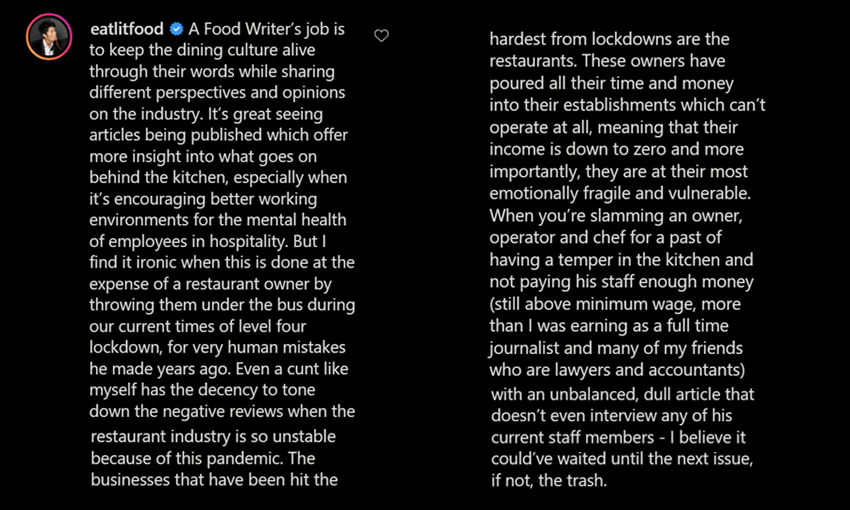 Cho’s argument seems strangely dismissive of the range of very serious allegations by former workers at the restaurant. And the Metro reporting makes clear it was more than just a one-off instance “years ago” – nine former employees were reported to have had bad experiences, some as recently as 2021.

Supporting the dining scene also means supporting all those who keep the industry alive, including the people at the lowest rung of the hospitality ladder, especially as most former employees were migrant workers with visas specifically tied to their employment at the restaurant. Metro’s article isn’t just some “out of touch, absolute waste of time” hit job based on unfounded claims – it’s an important piece of reporting shedding light on practices long normalised in the hospitality industry in the hopes of creating an environment that’s better for workers and in turn, better for owners too.

Snarky yet entertaining takes have always been part of the Eat Lit Food brand. But it’s one thing to do that while reviewing dumplings and croissants – after all, as his bio declares, it’s “just [his] fucking opinion” – and another to do it to people. Because while Cho’s most cutting words may have been directed at the journalist who reported the story, doing so meant undermining the experiences of the workers who spoke out, regardless of whether the situation has improved at Pasture and regardless of whether there were employees at the time who had different experiences. Since starting Eat Lit Food back in 2017, Cho has built a loyal following keen to hear his recommendations, delivered in a style that’s refreshing and new for Instagram’s younger, more diverse audience. As revealed on a Spinoff podcast in 2019, Cho has come to wield a level of influence considered powerful enough for some eateries to pay him to review their food. Thanks to his Instagram, he’s also attracted mainstream gigs for the likes of The Denizen magazine, as well as this year co-judging Viva’s restaurant awards alongside household name Jesse Mulligan.

Furthermore, as someone of Korean descent, his posts about the food he grew up loving introduced tens of thousands of new people to dishes like kimbap and sundaeguk, helping to dispel any ignorant assumptions that less mainstream cuisines often attract. Which is why it’s even more disappointing that Cho used his platform to nastily, and wrongly, attack as “trash” the work of a young Asian woman food writer working for one of the country’s most highly regarded publications.

As Cho points out, we’re all human and we all make mistakes. But by dismissing the mistakes made at Pasture, those who were wronged are in effect told what happened to them is unimportant, that they should remain silent while the restaurant itself soaks up the kudos. In doing so, it only makes such experiences likelier to happen again.

READ:  Here we go again: Looking after your mental health during the new lockdown
Shares
Share This
Finance Advice 2021