Sleep Week: Were they a health fad? A sex thing? And why did my parents get one in the 90s? Calum Henderson investigates. All week, The Spinoff is tossing and turning through a range of perspectives on sleep – read more Sleep Week content here.Of all my childhood memories, my parents getting a waterbed is probably the […]

Sleep Week: Were they a health fad? A sex thing? And why did my parents get one in the 90s? Calum Henderson investigates.

All week, The Spinoff is tossing and turning through a range of perspectives on sleep – read more Sleep Week content here.

Of all my childhood memories, my parents getting a waterbed is probably the one I think about the most.

I don’t remember why they got it or where they got it from. I don’t even remember them dragging the garden hose around the side of the house and feeding it through the bedroom window like a curious snake, although I now realise that must have been how they filled it up. All I know for sure is that one night they went to sleep on a conventional mattress, and the next night they went to sleep atop water. And I have a lot of questions.

What would compel two practical, evidence-based thirtysomethings to suddenly pursue such a radically different way of sleeping? Were they won over by something they read in The Listener? Or was it some kind of freaky word-of-mouth sex thing I was too young to understand?

To get to the bottom of this puzzle, we first need to understand the waterbed itself. Where did they come from?

The modern waterbed was invented in 1968 by San Francisco design student Charlie Hall. Water was actually his second choice of filling for an experimental new bed, after Jell-O proved too heavy and expensive. “The first ones were very wavy,” Hall told Simon Barnett and James Daniels on Newstalk ZB’s afternoon show in February. “The original concept that I patented [in 1971] was a water mattress inside a containing frame with a heater – it wasn’t any good if it was just a bag of water.”

Furniture designers picked up Hall’s concept and ran with it, adding extravagant headboards with lamps, bookshelves, stereos and other bells and whistles, decking the frames out in luxurious soft fabrics the likes of which the bedding industry had never seen before. “‘Firmer is better’ was the story they were telling back then,” Hall remembers. Waterbeds turned this conventional thinking on its head. Waterbeds were the future.

When did they arrive in New Zealand?

As is often the case, the future took a few years to arrive in New Zealand. But by the start of the 1980s, we had several dedicated waterbed manufacturers and retailers with evocative names like Dream Merchants and Waterbeds of Distinction.

Liz Gracewood’s husband Wallace was the GM of Classic Waterbeds (founded by the appropriately-named Ken Waters) and remembers the 1980s as a boom time for the local waterbed industry. “We went to LA and San Fran to visit stores, even to a Waterbed Convention in Las Vegas…”

Although New Zealand bedrooms tended to be too small to accommodate the kinds of elaborate setups seen overseas, the Gracewoods still owned a top-of-the-line model boasting new “waveless” technology, housed in a rimu frame with six drawers underneath, fitted side tables and a headboard which had speakers and a radio and tape deck in the middle.

What was so good about them?

A lot of people really loved their waterbed. At their peak, waterbeds were a $2 billion industry and accounted for over 20% of all bed sales in the US. While that number may not have ever been so high in New Zealand, as the 1980s progressed waterbeds were increasingly adopted into the mainstream. As the famous 1987 episode of Close Up about a young foreign exchange dealer reveals, John and Bronagh Key slept on a waterbed. 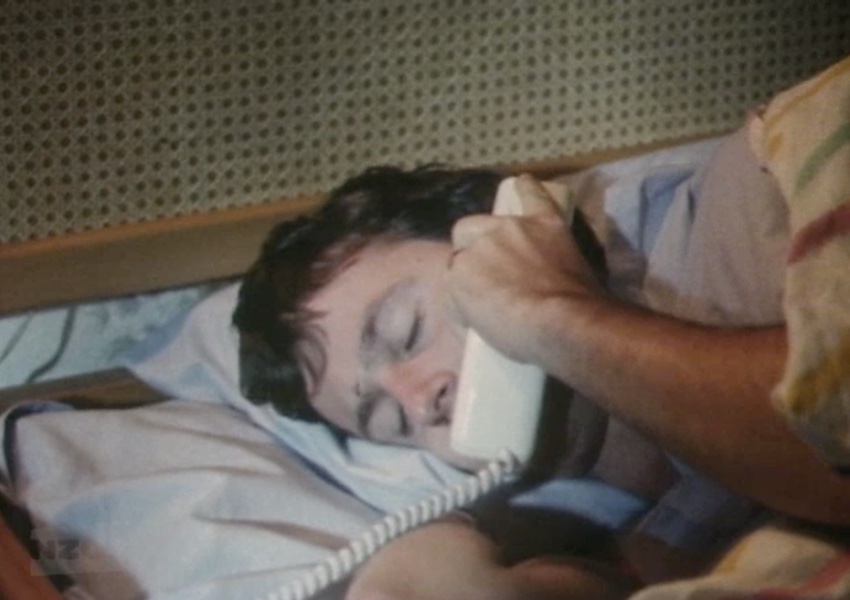 Why? The three words most commonly used by a waterbed salesman: “No pressure points”. The water naturally conforms to the contours of your body, which means you don’t feel the need to change positions as often as in a conventional bed, theoretically resulting in a better sleep. Or, as one Dream Merchants TV ad succinctly put it: “No tossing and turning – great night’s kip!”

Tony Prentice from the phonebook-friendly AB Waterbeds, one of New Zealand’s few remaining waterbed retailers, echoed these sentiments when RNZ’s The Panel rang to ask this very question earlier in the year. “You can stay in the same position all night if you wish,” he explained.

Through a family waterbed connection, Liz’s daughter Jolisa Gracewood got a waterbed of her own when she went to university in Christchurch in the 1980s. She remembers it being “cosy and enveloping”. The temperature control ensured the bed stayed warm in winter and cool in summer, which also helped make it a focal point any time the flat had a party. “People would gravitate to the big warm bed and lie there talking for hours. You could fit an astonishing number of people on that bed.”

Were they a health fad?

Early examples of the waterbed were used in medical settings as far back as the 19th century, long before Charlie Hall came along and patented his PVC bladder filled with water, so there is some health precedent. And as the waterbed market matured in the 1980s, more and more ads focused on the “good for your back” angle, including testimonies from very real-sounding doctors. 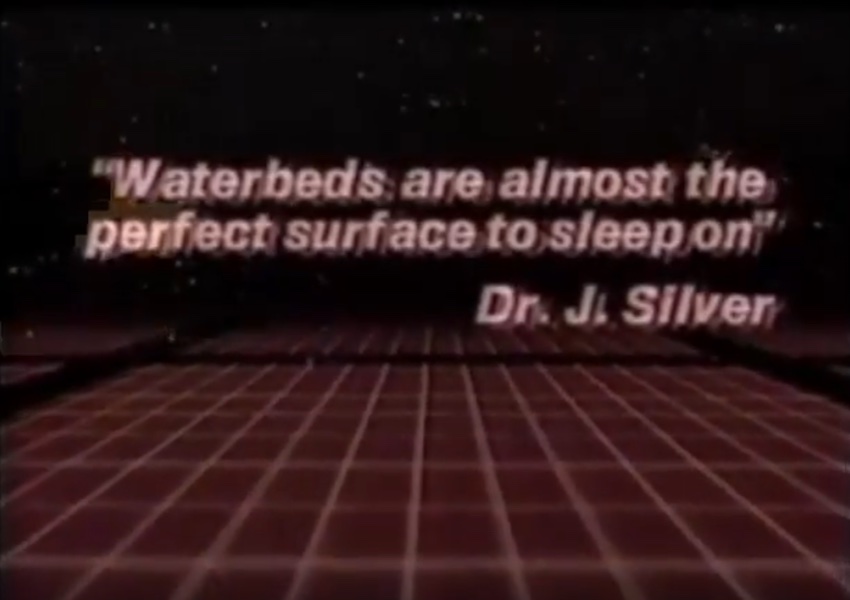 While most of the health benefits of sleeping on a waterbed remain unproven by science, a lot of people did seem to find them useful for treating their specific aches and pains and sleep problems. Word of mouth from these converts certainly would have contributed to the waterbed’s popularity.

Charlie Hall insists he didn’t have sex on the brain when he designed his waterbed in 1968, the year after San Francisco’s Summer of Love. But, as he told Newstalk ZB, “[people would] look at it and say ‘oh, this undulating thing, think of the possibilities’. It was moving back and forth and wiggling and all that stuff and people would come up with their own plan.”

Hugh Hefner was among the first to realise the waterbed’s sexual potential, and they became a prominent feature of the Playboy mansion’s interior design throughout the 1970s. Marketers also frequently played up the shagadelic angle. “Two things are better on a waterbed,” one famous slogan winked. “One of them is sleep.”

It’s safe to assume any adult who owned a waterbed was at the very least aware of the sexual connotations of that decision. The question is whether they bought one because or in spite of that knowledge. Either way, most who lived with one for any length of time seem to have found the sexual novelty quickly wore off.

Question 14 of an extensive FAQ on The Waterbed Factory (a local waterbed conglomerate encompassing AB Waterbeds) website suggests a weariness from the waterbed community toward questions like “Will a waterbed improve or worsen my sex life?” The answer is curt and invites no further discussion: “Actually it won’t make any difference.”

Why did my parents get one?

The first bombshell Mum drops is that they never actually bought a waterbed – they were given one by my aunty and uncle, who didn’t want it any more. The second bombshell is that they decided to give it a go because she was pregnant when it was offered to them. The water mattress was supportive and made rolling out of bed in the morning easier. “I would recommend a waterbed for late pregnancy,” she says. “But I don’t think it was very good for our backs.”

They kept it for a couple of years, then went back to a conventional bed. “It may have been leaking,” Mum suggests when I ask after the waterbed’s fate. “I think we took it to the tip.” 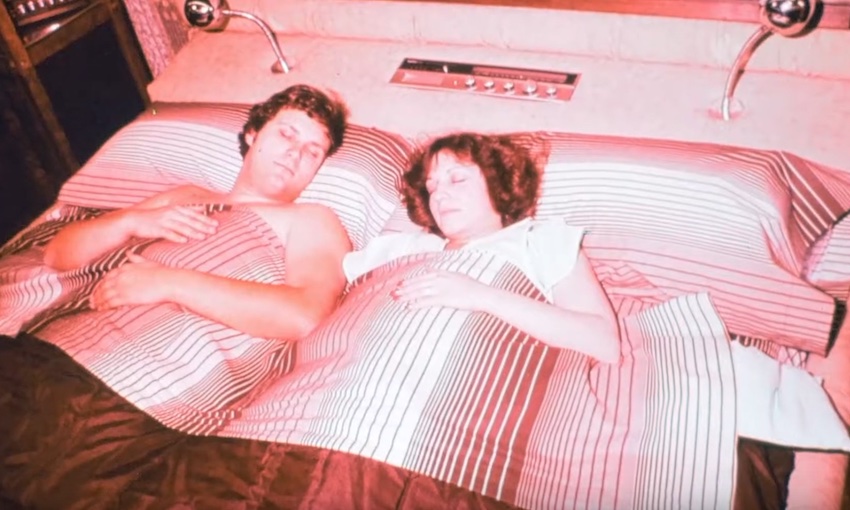 Where did they all go?

If there’s one thing my parents’ generation loves, it’s taking things to the tip. That’s probably the short answer.

The longer answer goes back to 1987 – the year the waterbed industry peaked, and the year global stock markets crashed. Not only did the financial crisis mean the types of people who bought waterbeds could no longer afford to buy quite so many waterbeds, it marked the end of an era. The waterbed was a symbol of a kind of lifestyle that was being left behind.

People didn’t take their waterbeds to the tip en masse, but they also didn’t buy a new one when their old one inevitably sprung a leak or ruined their spines. By the 90s, the rest of the mattress industry had caught up to the waterbed’s comfort levels, with memory foam and pillow tops approximating the supportive feel of a waterbed. And as society fell more and more in love with convenience, owning a waterbed made less and less sense.

Pouring conditioner into the mattress to prevent the water from going green, cleaning dead skin cells out of the corners of the frame, making sure there are no air bubbles and just the right amount of water, patching up leaks, moving them from house to house… The amount of admin involved in maintaining a waterbed feels at odds with the carefree era to which they belonged.

Despite their rapid decline in popularity, waterbeds never truly went away. “You can still get them”, Stuff commenter Hackedoff points out underneath a waterbed yarn from earlier this year, sounding in my mind exactly like David Brent when he turned up to work in a Cuban heel.

The waterbeds currently on the market are barely recognisable to the ones of the 70s and 80s, however. Today’s waterbed looks just like a conventional bed, and has so much stabilising technology and extra padding you hardly feel a wobble at all. In a way they have matured in parallel with their original demographic – those who first bought waterbeds as adventurous new agers are now turning to them again in search of therapeutic solutions to their chronic aches and pains.

The fondness many of this generation feels toward the waterbed is still strong. “I had waterbeds for 30 years – zero back problems,” claims Hackedoff as their comment takes a wistful turn. They say they spent over $10,000 on their latest bed, a top-of-the-line model with a high-spec conventional mattress. “The sleep is good, but not as good as my old friend the waterbed.”

READ:  Would you like to hear a story about The Very Hungry Caterpillar?
Shares
Share This
Finance Advice 2021