We are facing an uncertain future, says Emily Writes, but at least we’ll have a baby chimp to coo over.  Life is very hard. But Sally the chimp at Wellington Zoo is having a baby. When I saw Sally, my favourite chimp, at Wellington Zoo last weekend she looked so extremely over it all. I […]

We are facing an uncertain future, says Emily Writes, but at least we’ll have a baby chimp to coo over.

Life is very hard. But Sally the chimp at Wellington Zoo is having a baby.

When I saw Sally, my favourite chimp, at Wellington Zoo last weekend she looked so extremely over it all. I automatically felt an affinity with her. I had to find out more about how she’s coping and when we would all get to see her baby. Lisa Ridley, Primate Keeper at Wellington Zoo humoured me.

Hello! Life is very stressful. When I saw that photo of Sally you posted on Facebook I just felt like she was the absolute mood of the country. 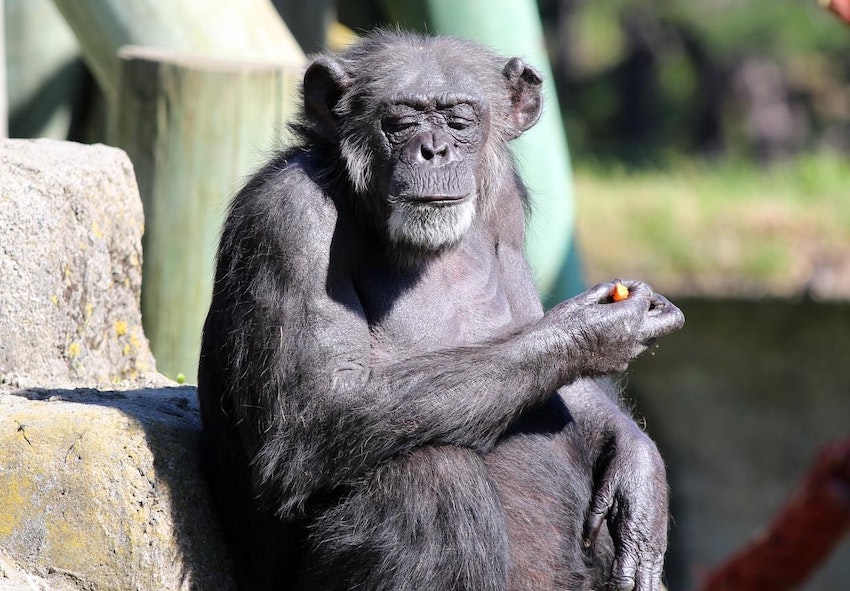 Just how pregnant is she?

Sally is very pregnant, her belly gives it away, she is in her last trimester now.

Is she having just one chimp baby?

Yes, at this stage we presume she is having just the one which will be enough of a handful! However, Chimpanzees have been known to have twins.

How many babies does she already have? Can you tell me about them?

Sally is an experienced mother and already has one offspring in our Chimp community. Bakari is nine years old and still very much a mummy’s boy, but he is also at an age where he is very mischievous just like little male Chimps are. He loves to display and look all grown up, by using objects such as rubber hoses to throw around and hit things just like Chimps do when they display. Over the last few months, he has had a growth spurt and his face is starting to darken like an older Chimp. He will soon be a big brother to a little sister or brother Chimpanzee, no more mummy’s boy. I saw her last week, and this little chimp was hitting her with a stick and she just swiped the chimp baby and it fell on the floor and let me tell you it was extremely satisfying to watch as my own children yelled at me that it was too windy/they want an ice block/they want to go see the kangaroos etc.

READ:  Ali Mau on being harassed and outed by the gossip pages

Yep, I would say that was our youngest Chimp Kitwe (7). He is at a Chimp mischief growth development stage and he finds it fun getting up to mischievous antics with Sally and the others.

Where is the father and is he doing anything? Is he giving Sally foot rubs because she deserves foot rubs.

The father is our community’s alpha male Alexis, he won’t play an initial part in the birth and upbringing but as the baby Chimp gets older, he will spend time grooming and playing with his offspring. He will invest time with Sally as the mother of his offspring and interact with the infant when Sally allows him to. Male Chimps do have paternal recognition of their offspring and as the alpha male, they are his future in the chimpanzee community. But for now, he’s doing a lot of displaying and is a little frustrated with Sally at present, as she is his favourite and she’s not showing him any attention – understandably as her mind and body are otherwise occupied with pregnancy and the upcoming labour. Sally is definitely not getting the foot rubs she deserves.

The process now is to wait, watch and monitor Sally. We will be keeping a very close eye on how she is progressing in the last trimester of her pregnancy. The keepers will look after the Chimp troop as they normally would, but will just pay extra attention to how Sally is behaving.

How will Sally give birth?

As the time gets closer, she will distance herself from the troop, and try and stay out of any social dynamics going on in the community. Sally might start nesting a lot more and resting by herself. If she is in labour, she might look very agitated, moving around and sometimes females lie on their stomachs to help with contractions. Unlike humans, Chimpanzee females will usually give birth with no one else around, and usually it is overnight as that’s the safest time for a baby Chimp to be born. However, birthing is unpredictable and Sally could go at any time.

READ:  Some big, clear calls are urgently needed on the path out of elimination

When can we see Sally’s baby?

Usually, it’s very hard to see the baby when it’s first born – even keepers don’t get a very close look. Sally will keep the baby chimp close to her belly, cradling the baby chimp as this is the safest place for the newcomer. Sally will have access to the habitat, and we will be monitoring her and the baby’s progress. You may be able to see a glimpse of the baby as it clings tightly to the underside of Sally’s belly, but it will be a few weeks before anyone gets a real good look.

How cute are chimp babies? They’re super cute eh? Like the cutest?

Baby Chimpanzees are very cute and extremely helpless at birth, depending solely on their mothers until they can survive by themselves at around seven years of age.

The cute factor comes from their big ears that they must grow into, their adorable pink faces, spindly arms and legs, and not forgetting their very cute white bum tufts that they have until they are around five years old. The white bum tuft helps other chimps visually identify that the infant is still young.

Will Sally get a “push present’?

No push present but I think the only push present Sally will want is an easy birth, some peace and quiet from the rest of the community… and to be left alone to bond with her newborn. But she will also get support from the community once the infant is born.

Wow, we are basically all Sally right now. Can we please have an appearance by the chimp baby at the 1pm briefing to make it all less stressful?

READ:  Is NZ a tax haven for the rich and dodgy? The Pandora Papers reignite the debate

Well, we might have to leave that one up to the protective mum Sally and when she wants to show us her precious bundle.

Best of luck Sally. Thanks for lifting the mood of the nation as we eagerly await the arrival of your baby!