Catherine Woulfe stocks up on white sugar and Granny Smiths and kills pudding for her family forever.

What it does need is a ranking. So turn straight to the Puddings section, where you’ll find 24 recipes in want of stratification. They hold no surprises, these puds. They skew milky, mild and bleakly sweet. As an indication: across the whole section there are only four teaspoons of spice up against nine-and-three-quarter-cups of sugar.

Through June I have cooked and sampled all 24, peaking at five puddings in one day. I pulled a muscle creaming butter and sugar. The markings rubbed off my measuring spoons. I cooked so much pudding that I extinguished my toddler’s nascent love of both cooking and pudding. “Can I just have a pear?” whispered my sugar-mad six-year-old, weakly, on day 10.

Early on I made a bad mistake. I tackled the project alphabetically and friends, that meant four custards in a row. I ate a bowl full of each, even the one that tasted the way that peach skin feels. I became a custard golem, a sentient congealed skin.

I wibble-wobbled into a pudding doldrums and stayed there for a week.

That wasn’t even the low point. Please refer to: the Christmas steamed pudding.

But I rallied, and you know what? Every pudding has its good bits and so it was with this project. I got to arrange glacé cherries in the middle of canned pear halves. I got to dump a cup of jam onto a sheet of pastry, and bake it. I made my first-ever steamed pudding, which felt a bit like learning to swaddle a newborn and smelled, appropriately, like sweet milky farts. And I had a lot of pudding for breakfast.

See you back here in summer for a comprehensive ranking of the most deranged section in the book: Cold Desserts.

NB: I have photographic evidence of every pudding, however I’m not putting them all here as lots of my photos suck. I very much did not make my own sweet shortcrust pastry, I used the bought stuff – Edmonds’, of course. Also my cornflour expired in 2018. Please understand I’m here to judge the recipe, not the concept, and the recipe produces a version of chocolate self-saucing pudding that requires you to wield your spoon like it’s a spade and you have a body to bury by sunrise. Not in fact a desiccated cowpat (Photo: Catherine Woulfe) 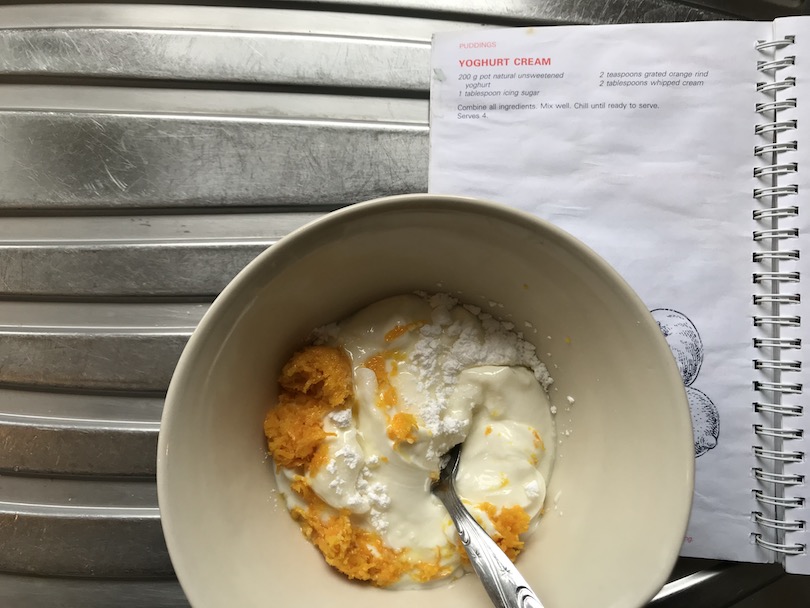 The making of the second-worst pud in the book (Photo: Catherine Woulfe)

This is custard-powder custard plus an egg and it really is like velvet, in that it’s kind of furry. Also reminiscent of puffballs and the foam that comes out of old couches.

I simply do not believe that anyone in the Edmonds test kitchen has ever cooked this pudding because if they had, they’d have fixed it:

2) Putting the raisins into the basin first – one whole cup of raisins, mind, because this book does not fuck around – means the pudding turns out less like a perfect dome and more like a landslide of dried fruit.

(This seems like a good place to note that this is not the first time I’ve cast aspersions Edmonds’ way.)

READ:  Sucking Up and Kicking Down: The NZ Media Covers the Queenstown Summit. 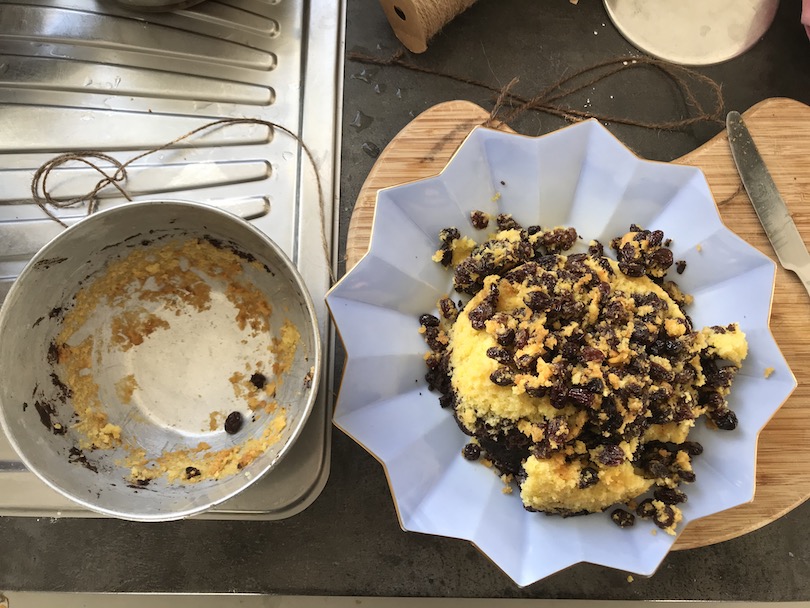 I had to double the pastry, due not to taste but to physics.

Have you done that gestational diabetes blood test where they make you drink a whole cup of glucose syrup first? Texture-wise, you’d be better off pulverising a packet of wine bikkies over your stewed apple.

There were times during this exercise when I felt I was being trolled by a cookbook and this was one of those times.

What you do is make a baked custard with a lot of soft breadcrumbs mixed in. When it’s cold you spread jam over the top, then meringue on top of that.

It is a soggy Louise cake. It’s custard with crumbs in. French toast slash pavlova. A pretender to the pudding throne. I took it to a friend’s house, left it on the doorstep and ran away. Petition to dethrone the Queen of Puddings (Photo: Catherine Woulfe)

Suet. Rhymes with spew-it. Suet is, says Wikipedia, “the raw, hard fat of beef, lamb or mutton found around the loins and kidneys”. This recipe requires one cup of it, shredded.

I had to phone ahead to order some and when I went in the butcher held up a baggy of it, beaming, and I gagged and blurted out “man, that looks gross”. To paraphrase the Simpsons, I could actually pinpoint the moment when his heart broke in two. 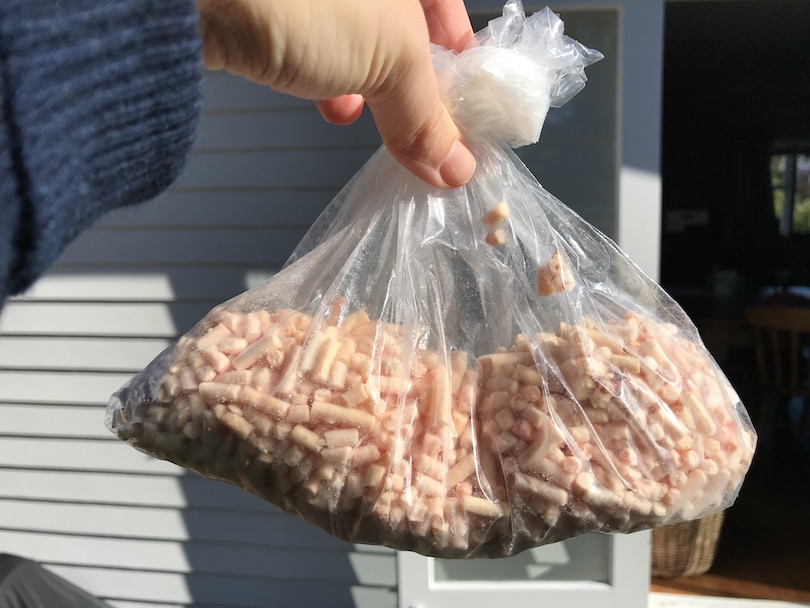 Would you put it in a pudding Y/N? (Photo: Catherine Woulfe)

Because of the suet I left this pudding til last. But the day after I broke the butcher’s heart I got up at 5.30am, mixed up a buttload of dried fruit with a tiny splash of brandy, scooped it all into a pudding basin, and put it on the stove to steam. Hell yes I’d finished the section. Knocked the pudding bastard off. It felt momentous.

READ:  How Laurel Hubbard’s road to Tokyo is forcing a rethink on what inclusivity really means

Four hours later I realised I’d forgotten to put in the suet. I sighed and I made a stiff gin and after the kids were in bed I joylessly made a second mixture, ungodly organ-fat pellets and all. The house has been full of the steam all day. Mm, fatsteam. Spew-it steam. Merry Christmas, I’m vegan now and so are all of you.

The only reason this recipe’s not at the bottom of the ranking is that both versions – with and without the suet – actually taste very very good. I’m taking some to the butcher.

Immediate points off due to the fact there’s no butter in the recipe.

My son, gently: “Mummy, I think this is one of those puddings where adults like it but kids really don’t.”

The “ling” implies something diminutive, smaller than, and what we are talking about here are four whole Granny Smiths wrapped in scone dough, then drenched in sugar syrup. Once cooked, each unit is the size of a petanque ball. Or an Archelon egg. “This is a significant pudding,” said my husband, defeated. Is it a pudding or a T-rex nest? (Photo: Catherine Woulfe)

A runnier powder custard. Note that none of these custard recipes is the same as on a box of Edmonds custard powder, and not one of them is as good.

Yum enough the first time around – I’d like it with more gooey sauce, and a lot more lemon – but I left it on the bench overnight by mistake and I was not sad that I had to chuck it out.

READ:  A blockbuster media deal could tie Three up with CNN and HBO 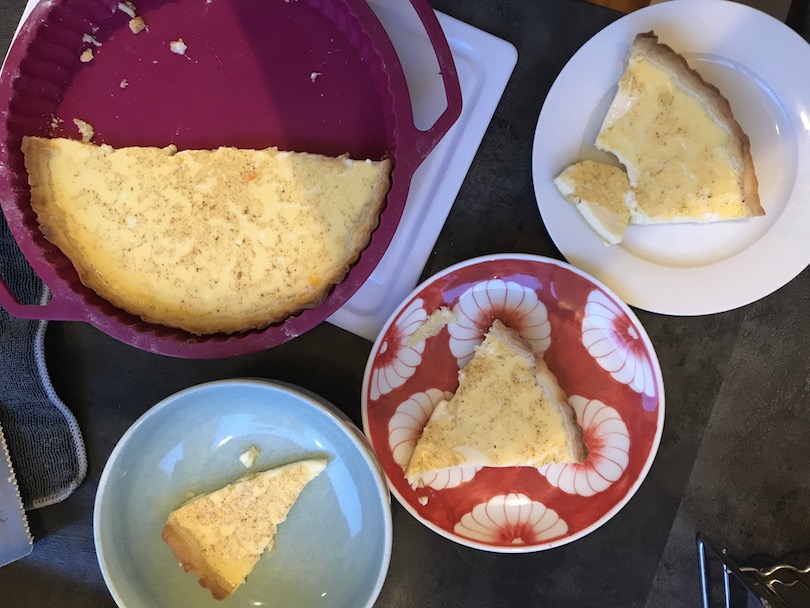 Dense, plain, utterly non-challenging; this is the one that smells like milky farts when it’s cooking. The kids were weirdly into it. 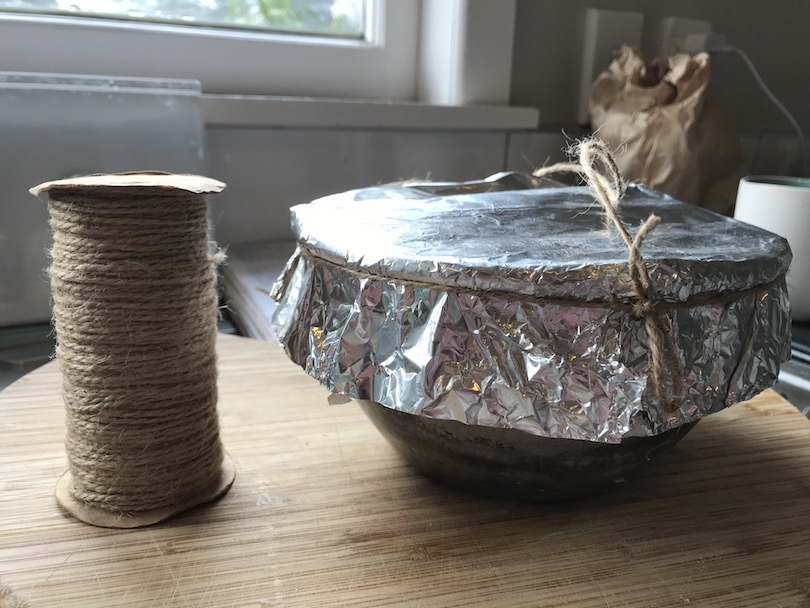 A plump steamed dome with a good toothsome crumb, and a wodge of jam on top because why not?

Hilariously, and absolutely typically of the Edmonds book, once you’re done pouring jam onto your sweet pastry you then sprinkle more sugar over the top. It tastes exactly like you think it would and secures this lofty spot on the list because at least it’s not beige. 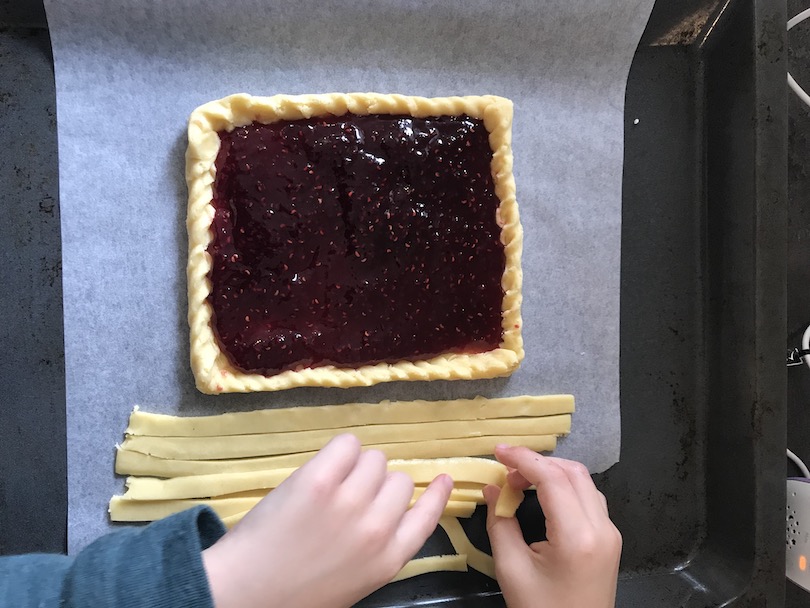 A high ranking that is based entirely on the fact you put five tablespoons of rice in three cups of milk, chuck it in the oven and two hours later you have a pudding of substance. Delicious stodgy alchemy.

Stewed apple covered with an eggy springy cake. A standout in terms of pudding-for-breakfast.

Stewed apple stuffed with currants, all slumped into a buttery syrupy pond. You’re going to need an apple corer (I made do with a paring knife and broke every single apple) and you’re going to want ice cream. Just solidly good and crunchy and caramelly. We tried it with the Yoghurt Cream, thinking it might lift the latter into the realm of the edible. It did not. 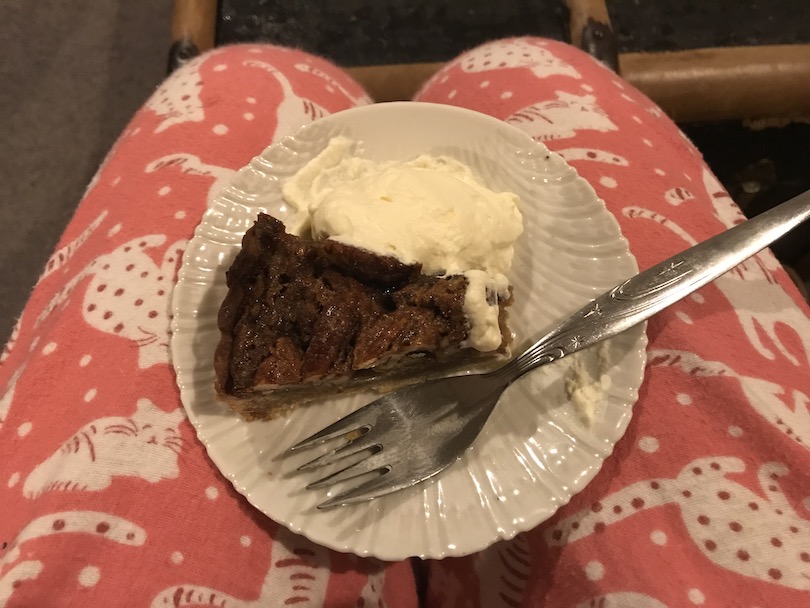 Good lord, if you ever need to cheer yourself up make a pot of sunshine-yellow lemon curd and a bowl of meringue and gobble them both up raw with a dessert spoon, hunching furtively at the kitchen bench, a vampire over a bled-out corpse. 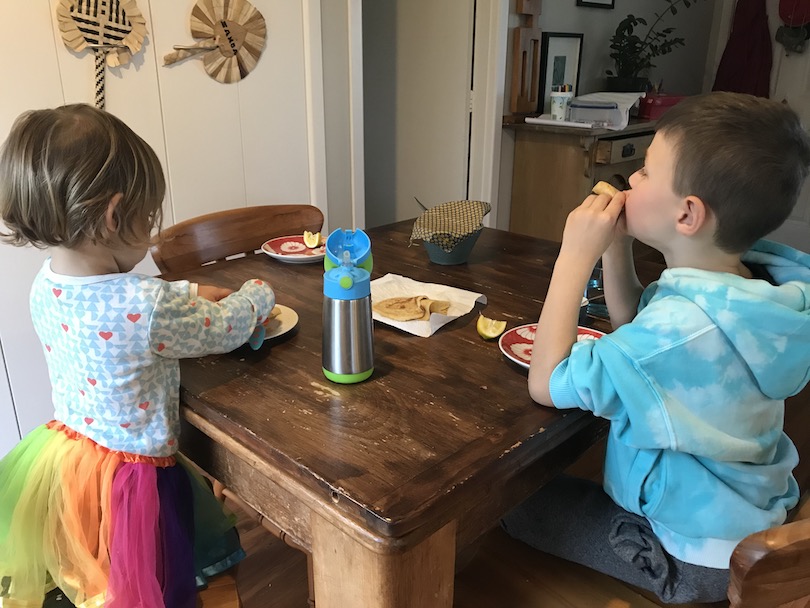 Pancakes round one (Photo: Catherine Woulfe)

I had this idea that the Edmonds pancake recipe sucked. It emphatically does not. This version contains zero (0) sugar and makes thin pancakes with lacy edges that crisp up golden. Like little doilies, if you will.

Important, urgent, genre-defying. Despite also making all of the above, I made this recipe – by choice – four times in two weeks. 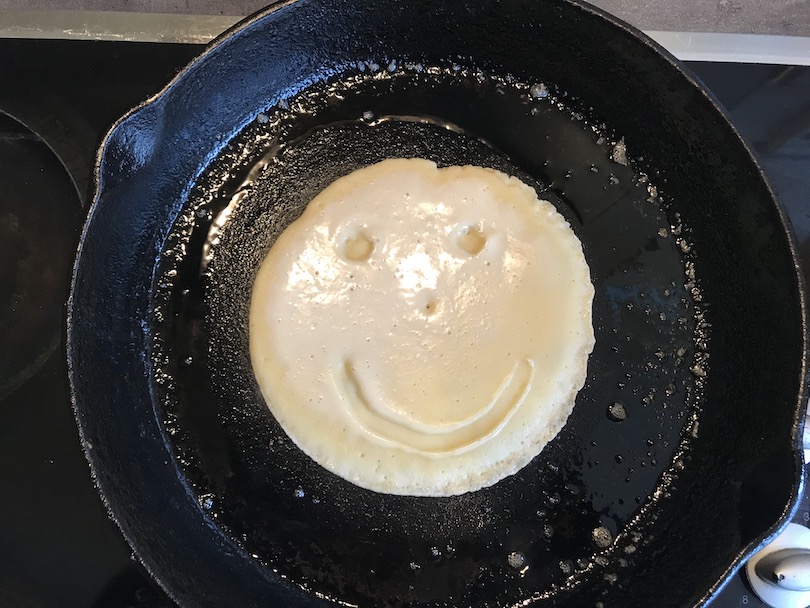