A life-long board game hater braves his over-stuffed cupboard in an attempt to bond with his family during lockdown. It doesn’t go well.No one opens the door to our games cupboard unless it’s a last resort. To venture inside is to visit a place where light, fresh air and Marie Kondo do not exist. It […]

A life-long board game hater braves his over-stuffed cupboard in an attempt to bond with his family during lockdown. It doesn’t go well.

No one opens the door to our games cupboard unless it’s a last resort. To venture inside is to visit a place where light, fresh air and Marie Kondo do not exist. It is a time capsule of bits and pieces of games collected over decades that refuse to be thrown out. Open the door and a cascade of broken bits, random dice and cards will rain chaos onto the floor. Opening that door means being forced to clean it all up, so no one opens that door.

Besides, my family is terrible at board games. We play far too hard. Catan has caused innumerable rifts that will require years of therapy to rectify. We can’t utter the word ‘Monopoly’ without accusations of previous indiscretions flying. But desperate times call for desperate measures. After a few days of lockdown, that familiar familial fatigue set in, so we braved the portal to another dimension, pulled all that crap out into our living room, and started sifting through it to hopefully find some family fun.

Here’s what we found… 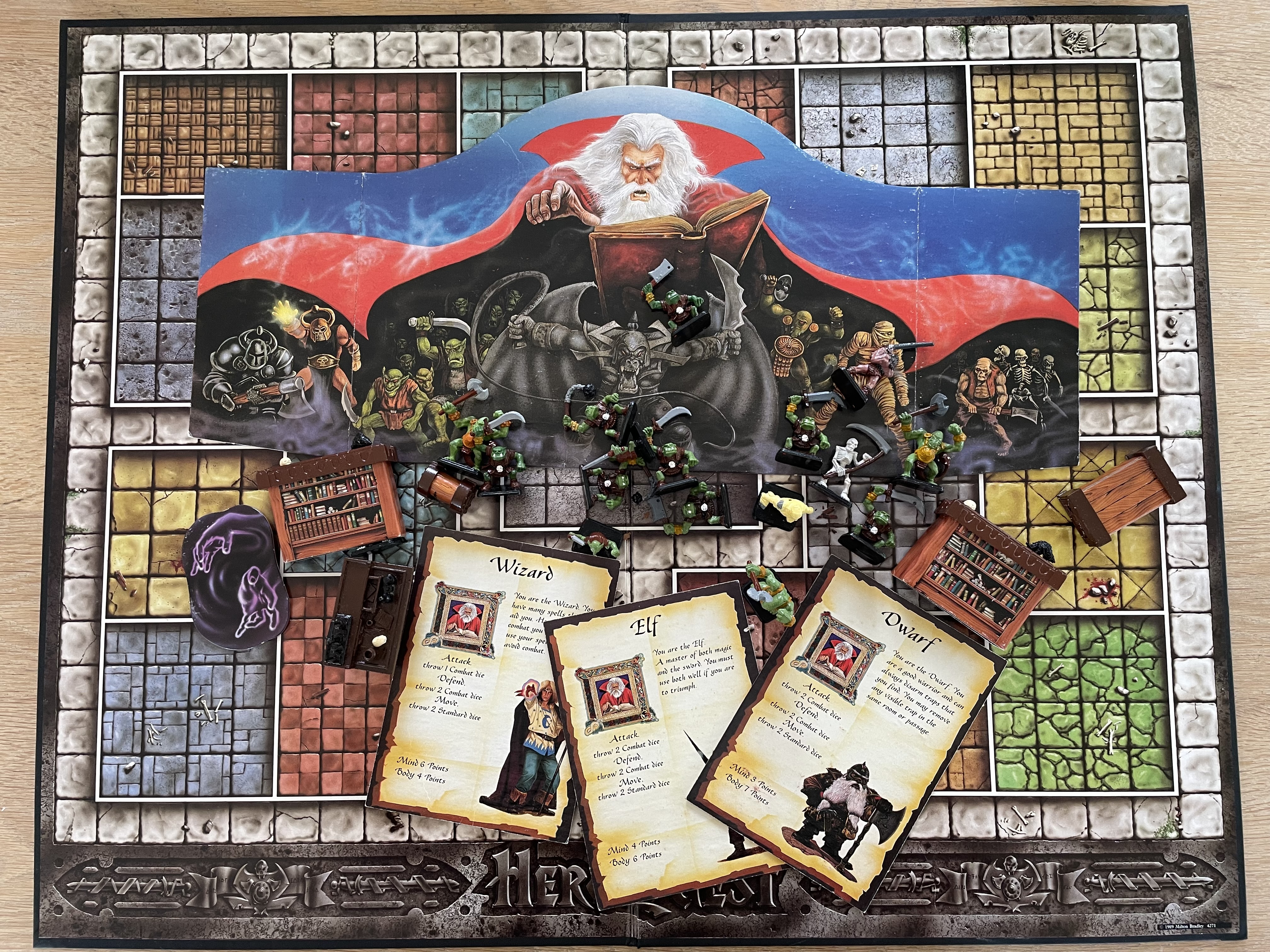 The dead live on in Hero Quest.

As a teenage virgin, I proudly hand-painted every single orc and troll figurine in Hero Quest like my life depended on it. My kids don’t care one jot. Over the years, almost every sword, axe and ball-and-chain has broken off them, destined to become tiny sharp pieces lodged in the carpet, waiting for my bare feet to stand on them in the dark. How do you play? Great question. I don’t remember. It’s kind of like Dungeons & Dragons – a wizard and a barbarian are the heroes, zombies and trolls are the bad guys, magic potions can be mixed and used, and a seven-sided dice is definitely involved. My son loves it, but he’s 11, so of course he does. All I can think about as we play is how much time I wasted painting those pieces. Afterwards, I just feel sad. A RUTHLESS GAME THAT WILL WRECK YOU.

This is possibly the smallest version of Snakes & Ladders in existence. It is tiny. Smaller than an iPad. Playing with four people would mean a constant and literal butting of heads. To avoid multiple concussions, my daughter and I were the only ones who played. Tension was high from the first roll. The magnets didn’t work. The dice kept rolling fours. Every snake was a slippery slope to tantrum town. “Go there!” my daughter – she’s seven – yelled at me. “You go UP the ladders, Dad!” Also: “Why are you writing all of this down?!” Snakes & Ladders is a game of ruthless monotony that mimics life’s ups and downs packed inside a four-inch tin. I won by throwing a six. Afterwards, my daughter ran off to her bedroom. She has a lot to learn about life. NO EGGS WERE HARMED IN THE MAKING OF THIS GAME.

“Don’t swallow or put EGG in mouth!” warn the instructions. I would do that and a whole lot more if I never have to play Hatchimals CollEGGtibles again. Based on a series of toys, this is a diabolical game full of terrible egg puns and ridiculous, made-up rules. It is my daughter’s favourite game. You win by hatching creatures like “Pigpiper” and “Hedgyhen” into existence. I don’t understand any of it, and assume it exists solely to sell more toys, so I rolled the dice and let my daughter do the rest. To her dismay, I started winning. As we neared the blessed finish line, she doubled the amount of eggs we were being forced to hatch, a move that also doubled the amount of time we were being forced to play this un-EGGciting game. I won by hatching an animal called ‘Mouseswif’. My daughter didn’t care. She set it all up to play again. 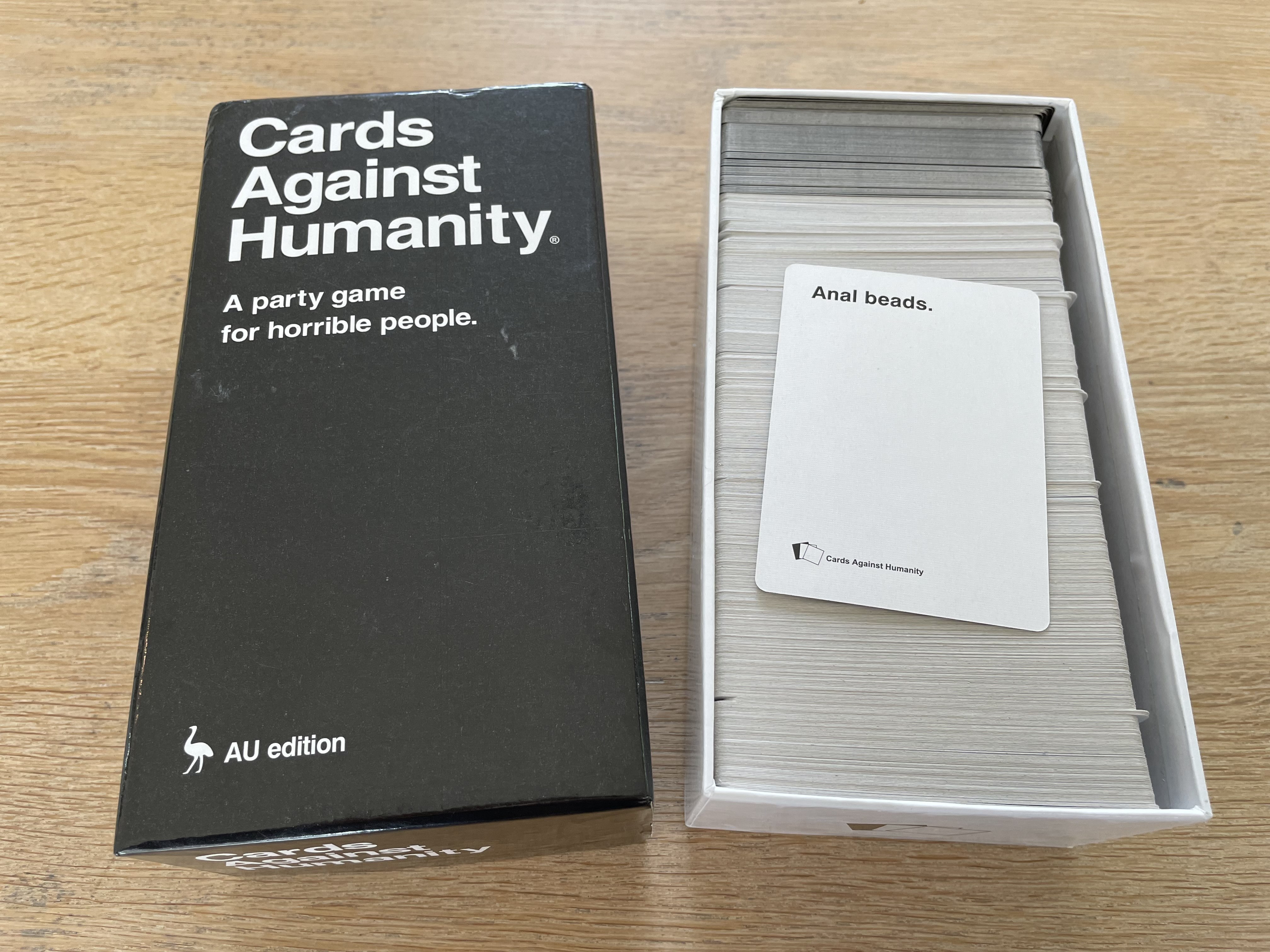 THIS GAME IS NOT APPROPRIATE FOR CHILDREN. Something’s cooking in the kitchen tonight.

My kids play Raid the Pantry like they eat during lockdowns: an endless, chaotic food frenzy. As soon as the cards are laid out, they’re all in, picking them up by the fistful, throwing others out, each seemingly existing in their own bubble with zero care for rules and regulations. You’re supposed to collect the correct ingredient cards to make a certain meal: crepes need eggs and flour; Mexican tacos need beef and cheese. I got borscht, a beetroot soup I have never tried and have no desire to. I managed to successfully make a mousse and chocolate mole before my son triumphed. Afterwards, he went into the kitchen and created an IRL food mess. The game of quick draw.

Pictionary, the game that makes an ass out of anyone who can’t draw, first came out in 1985. Our version was released in 1988. It smells rancid, like something found under rotting floorboards in a hoarder’s house. Inside isn’t much better: there’s no paper to draw on, the cards are outdated and the rules are missing. They’re not hard to understand though, with teams taking cards and attempting to guess what the annoying squiggles being drawn live in front of them are. I tried every configuration of teams in our bubble of four, and no matter how hard I tried, I couldn’t land on one that wasn’t guaranteed to end in a full-blown meltdown. Instead, I took Pictionary outside and threw it in the bin, where it should have been at least two decades ago. 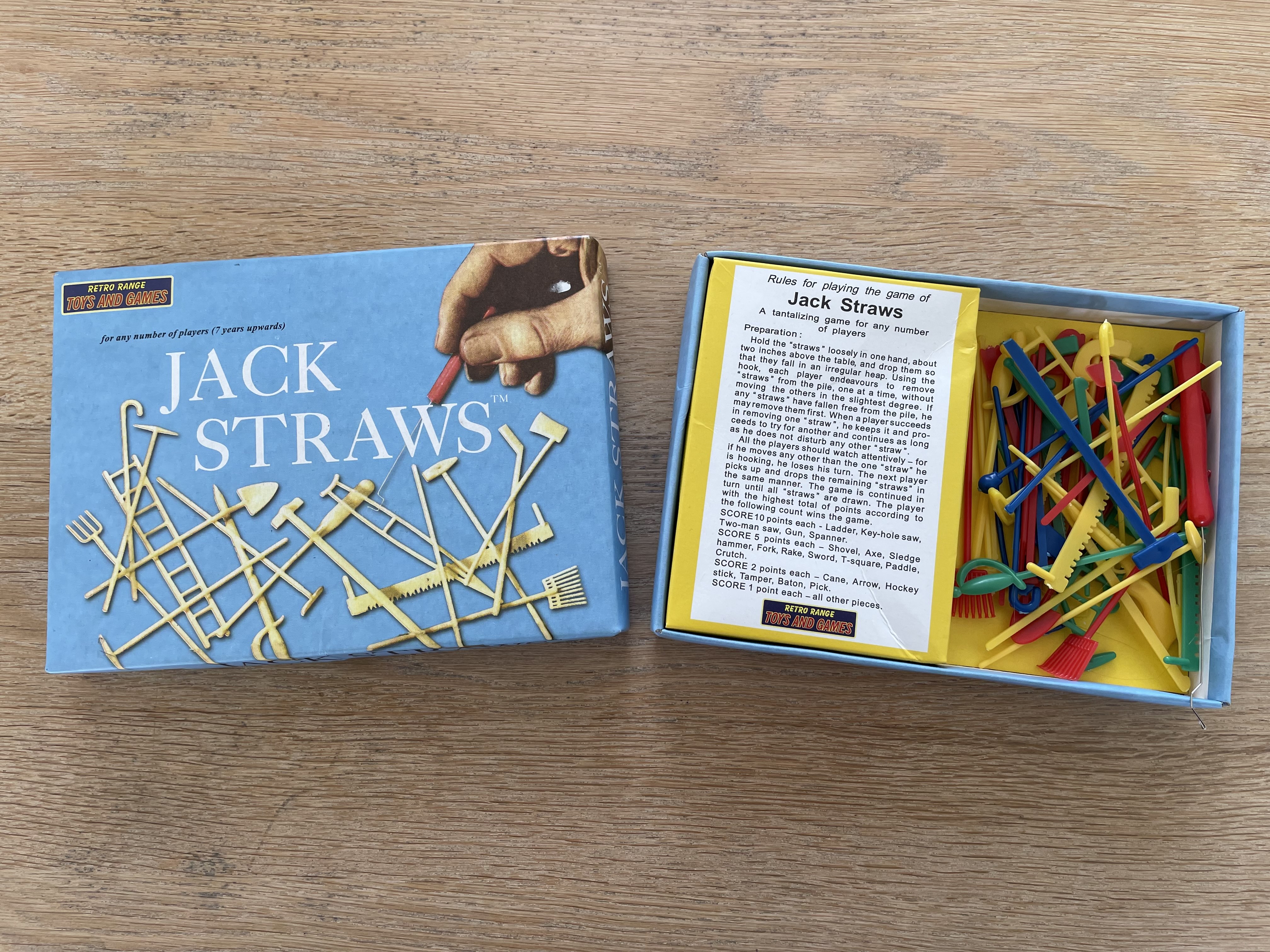 In Jack Straws, up to six players attempt to dislodge tiny plastic pieces from a collapsed pile without moving anything else. If something that’s not the piece you’re touching gets nudged, you lose, sucker. My daughter played this with just one hand, refusing to let go of a bag of lollies clutched in the other in case I snaffled them. Clearly, she knows her dad. It is a horror movie of a game with hand saws lodged in ladders, and axes intertwined with spears. Getting the gun rewards players with a full 10 points. I don’t know what this game is trying to tell kids, but it doesn’t seem good. LIFE IS NOT A GAME.

The money was mixed up with the playing cards, and the tiny pink and blue humans and kids were spread all over the floor. Life was messy. We spent half an hour setting up the board, and were yet to start playing when the first meltdown arrived. My daughter let rip a room-clearing fart, then refused to take ownership of it. When we tried again, I had just one turn – earning a whopping $50,000 salary for becoming a chef – before her second meltdown. She thought her hot chocolate had mint in it; it didn’t. No matter how much I proved to her otherwise, she wouldn’t accept it. The moral of this story is that sometimes life just sucks and you have to give up and move on. IT WAS NOT MISS SCARLETT WITH THE LEAD PIPE IN THE CONSERVATORY.

When I opened the lid, that musty antique store odour hit me instantly. It was dusty. I sneezed. I read the fine print: “Manufactured in New Zealand (in) 1975.” 1975! This version of Cluedo has somehow survived more than 45 years, only to die a slow death in our games cupboard. It’s in a terrible state. Inside the box are two wrenches, two Miss Scarletts and two candlesticks. There are no spare detective note pads, no sleeve for the murder cards to go in, no lead piping, and the pencils are blunt. The board is covered in stains, food crumbs and mouse poo. I packed it straight back up again. I’ll look at it again in another 45 years, when lockdown is but a distant memory.