But wait, there’s more! It’s the power rankings for episode five of RuPaul’s Drag Race Down Under.OK, before we get onto the queen herself, let’s have a moment of serious chat.“Has anyone done anything in drag they regret?” is, as leading workroom questions go, one of the more obvious ones to ever escape a queen’s […]

But wait, there’s more! It’s the power rankings for episode five of RuPaul’s Drag Race Down Under.

OK, before we get onto the queen herself, let’s have a moment of serious chat.

“Has anyone done anything in drag they regret?” is, as leading workroom questions go, one of the more obvious ones to ever escape a queen’s lips. However, in this particular season, it’s something that needed to be said.

Almost immediately after the contestants for Drag Race Down Under were announced, Scarlet Adams was called out publicly by fans and fellow queens for previous routines in which she performed in blackface and brownface. The queen had apologised for it on social media in 2020, saying that she was ashamed. She had updated the post earlier this year, and judge Michelle Visage had commented that “apologies were made, apologies were necessary”.

As I’ve stated previously, this season hasn’t been great about race from the jump.

That’s why it’s surprising and refreshing to see it actually brought up on the show. Scarlet immediately owns up to the blackface, saying that she was trying to make people laugh. This is immediately checked by both Etcetera Etcetera and Art Simone, who note that it’s hard to see it as an honest mistake, and that it’s “strange” to appropriate someone else’s culture for comedy’s sake. Adams is apologetic, but defensive: it’s hard to unlearn what’s ingrained in you as a child.

Etcetera Etcetera is especially firm here. She says: “While people of colour and trans people are still facing violence every single day from the systemic oppression that we live in, it’s not a joke to me.”

Adams’ history is later brought up on the runway by Ru herself. Adams apologises again. “I can’t deny that happened. As a dumb, ignorant teenager I made some mistakes I’m really not proud of and every day I regret those decisions. I regret the fact that I used my platform as a performer to ridicule people who faced systemic racism for hundreds of years, and I’m sorry to you, and everyone I’ve hurt.”

It’s her show, so RuPaul has the last word. “I am sure there are people who would want me to cancel you right here right now, but I’d rather this to be a lesson in humility and accountability. I pray that all of us can learn and grow from our mistakes.”

Look, it’s deeply not my place to forgive or condemn Adams. It’s not my pain, not my hurt. But, as a viewer, fan and critic of Drag Race, it’s encouraging to see it wrangle with a contestant’s past like this. Drag Race has been a vital queer text for a decade now, and it’s great to see it take on these difficult conversations. With that all said, this was a pretty great episode! It seems to be genuinely anybody’s game at this point, and Suzanne Paul was a shining beam of joy, as she always is. Plus, it featured the reading challenge – the challenge where the queens are actively encouraged to insult each other, rather than just implicitly encouraged as is normal. My two favourite reads are below:

READ:  Review: Heaven and Hell – the Centrepoint Story is the remarkable tale of an unremarkable monster

“For someone who is so woke, I wonder when you’re gonna wake up.” – Maxi Shields on Etcetera Etcetera.

“If I was you I’d get a Covid test because you’ve clearly lost your sense of taste.” – Art Simone on Elektra Shock.

The main challenge involved the queens pitching their own version of yeast spread, that delicious Australasian favourite, in an infomercial and they brought in New Zealand’s queen of selling stuff, Suzanne Paul, to give them advice. She looked gorgeous, as always, and bless her soul, I don’t think she was prepared for the absolute filth that was presented. Kita Mean referenced Divine eating dog shit, you guys! On our public broadcaster!

The runway’s theme was “finest sheila in the bush”, and while it’s not my theme of choice the best looks rank among my favourites of the season, especially Karen from Finance’s Chanel-meets-firefighter drag and Kita Mean’s butterfly look, which fares a lot better than the last time butterflies were on the runway. Elektra Shock walks away with a semi-surprise win, while Maxi Shields falls into the bottom for her bizarre infomercial along with Etcetera Etcetera who was off-mark with both her far too filthy ad and a look with a frustratingly unclear concept.

The lip-sync felt like a bit of a freebie, honestly. Maxi Shields has been a drag queen for decades. She has probably lip-synced to Vanessa Amorosi’s ‘Absolutely Everybody’ no less than 30 times. She also has an inherent joy and warmth to her; you feel better just watching her perform. Etcetera Etcetera is an intelligent queen with high concept looks, but Marie Kondo would kindly usher her off the stage because she does not exactly spark joy. Thus, Shields stays, and Etcetera Etcetera sashays away.

How does everybody else fare, though? Look, I haven’t been a fan of this queen since Snatch Game, which I won’t relitigate. She’s clearly smart and knows her brand. I just don’t think that brand is for me!

One thing I don’t think she knows is how she might come off on camera. This is emphasised, hilariously, when she’s surprised that the other queens think she’s shady. “I don’t see myself as a super shady person”, she says.

This is immediately followed up with this gem of a talking head quote: “I might be a bitch. But at least I tell people what I think and I wish they’d stop thinking I’m the shady queen and start looking at the some of the other girls to realise they’re really the snakes in the room.” Did someone plant a tree? Because I see some shade. 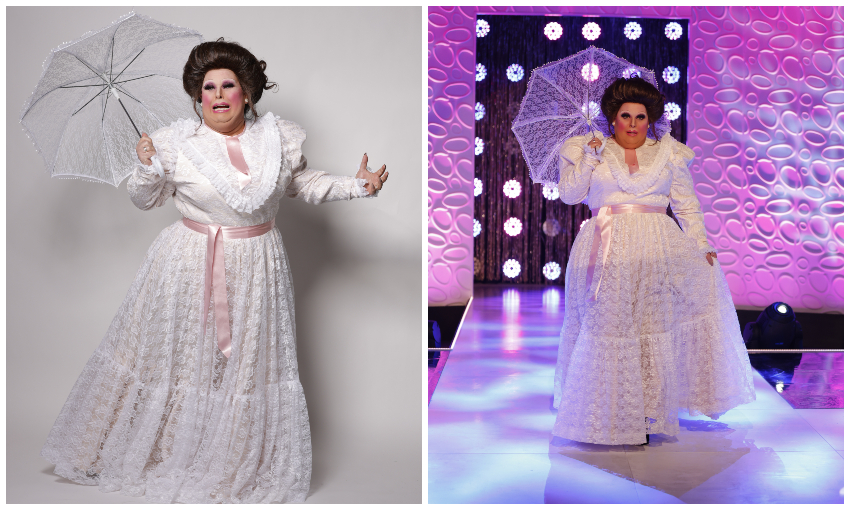 Maxi, I love you. I want to see you in the final. I really, genuinely, thought her Picnic at Hanging Rock drag was so pretty, and she sold it really well. Massive points for actually bringing a microphone to the lip-sync. We love a prop queen, and props, queen! No notes, I love a cork hat, and I wish that she’d done Kath from Kath and Kim as her Snatch Game, because she can clearly do the drag. But honestly, based on her performance thus far, we haven’t seen a super compelling reason why she’s back, even though she’s survived longer than any returning queen has (two episodes). Points for owning up to past ugliness on international TV, because that has to be deeply unpleasant, especially when you consider the general toxicity of this particular fandom.

READ:  Review: Mass Effect Legendary Edition more than lives up to the title

Also points for being one of the first people on the Drag Race runway to ever explicitly reference Priscilla: Queen of the Desert; this look is another flawlessly executed one. It’ll be interesting to see if the scandal follows her throughout the competition, because she’s been consistently in the top, and, barring a stumble, I’d be surprised not to see her in the top three. Her ad was fine – honestly most of them were just fine – but Karen is here for the outfit alone. It’s editorial, it’s political – she explicitly calls out the Australian government’s lacklustre response to climate change – and it’s entirely in tune with her character. Can she notch some more wins though, please? 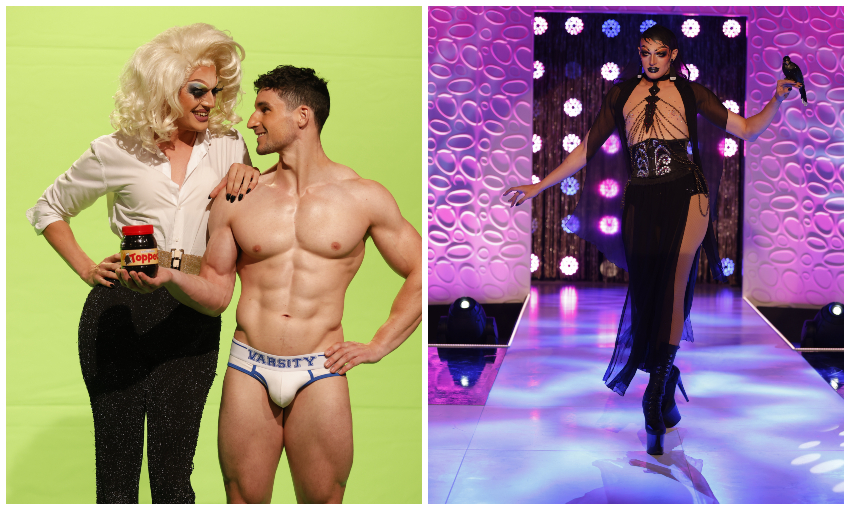 Elektra Shock won the challenge thanks to a great look, and an infomercial that referenced her previous stint in the bottom. It’s nice to see her own that, rather than be defensive about it like we saw last week. Her look is definitely the best she’s ever done, but we’ll see if it can continue for the rest of the competition! How has it taken 13 years to get for us to get a fully explicit dog shit Divine reference on Drag Race? The mind boggles.

At any rate, I would’ve given Kita the win this week. The ad was by far my favourite, and her look felt like something she’d wear onstage, rather than something she’d thrown together for the theme. Most impressively, Kita seems to impress and surprise every episode, and that’s what I want from a drag superstar.

Note: Etcetera Etcetera goes by they/them pronouns out of drag. They go by she/her and they/them in drag. From now on, these rankings will refer to her as she/her in drag, so as not to other her from fellow contestants.

RuPaul’s Drag Race Down Under airs on TVNZ2 at 8:30pm on Saturdays, and drops on TVNZ OnDemand earlier that night.