Property investors at this year’s virtual Property Conference probed the psychologist on all things Covid and working from home. Reweti Kohere listened in as the keynote speaker responded with some home truths.Working from home is a thing now, an acceptable way these days to clock in and out of one’s job without leaving your house…except […]

Property investors at this year’s virtual Property Conference probed the psychologist on all things Covid and working from home. Reweti Kohere listened in as the keynote speaker responded with some home truths.

Working from home is a thing now, an acceptable way these days to clock in and out of one’s job without leaving your house…except you cannot leave because an invisible virus runs rampant outside. Our couches or dining chairs have become non-ergonomic office chairs. Our bookcases have turned into Zoom backdrops for anyone to snoop. We take phone and video calls in our kitchens as we butter sandwiches and fill cups with coffee. Work has ticked along in lockdown but people are not good at coping with the uncertainty that has forced them inside their “bubbles”.

“You have to drive the bus and not be a passenger on the bus,” recommends psychologist Nigel Latta, who spoke via a livestream on Thursday to a virtual conference room full of property professionals, most of whom were watching through Zoom, probably with a bookcase behind them.

The 2021 Property Conference, held for the first time online because of the recent Covid-19 restrictions, seemed an odd space for Latta to scatter thoughts on today’s (and yesterday’s and tomorrow’s) way of working. The conference is one of the pinnacle events organised each year by the Property Council of New Zealand, a lobby group connecting more than 10,000 industry professionals and championing the interests of over 600 member companies, including some of the largest commercial and residential property owners and developers, holding a collective $50 billion stake in New Zealand property.

But even they want to know how working from their homes, which are properties after all, is affecting their psyches. Enter Latta, one of the conference’s keynote speakers, who told property investors to take hold of the wheel rather than hop on for the ride because stressful people “rehearse the misery”.

Only two others, emcee and mother of the nation Hilary Barry, who joked attendees could not complain if the catering was bad, and housing minister Megan Woods, who gave an update on the government’s work to fix the housing crisis, had spoken before Latta. But the two-day conference was jam-packed with a variety of topics – the future of cities, the workplace and the tourism sector, build-to-rent developments and affordable housing, the meaning of reaching carbon neutral by mid-century – all with an overlay of turning adversity into an advantage.

Barry’s enthusiasm masked how property professionals were actually feeling when she asked Latta questions they submitted through “audience interaction made easy” business Slido. You could not blame the news anchor though – besides Latta’s solo opening, the only two people ever on the Zoom screen were her and him. We were watching from our couches, remember?

The pair’s 45-minute Q&A chat covered everything from how working from home has affected different generations, how work-life balance is, in Latta’s words, “not a thing”, and how young people, criticised for not staying in one job for the rest of their lives, have “figured shit out”.

Asked how young people viewed work, 54-year-old Latta said his generation just got on with the job when they were in their 20s, taking it for granted they had to work long hours for not much money and without much, if any, positive feedback. “Younger people now, they want to do meaningful work, they want to be treated respectfully, they want to be fairly recompensed for that. And these are all good things.”

All those good things, once seen as “soft and fluffy”, were what leaders now needed to engage with. Organisations that ensured none of their own lost their job, for example, as the country headed into lockdown last year were benefiting from workforces that stuck around. Latta said building workplace culture was critical, albeit harder to do when video conference calls demanded more from your brain as it tried to decipher social cues and body language through pixels. Once we made it through again, reconnecting could happen in person. “There’s no substitute for getting people in a room. It’s gathering around a fire. That’s what got us from cave days to these days.” 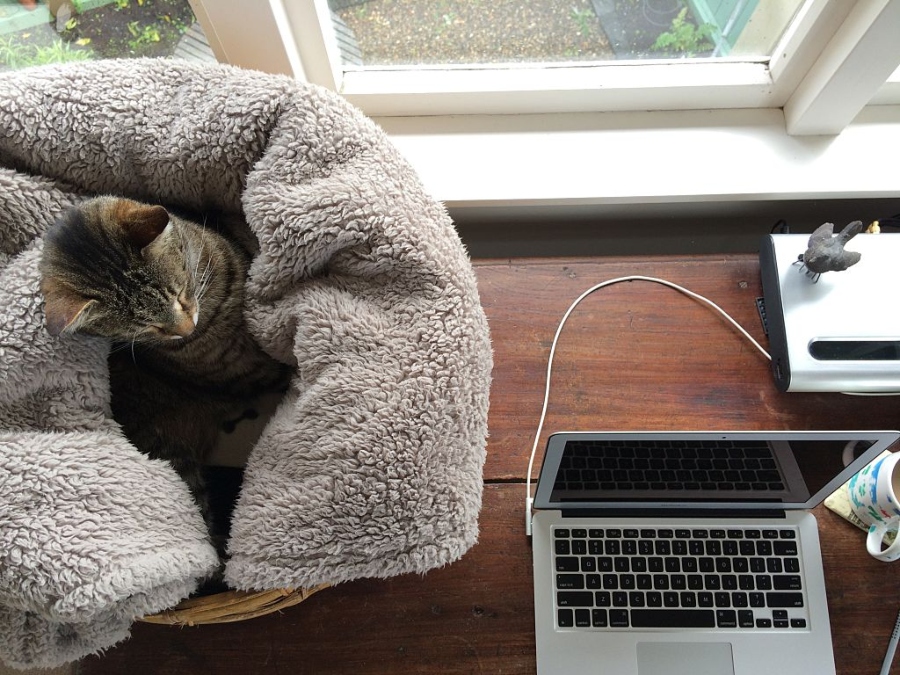 Working from home, alongside your human. (Photo: Getty Images)

Working from home is not so much about generations as it is about individuals. Latta said some people just could not deal with social isolation, and remembered a woman living on his street – “a total extrovert” – who stood at her gate desperately trying to engage people as they walked past. But even the chirpiest, most upbeat among us are becoming bored by the current state of affairs. Everything the psychologist is watching on TV is boring, he said. “Literally, I can’t watch anything, he said. “You just start watching and think ‘it’s boring’. Like, nothing on Netflix. Nothing. Nothing.”

Asked how the pandemic might impact children socially, the psychologist told those parents in the virtual crowd that Covid-19 has offered up a chance to teach their tamariki how to deal with life’s downsides. All children are accepted in choirs these days, he said, including those who cannot sing. “How does it help them in their life to go ‘oh, we don’t want to hurt your feelings, in you go’? They’ll just go through life thinking they can sing and just annoying people around them,” Latta said. “You have to experience disappointment and loss and unfairness and even things like bullying because in life one has to deal with assholes. This is the nature of life.”

How important is work-life balance when working from home, a viewer asked, and did Latta have any strategies for achieving it? The psychologist wanted to find the person who created the term and “slap them just a little bit because it’s such a dick term. Like, it really is because it just makes you feel useless.” He said he had work-life balance once, back in 2004, for about 20 minutes before he lost it. I think it was sarcasm; it is hard to tell over Zoom.

People are “permanently in Sunday afternoon”, having lost so much structure to their days because of the pandemic. Humans are “habit-based creatures”, yet they lack their usual working habits. Waking up, getting dressed, commuting to work, doing the work, travelling home, cooking dinner, watching television, going to bed – “All that stuff is just kind of gone”, Latta said.

Rediscover routine, viewers heard. Wear work clothes instead of loungewear, for instance. Latta advised them to be intentional. “It’s about thinking about ‘if I don’t introduce some sort of rituals and routines into my day, then I’m just going to languish in this big, grey bleurgh’.”

The emcee gave the psychologist a chance to leave everyone with an “uplifting thought and a message of, you know, solidarity”. Instead, Latta gave Barry and property investors a reality check, although “be kind” made its way in. Sure, Latta hoped things would get better, what with Auckland at level three and the rest of the country running at level two. But tougher times were ahead, he warned. The delta variant was trickier, New Zealand’s hospitals have not been overrun by throngs of infected patients, and anti-vaxxers were still an issue.

Just keep being kind. “I know it’s a bit cliche and kind of hokey but it’s true, he said. “Just don’t be a dick, just be nice. That’s my uplifting message – be a little bit kind to each other.”