Two years after opening, less than half of a Māngere birthing unit’s rooms are in use, despite nearby Middlemore Hospital being so overstretched it’s asking new mums to vacate their beds hours after giving birth. “You give birth and then they give you the boot, because the next lady is waiting.”That’s Tevita Talakai, describing his […]

Two years after opening, less than half of a Māngere birthing unit’s rooms are in use, despite nearby Middlemore Hospital being so overstretched it’s asking new mums to vacate their beds hours after giving birth.


“You give birth and then they give you the boot, because the next lady is waiting.”

That’s Tevita Talakai, describing his family’s experience after his wife, Sera, gave birth at Middlemore Hospital to their third child.

Sera says they were told she could only stay a few hours after her birth, and then either go to a Botany birthing unit or back home to Māngere.

“After I gave birth to Lily [her youngest], they said they had a shortage of beds, so I stayed for a few hours and then we went home, as they had other women waiting. I felt well enough to go home, but having another option would have been great.”

Sera had a similar experience with her second child, and had hoped to stay at the Nga Hau Māngere Birthing Centre that opened two years ago around the corner from their house.

“When I saw it being erected, I thought ‘great – so close to home’. But my midwife advised me that we should birth at Middlemore, as the birthing centre hadn’t managed to get a contract with the DHB.” Kileigh-Marie Grimmer, left with her newborn, and Sera and Tevita Talakai with their three children. (Photo: Supplied)

Women who are deemed to have a low chance of complications, and have a midwife with an access agreement at Nga Hau Māngere, can give birth for free at the centre. But given only seven of the 20 rooms are in use, spaces book up quickly.

Māngere Bridge resident Kileigh-Marie Grimmer is one such mum. Her daughter Autumn-Rose was born on April 5 at the centre, and she says after such a distressing birthing experience with her eldest child, she was determined to get a midwife who could book her into the Māngere unit.

“I had my first child at Middlemore. Only a couple of hours after my birth, I was told I had to move to Botany [the district health board’s closest primary birthing unit]. I didn’t want to travel and I wanted more time to bond with my child so it was pretty traumatising.

“This time around it was absolutely wonderful. I had a water birth and as soon as she was born, we were able to have that skin to skin contact. We were also able to have family come and visit. It was amazing.” 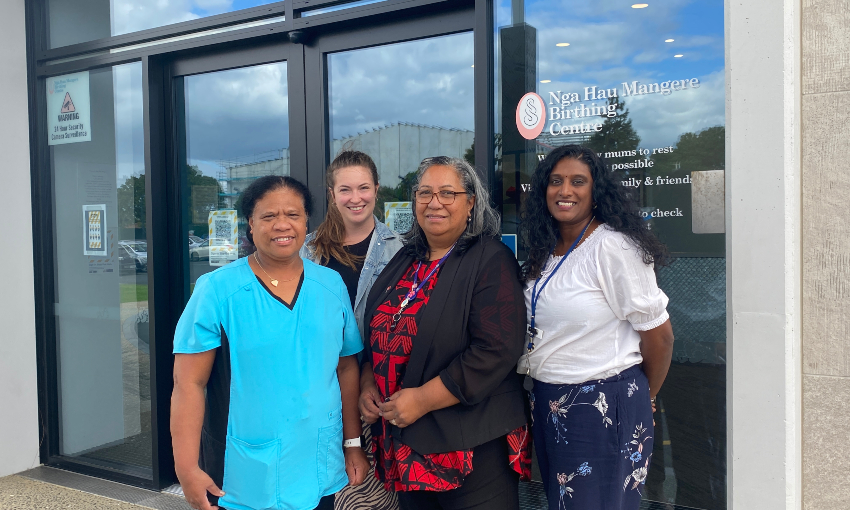 “If we had public funding, we could fund more staff and use the full facility, but we’re on a limited budget so we can’t let everybody come.”

New mums from central Auckland can stay at for free Birthcare in Parnell for two nights, thanks to funding from the Auckland DHB, and Taihia says they are advocating for a similar agreement to be made with Counties Manukau.

”Ideally, Nga Hau Māngere would get [a contract with] Counties Manukau to lease rooms so more women could stay for free if they chose to.”

Prior to her current role, Taihia worked for Counties Manukau DHB for 22 years and says the need for a primary birthing unit in the Māngere area has been known for a long time.

“For years lots of midwives were saying we needed a primary unit in Māngere, because there’s not enough beds at Middlemore, and then along comes the Wright Family Foundation, who saw the need, built the centre, and then applied for a contract, but they were told no.”

Taihia hopes the recently announced Health NZ reforms mean facilities like hers can offer a solution to Middlemore’s stretched resources.

“Our families can’t afford to be treated in a way where they begin family life with such trauma and stress due to under-resourced conditions.”

In response to enquiries about why the Counties Manukau DHB isn’t contracting to Nga Hau Māngere, the DHB noted that it already has primary birthing units in Botany, Papakura and Pukekohe. Due to these existing facilities, paying for more services is not possible at this time, a spokesperson said.


“Any agreement to use a private provider for any outsourcing of any public maternity services would be considered only after a government sanctioned procurement process was undertaken. [And] we have not needed to undertake any such process as we currently have a number of primary birthing units.”

Chloe Wright, founder of the Wright Family Foundation, doesn’t regret building the facility, despite it not getting the funding they hoped for.

“There is such an incredible need in South Auckland and the women there do not get the care they have a right to expect. [Building it] was a bold move and perhaps rather a naive move, but not one I regret because it has made a massive difference to the lives of those women who have been able to stay at Nga Hau.” There have been 400 births at Nga Hau Māngere Birthing Centre since its opening in 2019. (Photo: Justin Latif)

READ:  Drag Race Down Under power rankings: No i in drag queen

But it seems change could be in the pipeline.

During an announcement for a new South Auckland-based spinal rehabilitation unit, minister of health Andrew Little said a key part of the Health NZ reforms would be to look at taking pressure off hospitals and moving more care into the community.

“One of the problems with the system at the moment is that we struggle to take good ideas from one DHB and push it out into other DHBs. [Therefore] pushing services out into community settings can better serve the needs of those who need help.”

Regarding maternity services in particular, his office said ensuring “we can more easily keep people well closer to home” will be a major driver of the reforms: “When Health NZ and the Māori Health Authority take responsibility for commissioning care in each community – including community maternity services – they will consider whether the mix of services currently funded in each area ensures equitable access to care, working with communities and iwi. This will inform decisions about whether increased investment in specific services, like community-based birthing units, are needed.”

“For a population like South Auckland, which has a high fertility rate, we know that when well-women access these [community-based] facilities they have much better outcomes and less unnecessary interventions, compared to when we put women into big tertiary hospitals.

“But what we’ve got at the moment is a postcode lottery around whether women can access facilities close to them or not. Because DHBs have been under the pump financially, they’re trying to keep contracts down and that makes it harder for privately owned birthing centres to remain viable, so a national approach would be ideal.”