‘The next week is going to be pretty tough,’ church spokesperson Jerome Mika tells Justin Latif. With an increasing number of people connected to the Assemblies of God (AOG) Church of Sāmoa requiring hospital care, people of faith are being called on to keep the Covid cluster in their prayers. There are now 332 people […]

‘The next week is going to be pretty tough,’ church spokesperson Jerome Mika tells Justin Latif.

With an increasing number of people connected to the Assemblies of God (AOG) Church of Sāmoa requiring hospital care, people of faith are being called on to keep the Covid cluster in their prayers. There are now 332 people linked to the church who have tested positive for the delta strain, and church spokesperson Jerome Mika warns there could be some “not so good” news in the coming days.

“The next week is going to be pretty tough for the church,” he said. “We’ve got people in ICU and in hospital and the best-case scenario is we see them all recover and get well, so we’d appreciate people of faith to be praying for them.” While Mika couldn’t reveal how many are currently in hospital, he said members will be holding a series of prayer vigils for those needing intensive care. “We’re hoping for the best but also expecting not so good things to happen.”

The cluster emerged out of a combined rally, attended by more than 500 people, with several other churches attending. The event was on Sunday August 15, two days before the first delta community case was detected and the country placed in lockdown. Racist abuse directed at the church last week saw the community feeling “pretty stressed and overwhelmed”, Mika told The Spinoff.

Mika said he was surprised  to hear Judith Collins accusing him of issuing “personal attacks” on behalf of the Labour Party after he told a reporter that no one from the church had heard from her. “Who is this Pacific leader?” the National leader said in parliament yesterday. “Oh — the vice president of the Labour Party, Jerome Mika! Oh, also, the Labour Party candidate in 2014 in Papakura, who came second. So that’s the level that they stoop to.”

READ:  Why some people get name suppression – and others don’t Mika said he was disappointed by the comments, which included Collins erroneously suggesting, “Stuff has now removed that story from their website, because they’ve finally worked out that they were sold a pup.” But given his deep ties to the church – his father is currently a minister for the church’s North Shore congregation – he’s confident most Pacific people would understand his role isn’t political. “I was asked a yes or no question by a reporter whether Judith had contacted me, to which I said ‘no’, so it wasn’t an attack on her. It’s just a sign of a desperate politician trying to validate her Pacific credentials. I’m the son of an AOG minister and I hold a number of roles in the South Auckland community so I’m not doing this for the Labour party.”

The government has just announced a $26 million boost to support Pacific communities with this current outbreak. Associate minister of health Aupito William Sio said the investment would allow for more targeted support which will be funneled through Pacific health and disability services. “E fofo e le alamea le alamea, the solutions for our challenges lie within communities. I am proud of our Pacific providers, leaders, communities and aiga for stepping up to each play their part in keeping us all safe,” he said.

Since the first lockdown, The Fono has been one of the lead agencies supporting Pacific people who have Covid or are self-isolating at home. The Auckland-based Pacific-led social services provider supports those referred to them through the Auckland Regional Public Health Service and its whānau ora manager Europa Kupu said her team find the work “very rewarding”.

“We’ve been supporting families with food support, financial assistance and also have a mental health team who are able to triage them regarding the stress of being in isolation,” she said. “It’s been quite sad at times, as some families have had to be split up so some could go into isolation while others have to stay at home. We had one situation where a 19-year-old had to look after three of her younger siblings at home while her parents were in MIQ.” 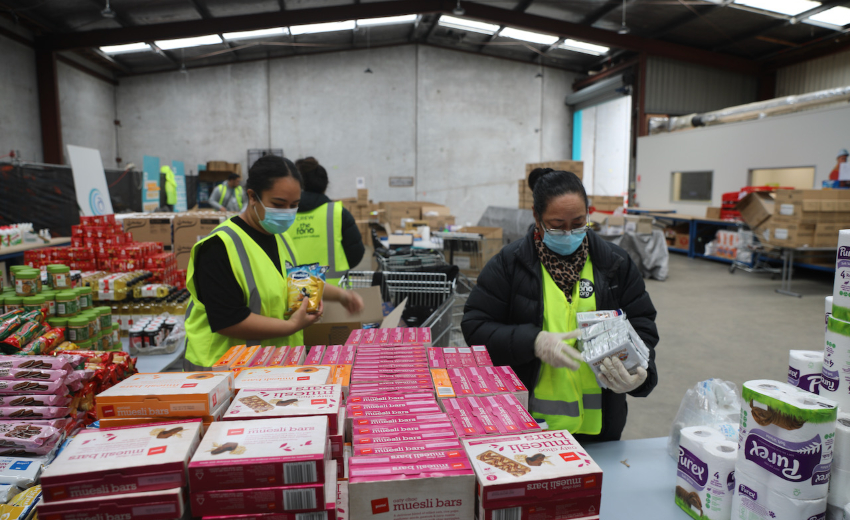 The Fono’s staff preparing deliveries to families currently in isolation due to Covid. (Photo: Supplied)

Along with helping pay the bills, delivering essential items and doing daily welfare checks, the organisation has also been providing those in MIQ with children’s games and traditional Pacific Island food. “Sometimes the food that the hotel serves isn’t what our elderly are used to, so they have asked for Pacific food, like corned beef and tuna and things they can cook themselves. It’s these little things that can make their stay more manageable.”

Despite the extra risks posed by the delta variant, the team are passionate about supporting their fellow Pacific community through this time, said Kupu. “Our workers really go above and beyond the call of duty to get the packages there and just call them up and see what else is needed. It’s very rewarding work, especially when we see how grateful people are and to hear their kids are happy.”

For Mika and the church cluster, the focus remains ensuring the growing list of contacts are traced and all unvaccinated church members get a jab as soon as possible. “I’m working with the church on its contact lists, connecting them with social services and we’ve also set up two testing stations for members. And we should have a better idea of the extent of the outbreak soon.”

READ:  Signs of slowing in the housing market
Shares
Share This
Finance Advice 2021