The Bulletin World Weekly is a Spinoff newsletter covering and analyising the most important stories from around the globe. This week’s edition looks at the historic roots of the current violence sweeping through Israel, Jerusalem and Gaza.

To get the Bulletin World Weekly in your inbox every week, sign up to The Spinoff Members.

The historic tragedy of Jerusalem behind the crisis in Israel

History erupts into the news cycle no more so than in Jerusalem.

The crisis triggered in Jerusalem can be seen as a chain of cause and effect dating back to the foundations of the three Abrahamic religions, Judaism, Christianity, and Islam. It dates to the 1967 Six-Day War in which Israel claimed Jerusalem, and the 1948 declaration of the state of Israel, and what Palestinians call Al-Nakba “the catastrophe”, and the collapse of the Ottoman Empire after World War One.

It also has current roots in Israel Prime Minister Benjamin Netanyahu’s fragile position after another inconclusive election and his indictment on corruption charges. He’s never seen a crisis he couldn’t try to turn to his advantage, often by deploying overwhelming military power (Haaretz, paywall). Equally, the Palestinian side is riven by vicious disputes between Hamas and Palestinian Authority led by the Fatah successors to Yasser Arafat, founder of the Palestine Liberation Organisation and the face of the Palestinian struggle.

Add in Iranian influence through which Tehran can fight asymmetric war through Palestinian and probably soon Lebanese and Syrian proxies and you have an extraordinary conflagration into which locals, Israelis, Palestinians, soldiers, guerrillas, civilians, fundamentalists, extremists, and moderates all risk being drawn into.

We tell our own stories

Like an earlier column on genocide and apartheid, the crisis on the ancient streets and pre-Roman cobblestones of Jerusalem is a difficult one to describe in ways that satisfy the entrenched positions about Israel, the Palestinians, Jews, Islam, justice, and injustice.

Jerusalem is central to the stories Jews, Christians, and Muslims tell about themselves. Each religion treasures its locations and myths. Over the centuries each religion has tried at various times to assert dominance over the holy city, driving rivals out at the point of swords or pikes, or today arguably through the Israeli legal system which doesn’t recognise Palestinian claims.

A great book that tackles this history of claim, ascendency, destruction, coexistence, colonisation, and crisis is Jerusalem: The Biography, by British historian Simon Sebag Montefiore, who is part of one of the most famous Jewish families of the city.

“For 1,000 years, Jerusalem was exclusively Jewish; for about 400 years, Christian; for 1,300 years, Islamic; and not one of the three faiths ever gained Jerusalem without the sword, the mangonel or the howitzer,” Sebag Montefiore writes in the book.

It’s that understanding of the impossibility of sole ownership that has made Jerusalem a flashpoint since the foundation of Israel. It’s why most countries declined to move embassies to Jerusalem or recognise it as Israel’s capital even if that’s the reality on the ground.

Netanyahu got Donald Trump to agree to move the US embassy from Tel Aviv, a big win for Bibi and for extreme Israeli nationalists, as borne out by this quote (paywall) from Netanyahu ally Itamar Ben-Gvir of the far-right Jewish Power Party that “it is time to liberate the Temple Mount and Jerusalem, and show them who owns the house once and for all”. 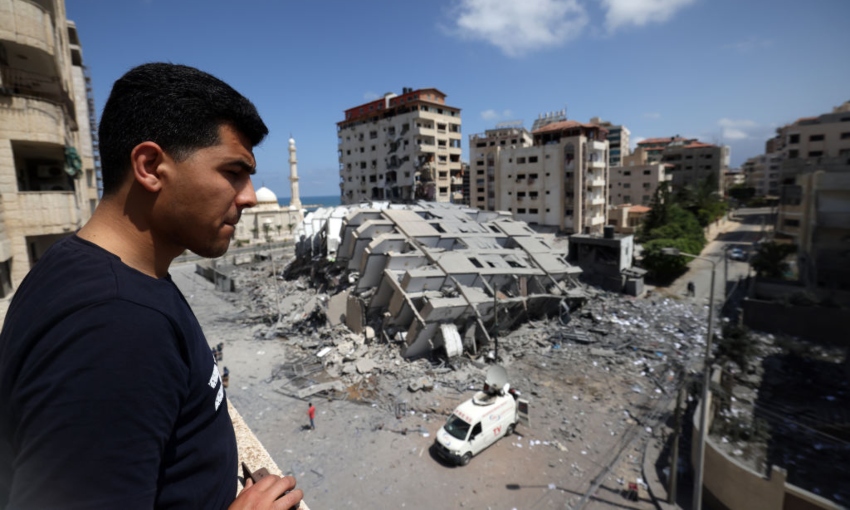 A Palestinian man surveying rubble in Gaza after Israeli airstrikes, made in response to rocket attacks from Hamas (Photo: Majdi Fathi/NurPhoto via Getty Images)

Before the rockets from Hamas and retaliation from the Israeli Defence Force this week, the focus was a tiny neighbourhood – a collection of a few houses and families – in east Jerusalem. Israeli courts have determined that the families who have lived there for decades are in fact occupying historically Jewish homes and must leave.

Sheikh Jarrah, that suburb and those houses and streets have been the spark that has rippled out to the most sacred ground of both Islam and Judaism: the Temple Mount to Jews and the Al Aqsa Mosque on the Haram ash-Sharif to Muslims, the third-most sacred site in Islam. It’s the platform on which the second temple stood before it was destroyed by Rome in 70 AD – leaving what Jews know as the Wailing Wall beside the Al Aqsa.

READ:  Will Jacinda Stand? Or, Has She Already Fallen?

Here’s part of an explainer from the liberal Israeli newspaper Haaretz (paywall), to explain the significance of Sheikh Jarrah and those Palestinian families:

‘In 1876, Jerusalem’s Sephardic and Ashkenazi communities bought a plot of land near the tomb of Shimon Hatzaddik, a Jewish high priest from ancient times. A small Jewish neighborhood was founded on part of the land.

‘In most cases, Jewish refugees received compensation for the property they left behind. In 1956, the Jordanian government and the United Nations built 28 small homes at Sheikh Jarrah, east of the line, to house Palestinian refugees.’

Displaced Palestinians are not eligible for compensation.

Here’s an explanation from the Qatar-owned but generally straight-reporting Middle East Eye about the use of Israeli law to force evictions of Palestinians decades after the Nakba:

‘Since Israel occupied East Jerusalem in the 1967 war, Israeli settler organisations have claimed ownership of land in Sheikh Jarrah and have filed multiple successful lawsuits to evict Palestinians from the neighbourhood.

‘Four of the area’s 38 families are facing imminent eviction, while three are expected to be removed on 1 August,’ Middle East Eye reported.

The Al Aqsa mosque and surrounds is sacred space. Former right-wing Israeli leader Ariel Sharon knew this and gambled with it when he took a heavily guarded walk around the terrace in 2000. Now Netanyahu has sent troops onto that sacred ground.

‘The riot police inside the holy sanctuary this week cross a dangerous line,’ Financial Times columnist David Gardner wrote (paywall) of the crisis in Jerusalem. ‘A conflict ostensibly over land is acquiring menacing religious overtones that encourage a collision of irreducible identities in a region with no shortage of fanatics.’

Raja Shehadeh, whose book ‘Palestinian Walks: Forays into a Vanishing Landscape’ is a poignant story of the loss of Palestinian territory, wrote in the New Yorker: ‘The Israeli government’s Jerusalem policy has become untenable. As the governments of Israel have moved further to the right, and become more influenced by hard-line settler groups, the inequities have become increasingly glaring. Deepening frustration among Palestinians has led to increased violence.’

READ:  A year on from near death and the $1 deal, Stuff is somehow thriving

Inevitably, every action requires a reaction. Palestinian protesters staged an almost visceral defence of Al Aqsa. Now the Hamas leadership that rules in the Gaza Strip has launched rockets into Israel, a classic asymmetric response, which then triggered an overwhelming military reaction from Israel that quickly clouds the original crisis in Jerusalem.

Few come out of all this innocent or good, other than the victims: Palestinian families in east Jerusalem subject of the eviction orders, or the children and civilians in Gaza, the West Bank, and Israeli towns within range of Hamas.

A hard story to read

Of course, there are critical issues with how the crisis in Jerusalem and now everywhere Palestinians and Israeli’s face each other is reported in world media.

Middle East Eye produced an effective glossary of how the news media can use words that imply some equality in scale or impact between attacks or the motives of each side. Writer Alex MacDonald noted: ‘Few topics can stir up powerful emotions more than relations between Israel and Palestine, and the use of language relating to the situation is hotly contested.’ He went on to look at “clashes”, “extremists”, “Zionists”, and even “Islam”.

BuzzFeed reported that Instagram wrongly took down content with an Al Aqsa hashtag because it had triggered some association with words related to terrorism.

I found this podcast from The Economist with an interview with its Israel correspondent Anshel Pfeffer valuable. Pfeffer tweets at @anshelpfeffer. The BBC’s Middle East editor Jeremy Bowen wrote this solid explainer.

We’ve seen many people watching the escalating conflict between Israel and the Palestinians and asking ‘why now?’. We made this video to try and unpack some of the reasons. Produced by Briony Sowden. https://t.co/oYdTljrpCg pic.twitter.com/DgsR7WqJLT

To get the Bulletin World Weekly in your inbox every week, sign up to The Spinoff Members.