To celebrate 10 years of Parrotdog, The Spinoff is partnering with the brewery to share the stories of New Zealanders doing great things. In the first series of Birdseye View, we’re interviewing 10 interesting Aucklanders about their relationship with the city and how it shapes their lives. To kick us off, Charlotte Ryan tells Simon […]

To celebrate 10 years of Parrotdog, The Spinoff is partnering with the brewery to share the stories of New Zealanders doing great things. In the first series of Birdseye View, we’re interviewing 10 interesting Aucklanders about their relationship with the city and how it shapes their lives. To kick us off, Charlotte Ryan tells Simon Day where she goes to find peace – and how she’s striving to create the perfect five hours on Music 101.

Monday is Charlotte Ryan’s Sunday. While the rest of the city gets back into the grind, it’s her time to rest, to reset.

Ryan is the host of Music 101, the acclaimed Saturday afternoon show on RNZ that devotes five hours to a diverse catalogue of musical genres across interviews, live performances, reviews and documentaries. For Ryan, every show is the culmination of a week packed with music – listening to music, reading about music, talking to people about music – and she leaves the studio both exhausted and high on adrenaline. Like she’s just finished a gig.

Monday is different. A day of quiet. She’s got a few special spots around Auckland where she finds solace. The summit of Maungawhau. Digging in her garden in Eden Terrace. The Monday I hung out with Ryan we met at Open Coffee on Karangahape Rd for her morning “real coffee” (at home she’s got a jar of Moccona). Then, on a stunning winter afternoon, the month before the delta outbreak threw Auckland into lockdown, we visited Herne Bay beach.

This is where she goes to invest in her wairua, to enjoy Auckland in comparative peace. Walking along the beach with her daughter, Annie, Ryan is a picture of contentment. She loves her job. She feels lucky to live and raise a child in a city like Auckland and a country like Aotearoa. “I like being by the water. I love the climate. And I love the people, I’m a lot closer to diversity here,” she says.

A week earlier, when I arrive at RNZ’s central Auckland studio on a Saturday afternoon, Ryan is bouncing to the stormy sound of Troy Kingi and Delaney Davidson’s Black Sea Golden Ladder. She’s just played an interview she recorded with Mara TK earlier in the week, exploring TK’s mental health and the way he was able to find his way out of a dark space through the support of a Māori therapist and making music.

The conversation captures the spirit of Music 101, Ryan reckons – a space for musicians to share their personal stories as well as discuss the motivations and meaning behind their art. It also captures Ryan’s vibe as a broadcaster. Intensely curious, she listens closely to her guests, gently shaping the dialogue while letting them lead the conversation. Absent any palpable ego, her obsession focuses more on the musicians, and on the show. 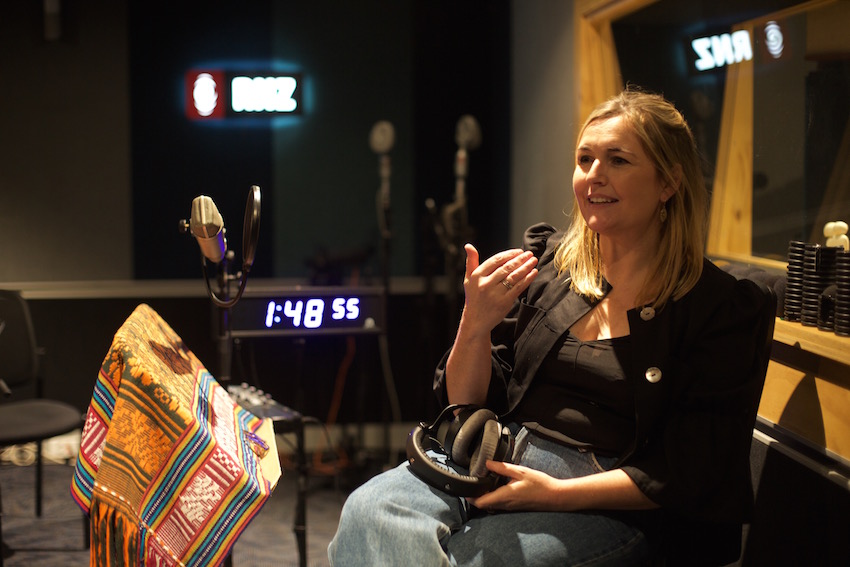 Two years after she took over the programme, Ryan thinks she has finally nailed the Music 101 mix. “It took me longer than I thought it would to find my groove. But once I did, the most awesome interviews are coming to me,” she says.

“My goal for Music 101 was to make it more accessible. If you want to learn about music, or get back in touch with it, or be introduced to new music, this is the show for you. The audience is really open to anything. Whatever you play, if you contextualise it and explain it, you can take people with you.”

As host Ryan juggles the roles of journalist, critic, fan and music lover. While she’s deeply knowledgeable about music, the show never feels intellectually exclusive or too cool. She’s warm and welcoming and it means guests are willing to open up to her.

Putting together the five-hour show is like creating a set list. Each week Ryan attempts to create a flow, an expedition through music that provides different insights throughout the show’s different parts.  “I’m searching for different vibes and energy all the time,” she says. “The show is like a peak every week. It wears me out. I joke with musicians that it’s kinda like a gig.”

On the Saturday I spend at the studio the show begins with an interview with the Doors’ drummer on the 50th anniversary of LA Woman, features a live performance from Louis Baker and the Auckland Philharmonia Orchestra (an excuse for Ryan to share her affection for the sound of an orchestra tuning up), and then reveals the sensitive romantic side of Newsroom journalist Emile Donovan though his selections for The Mixtape.

The following week she was travelling to Christchurch to record interviews for the 40th birthday of Flying Nun. And she’s excited to have a call with Lorde about her new album Solar Power. “It’s a fucking cool job. There aren’t many music journalists left.” 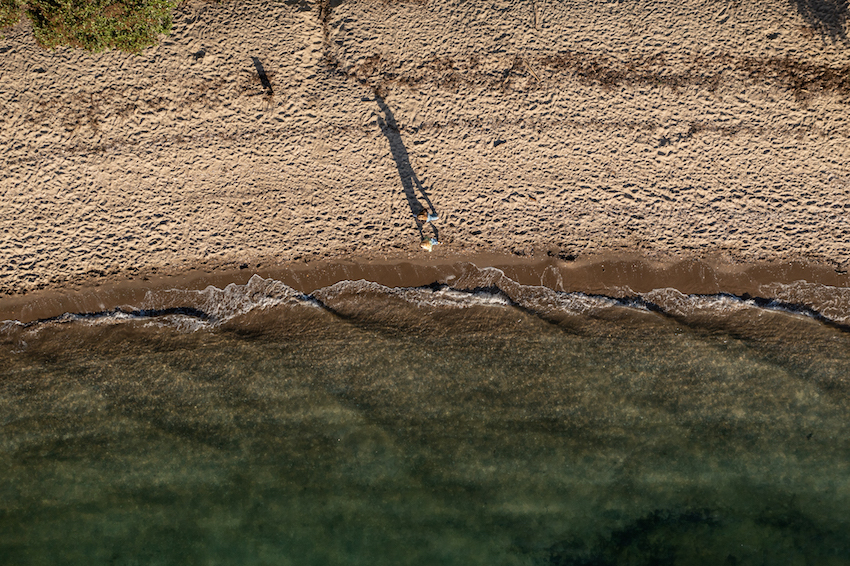 Ryan is a Christchurch native (she went to school at Villa Maria College). She always loved music and desperately wanted to be involved in broadcasting. While studying for a bachelor of education and sociology at the University of Canterbury she spent her spare time hanging around student radio station RDU and alt-station Channel Z, which had a base in Christchurch at the time.

“There’s lots of us in the music industry who love music so much but aren’t musicians, so we surround ourselves with music,” she says.

After graduating Ryan took a job as brand manager at RDU. Four months later she was poached by bFM – Auckland University’s famously cool and rogue radio station. Twenty years later she’s still in Auckland, and her career has taken her across the music industry and the media.

She left bFM to manage Shapeshifter and Ladi6 then worked at record labels as a publicist. When her daughter was born she took a year off before launching her own publicity company working with everyone from her friend Lawrence Arabia to legendary American soul singer Roberta Flack.

Throughout her career, however, Ryan has been drawn back to broadcasting. She returned to bFM to take over as the five-day-a-week host of Morning Glory. Her time at the station marked a moment when b’s infamous reputation for parties, drugs and high profile male hosts went from untouchable to problematic. Amid that reckoning, her presence, a progressive and thoughtful voice amid a murky tide, was never more valuable. In 2012, after four years at bFM, she moved to Kiwi FM, where she stayed until the station closed three years later.

Over more than a decade she had carved a prominent space in a music industry too often defined by a misogynistic culture, her knowledge, talent and ambition wrapped up in a rare enthusiasm and universal warmth for everyone she meets. Along the way she watched criticism of bFM’s culture and its treatment of women ignored. (Earlier this year she wrote about the New Zealand music industry’s #MeToo reckoning.) And then MediaWorks pulled the pin on Kiwi FM. She left the radio. ‘It took me longer than I thought it would to find my groove.’ Photo: Simon Day

Ryan moved from behind the mic to in front of the camera on TV3’s Paul Henry show. It was a huge amount of fun, she says, complete with vigorous exchanges with the likes of Winston Peters. But eventually the 3.15am alarms took their toll, affecting her mental and physical health. She was concerned about the impact it was having on her role as a parent. So, against the (unsolicited) advice from industry insiders about never giving up a high profile position on TV, she quit.

David Bowie had just died and she felt herself pulled back to music, to musicians. Ryan took the role of Neil Finn’s assistant. The title underplays the work she did. She was part of his management team, looked after Roundhead Studios, toured Australia and New Zealand, oversaw Finn’s businesses and charities, and worked with him on three albums.

“The stuff I learned with Neil was amazing. A special part was streaming the making of his Out of Silence album live to the world. I helped produce this – and it was huge. That meant organising all the singers and coordinating the filming, lighting and streaming to a live audience.”

She also got to go on tour with Fleetwood Mac when Finn was asked to join the band. The opportunity to travel with a group that huge was an experience she hadn’t expected to be a part of her career. Her lasting memories include dancing with Christine McVie at the New Zealand tour party at Roundhead, and a random encounter at the LA show.

“I was backstage and I was on cloud nine. I was walking towards this group of people and there was this one person smiling at me, and I thought that person and I really connected. And then as we got closer I realised it was Harry Styles. I got a tingle. You knew he had the X factor.”

After four and a half years with Finn, broadcasting called again. “I find musicians fascinating and I love communicating with them.” 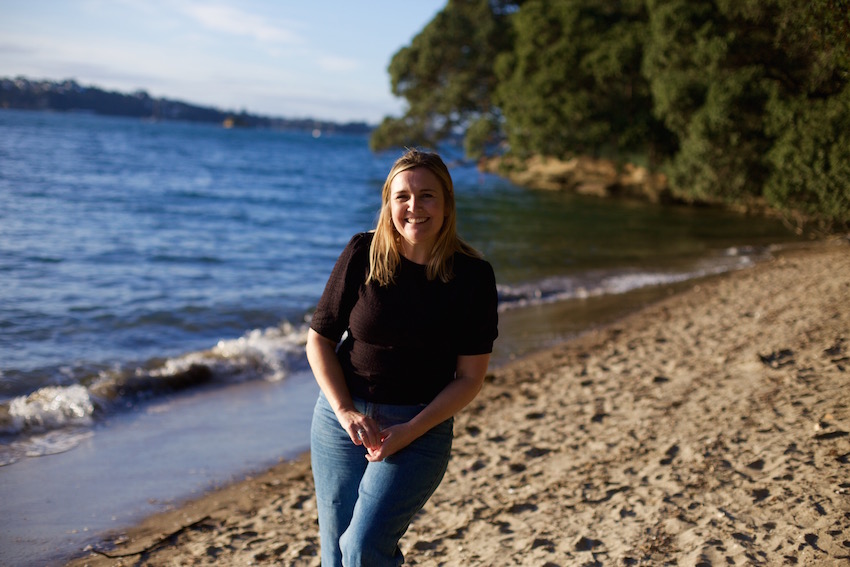 “I like being by the water. I love the climate. And I love the people.” (Photo: Simon Day)

The first time I met Charlotte Ryan was on the dance floor at a 40th birthday afterparty in the last days of summer earlier this year. Her presence made for one of the most intimidating Spotify DJ gigs I’ve been in charge of. I started questioning my natural instincts. I knew Justin Bieber’s ‘Sorry’ would make the dance floor pop off, but was it cool enough for the host of Music 101?

I needn’t have worried. She’s the opposite of a music elitist (although she admits as a young woman she got kicked out of bars for complaining to the DJ).

“I’m really not a music snob at all. I have to interview so many different people.”

Ryan acknowledges people’s relationship with music is intensely subjective and intimate. She sees her role as tapping into that emotional relationship. With the intensity of the news cycle over the last 18 months, she has tried to give people a place to escape. This is never more important than in lockdown. “My energy on the show changed hugely last year. I’m interested in music psychology. I know that when people are sad they want some nostalgic music,” she says.

“I did this thing where people could ring up and request a song for a loved one who they couldn’t see. Then I did music to make you happy in the third week of lockdown.”

Music 101 continues to broadcast through Auckland’s level four lockdown. She prepares for the show from her kitchen table looking out to her garden and goes into the studio to record. A news addict well before Covid-19 arrived, Ryan has deliberately tried to disconnect from the constant stream of headlines. RNZ was always on in the house (she’s got a passion for the hourly pips).

“I’ve realised now, [I need] to give myself time away from the radio – walks, lying on the couch listening to records – like we did when we were teenagers – reading, gardening, talking with friends and family.”

Ryan believes music is more important than ever during this challenging time. It gives people a chance to remove themselves from the world and to share their feelings with others despite our forced distance, she says.

“Music is such a comfort for many of us, and a great way to connect, and feel all sorts of emotions.”

READ:  How Covid-19 messed with our sleep
Shares
Share This
Finance Advice 2021