If we’re to avoid the failures of other countries, Aotearoa will need to raise its vaccination rate far above the plateaus the US and UK seem to be stuck on. Bernard Hickey looks at how ‘nudge theory’ could help us get to 90%.Follow When the Facts Change on Apple Podcasts, Spotify or your favourite podcast […]

If we’re to avoid the failures of other countries, Aotearoa will need to raise its vaccination rate far above the plateaus the US and UK seem to be stuck on. Bernard Hickey looks at how ‘nudge theory’ could help us get to 90%.

There’s a saying that everything looks like a nail to someone with a hammer. Politicians and bureaucrats can easily slip into the same trap, assuming that every big societal problem can be solved with a new law or tax change or a big new spending programme. When actually, sometimes all that’s needed is dozens of small nudges and tweaks. And a whole lot of A/B testing.

In the coming months, Aotearoa faces its biggest public policy challenge and existential threat since that third week in March last year when we made the right decision to lock down hard and early to eliminate Covid-19, rather than just suppress it. That was a massive call that required all sorts of emergency law changes, emergency spending and restrictions on our freedoms. It was the biggest nail, and luckily, we used big hammers, and collectively swung them hard.

The Covid-19 challenge we face now is different, but the stakes are potentially even higher. Elimination worked for our health and our economy, but at some point we’ll have to open up and we need to be able to cope with outbreaks. That means having a double vaccination rate with Pfizer high enough to get some sort of herd immunity protection, or at least as high as possible to minimise the number of hospitalisations and deaths of non-immunised citizens.

That looks like it might be harder than we think. Those countries that have been vaccinating for more than six months seem to be now reaching plateaus of 50-60%. Sadly, the delta variant of Covid-19 has ripped through the unvaccinated in the last month. Hospitalisation and death rates are lower in America, Europe and the UK than during the first waves last year, but the toll on the unvaccinated is awful. The WHO and the US CDC described the latest wave as a “pandemic of the unvaccinated”. The United States’ fully vaccinated rate is stalling below 50% and Britain’s is slowing as it gets closer to 60%.

Border workers’ families were among the first to be vaccinated under the Pfizer vaccine rollout on March 10, 2021. (Photos: supplied)

Surveys show we in New Zealand are more willing to get the vaccine than the British and Americans, but there is already a deficit in vaccination rates among Māori and Pasifika that some worry could turn into a dangerous gap towards the end of the year. As of the last official survey by Horizon Research at the end of May, the proportion of the adult population who say they’re likely to get vaccinated has increased to 80% from 69% in March. That includes those already vaccinated at least once and is mostly due to a halving of the “total unlikely” and “unsure” camps.

However, we should be careful about assuming everyone who says they’re willing to be vaccinated actually get vaccinated. The much lower than expected, or needed, proportion of border and maritime workers getting vaccinated has been so unnerving that the government decided last week to make vaccination compulsory for the 1,800 border workers who had yet to be vaccinated. One particularly weak area was port workers in more remote regions. Many are reportedly difficult to contact, schedule for and to find time for vaccinations. The sheer logistical challenge of locating people, communicating with them, arranging for them to be in a certain place at a certain time, and then monitoring them after vaccination has been harder than many expected.

People working shifts and feeling unable to leave work, family or their communities to go into unfamiliar and sometimes unwelcome places has held back many from vaccinations.

The temptation is to make vaccination compulsory, to fine people, or to pay people large sums to be vaccinated. However, not many of those things have actually worked to lift vaccination rates in the past, and sometimes have been counterproductive.

So how do we ensure a 80% plus vaccination rate? There’s a clue in KiwiSaver.

Perhaps, a series of nudges, rather than big carrots or sticks, will do the trick. We have actually proven so-called nudge theory can work to encourage the public do something that is at least initially painful, but in their own best interests and the society’s best interests in the long term.

One of the best examples of nudge theory, or behavioural science or economics, in action is here in New Zealand, in the form of KiwiSaver. Finance minister Michael Cullen presents the budget in 2007, the year that KiwiSaver was introduced. (Photo: John Nicholson/Bloomberg via Getty Images)

When I returned to New Zealand in 2004 after 10 years working in Australia, Britain and Singapore, I was surprised to see the state of the debate about pensions and savings. All we had then was NZ Superannuation and no tax incentives for savings, unlike in Australia and Britain where there were tax incentives in exchange for the compulsion in my savings. Back in 2004, there was a debate about how to adopt something like the Australian scheme, which exempts compulsory contributions from income tax and means most of the A$22b per year of income tax concessions granted by taxpayers at large go to the richest and heaviest savers. Australia’s private pensions schemes are now worth over A$3 trillion and it could be argued have funded the massive investments in business capital over the last 30 years that make Australia more productive, while lifting its wages 30-40% higher than ours.

READ:  The poor treatment of sexual violence victims in court runs deep in our history

Aotearoa briefly adopted a similar compulsory superannuation savings scheme in 1975 under the third Labour government that would have forced workers and employers to save up to 8% of their income. Savings would have been tax exempt going into the scheme, and untaxed while in the scheme, but then taxed when they were withdrawn. If the scheme had stayed, Infometrics estimated in 2014 it would have been worth $300b by then. Instead, the scheme was dumped later in 1975 by the new National government under Robert Muldoon, who campaigned with a “dancing Cossacks” television cartoon targeting the scheme as a slippery slope towards Communism. The scheme would now be worth $1.3t if it was still in place.

So there was quite the debate in 2004 and 2005 about what to do. Should such a scheme be compulsory and would that mean tax breaks would have to be granted to compensate for the compulsion? In the end, the fifth Labour government of Helen Clark and Michael Cullen chose a very ‘third way’ solution, which was to build a nominally voluntary savings scheme that used ‘nudge theory’ to get most New Zealanders into it and saving regularly.

Make it easy and decision-free

KiwiSaver was cleverly designed as an “opt-out” scheme where employees starting their first job were put automatically into a default scheme along with a $1,000 kick-start from the government. Then the IRD collected a portion of that worker’s revenue in the same way as PAYE and put it into the scheme, along with a once-a-year tax credit initially worth $1043 per saver. It was the perfect creation for getting people into an scheme without too much trouble and without having to provide a massive tax incentive to do it. Perhaps it wasn’t surprising that the tax rebate was halved in 2011 and then the kickstart was dropped in 2015. The most important element of the scheme was the accidentally-on-purpose design that used the power of inertia as a savings engine.

It has been a huge success. As of the end of May this year there were 3.117m people who were active or provisional members, and just 532,964 had opted out or closed their accounts. IRD figures show members, their employers and the government contributed $7.9b in the year to May this year. The scheme was worth $82.2b at the end of March, Reserve Bank figures show.

The genius of KiwiSaver is the opt-out rather than the opt-in, the use of default funds for that first creation of the account, using the IRD to administer the payments PAYE-style, and the seamless transfers from job to job. Pension and savings schemes designers all over the world now come to New Zealand to try to copy it.

READ:  The Friday Poem: The Word Event, by Nicholas Wright 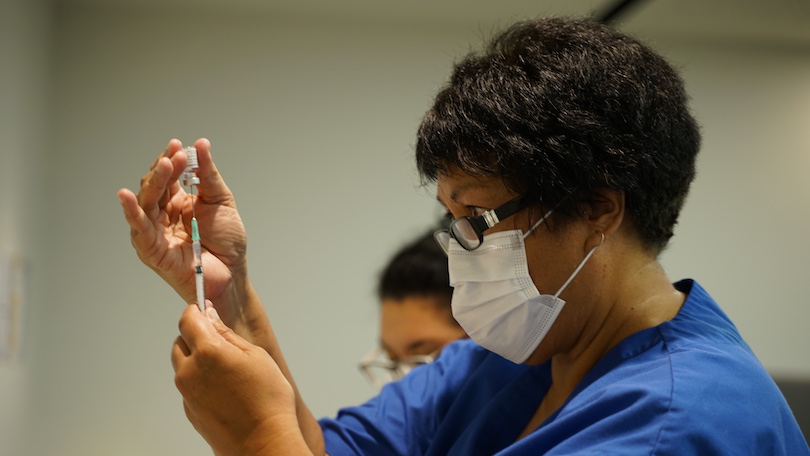 A vaccine being administered in South Auckland. (Photo: Supplied)

Could we nudge our way to herd immunity too?

Our vaccination plan is so far a fairly one size fits all, with a focus on using DHBs and primary healthcare providers, an online booking system and individual appointments with vaccinators. It is only now about to ramp up dramatically from around 20,000 shots a day to as high as 70,000 a day from August onwards.

I spoke to Dr Rawiri McKree Jansen, the clinical director of the National Hauora Coalition, about the rollout plans in this week’s episode of my podcast, When the Facts Change. He described himself as a friendly critic who would have preferred Māori and Pasifika to have been given priority in the rollout from the start, given the significantly and broadly more vulnerable status of these communities.

He would like to see a lot more nuanced and specific techniques, developed in consultation with Māori and Pacific community and other groups on the ground to ensure a stronger take-up of vaccination programmes.

So far, the plan is dependent on text messages linked to online booking systems for vaccination centres. That works for those communities already experienced and trusting of the “official” healthcare system and who have the resources, time and money to extract themselves from their family and work commitments to get to two appointments.

Just as encouraging take-up of vaccination by port workers in more remote centres was difficult, there is a risk those vulnerable Māori and Pasifika communities will not be reached, or be reluctant to engage.

There is a precedent for troubled vaccination programmes not getting to the right places in the right way. A Plunket programme to ensure widespread measles vaccinations for Māori families struggled, in part because its “nappies for jabs” and food voucher nudges were seen as paternalistic. In the podcast, McKree Janson is particularly critical of the scheme.

The first big trial of a different way to reach out to different communities will be next weekend at the Vodafone Events Centre at Manukau, where Manukau Institute of Technology students have organised their friends and family to book in for the three-day event. It is hoped 15,000 people will be vaccinated over the three days.

Two weekends ago, the Congregational Christian Church of Sāmoa in Porirua created a “wedding like” atmosphere at its church hall to bring in 1,000 in the community for their first shot of Pfizer. It was staged more as celebration and it was reported that nearly 1,500 turned up for their shots.

It will take a myriad of tweaks and trials and different wordings in different texts and church noticeboard messages to get over that 80% threshold.

We’d all better get nudging.