Sleep Week: Duncan Greive attempts to count the ways and places he has inappropriately nodded off.The Spinoff has been tossing and turning through a range of perspectives on sleep – read more Sleep Week content here. My parents told me I was such a poor and light sleeper that it’s a miracle my younger sister ever […]

Sleep Week: Duncan Greive attempts to count the ways and places he has inappropriately nodded off.

The Spinoff has been tossing and turning through a range of perspectives on sleep – read more Sleep Week content here.

My parents told me I was such a poor and light sleeper that it’s a miracle my younger sister ever made it onto this earth. Too much energy, howling through the night, a thoroughly unlikeable baby and toddler. Plus ça change.

What followed was a decade or so where I was basically “normal”. I slept at night. It wasn’t difficult. I did typical teen lie-ins, nothing extravagant. Certainly my now 20-year-old daughter, who could pull 12 hour shifts with ease, put me to shame. But something happened in my late teens that radically transformed my relationship with sleep, and it hasn’t ever recovered.

Put simply, I started to find sleeping at night extremely difficult. I would rest very lightly, waking at the slightest disturbance with a major convulsion and a sense of terror. Sometimes anchored in real-life stresses, just as often non-specific. As far as I can tell, this is not common, but not unknown – a significant number of my friends report a basically horrible relationship with sleep, often coinciding with the arrival of children. Others, like my colleague Mad Chapman, can do it anywhere for as long as they like, and it’s the waking that’s the problem. I struggle to sympathise.

What seems less common than bad sleeping is the corollary I’ve developed: the absolutely overwhelming and irresistible onset of sleep in entirely inappropriate scenarios. This is something which has persistently plagued me from my late teens to the present day. What follows is a brief (and necessarily incomplete) survey of places I have fallen asleep over the past 20 or so years. 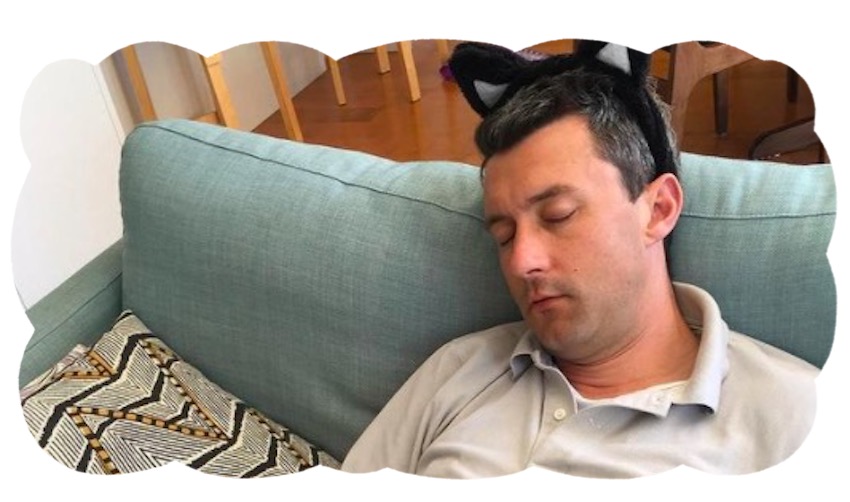 This is where it all began, in some ways. In my early 20s I was a young father, working as a postie (5am starts, very physical work, six days a week) and also desperate to be a music writer (late nights reviewing gigs for Real Groove, RIP). Very good preconditions for falling asleep at the wrong time in the wrong place.

More commonly it was noisy guitar bands which got the nod out. Mogwai and Jon Spencer Blues Explosion, both at the Power Station, both wildly loud, both had me slumped by the end. Probably the most notable was The Dead C, Port Chalmers noise monsters playing a hugely anticipated early ‘00s Kings Arms set. I had to be awoken after falling asleep – against a speaker. Looking back, some shows I reviewed with incomplete information. I still stand by my verdicts.

It’s hard to know where the line is between “entirely acceptable place to sleep” and “you absolute freak” in tertiary education. All those young people, still growing, learning how to feed and water themselves, burning the candle at both ends, often away from home for the first time – it’s unsurprising that sleep creeps up in odd places. Of course I slept in lectures. Who hasn’t? But tutorials tend to be a different animal.

During my first year, in some long-forgotten sociology paper, I was in a tutorial with about 10 people. We were discussing some theory and taking turns to give our interpretation on it and I was in the brutal race against time. I had nothing of consequence to say, obviously, and I could feel sleep’s hands on my shoulders, hauling me back. Just before it was my time to speak, I succumbed. I awoke to a room of faces on a spectrum between confused and aghast.

I mumbled, grabbed my bags and left, never to return. I did not pass. 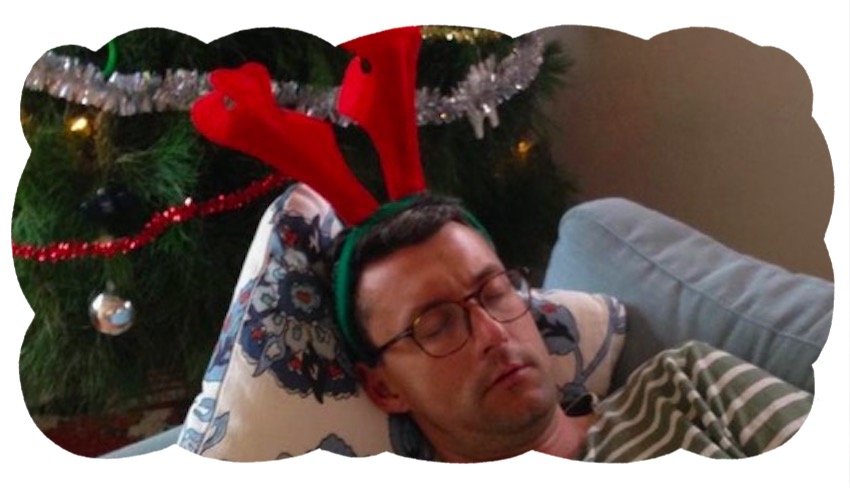 Duncan Greive has himself a very snoozy Christmas. Photo: Supplied by Duncan’s wife

I’ve been a critic longer than I’ve been any other type of writer, and while pop music is easily the form I’ve written most about, I’ve also engaged with and been a fan of live comedy and even indie theatre for periods. There’s a natural roll from the wildness of live music in rough venues in your teens and twenties, into seated and staged productions in your thirties. The act of admitting this would have disgusted my young self, but it also happens to be true.

It’s also true that the venues for these performances tend to be all of the following: dark, warm, low ventilation, the audience gets to sit and watch and not move around or talk for long periods – all strong predictors of me falling asleep at any time of the day or night. There’s probably no venue I have a higher hit rate for sleeping in than The Basement, Auckland’s subterranean delight. I used to try and cram three shows into a night during the comedy festival, and almost always fell asleep during the third (often kicking off at 10pm), and sometimes the second if it was dull. The only third show I know for sure I was awake right through was Chris Parker and Tom Sainsbury’s incandescent Camping, which is why I still believe it’s maybe the best thing I’ve seen in that perfect venue (perfect for everything but my mind-body).

I’ve also fallen asleep at many bigger budget productions, which is basically fine. The funniest and most-embarrassing part for my wife, who often has had the misfortune to accompany me to these things, is that grand old theatres were designed for shorter humans than me, and the stalls’ seats tend to have no headrest. So she’s had to sit quietly while my head slowly tips backwards at The Book of Mormon (people say it’s good, I couldn’t possibly comment) and John Cleese (falling asleep is my review and I stand by it). 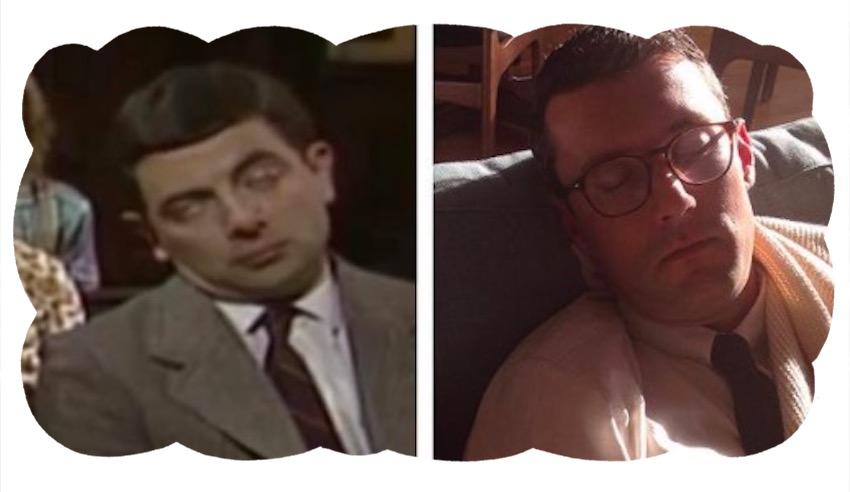 Duncan and his sleepy celebrity inspiration, Mr Bean. Photo: Supplied by one of Duncan’s enemies

Standards are changing fast in 2021, and falling asleep while wfh is basically mandated. But some situations are still inviolate. A friend shared The Spinoff’s downtown offices with his now very successful parking startup, when both our orgs were just little babies. He had a hugely important pitch to prospective investors in our “boardroom” (more accurately described as just a room).

The offices were already on the wrong side of the grungy/dilapidated divide, and he was, naturally nervous as hell about the stakes involved. My contribution was to fall asleep during the financial projections (which, being fair to me, are an exercise in pure fantasy at that point in a company’s lifecycle). He was not thrilled with me afterwards, but they closed the round, so it’s fine.

I have since nodded out during important pitches to our own clients (again, airless rooms and not talking), particularly when they have the gall to book them after lunch. Sleep is inextricably linked to my metabolism, and if I’ve had any kind of carb intake then it’s over. This also explains (without excusing) a consistent habit of falling asleep at conferences. At one in Sydney a couple of years ago my colleagues had to consistently nudge me awake from as early as 10am (the jetlag really got me), to the point where I stopped eating breakfast and started pouring even more black coffee than usual down my throat.

No dice – a whole room full of 50-odd media people I was desperate to impress saw me nodded out in a plastic chair while a world expert lectured us on something I really, really needed to know. 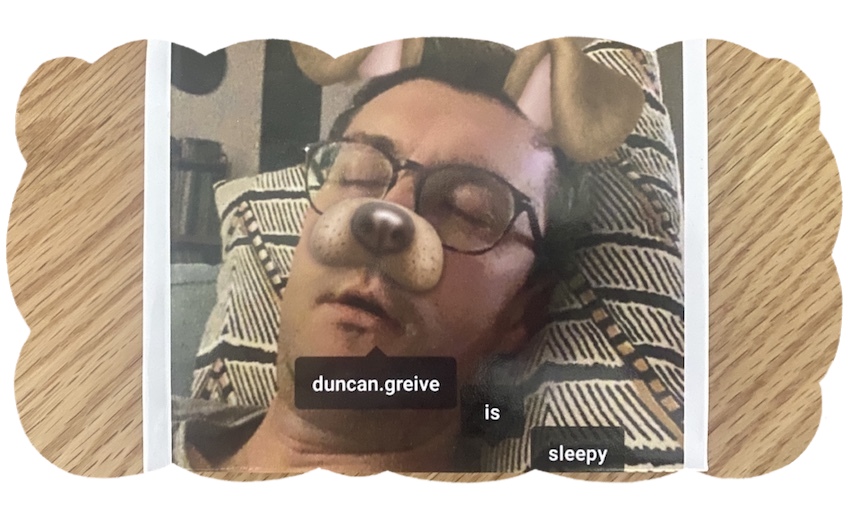 Pictures of Duncan sleeping were included in this rare 1/1 book. Photo: supplied by a disloyal friend

Outside of the above contexts is everything else. Falling asleep on a couch at home is time-honoured dad stuff, they’ll never take that away from us. I did it so frequently that my wife began cataloguing the instances on Instagram, in both stills and moving images, the latter often culminating in one of my daughters waking me up with a start, and me swearing. Eventually my sister-in-law – who cruelly but accurately, made the side-by-side of me and Mr Bean – compiled these into a short book, pictured above.

Other places I have slept were less routine. We had a mid-afternoon obstetrician’s appointment for my second daughter. The wait had been relatively long, and the waiting room pleasantly warm. I could sense I was in trouble – I always know when it’s coming, but feel powerless to resist, especially in spaces where a particular standard of behaviour is expected. We were eventually called, and the doctor things happened. About 10 minutes in, I started nodding out, over and over, much to the disgust of the medical professional involved. I remain acutely mortified about that one.

For all the hundreds of humdrum and embarrassing sleep incidents which have plagued my life, and the lives of my friends and family, the one I think about the most is the one which almost ended it. It combines many of the elements above, and yet it’s quite different. It was the early ’00s and I was still in my postie prime. It had been a long shift, stretching well into the afternoon. As was my custom after a long day biking mail up the long, harshly pitched hills of Remuera, I stopped in at Foodtown Greenlane for my daily treat: a pesto and cheese pullapart, $2.99. I ate it all.

Then I hit the Southern motorway, headed for Manurewa, where my then-partner and daughter were visiting whānau. The nod came on very fast, but I was trapped on the motorway and almost at my destination. I gave in. All of a sudden there was a huge screech of metal on concrete as I hit the median barrier and bounced off into mid-afternoon traffic. By sheer unaccountable luck I skated across three lanes and ended up on the Hill Road off-ramp. I pulled over, shaking and sweating but mercifully unharmed. After a few minutes, I tried to restart the car and discovered that it was done with all that.

I wandered up the road and borrowed a phone, and eventually I was scooped up. The loss of the car was the bigger deal at the time, but with more distance I now dwell upon just how unlikely it was that I walked away from that incident. Now when I feel the first breath of sleep on me at the wheel I pull over and trade driving, do star jumps or just have a good old-fashioned nap. A hot car on an afternoon with nowhere to be is about as good a place to sleep as I could hope for. Certainly much better than in bed, at night, which continues to be the place it most infuriatingly evades me.