Nothing can prepare you for the first weeks of parenthood. George Driver finally emerges from the wilderness.I’ve never worked so hard and been treated with such utter indifference. The first days of parenthood disappeared in a blur, defined by a never ending cycle of feeding, excretions and screaming. But vomit, shit and sleeplessness pale in […]

Nothing can prepare you for the first weeks of parenthood. George Driver finally emerges from the wilderness.

I’ve never worked so hard and been treated with such utter indifference. The first days of parenthood disappeared in a blur, defined by a never ending cycle of feeding, excretions and screaming. But vomit, shit and sleeplessness pale in comparison to the unrequited love of caring for a newborn baby.

I had only a vague idea of what to expect becoming a first-time parent. Television and a lifetime of overhearing parents complaining suggested recreation and a social life would belong to the “before times”. Our child would totally and indefinitely eclipse life as we knew it. But seeing young parents out in public, at cricket games and on camping trips, was evidence that there could be life after baby. There may be hope.

Fortunately, we had nine months to psychologically, and materially, prepare. However, we spent most of this period preparing for the birth. We spent weekends, evenings and hundreds of dollars on birthing courses and Plunket classes. We wanted to make sure that 24 hour period was as enjoyable, and endurable, as possible. We put somewhat less thought into what happened next. It was like we had nine months to prepare for the most important job of our lives – a job that we had no qualifications or experience for, that never ends and that you can’t quit – and we spent the entire time planning how to get to the office. Although I’m not sure you can ever really prepare for what comes next. And I had no fear of the job ahead. This was what I wanted. The very thought of meeting my unborn daughter filled me with overwhelming joy.

When Nieke was born, the sense of confusion and bewilderment was immediate. 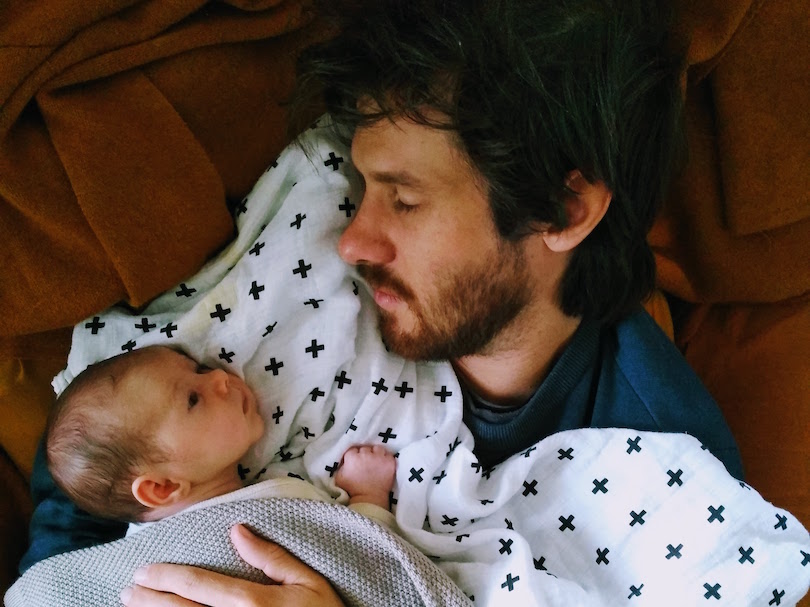 When I first met the lump of flesh pancaked on my partner’s chest – mouth gaping, eyes dilated and covered in blood and mucus – my first thought was “is that really our daughter?”. How could this tiny creature, with these strange reflexive puppet-like movements, be the person I had been dreaming of meeting for the past nine months? Based on TV, I expected to feel overcome with emotion. That this would be the happiest day of my life. But I felt bewildered and surprisingly flat. No one cried. In the surgical glare of the hospital ward, the miracle of life felt routine. Nieke was almost immediately taken from us for 10 minutes to be assessed and jabbed with vitamin k, while the obstetrician made smalltalk as she inspected my partner for tears (it turned out she wore my partner’s fashion label, ReCreate).

READ:  Walk shorts and dreams: Oh, to be a teacher in the 90s

An hour later, holding my baby as she fell asleep in the crook of my arm, some fatherly instincts began to stir. But I began to realise that, for me and many others, becoming a parent does not happen like flicking on a light switch. It’s a journey.

The cold and sinking feeling of dread began within hours of her birth. Her first screams shattered any notion that this might be a doddle. She mustered a level of volume and a pitch which seemed entirely out of proportion with her 3.3kg frame. It didn’t stop. We didn’t know why. We didn’t know what to do. So this is what my life is going to be like now, I thought, with a rising sense of fear.

Fortunately, that first night in Dunedin Hospital we received the constant care of saintly nurses and midwives (give these people a raise) who checked on us whenever they heard Nieke’s howls echoing down the ward.

The first big endorphins hit arrived the following day. The overwhelming love buzz erased the sleeplessness of the previous three nights. Rocking her in my arms was incomparable to anything I had known. I was giddy. But by the third day we were both beginning to falter. My partner, having had almost no sleep in the previous five days, went from superwomen to sobs. The first time she spoke to her family back in the Netherlands, she cried almost the entire call.

Nieke wouldn’t breastfeed and for the first weeks we were on a perpetual three-hour cycle of attempting to breastfeed, breast pumping and finger-feeding with a syringe and trying to settle our baby. We watched jealousy as other parents at the birthing home in Alexandra seemingly went on with their lives – eating meals together as their baby slept, going for walks together with their newborn. My partner didn’t go outside for five days.

Over time the mechanics of caring for a baby settled into a routine. The things I feared turned out to be no problem at all. Nappies, containing a small scoop of pumpkin soup-like poop, were not an issue. My partner valiantly took the night shift. To my shame, I’ve never slept so well in my life.

I had expected it to be hard, but that an overwhelming feeling of love and a steady flow of endorphins would make it not just endurable, but enjoyable. But those first six weeks were pure survival. The endorphins didn’t balance the books. We were running up a deficit. I wasn’t alone. There were more tear-filled calls to the Netherlands.

Rocking my baby to sleep, I’d become overwhelmed by the feeling that I’d rather be doing anything else right now. Every day felt like Groundhog Day and I wondered if I’d ever have time for things I loved in life again. There was no way to know and no way out. I recall at the end of the first week cowering in the haven of the bathroom, understanding why dark things can happen to people in those first weeks of parenthood.

After three weeks, my partner – the strongest and most unfailingly determined person I know – became a husk of herself. “I don’t know if I love her enough,” she said, a month into our new life. I had thought that having a baby would bring us closer together, but it felt like it had brought a wedge between us, irrevocably changing our relationship in unforeseeable ways forever. I didn’t vocalise these thoughts. There was no time.

But the hardest part was the complete indifference of our child. There was little in our relationship between feeding, sleeping and screaming. Her interactions with the world were jerky and instinctual, her expression oscillating through the gamut of human emotions, trying them on like a mask.

I lived for our walks together. Pacing the streets of Clyde with her strapped to my chest was ecstasy. It was something we could both enjoy. A glimmer of normalcy. But the best times we spent together were when she was unconscious in my arms. Staring into that tiny peaceful face restored me.

READ:  The alert level two rules have changed for delta – here’s what you need to know

Slowly our relationship evolved. Nieke began feeding on her own. My role as finger-feeder began to ebb away. We grew into parenthood. We began to fall in love. 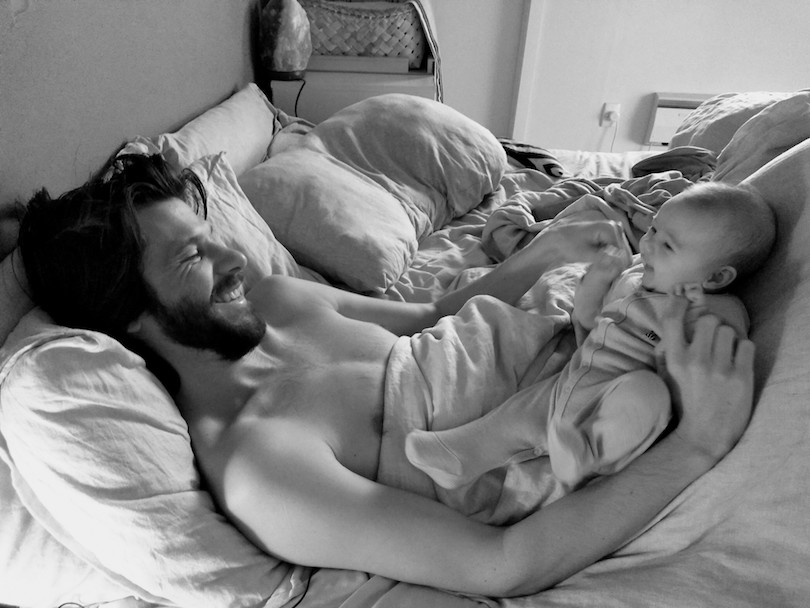 The biggest transformation happened about six weeks in, just as I prepared to go back to work. Her eyes began to focus. Her movements became more controlled and directed. Then she started to smile. It is impossible to convey how utterly life-changing it is to experience your child’s first smile. It felt like the first moment we shared a connection. There was a personality emerging. We could start to get to know each other. Then she began to talk – or at least try to – and it made me weak at the knees. The endorphins flooded in. My fear melted. I became utterly besotted. My partner and I felt closer than ever. I was beginning to see the light. I was in love.

Today is her hundredth day on earth, which we celebrate in her first lockdown (although, working from home in small town New Zealand, lockdown makes little difference). It should be a short enough time to remember each day of her life, but already it is disappearing into a blur. Those first six weeks feel like a lifetime ago. Two months ago she couldn’t communicate beyond a scream. Now she can play with us, she giggles, she can lie and talk ceaselessly for an hour in a series of coos and squeals. She looks into my eyes and strokes my beard. Two months ago I wasn’t sure how my life would continue. Now I can’t imagine a life apart. I’m slowly becoming a dad.

But I also know we have been incredibly fortunate. I can’t imagine the strain of parenting alone, or having to cope with other struggles along the way. For some, things don’t get better six weeks in ­– about 15% of mothers and 4.3% of fathers experience postnatal depression. If things don’t get better there are people who can help. You don’t have to get through it alone.